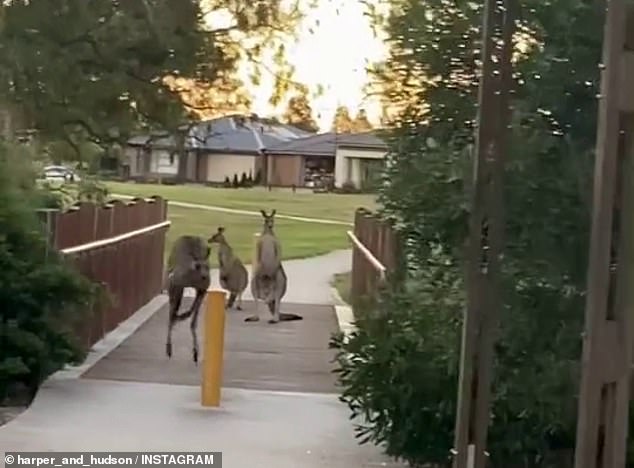 Who roo lookin’ at? Moment three kangaroos ‘guard’ a footpath in a suburban street – and even the Rottweiler is scared to pass

Two people out walking their dogs were shocked to find three territorial kangaroos ‘guarding’ a footbridge in a suburban park.

The Melbourne dog owners filmed their encounter and shared the footage to Instagram and TikTok, with the kangaroo seeming to intimidate the much larger big rottweiler and a husky in the park.

The kangaroos clearly were not interested in letting anyone past them.

As they woman films the kangaroos, the big one at the front slowly stands up and begins to hop towards the walkers and whimpering dogs.

‘Oh, oh, sh***,’ a woman filming says and the group walks quickly away, as if getting the message to ‘move along, nothing to see here’.

‘I hope you got that on video!’ the man with her jokes.

Footage captured by Mitchell Robinson’s family at South West Rocks on the NSW Mid North Coast, showed the large male marsupial shaping up to the father before hopping towards him and unleashing a furious attack.

The kangaroo can be seen hitting the victim with his paw and then kicking him to the ground.

Kangaroos are a common sight in towns like Canberra, surrounded by sprawling bush – but much less common in a metropolis like Melbourne.

In December Canberrans were sharing photos on social media of big male kangaroos in their local streets and even in their yards after several close calls in 2020.

The massive marsupials are believed to wander into suburban areas for food or water, especially when bushfires have reduced their availability.

Kellie Baker saw one particularly bulky kanga – ‘who looks like he’s on steriods’ – in a family-friendly cul-de-sac in Ngunnawal in Canberra, the ABC reported.

CIA raises controversy with a tweet on “Valentine’s Day”