Secondary school bosses have apologised after a female teacher was filmed blaming sexual harassment from boy students on the short skirts of the girls.

Young female pupils at Lytchett Minster School in Poole, Dorset, had complained they were having to cover their backsides with their books and planners as they walked upstairs to prevent boys from making ‘sexualised comments’.

But in a talk, which was filmed and later posted online, a teacher said there was ‘only one reason’ that the girls were ‘having to put your planner on your backsides’ and it is ‘because your skirt is too short.’

In the video, the female teacher adds: ‘Think girls, be sensible, we don’t need to have skirts that short.

‘When you are breaking school uniform (rules) and having your skirts far too short that is going to tempt boys to say selling things isn’t it?’ 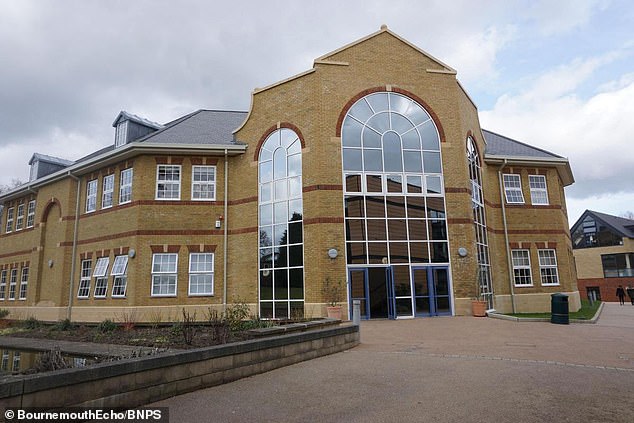 Young female pupils at Lytchett Minster School in Poole, Dorset, had complained they were having to cover their backsides with their books and planners as they walked upstairs to prevent boys from making ‘sexualised comments’

Turning to the boys, she added: ‘Boys, sorry I am not talking about all of you but we also know that some of you are making sill comments and sexualised comments.

‘Everyone has a right to come to school without being sexually harassed and without having sexual comments made about them.

‘We have all got a responsibility to make sure this doesn’t happen.’

The video posted online sparked outrage among female students at the school.

Many of the pupils today staged a demonstration on the school playing field against the ‘victim blaming’ video.

Girls have turned up to school wearing leggings instead of skirts in protest.

Headteacher Andrew Mead has apologised for the video and said the unidentified teacher who posted it ‘deeply regrets’ doing so.

The mother of a female student at the mixed school said: ‘Mentioning short skirts and sexual assault in the same video aimed at school children is wrong on so many levels.

One student said: ‘At worst, this highlights the deeply institutionalised misogyny that is still sadly so rife in today’s society. Victim-blaming culture can be so harming to young people and uniform policy has no place in a video intended to raise awareness of sexual assault and harassment. 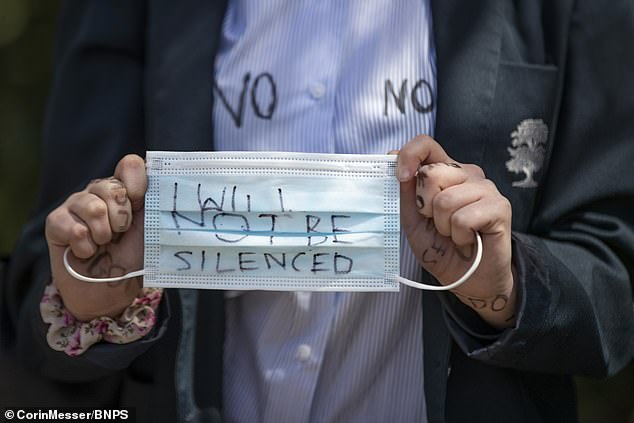 Many of the pupils today staged a demonstration on the school playing field against the ‘victim blaming’ video. Girls have turned up to school wearing leggings instead of skirts in protest

‘The only person able to prevent sexual assault/harassment is the perpetrator.’

The school video was made by staff in response to the ‘national rape day’ hoax circulating on the social media platform TikTok – an online prank reportedly started by a group giving tips on how to ‘get away with it’.

The police have been informed about the video and are investigating the matter.

Mr Mead: ‘We felt it was important to raise the issue of sexual harassment in society and in school. A video was made by the headmaster and a head of house seeking to address this serious issue.

‘A section of the video caused a lot of upset, which was clearly unintended.. A letter of apology was sent to all students and a follow up letter was sent to parents.

‘The member of staff who made the comment on the video is an exceptionally caring teacher. She deeply regrets the comment she made about the length of girls’ skirts and has apologised fully.

‘She recognises that no one ever deserves abuse on account of what they are wearing, and it was a mistake to link the two issues.

‘A number of students have chosen to make their feelings known by organising a protest on the school field. We have allowed this to take place. It is being supervised by staff. ‘

On the school’s letter to students, Mr Mead said: ‘We apologise for the distress caused by linking these two entirely separate issues.’

Lytchett Minster School is a state comprehensive school and sixth form with 1,400 pupils.