Some scientists have warned that Britons should rethink their Christmas gatherings despite official guidelines allowing families to mix in bubbles over the festive period.

Families are allowed to form an exclusive Christmas bubble made up of people from no more than three households between December 23 and 27 across the UK.

However the experts – who represent the segment of the scientific community that favours tougher restrictions at the expense of individual freedoms –  claim ministers have sent out the wrong message by telling people to simply ‘follow the rules’ and suggest it could lead to a third wave. 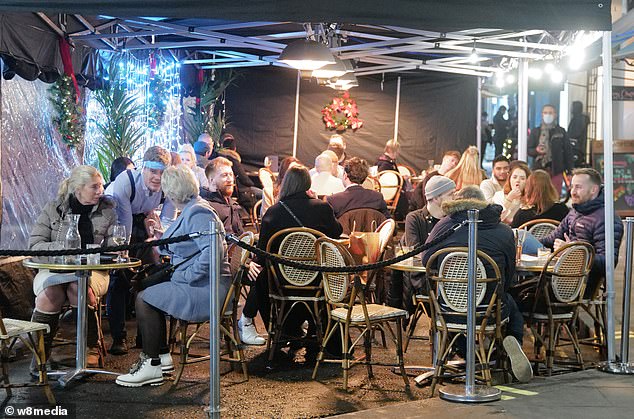 Scientists have warned that Britons should cancel their Christmas gatherings despite relaxed official guidelines that allow families to mix in bubbles during festive period. Pictured: People in Soho, London

Professor Susan of Mitchie, a psychologist at University College London and member of SAGE, described how the ‘best thing’ to keep loved ones safe is ‘not see them’.

Professor Stephen Reicher of the University of St Andrews and government advisor in the SAGE sub-group dedicated to ensuring the following of public health measures, warned that a plea by health secretary Matt Hancock to stick to the rules ‘missed the point entirely’. 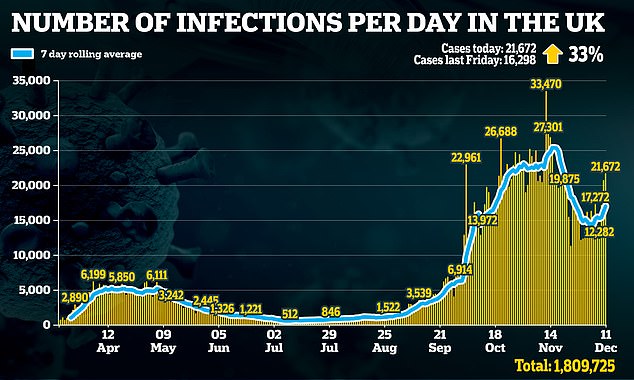 He warned of a large increase in infections if people followed the rules exactly and added: ‘The danger is when you say people can, you imply that it is safe and therefore they should.’

Professor Reicher said the government advice should present the choice to meet with loved ones but warn that it is ‘dangerous’ and should only be done if necessary.

It comes after teenagers have been blamed for the huge uptick in cases, prompting a mass testing programme to be rolled out in secondary schools in the worst-hit boroughs.

Christmas shoppers were warned by Downing Street on Friday to be careful as London teetered on the brink of being moved into Tier 3 amid a surge in coronavirus cases.

It means London is ahead of regions, such as the West Midlands, which are already in Tier 3 restrictions.

But ahead of what is expected to be a big shopping weekend on Saturday and Sunday, with Christmas just two weeks away, Prime Minister Boris Johnson’s spokesman urged shoppers to be cautious. 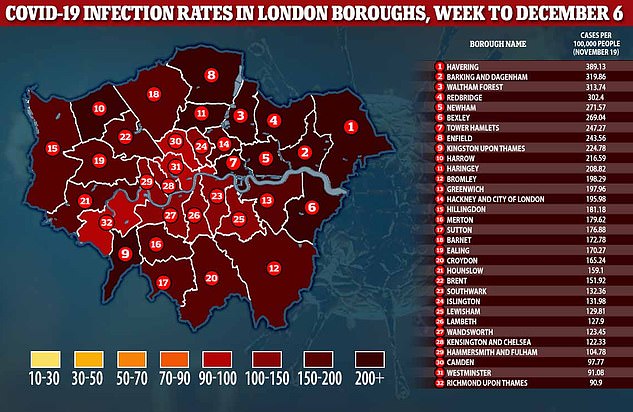 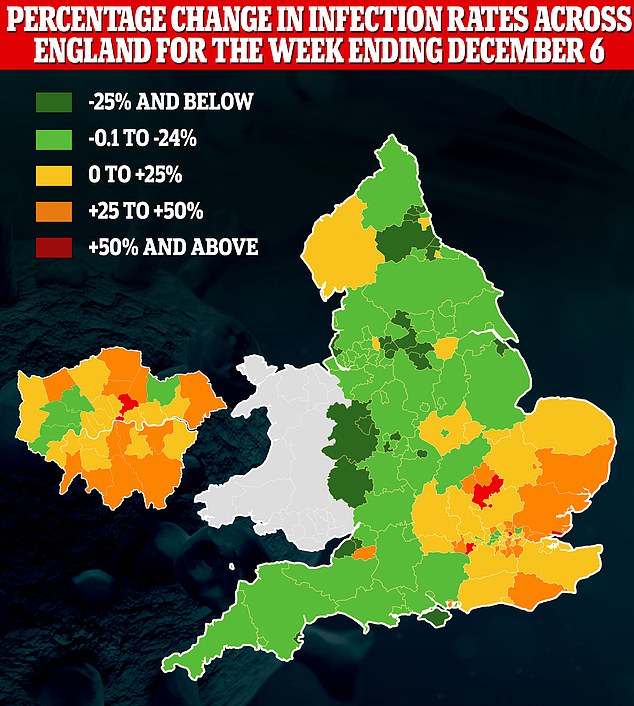 Asked by MailOnline if shoppers should be careful when out on the high street, he said ‘absolutely’.

Health Secretary Matt Hancock earlier on Friday hinted that Tier 3 measures were coming for London when he pointed to the capital’s rising cases and urged people to continue obeying the rules and not ‘push the boundaries’.

The newspaper pointed to how four of the top five areas with the highest infection rates in England – which sits on a commuting corridor to south-east London – are centred around the Kent borough of Swale and the Isle of Sheppey, where there are three prisons. One of those jails had one of the largest prison outbreaks of Covid-19 this autumn. 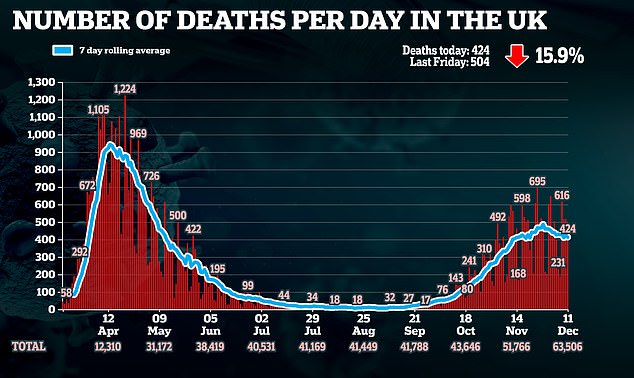 It came as Britain’s daily coronavirus cases increased by 33 per cent on Friday compared to seven days ago. A total of 21,672 new cases were announced, up slightly from 20,964 yesterday. 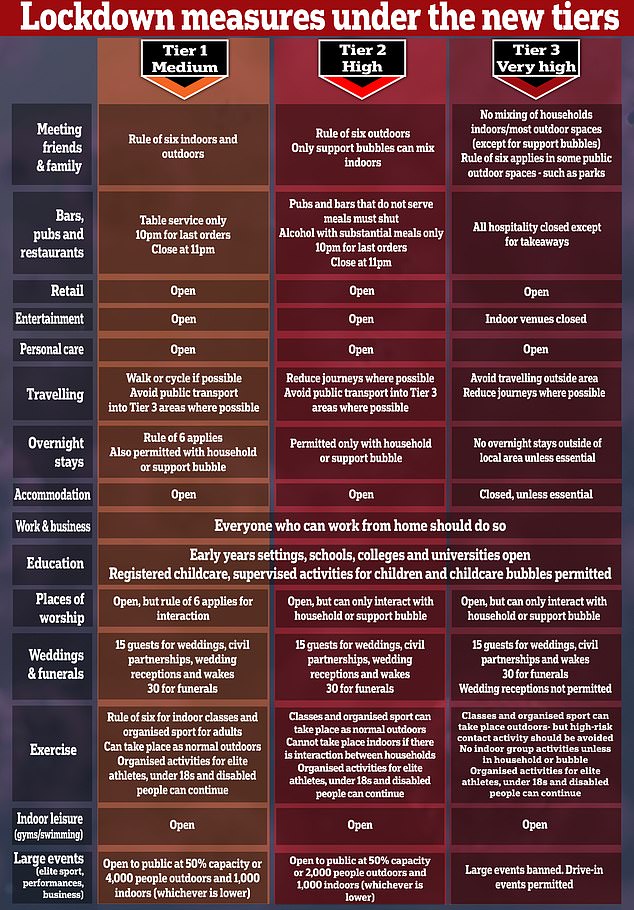 UK Hospitality Chief Executive Kate Nicholls said: ‘The impact of the restrictions on the hospitality sector has been so severe that it has effectively halved the country’s economic growth. Ours is the only sector seeing real negative growth. 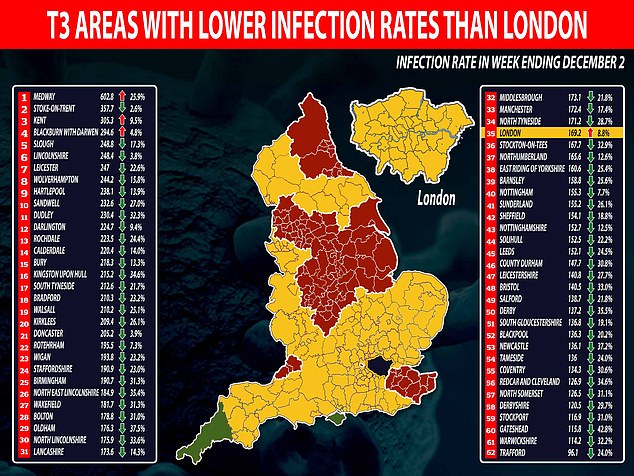 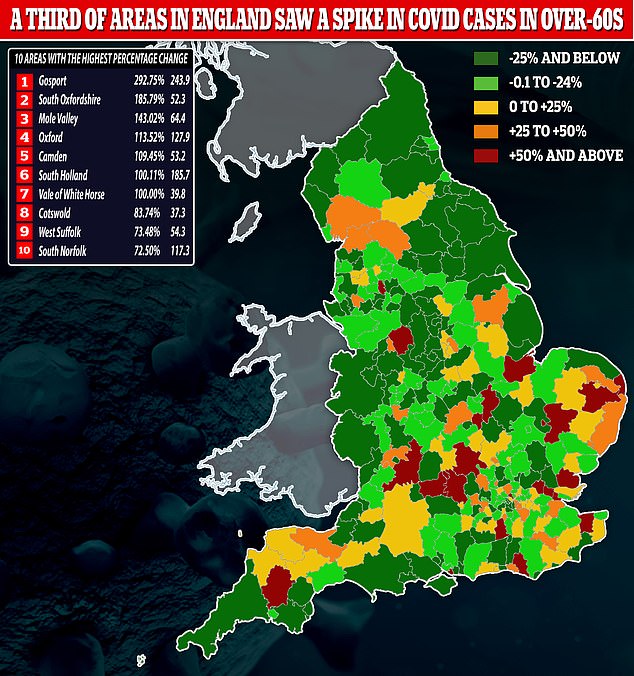 And data from the Covid Symptom Study app, which collects unofficial reports of test results and symptoms, estimates that other Tier Two areas including Berkshire, Wiltshire and Suffolk are also seeing cases on the up ahead of crunch decisions next week

Essex also appears to be teetering on the brink of a Tier 3 lockdown, with the county-wide infection rate jumping by a third in the last week, from 145.31 to 195.14.

In a joint statement with leader of Westminster City Council, London Mayor Sadiq Khan urged shoppers to ‘work together’ to control the spread of Covid-19 by wearing face masks and observing social distancing.

They said: ‘With cases rising in many parts of the capital, it is vital that we all work together to control its spread. Otherwise we may face tougher restrictions, which would greatly harm shops in the West End, our hospitality sector and the whole of London’s economy.

‘We are appealing directly to Londoners – when out shopping it is essential that you follow the rules.

‘You must wear a face covering in shops and keep a two-metre distance wherever possible.

‘We have worked to make the West End COVID secure with wider pavements – including making Regent Street car-free on Saturdays – and regular signage to help Londoners keep their distance.

Mr Hancock on Friday dangled the threat of tighter restrictions over the capital, amid rising cases.

So, we’ve got to stick at it and we have got to keep this virus suppressed whilst we get the roll-out (of the vaccine) going.

‘So, my message to everybody in London is ‘please respect the restrictions, respect what needs to be done, keep yourself and your family and your community and your city safe’.’ 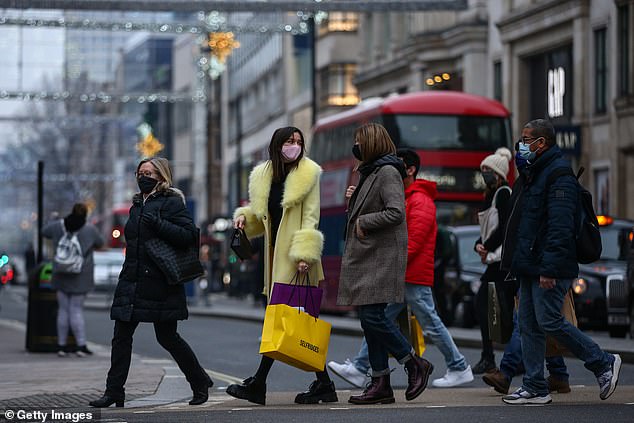 Mr Johnson’s spokesman urged the public to follow the safety guidelines, saying, ‘I think we have been clear throughout the pandemic

Asked whether London could go into tougher restrictions on BBC Radio 4’s Today programme, he said: ‘This is an incredibly important moment on the march out of this pandemic, but we’ve still got a march to go this winter.

‘People need to keep respecting the rules and try to live in a way that if you have the virus infects as few people as possible, and we are seeing rising numbers of cases in parts of Essex, parts of Kent and parts of London in particular and we’ve got to keep this under control.

‘The whole strategy all along has been to suppress the virus, protecting the economy, education and the NHS until a vaccine can make us safe.

‘That strategy is clearly working because a vaccine is starting to be able to keep us safe, but the suppress the virus bit is still absolutely critical.’

JOLEON LESCOTT: John Stones has got his confidence back and he's looking unbeatable