Up to two dozen people in Britain could be deliberately infected with a weakened form of coronavirus as part of a trial to develop a vaccine against Covid-19.

New York-based company Codagenix plans to begin experiments of its vaccine in London by the end of the year.

The trials will be held in the same facility as ‘challenge trials’ – in which people who have been vaccinated are deliberately exposed to the virus to test the jabs.

Codagenix has previously been reported to be joining the experiment. Details of exactly how the trial of the live attenuated vaccines will be structured have not yet been announced. 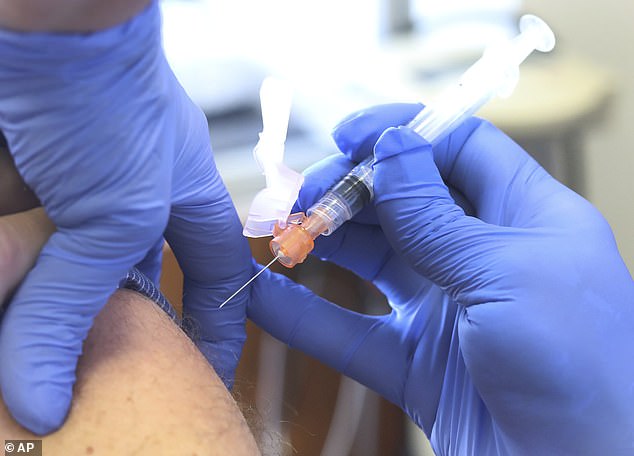 Live attenuated vaccines work by stimulating the immune system in the same way that real Covid-19 would, but by relying on viruses unable to cause severe illness (stock image)

The version of the coronavirus used in Codagenix’s vaccine is thought to multiply at around a thousandth of the rate of the wild virus (Pictured: The viruses in petri dishes, with the wild one on the left seen to be multiplying faster)

The vaccine is likely to be trialled at a 24-bed clinic in Whitechapel, East London, where participants will be quarantined, The Times reports.

The hVIVO clinic will also host ‘challenge trials’ of coronavirus vaccines, in which people who have had the jabs will be deliberately infected.

Although it is unclear whether Codagenix will take part in this, medical news website BioWorld reported in July that the company was planning to do so.

The company is understood to still be seeking approval from the UK’s drugs regulator to go ahead with its tests.

Codagenix’s vaccine will work by using a slowed-down version of the coronavirus and injecting it into participants.

Covid-19’s ability to cause infection and serious disease relies on the virus multiplying rapidly inside the body before the immune system can stop it.

As it does this it can take over the lungs and blood vessels and cause the body to scramble to get rid of it, causing the tell-tale symptoms of fever and coughing, which are the immune system’s attempts to cook or expel the viruses.

Codagenix’s weakened form of the virus, however, can only multiply about one thousandth as fast as the wild strain (0.1 per cent of the speed).

The company developed the weaker virus by changing its genetic code using a computer programme so that it looks exactly like the wild virus.

Normally the coronavirus uses easy-to-decode sections of genes which allow it to hijack living cells and use them to multiply itself. The modified virus, however, takes significantly longer to achieve the same result.

This means it cannot get a head-start on the immune system and the body should be able to destroy it – and form a memory of how to destroy it – before it can cause illness.

Robert Coleman, the company’s CEO, told The Times: ‘We recode a portion of the virus’s genome so that it’s slowly translated by the human host.

Codagenix intends to make its vaccine one that will be administered by a nasal spray, as the flu jab is given to children.

British scientists will be the first in the world to carry out a controversial study where volunteers are deliberately infected with coronavirus in the race against time to find a vaccine, it was revealed today.

The ‘challenge trial’ — which could rapidly accelerate the approval of experimental jabs — is said to be set to begin in January at a clinic in east London.

Participants will be infected with a dose of SARS-CoV-2, the virus that causes Covid-19, a month after being jabbed with a vaccine, according to the Financial Times.

The study, reportedly funded by the government, could help drug-makers test their Covid-19 vaccines without having to wait for volunteers to naturally catch the virus in the community.

Between 100 and 200 participants are expected to be recruited for the trial, which is being run by a US advocacy group that has campaigned for human challenge trials throughout the pandemic.

It’s unclear which vaccine candidate will be tested, but drug giants AstraZeneca and Sanofi have both insisted they aren’t taking part. MailOnline has approached Imperial College London — Britain’s other jab front-runner — for comment about its involvement.

Around 2,000 potential volunteers have signed up to take part in challenge studies in the UK.

They have done so through 1Day Sooner, a US-based advocacy group which is made up of 100 leading experts including Nobel Prize-winning scientists.