Scotland 4-0 Faroe Islands: Che Adams off the mark in thumping win for hosts


Che Adams netted his first goal for Scotland as they thrashed Faroe Islands at Hampden and claimed a first World Cup 2022 qualifying victory.

With Denmark thumping the Austrians 4-0 in Vienna, the win moved Scotland up to second in the table.

Steve Clarke’s side are unbeaten in three games as they bid to reach next year’s finals in Qatar.

While the opening 2-2 draw with Austria was regarded by many as a good point in the circumstances, the subsequent 1-1 draw in Israel had put pressure on Scotland.

They had never lost to the Faroes in nine previous meetings and anything less than victory was unthinkable, even this early in the qualifying campaign.

Scotland made their intentions clear from kick-off. Before the game was a minute old, Fraser had already cut in front the left and tested the goalkeeper, but his weak shot was easily held.

An early goal was coming, though, and McGinn added to his already impressive haul of international strikes when when he took on Kieran Tierney’s cut-back first time and finished low into the net.

But it was not all one-way traffic. Craig Gordon had to produce a fabulous save to tip over Brandur Hendriksson’s vicious shot from just outside the area. 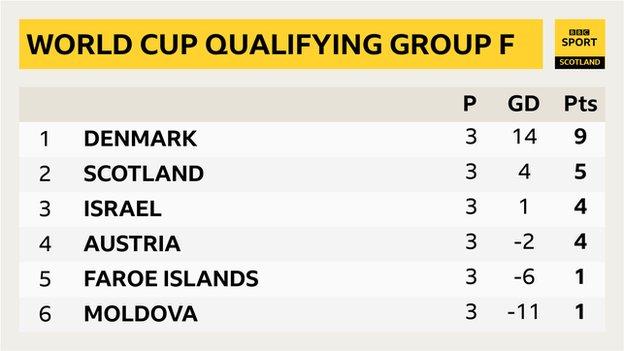 Scotland continued to grow in confidence, though. Adams placed an Andrew Robertson free-kick into the arms of the goalkeeper; Scott McTominay’s header took the paint off the woodwork; and Callum McGregor and Tierney had further half chances.

A spilled cross by Gordon offered a brief chance for Faroes forward Joan Simun Edmundsson, but the ball bounced off him back to the grateful goalkeeper. After that the home side turned the screw.

Tierney and McGinn combined again to increased Scotland’s lead. The ubiquitous Arsenal defender’s cross was pinpoint for McGinn to score his 10th international goal, all of them during Clarke’s tenure.

Then Southampton striker Adams scored a terrific third for Scotland, and his first in his third cap. He turned a defender, rolled the ball in front of him, and picked his spot inside the near post.

Hibernian forward Kevin Nisbet made his debut from the bench before the fourth arrived from the head of Fraser.

But it was not an altogether polished performance for Scotland, and the visitors had chances.

Hendriksson again threatened, whistling a shot just past, then Patrik Johannesen found a gap in defence and Gordon once more had to be alert to tip his header over the bar.

Man of the match – Kieran Tierney

It was a curious looking line-up and a somewhat experimental one as Clarke still tinkers to find a winning formula.

The defence was changed for the third group game in a row, with McTominay moved back following his midfield role on Sunday, and Fraser moving to the right wing in place of Stephen O’Donnell.

Gordon, in goal ahead of first choice David Marshall, made a number of fine saves. And Adams continues to impress since deciding to pledge allegiance to Scotland over England.

Ultimately, Clarke’s side got the job done with a number of players shining, but there was still concern at times defensively, with the visitors finding the same space for pot shots outside the box as Israel did.

Scotland do not resume their World Cup qualifying campaign until September, when the triple header brings away games against Denmark and Austria either side of a home game with Moldova.

Before then, Scotland’s next competitive match will be their opening game of Euro 2020 against Czech Republic.