Ex-FDA chief Scott Gottlieb warned on Sunday that ‘most’ unvaccinated Americans will contract the COVID Indian ‘Delta’ variant and it will be the ‘most serious virus of their lives’.

Dr. Scott Gottlieb, 49, warned that those without a vaccine are risking hospitalization as numbers show that vaccines are working at keeping people out of the hospital.

‘This virus is so contagious, this variant is so contagious that it’s going to infect the majority — that most people will either get vaccinated or have been previously infected or they will get this Delta variant,’ Gottlieb said on CBS’s Face the Nation on Sunday. 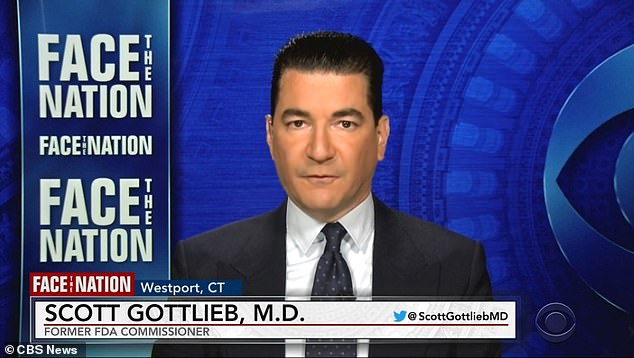 ‘And for most people who get this Delta variant, it’s going to be the most serious virus that they get in their lifetime in terms of the risk of putting them in the hospital.’

Gottlieb estimates that 97 percent of hospitalizations, along with most deaths, are among the un-jabbed.

With 50 percent of the population vaccinated and about a third of Americans previously infected with the virus, those who are unvaccinated and who have never before had Covid remain most at risk.

On Sunday, Los Angeles became the first county to renege on its reopening and require masks again as the Delta variant, first identified in India in December, spreads throughout the United States.

Gottlieb stressed that cases are likely to be undercounted.

‘And that’s only about 15 or 20 percent of people who will become infected.

‘We’re not doing a lot of routine screening right now,’ he said.

‘Unless you work for the New York Yankees, you’re not getting tested on a regular basis. So I think that this Delta wave could be far more advanced than what we’re detecting right now in our ascertainment.’

He pressed for more high-quality masks, such as the N-95 kind.

‘Quality of mask is going to make a difference with a variant that spreads more aggressively like Delta does, where people are more contagious and exude more virus,’ he said.

‘Trying to get N95 masks into the hands of vulnerable individuals in places where this is really epidemic I think is going to be important, even in cases where they’re vaccinated, if they want to add another layer of protection.’

The Mount Sinai-educated doctor also warned that certain regions are more vulnerable than others.

‘If you’re in parts of the country where vaccination rates are low and there hasn’t been a lot of viruses spread, and that’s a lot of parts of the rural South, I think it’s much more vulnerable,’ he said.

The former FDA chief, a Republican nominated by President Donald Trump in 2017, sits on the board of Covid vaccine maker Pfizer.

NBC's TV viewers for the summer time Olympics is down a whopping 45% from the Rio video games in...

With Bearish Weekly Close For Bitcoin Price, Is No One Buying BTC? 2021