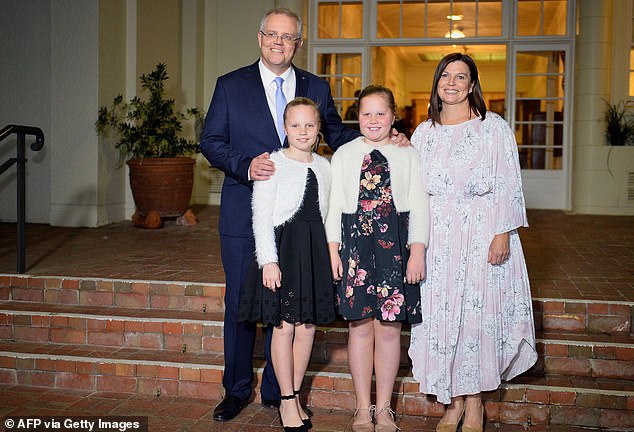 Scott Morrison says dealing with the Covid-19 pandemic has left him with more silver hair and praised his wife for her constant support through a tough 2020, during an interview with Hollywood actor Hugh Jackman.

The prime minister opened up on his family and personal life during a charity segment for men’s mental and emotional health on Triple M on Monday.

Jackman, a special guest on the breakfast show, asked Mr Morrison how he was coping with the stress of leading Australia through the pandemic.

‘Who is your best mate that you can tell anything to?’ he asked.

Mr Morrison made no hesitation in naming his wife Jenny, saying that she had been a constant anchor and source of support.

‘And I tell you what, I couldn’t have done anything in the last 12 months, certainly in the last 30 years, without her.’

Prime Minister Scott Morrison (pictured, with wife Jenny and daughters Lily and Abbey) says the Covid-19 pandemic has left him with more silver hair and praised his wife for her constant support, during an interview with Hugh Jackman

Jackman said it seemed leaders aged ‘triple the number of years’ because of the how stressful handling coronavirus has been.

Mr Morrison laughed off the observation saying his wife noticed he had grown a fair few more silver hairs.

‘But she likes that, so there you go,’ he said. ‘There’s an upside to even that.’

Mr Morrison said his daughters, Lily and Abbey, were always happy to keep him in check when things got a bit too much.

He called to mind when thousands of swimmers ignored social distancing pleas and flocked to Bondi Beach in March, prompting the first lockdown.

‘I was telling someone the other day, earlier in the pandemic, everyone turned up at the beach at a pretty unhelpful moment and I said “stop it, it’s ridiculous”.’ Mr Morrison said.

The doting father said friends and family were vital and that he could understand the frustration of millions of Australians who would not be spending Christmas with all their family.

On Monday, 15 new Covid-19 cases were reported in Sydney’s Northern Beaches, bringing the total to 83.

Mr Morrison said he had great staff and that his daughters, Lily and Abbey, were always happy to keep him in check when things got a bit stressful

More than 270,000 residents between the Spit Bridge and Palm Beach have been told to stay indoors until Wednesday.

Thousands of families have been forced to cancel Christmas travel plans as most of the states cut off NSW, and the others forced them into quarantine.

‘I know with so many other families at the moment, particularly with events in the last 48 hours, and seeing those travel plans disrupted, I know that will be incredibly upsetting and frustrating,’ Mr Morrison said.

‘But I think at the same time people understand these precautions are going to be necessary to avoid something worse.

More than 270,000 residents between the Spit Bridge and Palm Beach have been told to stay indoors until Wednesday (pictured, testing at Bondi Beach on Sunday)

Londoners are fleeing them en masse due to tightening coronavirus restrictions