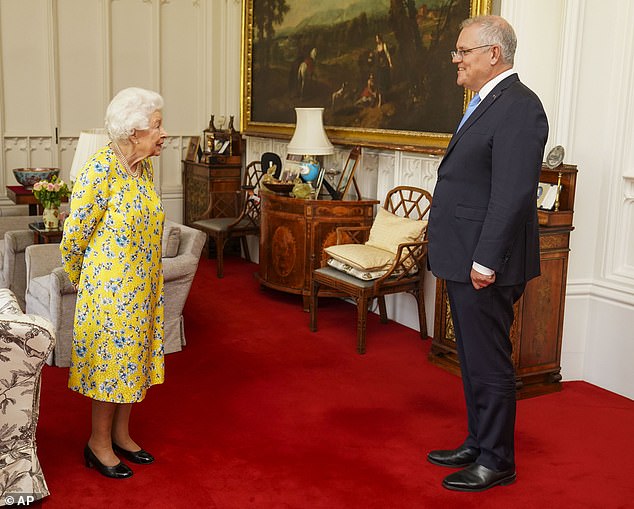 Australian Prime Minister Scott Morrison has had an audience with the Queen at Windsor Castle.

The meeting, where Mr Morrison wore a crisp suit and blue tie and the monarch opted for a summery yellow dress, took place just hours after a UK-Australia trade deal was announced.

In a historic deal that was Briton’s first negotiated from scratch since leaving the European Union, Aussie producers will be able to export more of their world-leading beef, lamb and cheese to the UK and young people will be able to move more freely between the two countries.

The agreement was thrashed out by Scott Morrison and Boris Johnson over a three-hour dinner in Number 10 Downing Street on Tuesday night where the friends feasted on Scottish salmon and Welsh lamb, washed down with Australian wine.

The distinguished pair appeared to hit-it-off as they were photographed smiling and exchanging pleasantries in the Oak Room.

The meeting, where Mr Morrison wore a crisp suit and blue tie and the monarch opted for a summery yellow dress, took place just hours after a UK-Australia trade deal was announced

After today’s breakthrough announcement, Britons under 35 will be allowed to live and work in Australia for three years without farm work under the terms of a UK-Australia free trade deal which will hugely boost exports for Aussie businesses by removing tariffs.

‘I said we’d wait for the right deal and I think we’ve got the right deal, Boris,’ said Mr Morrison as he welcomed the agreement which will boost the Australian economy by $1.3billion a year.

The historic deal means Aussie producers will be able to export more premium beef, lamb and cheese to the UK – a major windfall after China slapped Australia’s beef producers with a litany of arbitrary bans.

Young people will be able to move more freely between the two countries.

The bombshell change to visas will delight young Britons who are forced to carry out three months of gruelling work on a rural property if they want to stay in Australia for a second year on a working holiday visa. Young Australians will have the same rights to work in the UK for three years.

The move will have a huge impact on Australian farmers who are dependent on 10,000 British backpackers a year to pick fruit and vegetables – but a new agriculture visa, allowing British farmers to work in Australia, will help offset the impact.

‘There is a great opportunity for young people from both the UK and Australia to move and operate in different countries.

‘That builds capacity, in both countries, with that easy engagement,’ he said in London on Tuesday.

In a huge win for Aussie farmers, the trade deal will liberalise Australian imports of beef, lamb, cheese and sugar into the UK, which became free to set its own trade policy after the Brexit process ended in January.

Australian beef producers currently face a 12 per cent tariff and are only allowed to send 3,761 tonnes of meat to Britain, while lamb exports were capped at 13,335 tonnes.

The deal will eliminate UK tariffs on Australian wine, swimwear and confectionery such as Tim Tams.

Meanwhile, Australia will be able to import cars, whisky, machinery and medical drugs and other products without the existing five per cent tariff.

Mr Johnson said the agreement marked a ‘new dawn’ in the countries’ relationship and joked about the exchange of similar goods.

‘Our new free-trade agreement opens fantastic opportunities for British businesses and consumers, as well as young people wanting the chance to work and live on the other side of the world.’

Beijing has blocked Australian seafood, beef, barley and wine after the government called for an inquiry into the origins of Covid-19 last year.

The Australian PM said the deal was ‘the most comprehensive and ambitious agreement that Australia has concluded.

‘Our economies are stronger by these agreements,’ he said.

The UK is Australia’s fifth largest trading partner, with two-way goods and services valued at $36.6 billion, and its second biggest investment partner.

‘What’s more, they are missing out on eating the best lamb chops, the best steak in the world and washing it down with the best glass of Australian wine that you could imagine,’ he said.

After visiting the Queen, Mr Morrison will now head to Paris to hold talks with President Emmanuel Macron.