Scott Morrison has revealed who his priorities are for the Covid vaccine, after being one of the first people in Australia to receive the jab.

The prime minister said the ‘average Joes and Jills’ who work in aged care and hotel quarantine will come first.

‘There are many average Joes and Jills who work in aged care and disability care and who have disabilities and live in aged care facilities or who do hotel quarantine – they are the priorities,’ he said. 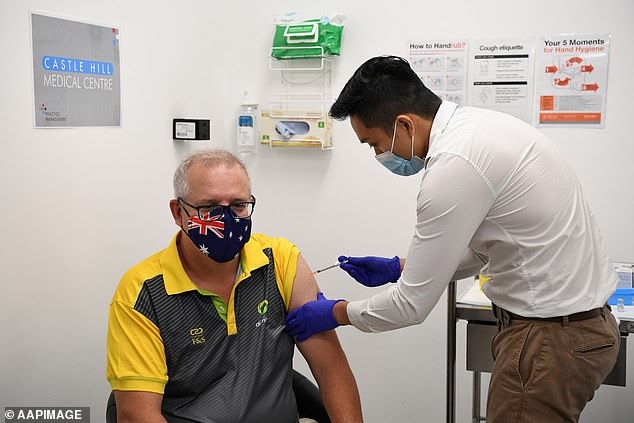 Mr Morrison was one of Australia’s first Covid vaccine recipients, minutes after it was given to an aged care resident who survived World War II.

There was cheering and clapping as Jane Malysiak, 84, who emigrated to Australia from war-torn Poland when she was 13, received the Pfizer vaccine shot.

Mr Morrison sat next to a gleeful Ms Malysiak as she received her jab, which she described as ‘lovely’.

While posing for photos, Mr Morrison encouraged Ms Malysiak to give a peace sign for the cameras, telling her it means ‘V for vaccine’.

But Ms Malysiak hilariously botched the peace sign, and inadvertently threw up the universal sign for ‘up yours’ by turning her hand the other way around. 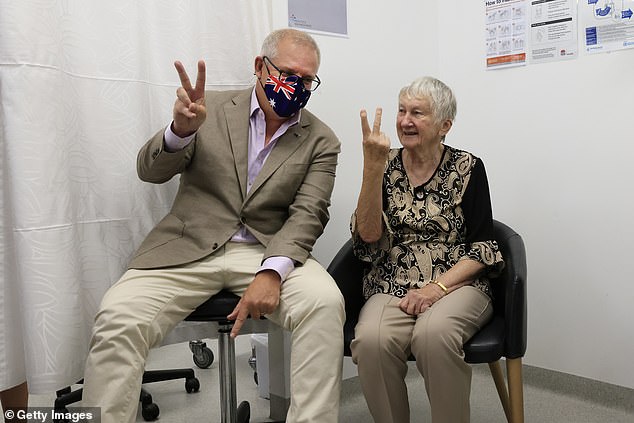 Ms Malysiak hilariously botched the peace sign, and inadvertently threw up the universal sign for ‘up yours’ by turning her hand the other way around 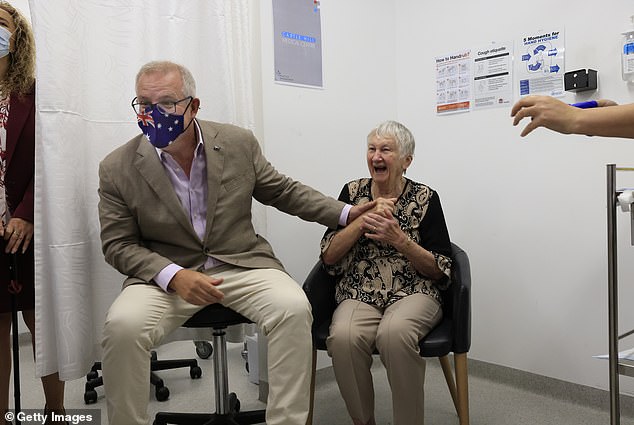 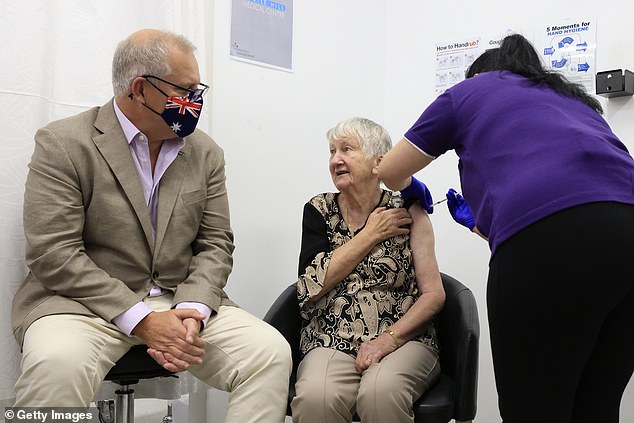 Mr Morrison sat next to a gleeful Ms Malysiak as she received her jab, which she described as ‘lovely’

Ms Malysiak was in good spirits throughout the process of getting her jab, telling nurses she was happy to be receiving the vaccine.

‘It is an exciting day for Australia. We have been planning and preparing for many, many months and now we have got to this point where we can kick it all off today,’ Mr Morrison told reporters.

‘We need to start with those who are most vulnerable and are on the frontline and that’s why they will be taking the first vaccines today.’

Mr Morrison joined the Chief Medical Officer Paul Kelly and the Chief Nursing Officer Alison McMillan in getting the Pfizer jab on Sunday, along with a small group of aged care staff. 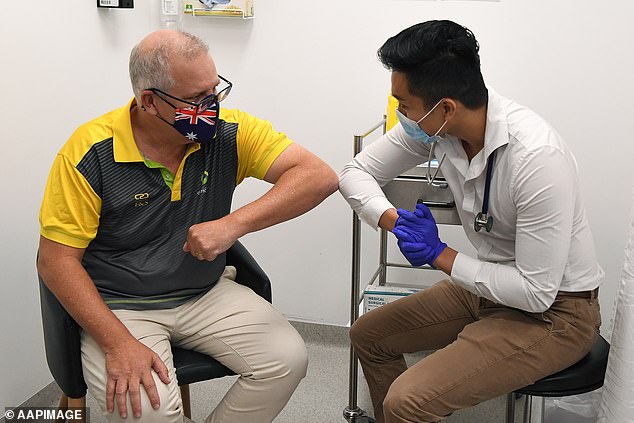 Jesse Li (right), the doctor who gave Mr Morrison his injection, said it was the ‘honour and privilege of my life’ 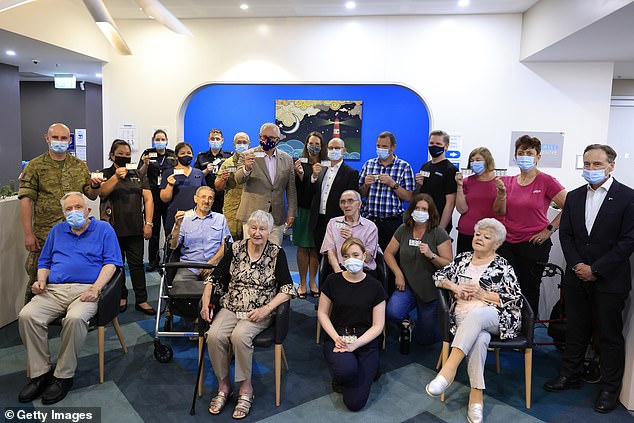 Mr Morrison joined the Chief Medical Officer Paul Kelly and the Chief Nursing Officer Alison McMillan in getting the Pfizer jab on Sunday, along with a small group of aged care staff

Mr Morrison heaped praise on Ms Malysiak, telling the press she is a ‘great Australian’ who is now a part of Australian medical history.

‘Jane Malysiak has seen many historic days in Australia over the course of her more than 80 years of life,’ he said.

‘She grew up in Poland in the Depression … she went through the Second World War, she came to Australia, she built a wonderful life here and is still living it gloriously today.

‘She’s seen more things than most of us have, and she’s taking part in what is a very historic day for our country, and I want to thank you, Jane, for being with us here today.’

Before getting their jabs, Mr Morrison and Ms Malysiak chatted about her love of gardening.

‘I’ve started doing some gardening in the nursing home,’ she proudly told the prime minister.

Mr Morrison thanked the 84-year-old for getting vaccinated before meeting another aged care resident who was also receiving his jab.

‘It’s just a little prick and that’s it,’ he said. ‘It means I now can go out, without any worries.’

An elated Mr Morrison was the last of 12 people to receive the jab on Sunday. 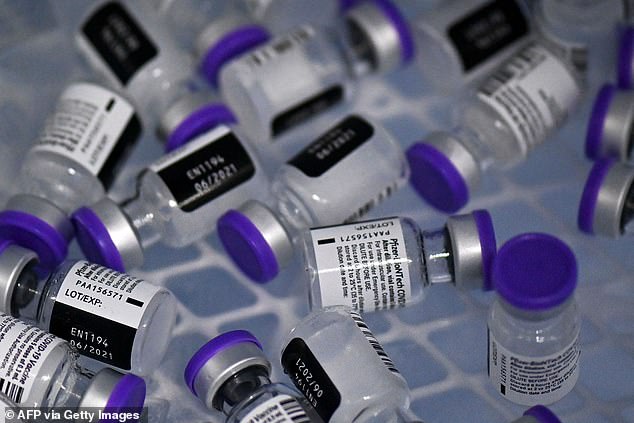 A small group of aged care residents, staff and frontline health care workers are also set to get the jab today 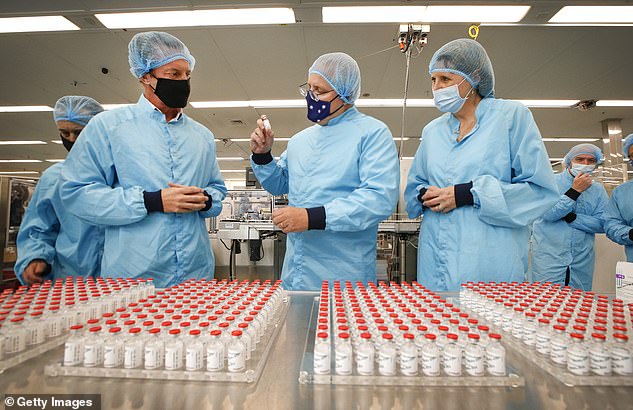 ‘You all thought there’s be tatts there, didn’t you?’ he quipped as the arm of his T-shirt was lifted by a doctor to deliver the vaccine.

Jesse Li, the doctor who gave Mr Morrison his injection, said it was the ‘honour and privilege of my life’.

‘I’m glad I got the job done, I was a bit nervous inside. You know, my heart was pounding,’ Dr Lee told said.

‘But at the end of the day, he’s one of the first recipients of hopefully everyone in Australia.

‘I’m glad he was happy to do it in front of the cameras and inspire confidence (in the vaccine)’.

From Monday, the main roll out will begin and will see 678,000 Australians on the frontline of the pandemic getting their first round of vaccinations.

Health Minister Greg Hunt said Australia’s highest leaders being among the first people to get vaccinated will instill public confidence in the vaccine.

‘There was a very strong focus on the need for key leaders, not the parliament, not the cabinet, not even the leadership group, but a cross-party group, to provide that confidence (to Australians),’ he told ABC’s Insiders program. 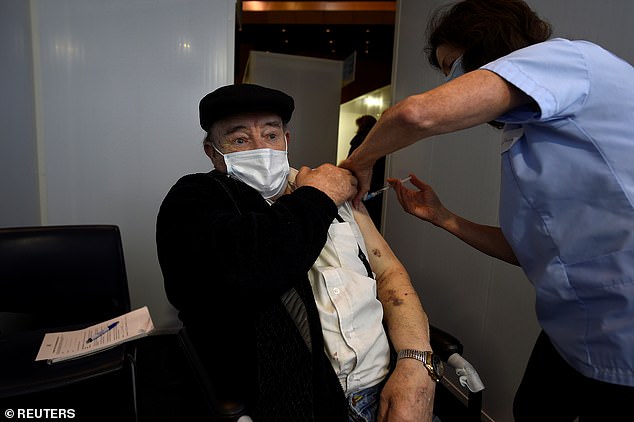 From Monday, 678,000 Australians on the frontline of the pandemic will get their first round of vaccinations. Pictured: a man getting the  jab in Ireland

‘Research shows that people want to see that if we believe it’s safe, then that will give them greater confidence. That has been a view in many places around the world.’

Mr Hunt said Australia is ‘about to embark on one of the most important public health initiatives’ in the nation’s history.

‘I am very emotional because a year ago we did not know that this would be possible,’ he told 7News.

He confirmed that he and the head of the Department of Health and former chief medical officer Brendan Murphy will get the alternative AstraZeneca jab at a later date.

Mr Hunt wants as many as people as possible to be vaccinated, but declined to put a figure on what percentage he wanted to see.

‘We’ve provisioned so that … every Australian has access to vaccines. We’ve secured 150 million doses of a range of vaccines,’ he said.

Two doses are required at least three weeks apart and the vaccine must be stored and transported at -70C.

A flying squad of 500 nurse immunisers will be dispatched around the nation to vaccinate aged care and disability residents.

Mr Morrison says federal and state health officers are monitoring whether to make shots compulsory for some workers.

The roll out comes a day after thousands of protesters attended anti-vaccination rallies in Sydney, Melbourne and Brisbane.

Victorian police used pepper spray on some protesters when they moved beyond cordons and at times, appeared to lose control of the crowd, an AAP photographer on scene said.

While some people were covered in pepper spray, crowds chanted, ‘freedom, freedom’. 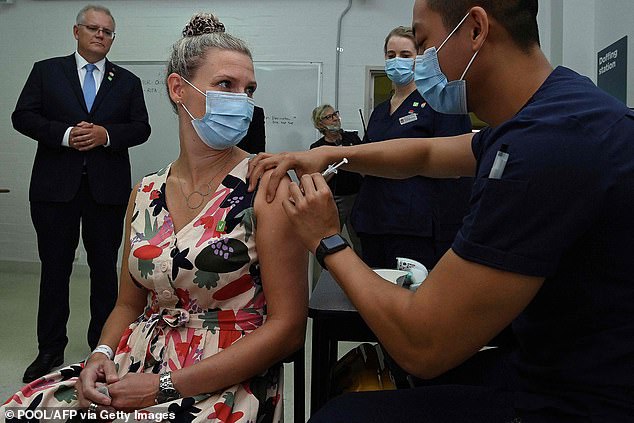 Two doses are required at least three weeks apart and the vaccine must be stored and transported at -70C. Pictured: a simulation of the COVID-19 vaccine process in Sydney on February 19

The rally started peacefully but as speakers addressed the crowd ‘people started getting pretty fired up’, the photographer said.

Speakers made comments such as ‘God’s on our side’ and ‘it’s a fight between good and evil’.

At Sydney’s Hyde Park, controversial celebrity chef and conspiracy theorist Pete Evans was among the hundreds of protesters.

Evans, who has recently been banned from social media, addressed the crowd in Sydney.

Protesters marched with placards with slogans such as ‘herd immunity of vaccines is a scam’ and ‘your body, your choice’.