Prime Minister Scott Morrison has slammed modern-day cancel culture and identity politics and also urged people not to expect handouts from the state.

In a speech at a United Israel function on faith and community in Sydney on Thursday night, he said Australians should take responsibility for themselves.

‘Where we once understood our rights in terms of our protections from the state, now it seems these rights are increasingly defined by what we expect from the state,’ he said. 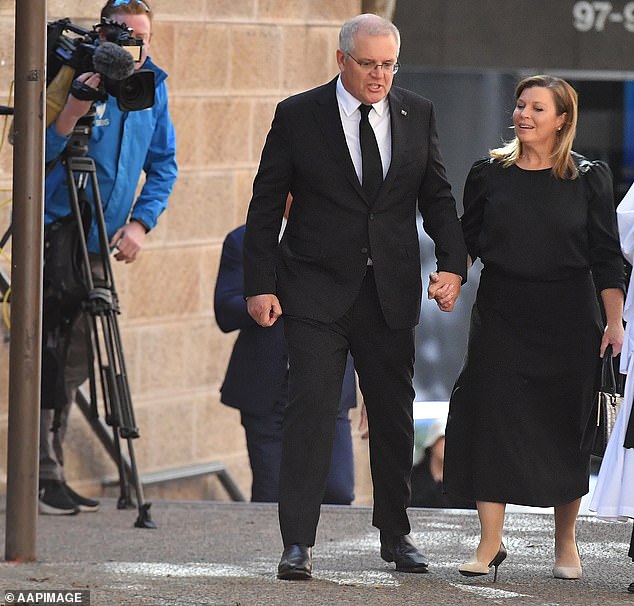 ‘As citizens, we cannot allow what we think we are entitled to, to become more important than what we are responsible for as citizens.

‘Now together and individually we are each responsible for building and sustaining community, and we each have something unique to bring. Because community begins with the individual, not the state, not the marketplace.’ he said.

Last month Mr Morrison urged Australians on the dole to accept a job with 54,000 roles going begging in regional parts of the country.

The prime minster also took a swipe at social media platforms where he believes abuse is undermining the Australian community and railed against ‘identity politics’ where a group of people of the same gender, religion, race or social background bands together with a political agenda.

‘I would also argue we must protect against those forces that would undermine that in community, and I don’t just mean, as I’ve recently remarked, the social and moral corrosion caused by the misuse of social media, and the abuse that occurs there.

‘But I would say it also includes the growing tendency to commodify human beings through identity politics,’ he said.

Scott Morrison (pictured at a church service) highlighted individual and personal responsibility, its relevance to citizenship and the role of the state in society

‘We must never surrender the truth that the experience and value of every human being is unique and personal,’ he said.

‘You are more than your gender, your sexuality, your race, your ethnicity, your religion, your language group, your age.

‘All of these contribute to who we are and the incredible diversity of our society, and our place in the world, but of themselves they are not the essence of our humanity.

‘When we reduce ourselves to a collection of attributes, or divide ourselves on this basis, we can lose sight of who we are as individuals – in all our complexity and wholeness. We then define each other by the boxes we tick or don’t tick rather than our qualities, skills and character.’

‘Because if you see the dignity and worth of another person, another human being, the beating heart in front of you, you’re less likely to disrespect them, insult or show contempt or hatred for them, or seek to cancel them, as is becoming the fashion these days,’ he said.

Earlier this week, Mr Morrison’s personal faith came under the spotlight when details of a speech he gave to a national Christian conference earlier this month were made public.

The prime minister, a Pentecostal, spoke of social media being used by ‘the evil one’ to undermine society and described identity politics as ‘corrosive’.

He also spoke of doing God’s work and he sometimes used the Evangelical practice of ‘laying on of hands’ while embracing people who had suffered from trauma or natural disaster.