A Scottish schoolgirl’s message in a bottle – in which she says she ‘hates boys’ and likes to collect Blu Tack – has washed up in Norway 24 years after it was sent out to sea.

Joanna Buchan, 34, was just eight-years-old when the plastic Sprite bottle was dropped from a fishing boat off Peterhead, Aberdeenshire, in 1996 as part of a school project.

The doctor, who has since moved to New South Wales, Australia, was left stunned this week when she heard it had been found some 800 miles away on the island of Gasvaer, in Norway.

She had been contacted on Facebook by Elena Andreassen Haga in July 2020, who found the bottle while on holiday with her son Eliah, aged eight. However Joanna did not see Elena’s message – which was hidden in the ‘message requests’ folder – until two days ago.

The former schoolgirl’s letter describes her pet dog Dougal, who will soon be ’15 in dog days’, making him ‘one hundred and something!’, as well as her upcoming school projects on ‘post offices’ and the much-loved children’s book Charlotte’s Web.

She also mentions her love of Pogs, which were small animated cardboard discs children collected as part of a huge 90s craze.

She hilariously signs off the letter: ‘I love sweets. By the way I hate boys.’

Joanna said she was stunned when she recognised her extremely neat handwriting and has since spoken to her teacher at the time, who was delighted the message was found – telling her she was ‘so proud’ to see she had become a doctor. 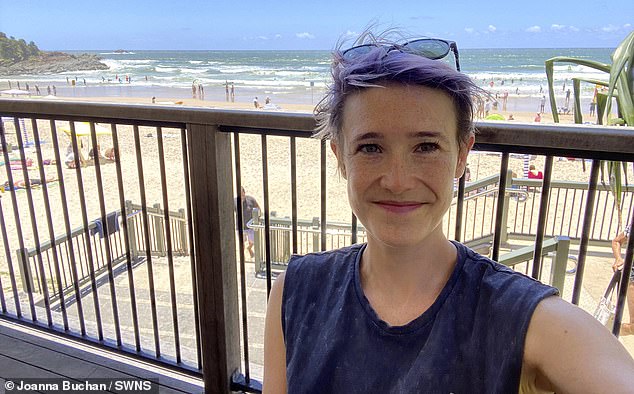 Joanna Buchan (pictured), 34, was just eight-years-old when the plastic Sprite bottle was dropped from a fishing boat off Peterhead, Aberdeenshire, in 1996 as part of a school project 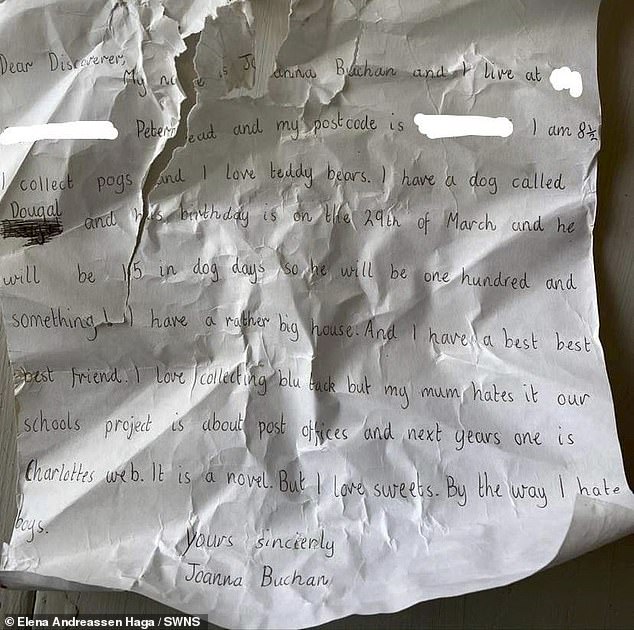 The former schoolgirl’s letter (pictured) describes her pet dog Dougal, who will soon be ’15 in dog days’, making him ‘100 and something!’, as well as her upcoming school projects on ‘post offices’ and the much-loved children’s book Charlotte’s Web 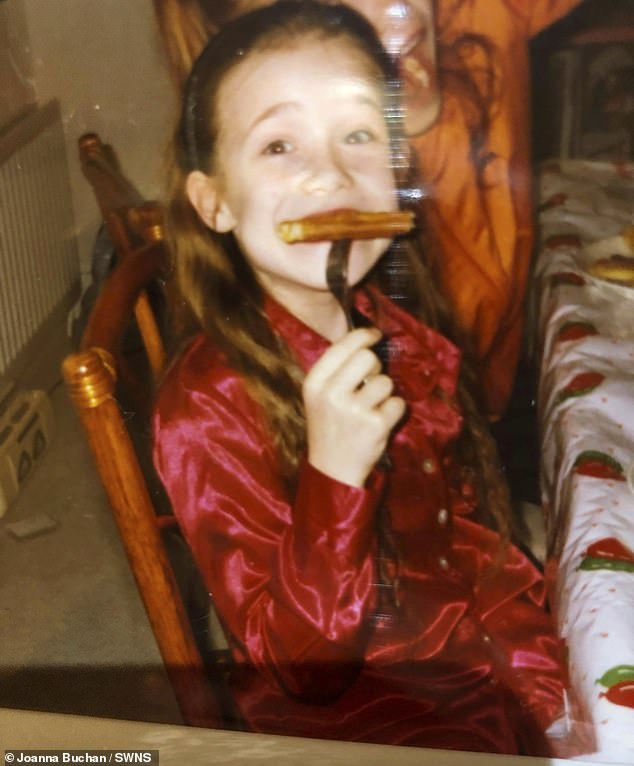 Joanna (pictured as a child) hilariously signed off her letter: ‘I love sweets. By the way I hate boys.’

Doctor Joanna said: ‘At first I didn’t remember the message in a bottle, but then I started to have a vague recollection of a project we did at school.

‘It was a dusty memory but once I saw the letter I knew right away it was me, I recognised my handwriting, which is definitely not as neat now.

‘I just died with laughter when I read it back especially the way I ended it with ‘by the way I hate boys’.

‘I really can’t believe it survived 25 years in the North Sea.

‘It was just a curled up bit of paper stuffed into an old Sprite bottle, so I am so shocked it turned up on a small uninhabited island in Norway.’

Joanna was in class P4 at Peterhead Central Primary School when she sent the letter.

The missive also included details about her ‘rather big house’, and her love of teddy bears.

She said: ‘My teacher from the time got in touch with me and was really chuffed it had been found. 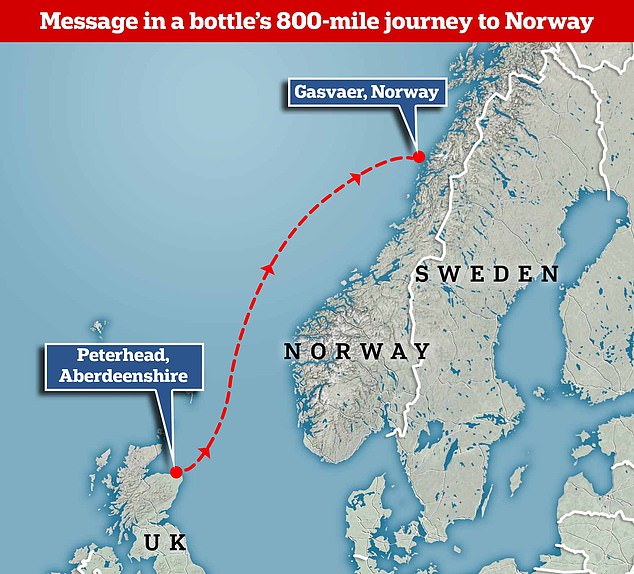 Joanna’s message was placed inside a plastic Sprite bottle in Peterhead, Aberdeenshire, in 1996. It was found in Gasvaer, Norway, in 2020

‘One bottle was found early on after the bottles went out to sea but there haven’t been any others found for 25 years.

‘The letter is what eight-year-old me thought was important.

‘I talk about how I liked to collect Blu Tack and it made me remember how I used to make little animals out of it when I should have been doing my schoolwork.

‘I was so shocked when I got the message it had been found and just kept thinking what an earth would I have written about.

‘Elena’s dad actually found a message in a bottle there 60 years ago so when she was on holiday there she thought they’d have a look to see what they could find.’

Mother-of-one Elena, 37, an electronics store manager from Stavanger, Norway, said she and her son were looking for trash to pick up when they noticed to the bottle.

She recalled: ‘We found the bottle, and immediately saw there was something inside

‘I was very excited, you never know – is it just from another small island in the area, or what could be inside

‘My son did not understand why this was so exciting.

‘I sent Joanna a message the same day we found the bottle, and forgot about it after that holiday. 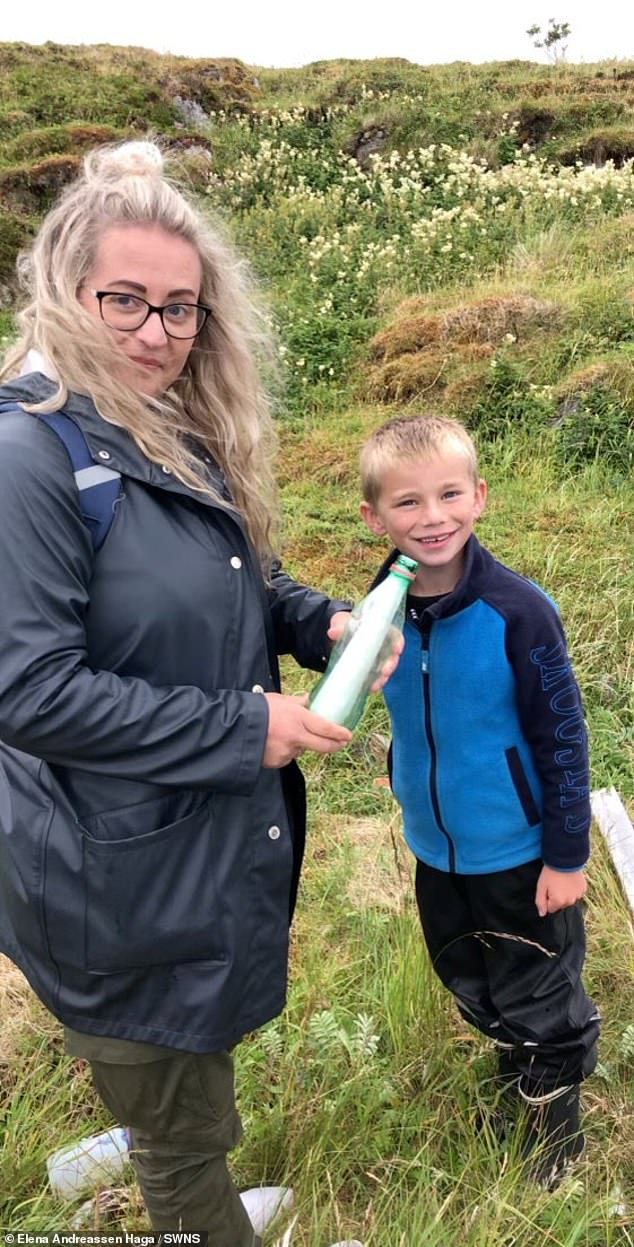 Joanna had been contacted by Elena Andreassen Haga in July 2020, who had found the bottle while on holiday with her son Eliah, aged eight (pictured together with the bottle). However Joanna did not see her message request on Facebook until two days ago

‘And suddenly late one evening here in Norway my Messenger app notified me she had seen the message.

‘I didn’t immediately understand who she was and then the conversation lit up when I sent her the picture of the letter.

‘She asked if she could tag me in her post on Facebook, and the rest just piled on from there.’

Joanna’s class teacher at the time, Edith Skinner, has since got in touch with her to say how delighted she was the bottle had been found.

In a message to Joanna she said: ‘I just wanted to say how delighted Jane Bruce and l both were this afternoon to hear that your wee story in the bottle had been found.

‘We both remember doing that project as well as the writing lesson prior to the messages being put in the bottles to be taken by Mrs Bruce’s husband Gary to be cast overboard on his fishing trip.

‘I think one bottle was discovered quite soon afterwards but l haven’t of any others.

‘The fact you mentioned our next project ‘Charlotte’s Web’ brought back many happy memories of the lovely art work on the wall.

‘Your handwriting is just as l remember – neat and beautifully formed.

‘You were always so conscientious and a delight to teach.

‘I am so proud to hear you are a doctor and I do hope you look back on your childhood years at Peterhead Central School with affection and happy memories.

‘It was truly a special time for us all. Take care of yourself and live your best life.’

The Kings are interested in Jerami Grant, Domantas Sabonis and Myles Turner

Two best Chinese stocks to keep an eye on

Two best Chinese stocks to keep an eye on