Prime Minister Boris Johnson has chosen his beloved Jack Russell cross, Dilyn, to star on the front of his Christmas card which he has jointly sent out with his fiancee, Carrie Symonds.

It is a bit of a break from tradition since many of his predecessors, including Tony Blair and David Cameron, put themselves and their (human) loved ones in the spotlight.

Prime Minister Boris Johnson has chosen his beloved Jack Russell cross, Dilyn, to star on the front of his Christmas card which he has jointly sent out with his fiancee, Carrie Symonds 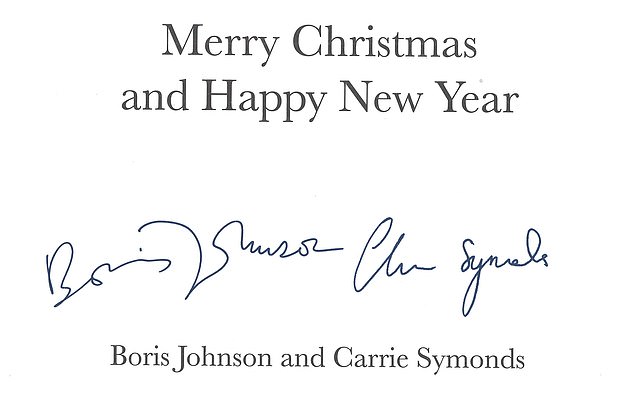 Many of Mr Johnson’s predecessors, including Tony Blair and David Cameron, put themselves and their (human) loved ones in the spotlight

When Boris caught Covid it was feared Dilyn had it too, because he started wheezing and refused to go for walks.

But he looks healthy now as he obediently poses in front of No 10 with tinsel round his neck.

‘Merry Christmas and Happy New Year,’ reads the message inside the card, signed by Boris and Carrie, the mother of his seven-month-old son, Wilfred. 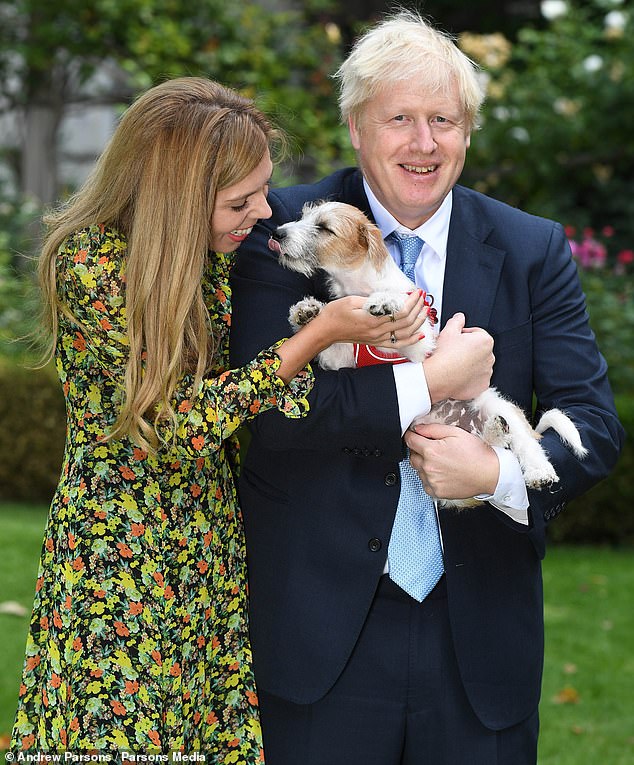 Pictured: The Prime Minister Boris Johnson and his partner Carrie Symonds with the No10 dog Dilyn in the gardens of Downing Street

She has decided to forsake her traditional family Christmas at Sandringham for the first time in 33 years.

But, as she and Prince Philip remain at Windsor over the festive period, the Queen will no doubt have been alarmed to learn about the disquieting death of an owl killed in a trap on her beloved Norfolk estate .

Its inadvertent demise was called to the attention of the RSPCA and the local constabulary.

The incident happened in May but only became the subject of an investigation this month.

‘We were contacted by a man wishing to inform us that on May 29 this year he found a Little Owl caught in a Fenn Trap on the Sandringham Estate next to Flitcham Barns,’ says the National Anti-Snaring Campaign.

The baby owl died at Sandringham in May after it was caught in a Fenn Trap, which is designed to kill pests such as rats and squirrels

It claims a Fenn Trap , which is designed to kill pests such as rats and squirrels, can also put stoats at risk — contrary to the Spring Traps Approval Order which came into operation last April.

The Estate insists that its tenants punctiliously observe the spirit as well as the letter of the law. ‘As a working Estate, Sandringham adheres to all the appropriate standards and regulations required,’ a spokesman tells me.

Norfolk Constabulary confirms that everything is in order. ‘There haven’t been any further occurrences,’ a spokeswoman tells me, explaining that ‘words of advice’ were given by the RSPCA to Sandringham’s head [game] keeper.

An RSPCA spokesman said: ‘We were very concerned this poor animal had died in this trap and gave advice to make sure it didn’t happen again.’ 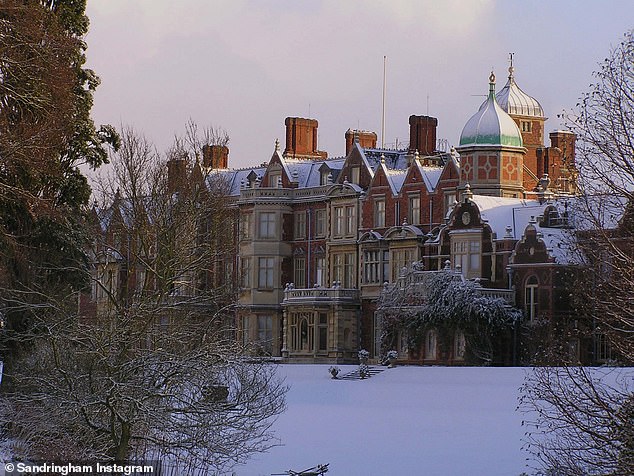 The RSPCA said it was ‘very concerned,’ over the death of the baby owl, and words of advice were given to workers on the estate

A spokesman for the British Association for Shooting and Conservation emphasises that Fenn traps are ‘perfectly legal’ and have an important role on a 20,000-acre estate such as Sandringham.

‘You’re not allowed to use them to target stoats,’ the spokesman tells me, going on to explain that, judging by the photograph of the dead owl in the trap, ‘appropriate precautions were taken’.

However, he adds, mishaps can happen.

A point with which HM would surely concur.

‘King of clubs’ Robin Birley is furious with Boris Johnson.

Birley had to shut his Mayfair private clubs, 5 Hertford Street and Oswald’s, for a third time this year, when the capital entered Tier 3 yesterday.

‘I am not going to dwell on how this Government is crushing restaurants in London,’ he tells members.

‘It staggers me that one can visit a packed department store, but cannot go out to a restaurant.’

Boris used to visit Hertford Street, but he may want to give it a wide berth for a while when it reopens.

Aitken returns to the Old Bailey

‘I was presiding over the Central Criminal Court Annual Carol Service,’ he tells me.’

‘It was surprisingly well attended.

‘The judges and lawyers obviously know the law about social distancing.’

Mary’s Christmas in a festive bubble

Large parties may be cancelled this Christmas but socialite Lady Mary Charteris won’t let it dampen her spirits. 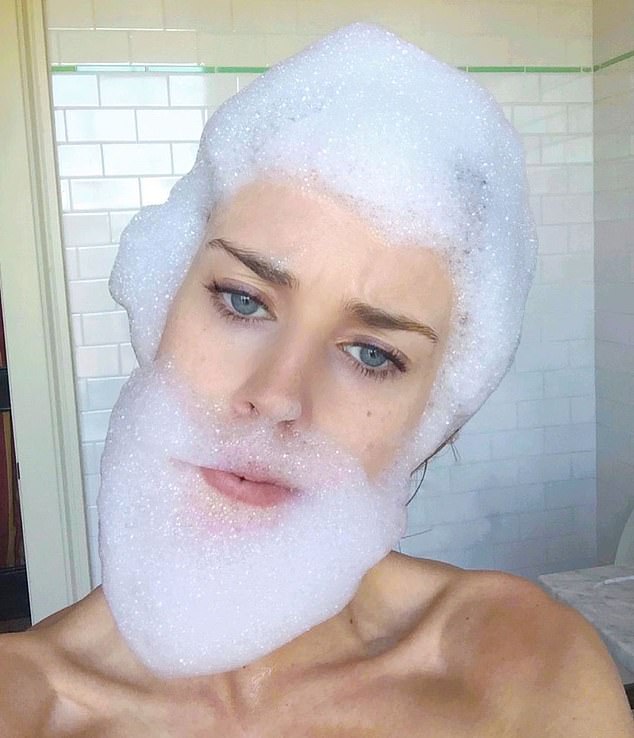 Lady Mary Charteris was ‘getting in the spirit,’ by sharing a picture of herself doing a Father Christmas impression using bubble bath foam

The 33-year-old daughter of the Earl of Wemyss and Catherine Guinness shared a picture of herself doing her Father Christmas impression using bubble bath foam.

‘Getting in the spirit,’ she explains from the bathroom of her five-star hotel in New York, which she is visiting with her musician husband of eight years, Robbie Furze.

‘They were done in such a careful and well-judged way that unless I feel a story screams to me like Normal People, I’ll try to avoid it as best as possible,’ the Irishman tells me.

Clash of the royals

Called ‘A Christmas Surprise for Key Workers’, it was shared on their social media account and is narrated in the style of a festive story for children, with Prince William saying: ‘Twas two weeks before Christmas and all through the land, key workers kept working to help give us a hand.’

Robbie will take that vinegar off your hands

Liz glams up for award – at home 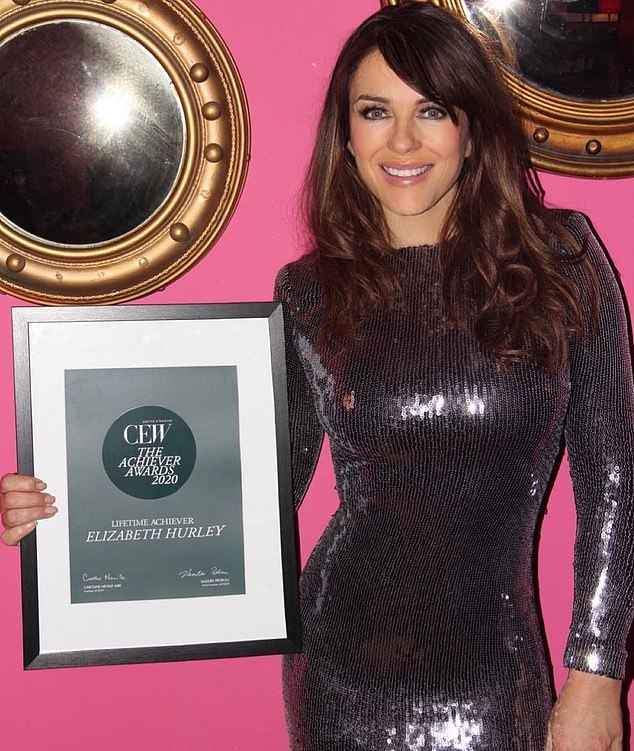 Elizabeth Hurley received a Lifetime Achievement Award at her £6million Herefordshire home this week. The award was from Cosmetic Executive Women for her work with Estee Lauder and its Breast Cancer Campaign.

Receiving a Lifetime Achievement Award this week, she hosted a celebration at her £6 million Herefordshire home.

Glammed up in a £600 Rebecca Vallance dress, Liz, 55, shared a picture of herself with the accolade from the Cosmetic Executive Women for her work with Estee Lauder and its Breast Cancer Campaign.

‘All dressed up (at home) to receive the award,’ she says.

Her former fiancé, ex-cricketer Shane Warne, was among the first to congratulate her.