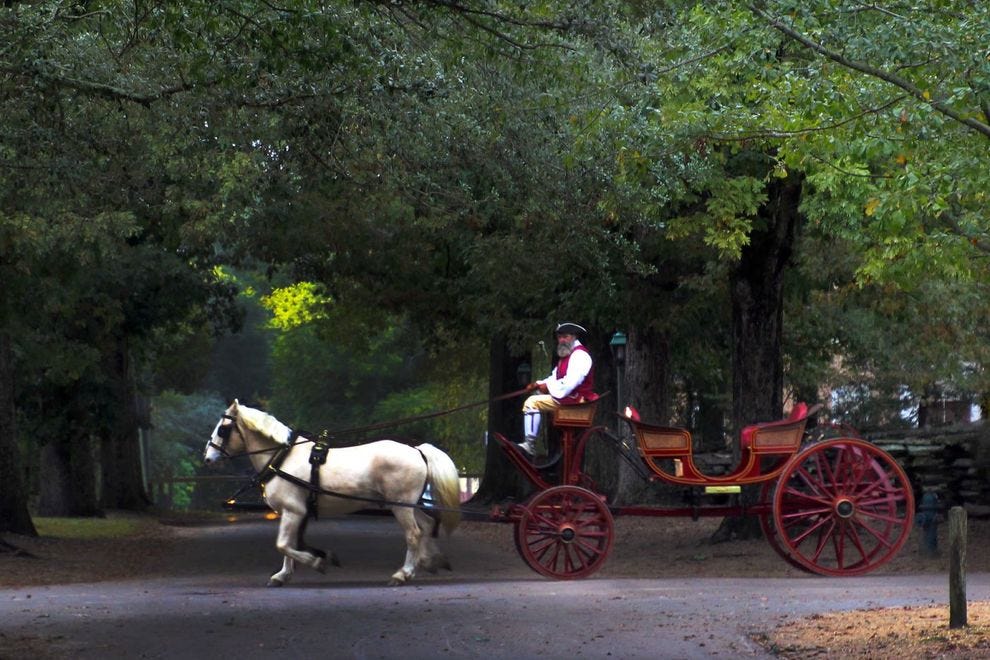 Explore the ambiance of Colonial Williamsburg

We all know “Virginia is for Lovers,” but it is also for history buffs! Colonial Williamsburg, established in 1609, takes visitors back in time with its original and reconstructed buildings, parks and pathways.

While there are many indoor venues you can explore here, you can easily spend an entire day or more outside, soaking in the historical ambiance of this amazing monument to 17th century life in the Americas. 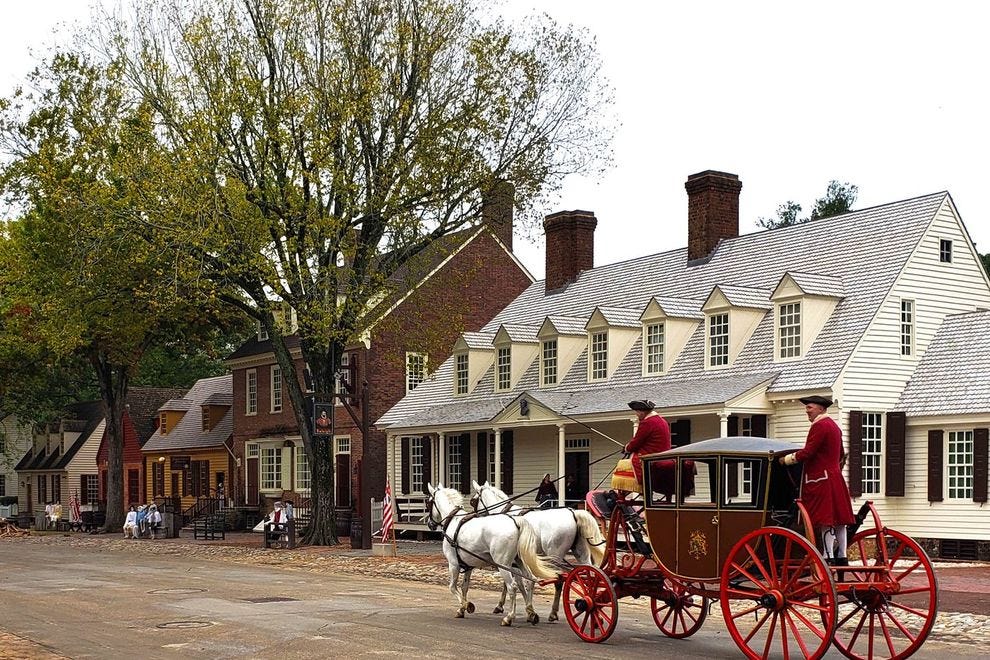 Go back in time to the colonies of the 17th-18th centuries as you stroll through the streets and paths of Colonial Williamsburg. Authentically-clad horsemen in carriages trot past original edifices of the time and will carry you and your family to another world (and not commercially – this is the real thing!).

There are more than 500 original, restored and reconstructed buildings within the boundaries of Colonial Williamsburg. 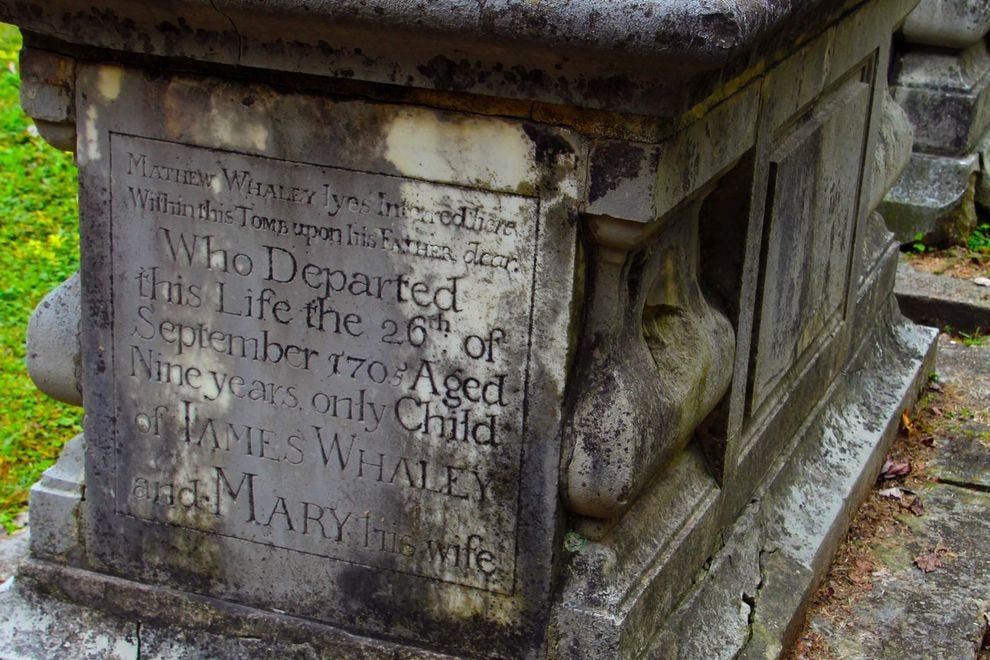 Visiting old graveyards when you travel is an excellent way to immerse yourself in the history of a time and place. This gravestone is located in the Bruton Parish Episcopal Church Cemetery in Colonial Williamsburg. It tells the sad story of the death in 1705 of 9-year old Mathew, only child of James Whaley, a prominent merchant in the community, and his wife Mary, a local teacher.

The Matthew Whaley School in Williamsburg carries his name, as well as the distinction of being one of the most haunted schools in the country. Sightings of small apparitions that resemble a boy are common in the hallways and on the grounds of the school. 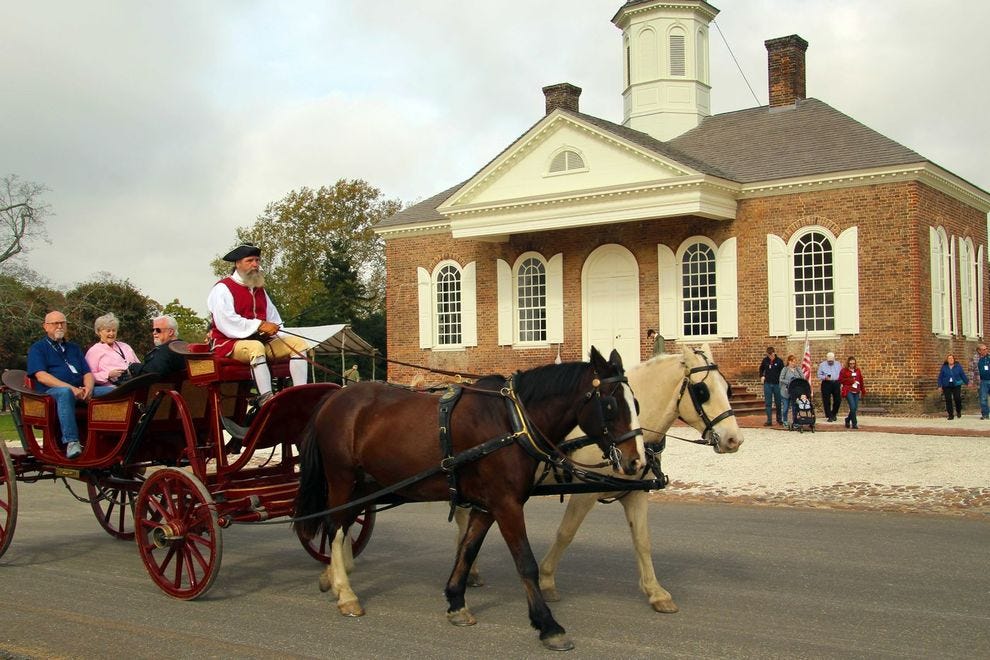 Constructed from 1770 to 1771 in the Georgian architectural style, this historic brick building looms over Colonial Williamsburg’s Market Square. Colonial-era trials are staged daily for visitors, if you opt to take a tour to learn more about the intricate legal process prevalent at this time in America’s history. 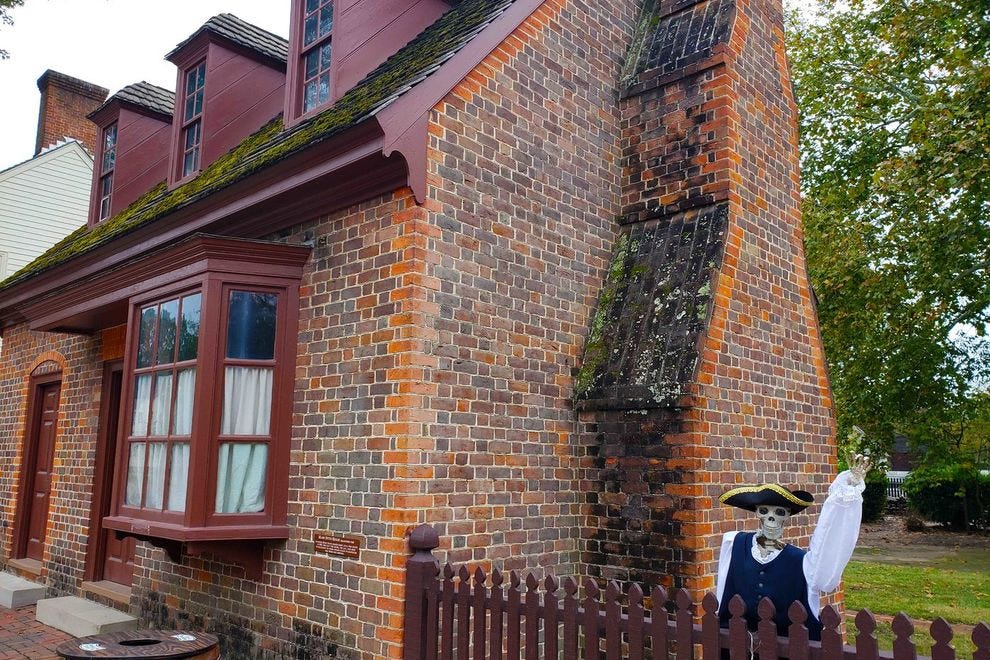 During an October visit, you can enjoy Halloween decor while srolling through the streets of Colonial Williamsburg. Whether you believe in ghosts or not, there is sufficient paranormal activity here to support several ghost tour companies.

It stands to reason that there may be many old souls hanging around town, since Virginia is among the nation’s oldest colonies. Jamestown, founded in 1607 and the first successful English settlement in America, is just six miles away. 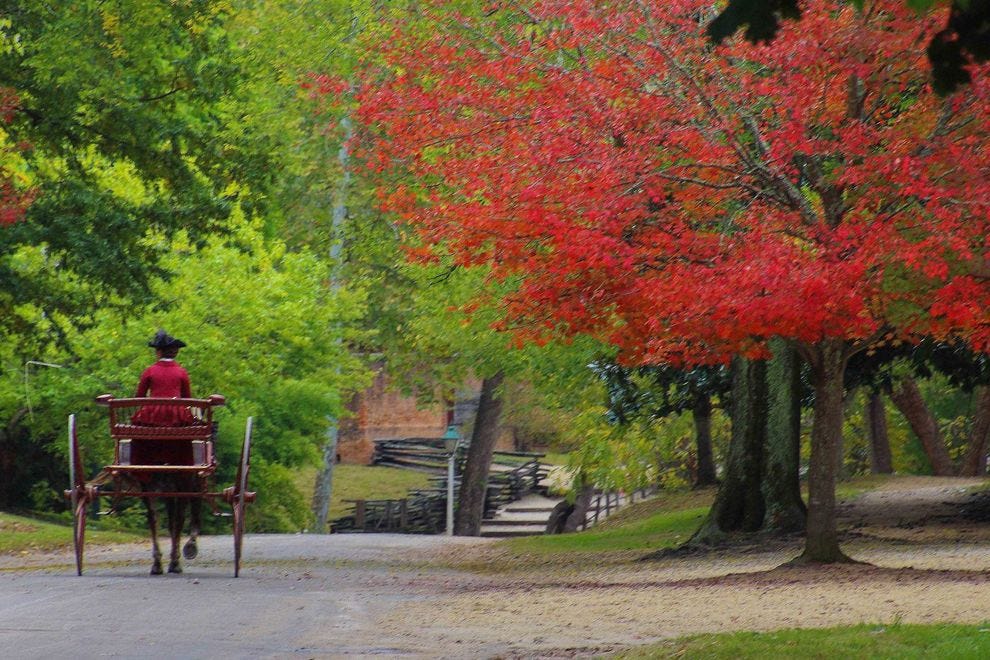 An amble through Colonial Williamsburg in the fall months, when the autumn leaf colors are at their peak, is reason enough to spend the day walking along the many paths that crisscross this historical site. 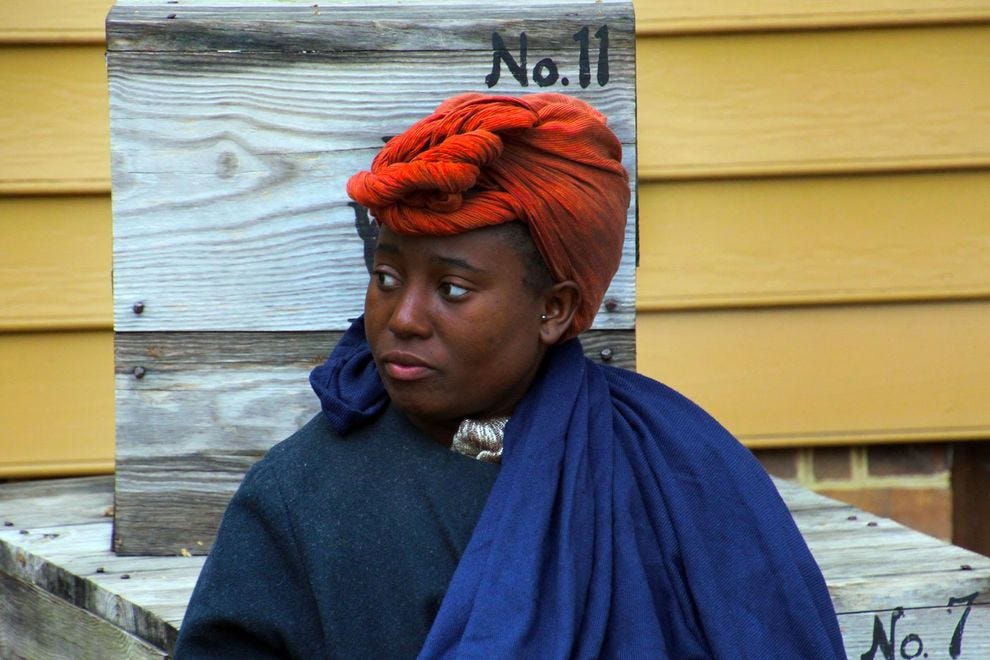 Half of Colonial Williamsburg’s population was Black during the 18th century, and that’s reflected in the cast of actors who demonstrate what life was like for African Virginians.

In fact, the site of one of America’s oldest churches founded by Blacks may soon be unearthed. In September 2020, Colonial Williamsburg archaeologists began excavating the First Baptist Church to find the earliest structure within the city limits where the congregation met.

The church was organized in 1776 by enslaved and free Blacks in defiance of the laws of the day forbidding the congregation of Black people. 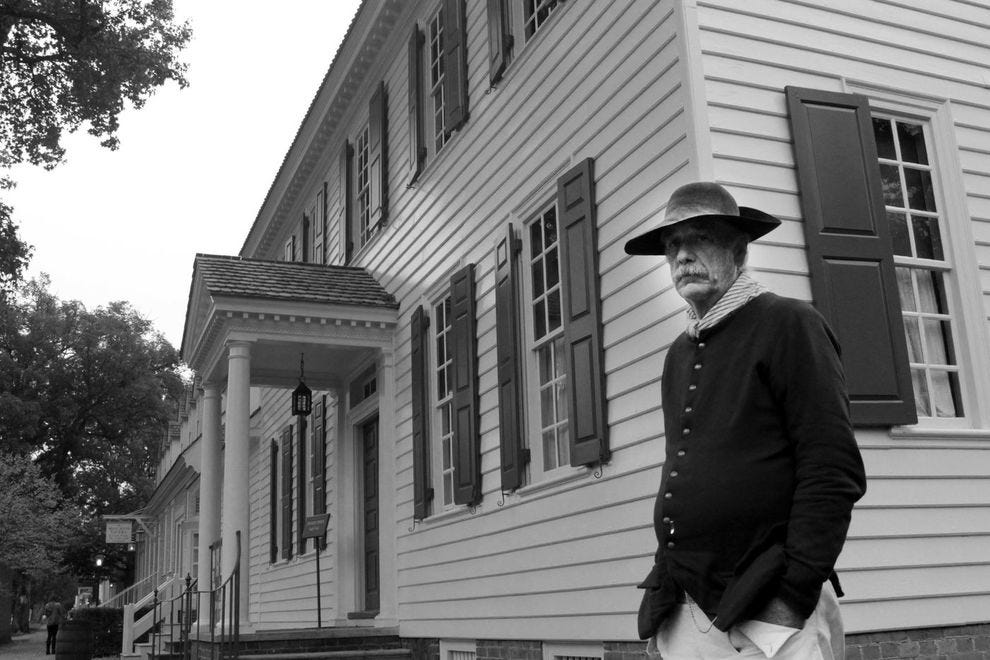 It goes without saying that a visit to Colonial Williamsburg is a photographer’s delight. Have your camera or cell phone ready to capture the many photo opportunities that will appear before you as you roam the picturesque walkways. 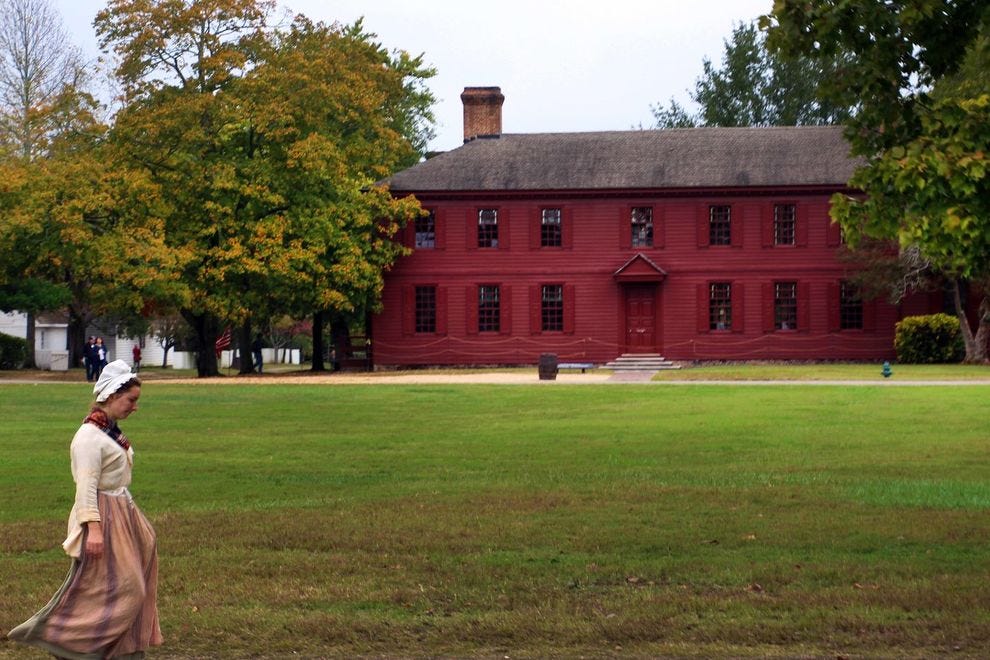 The Peyton Randolph House is one of the reasons Colonial Williamsburg is known as a ghost hunter’s paradise. Constructed in the early 18th century, this estate has welcomed historical dignitaries such as Thomas Jefferson, cousin of its owner Peyton Randolph.

Tours are available to the public to view its lavish structure, but it is also featured on every ghost tour in Williamsburg and boasts the title of being the most haunted house in the Williamsburg area. 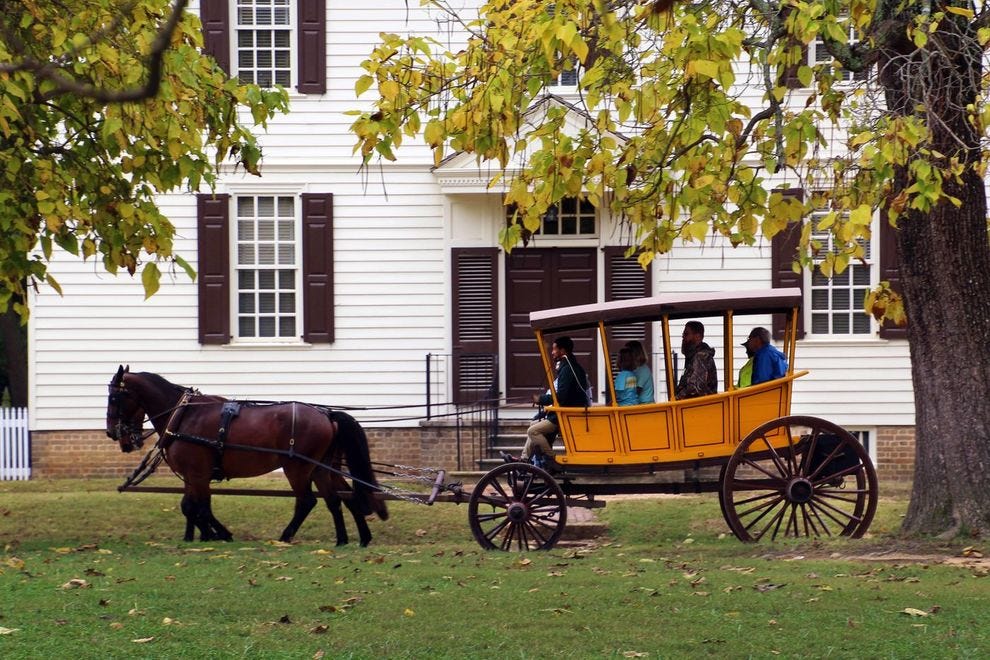 There is nothing more romantic than riding in a horse-drawn carriage through the streets of Colonial Williamsburg. From your perch, you will relive what the colonists must have experienced in the day when the horse and wagon were the only means of transportation. 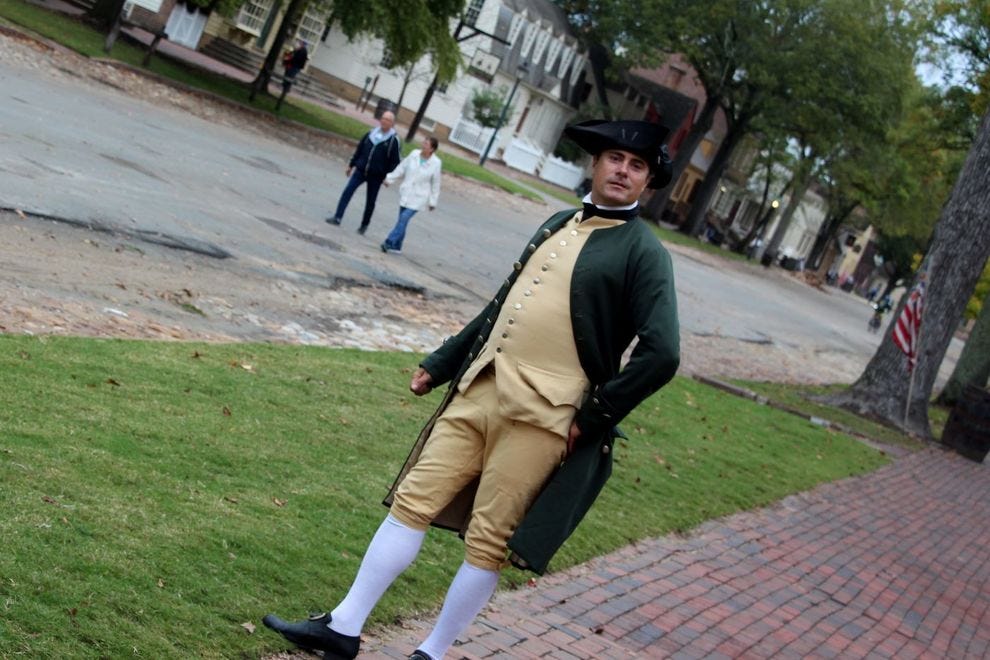 A visit to Colonial Williamsburg in October has several advantages. Crowds are sparse, so you’ll have plenty of room to admire the many authentically costumed greeters who will graciously welcome you to their historic community. 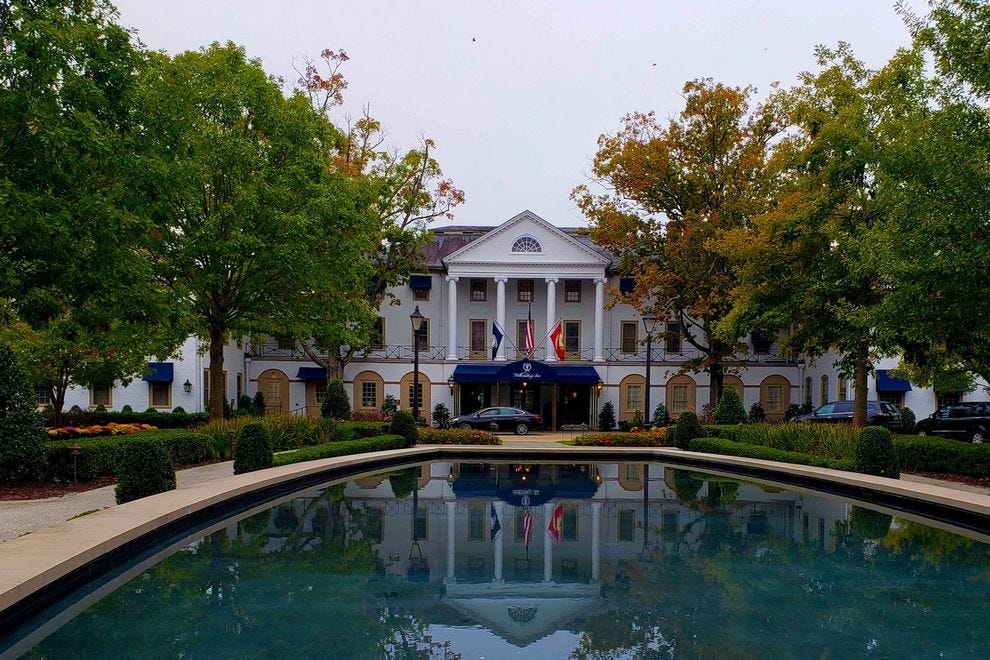 It carries the distinction of having twice hosted Queen Elizabeth II and her husband Prince Phillip during their visit to the Jamestown settlement. 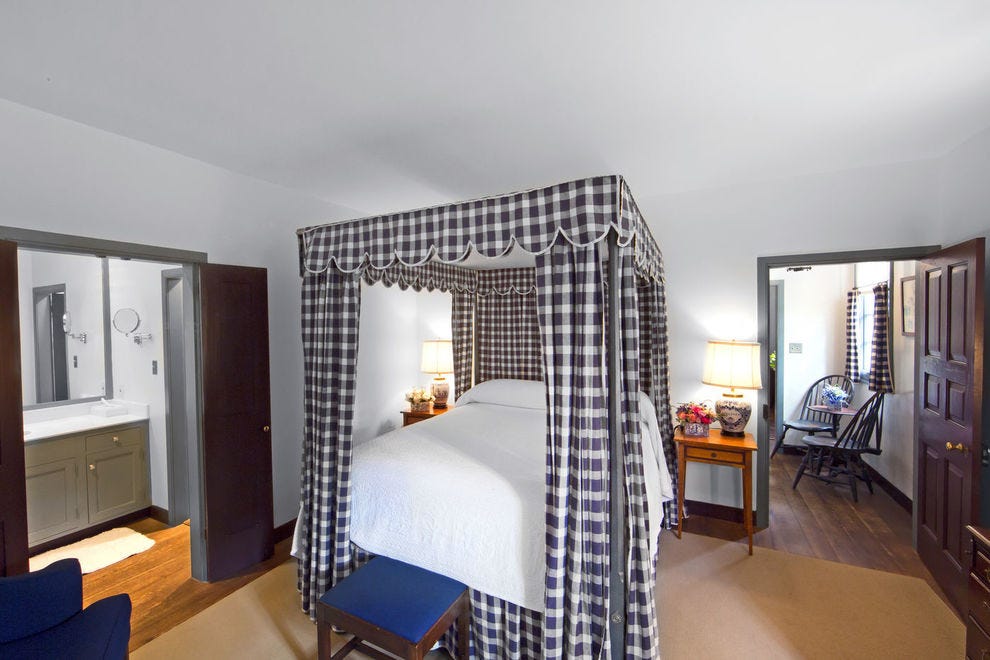 Tuck yourself away in a Colonial house

Most visitors to Colonial Williamsburg may not be aware of the private Colonial Houses that are peppered just streets away from the historic district. With over 25 options available, these quaint hidden gems are perfect for those who are seeking an authentic lodging experience that transports them back in time, while enjoying the modern perks and amenities of a traditional hotel. 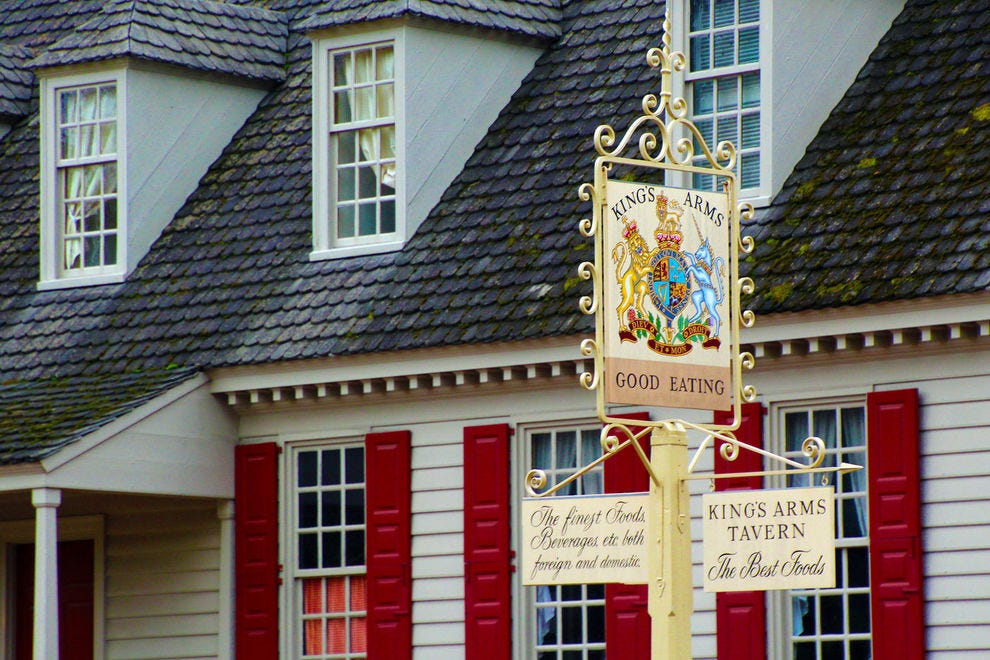 There are several unique dining venues scattered through Colonial Williamsburg. One is the King’s Arms Tavern, which describes itself as an 18th-century chop house and provides a “genteel atmosphere” at lunch and dinner. The staff wear period dress and the menu features Virginia specialties such as peanut soup, Virginia ham and colonial game pie. 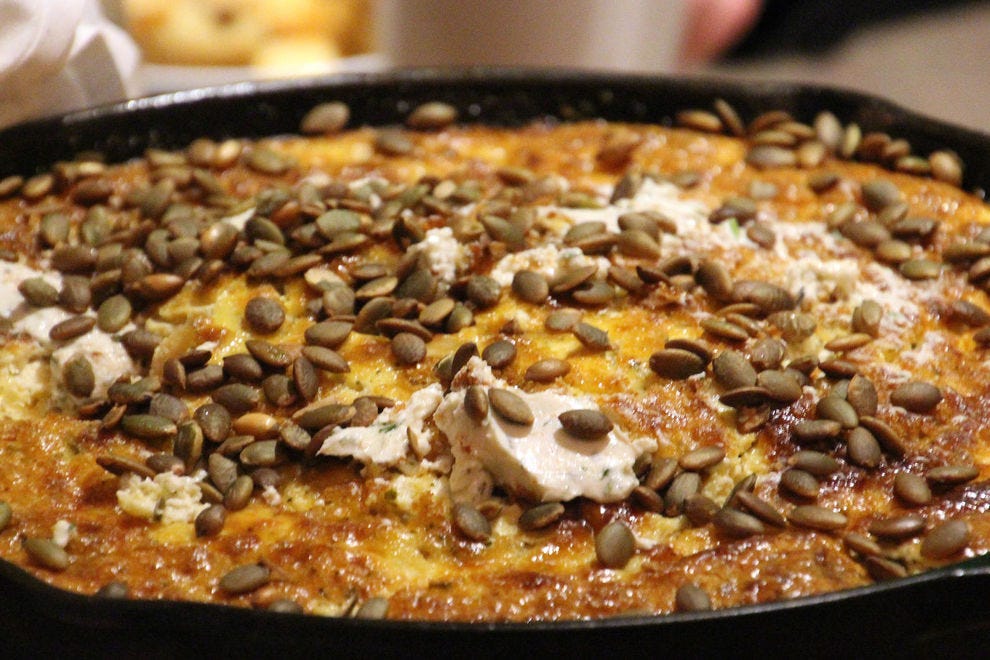 Speaking of Virginia’s colonial cuisine, do make the effort to try some of the interesting culinary options you’ll find on menus in Colonial Williamsburg. At the Traditions restaurant in the historic Williamsburg Inn, you can sample a wide variety of dishes whose recipes go back centuries. 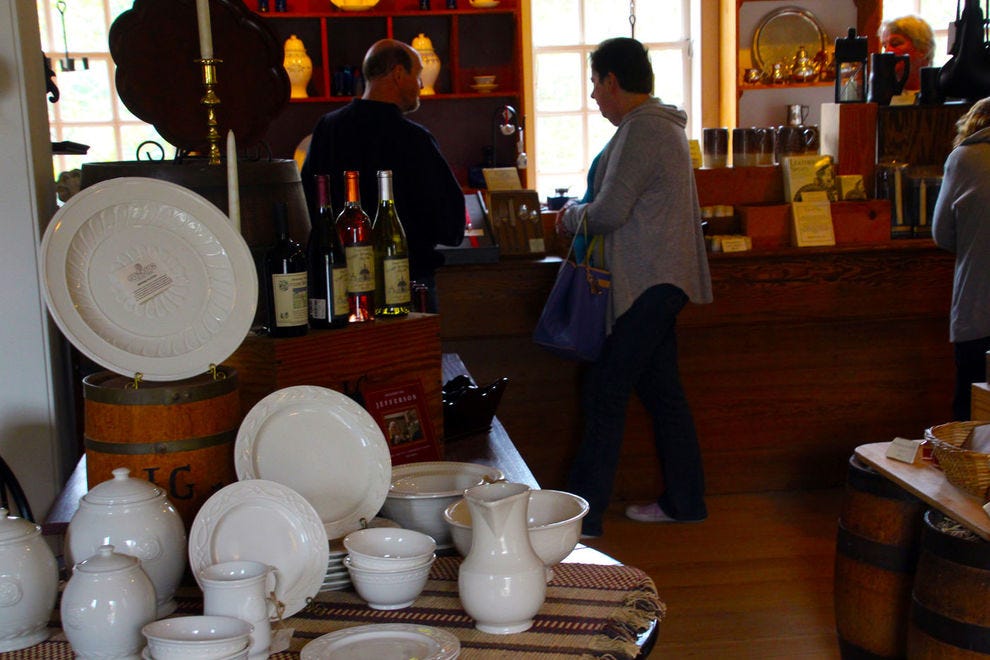 Did we mention shopping in Colonial Williamsburg is an adventure in itself? Visit the 18th-century shops in the Historic Area for everything from replicas of original colonial dinnerware to unique 18th-century jewelry hand-crafted by historic artisans.