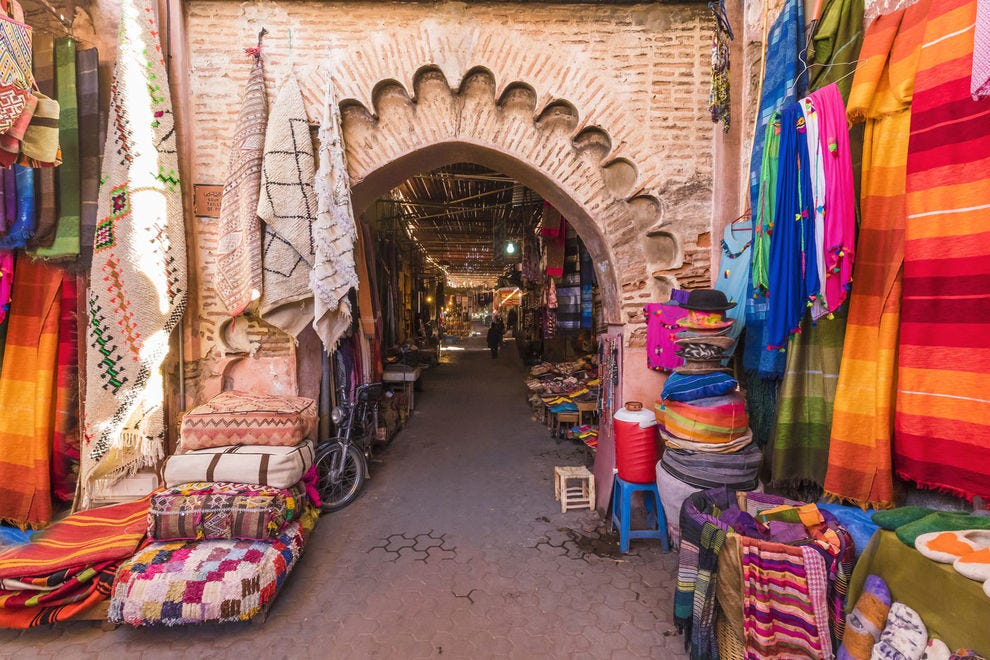 Marrakesh, one of Morocco’s most intoxicating destinations, was once an important trading post for caravans traveling through the Sahara Desert. Today, it attracts travelers from around the globe to its maze-like medina, intricate architecture and stellar shopping scene. 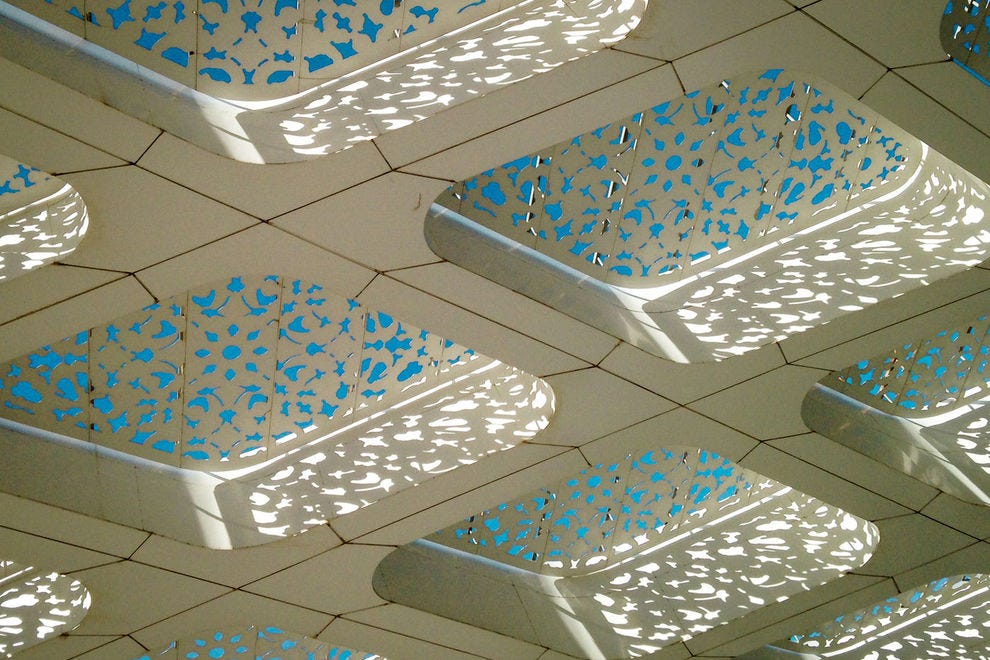 The craftsmanship on display throughout Marrakesh is evident before you even leave the airport. Marrakesh Menara Airport, completed in 2008, often ranks among the most beautiful airport terminals thanks to its arabesques that filter the sunlight. 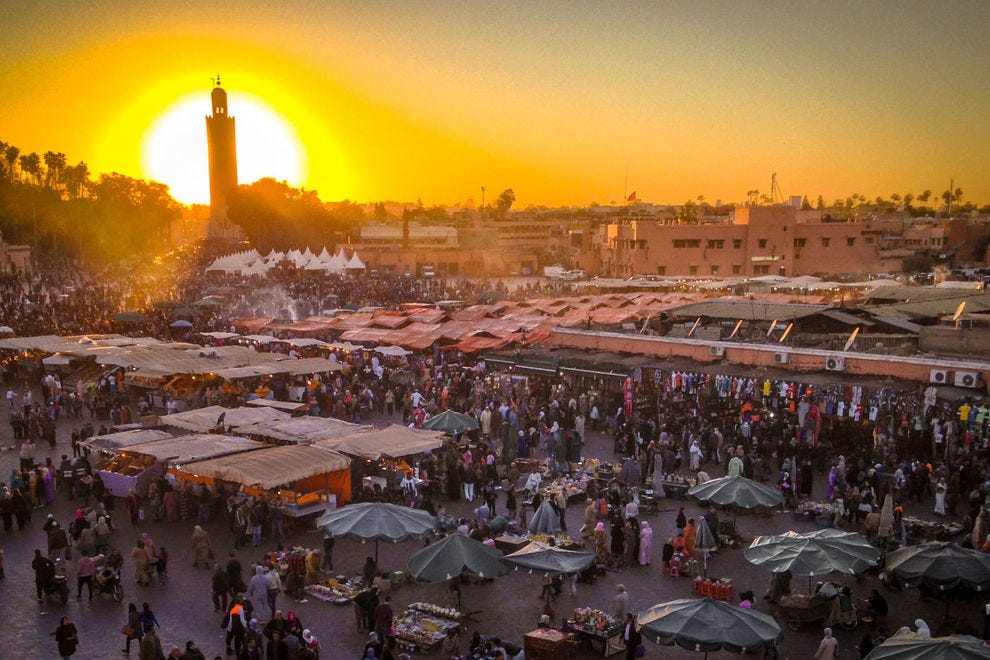 Jemaa el-Fnaa, heart of the medina

Jemaa el-Fnaa, the city’s main square, sits at the heart of the old medina. The open area has boasted some sort of market for centuries. These days, it’s a bustling collection of food vendors, snake charmers, henna tattoo artists and musicians. 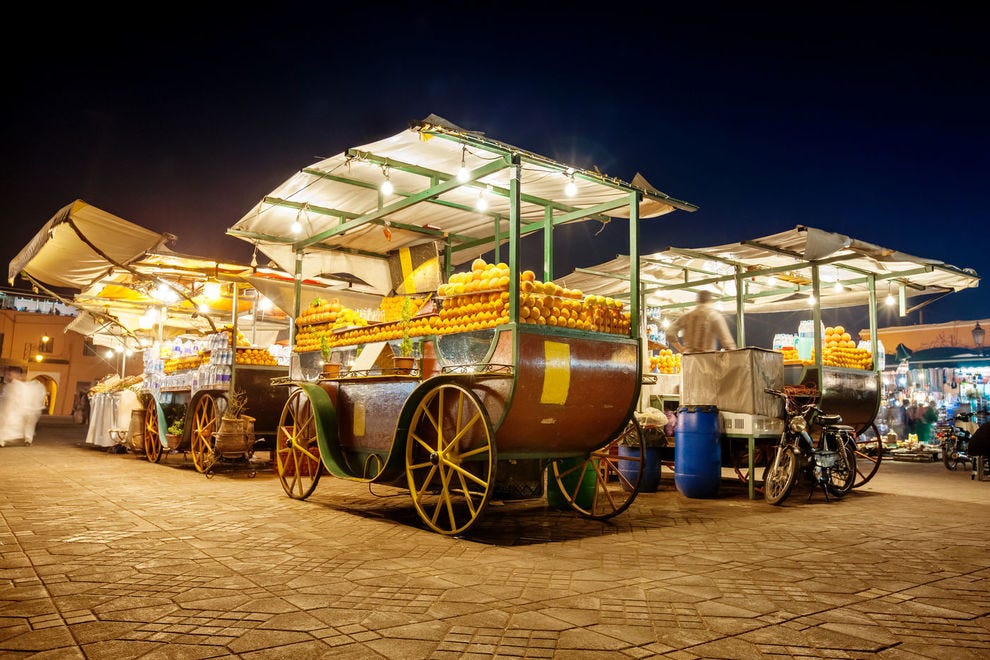 Get your vitamin C

If the North African sun has you feeling thirsty, head to Jemaa el-Fnaa for a glass of fresh-squeezed orange juice. Dozens of stalls piled high with fresh fruit squeeze juice to order. The fruit, typically grown in orchards surrounding the city, is brought in each morning, so it’s almost always fresh. 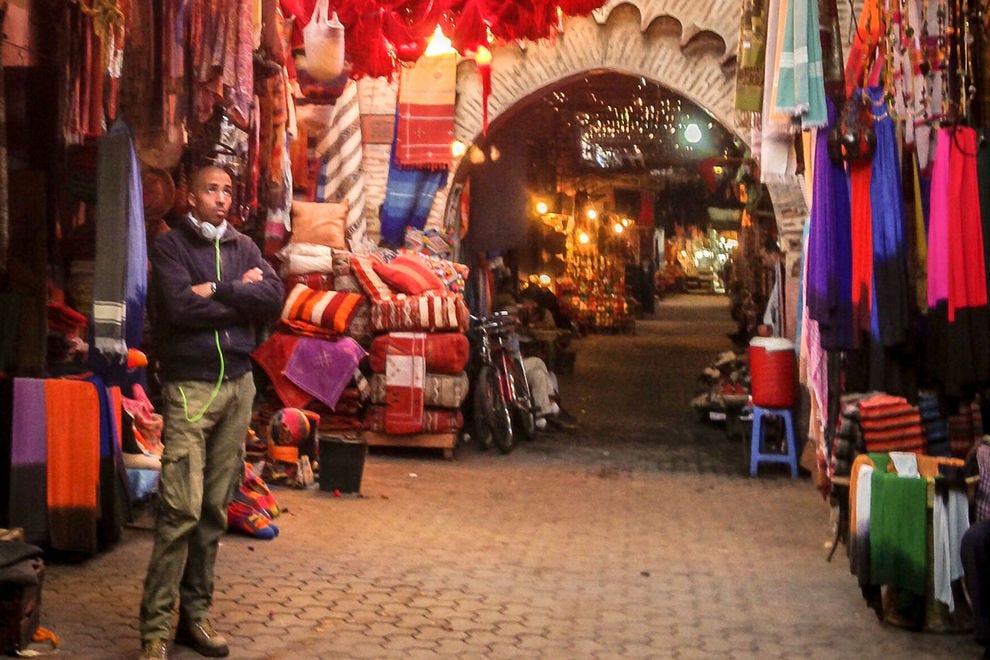 The souks of Marrakesh have served as an important trading center for thousands of years. More than 3,000 stalls sell all sorts of artisan goods and tourist knickknacks. Stroll through Souk Labbadine, the dyer’s souk, and you’ll see newly dyed textiles drying on bamboo poles alongside wool and yarn for knitting. 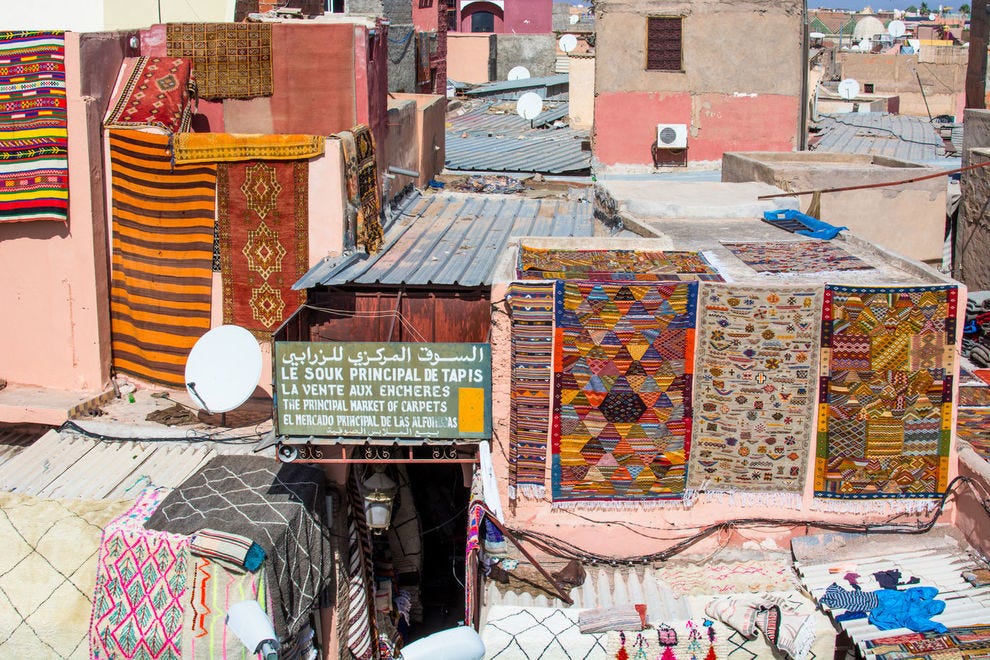 The art of weaving

Among the most prized goods for sale within the medina are the hand-woven Berber rugs. These tightly woven wool rugs have been an integral part of the Berber culture for centuries. Each one can take several months to complete and typically come with a price tag of thousands of dollars. 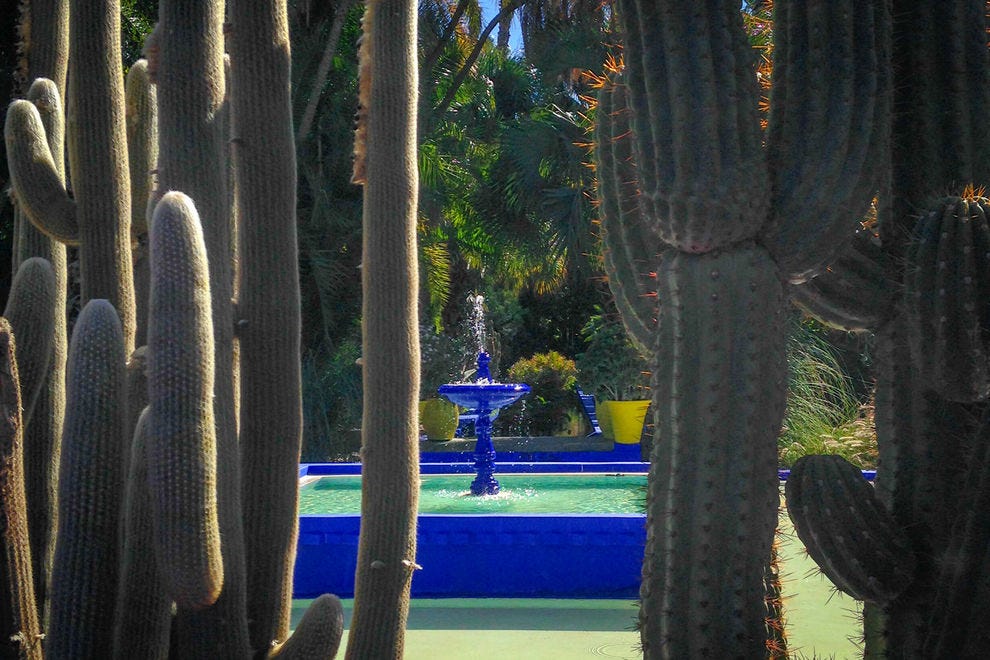 French artist Jacques Majorelle spent four decades building the Jardin Majorelle. The intense shade of blue seen throughout the garden was a favorite of the artist, one he later trademarked Majorelle Blue. The garden was later purchased and restored by French fashion designer Yves Saint-Laurent, who expanded the garden to include more than 300 species of plants. 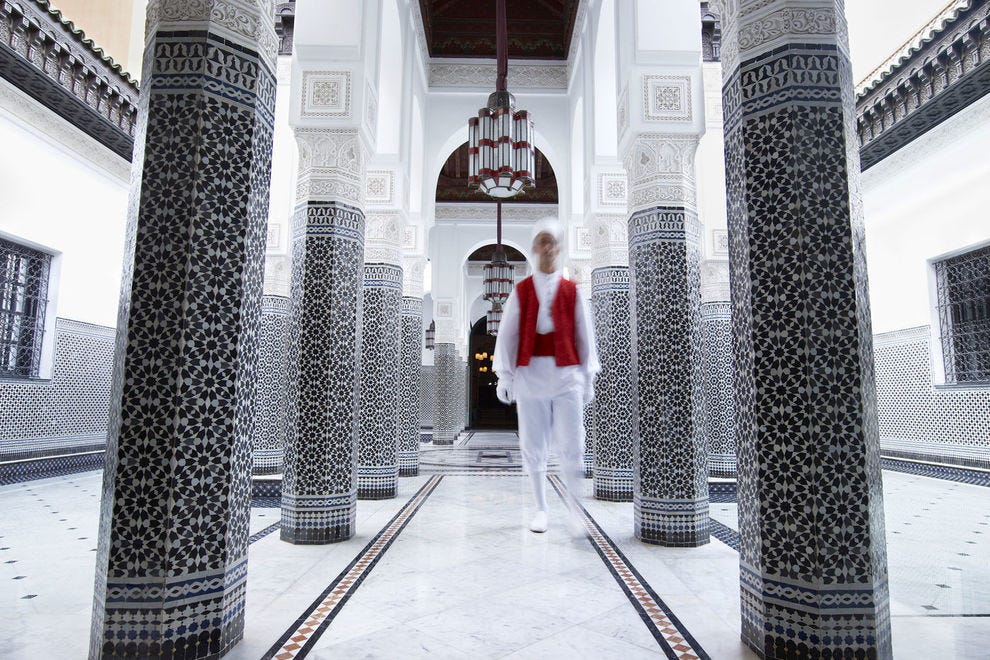 Photo courtesy of The Leading Hotels of the World

Accommodations in Marrakesh often take the form of riads, traditional Moroccan houses built around a central courtyard. Each feels like its own peaceful escape from the surrounding medina, and many are outfitted with spectacular tilework, Berber rugs, hand-worked lanterns and sparkling pools. 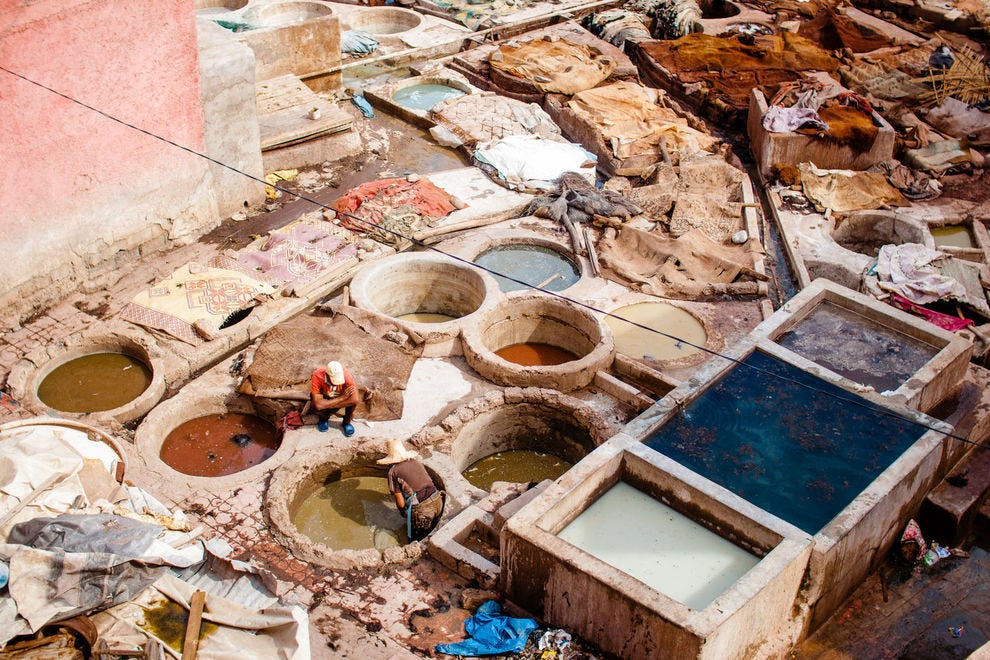 Leather tanning has been an industry in Marrakesh since the 11th century. Visitors can shop for leather goods in the souks or see how they’re made with a visit to one of the city’s tanneries. From the terraces of local shops, you can look down at the vats of quicklime and water used to treat the leather.

The scent can be unpleasant and overpowering, but many shopkeepers offer a sprig of mint to relieve your nose as you watch the work. 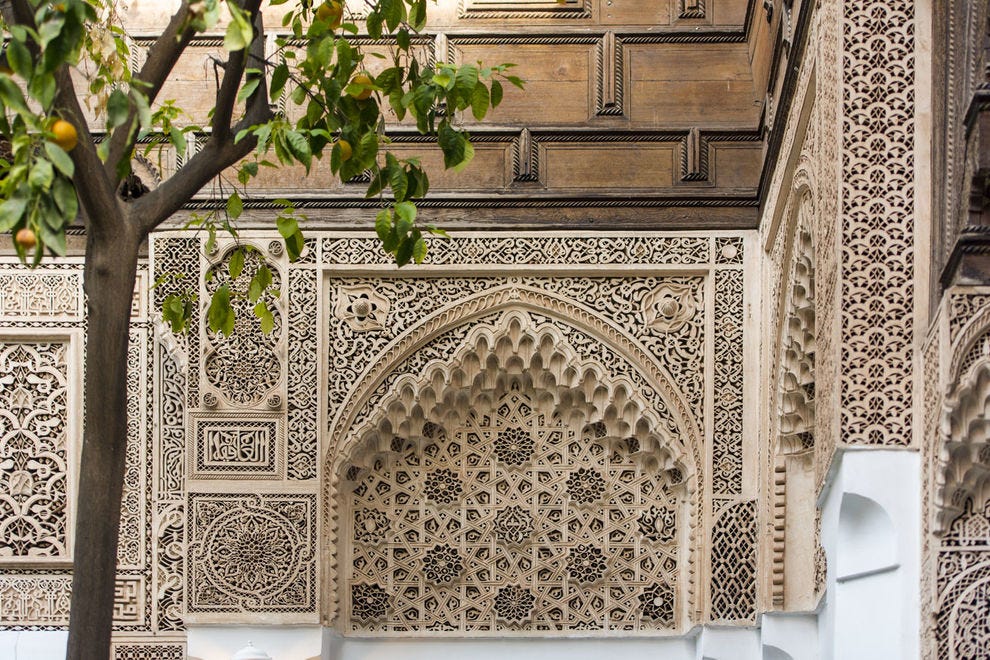 The Bahia Palace was built by Grand Vizier Si Moussa in the 1860s and later expanded by his successor Bou Ahmed to accommodate his wives and concubines. These days, the palace ranks among the city’s most popular attractions, drawing in visitors with its stunning painted wood ceilings, marquetry and symmetrical gardens. 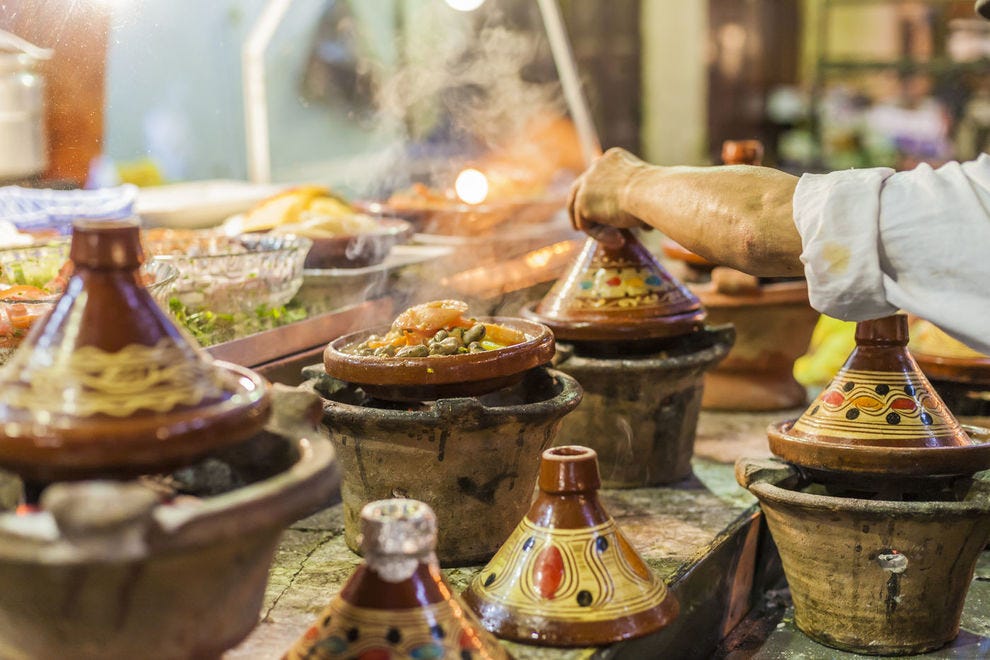 If you only eat one thing in Morocco, make it a traditional tajine. The word “tajine” actually refers to the cooking vessel – a clay pot with a conical lid used for stewing meats and vegetables. Popular variations include chicken with preserved lemon and olives or lamb with prunes. 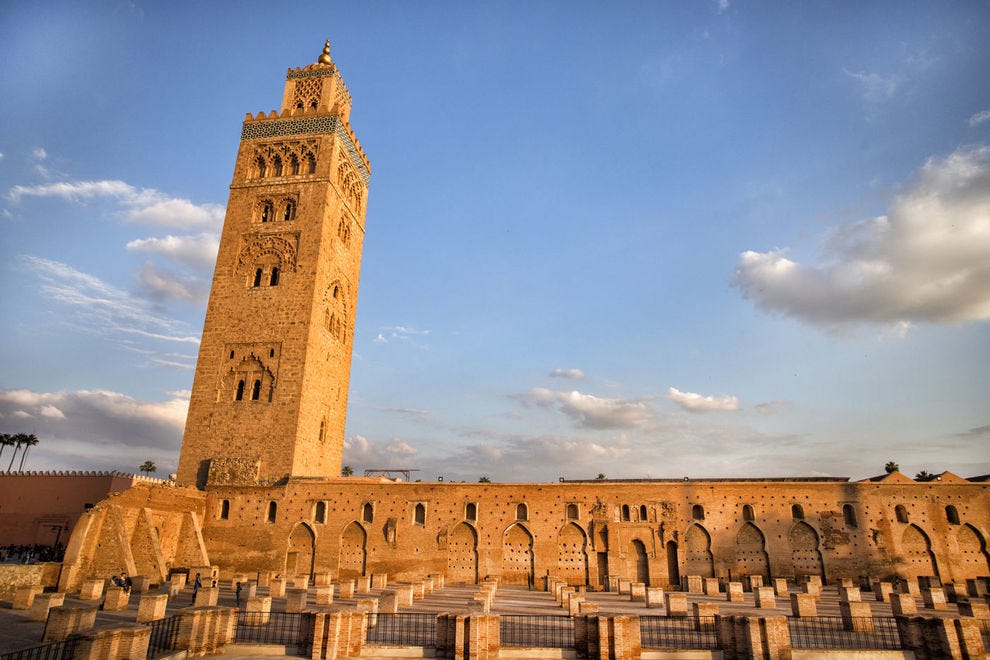 The monumental minaret of the Koutoubia Mosque broadcasts a call to prayer over the medina five times a day. During the 19th century, the base of the tower was a popular gathering spot for booksellers (“kutubiyyin” in Moroccan). 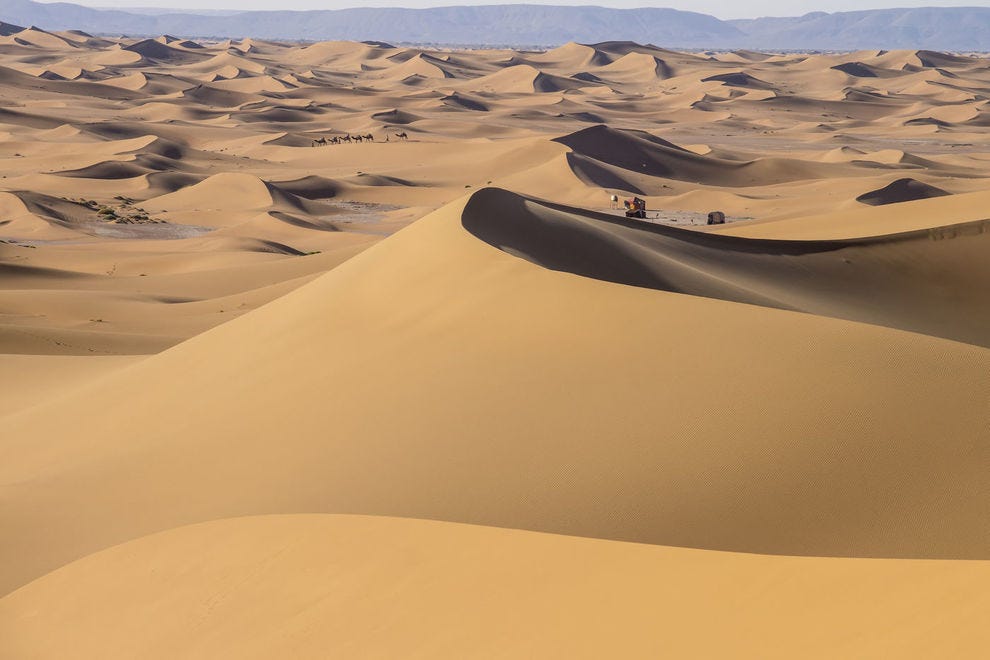 The dunes of the Sahara

Travelers who can pull themselves away from the sights, sounds and smells of the Marrakesh medina will be rewarded by taking an overnight excursion into the Sahara Desert. Some of the rolling sand dunes tower nearly 1,000 feet. Spend the night at a Berber camp nestled amid the dunes for the full experience. 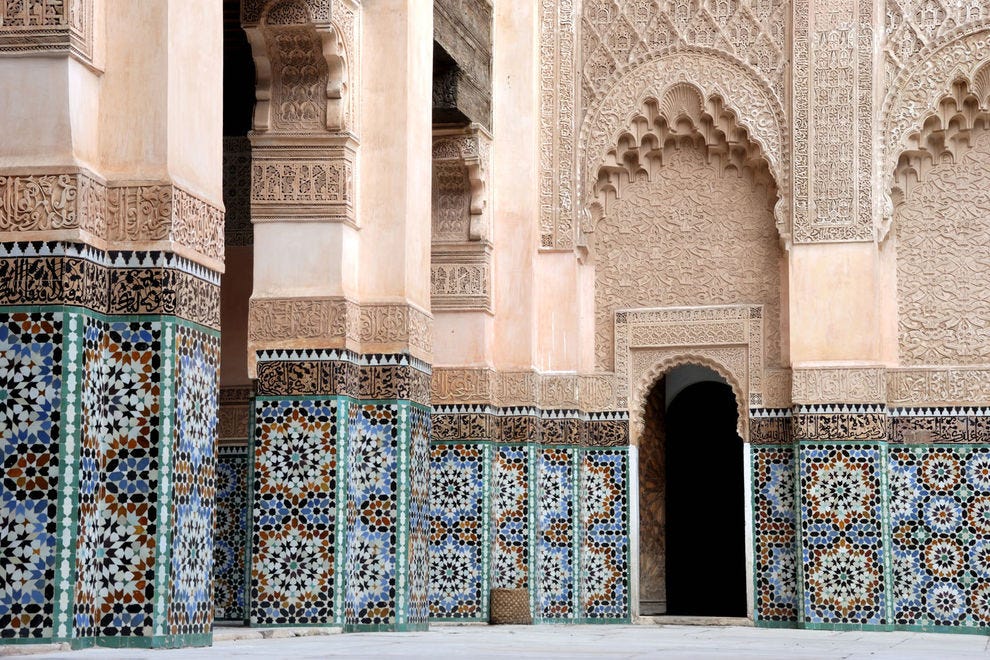 This Quranic learning center was once the largest in North Africa, serving more than 900 students within its walls. While no longer used as a college, the madrasa continues to impress with its Moorish zellige tiles, carved cedar wood domes and windows, and beautiful Islamic calligraphy. 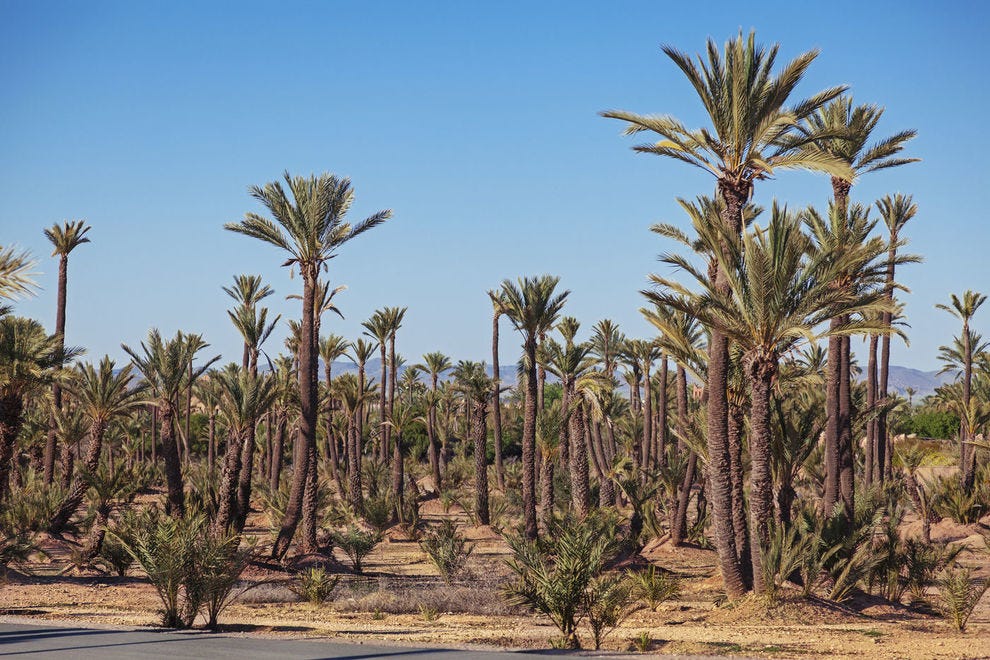 The Palmeraie (Palm Grove) has become one of the city’s most affluent neighborhoods, sometimes nicknamed the Beverly Hills of Marrakesh. Visitors come here to sip mint tea in the courtyard of a five-star hotel, go for a camel ride amid the palm trees or embark on a quad bike adventure into the surrounding desert. 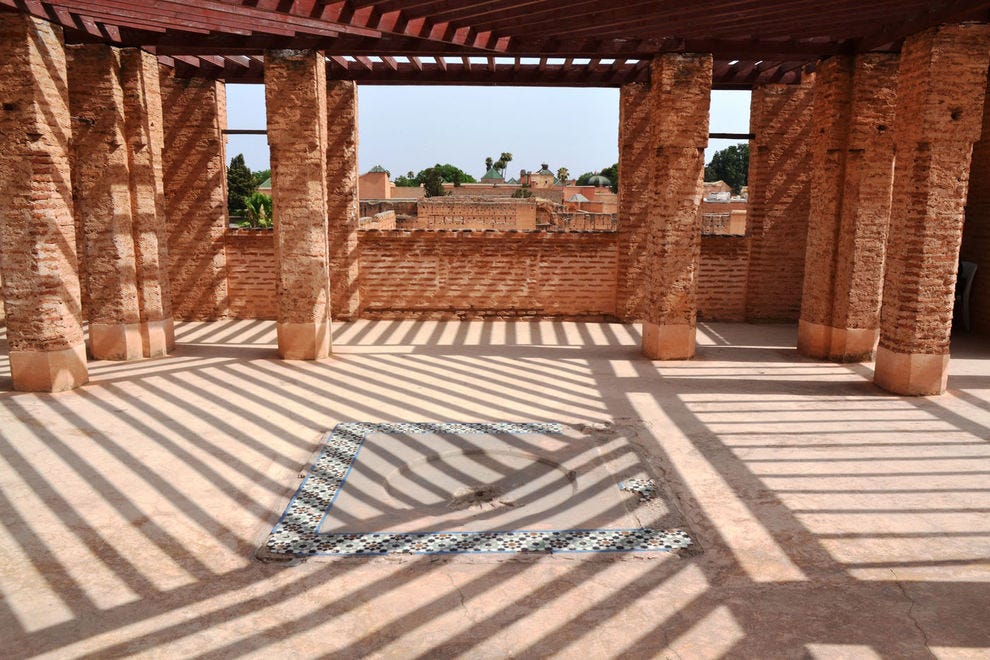 This palace to the south of the medina was built toward the end of the 16th century by Sultan Ahmed Al-Mansour. The ruined sandstone shell of the once opulent palace offers excellent views from the terraces and ramparts. 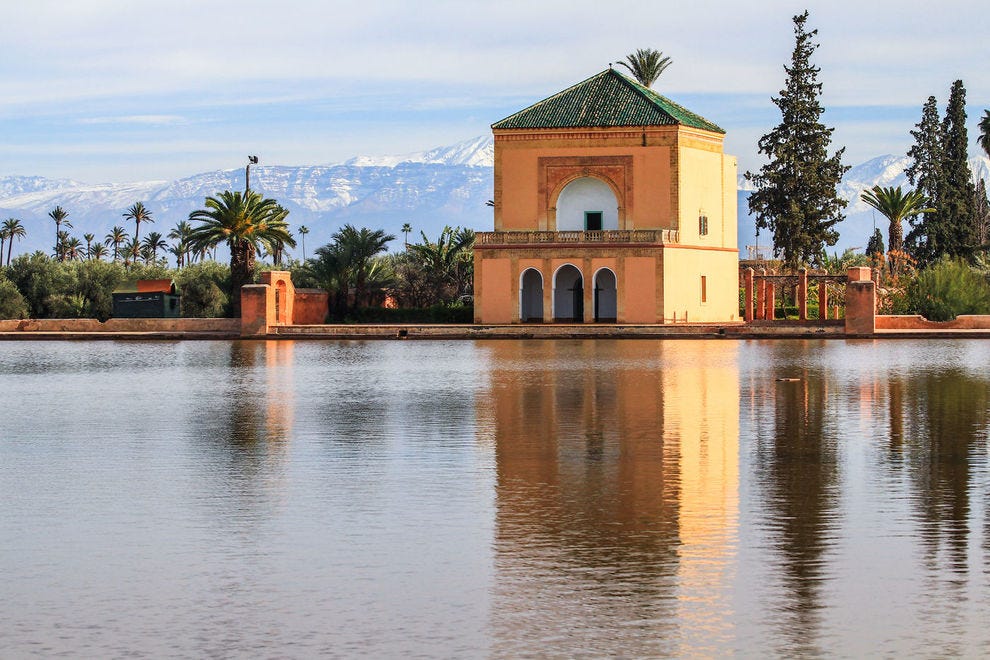 The Menara Gardens make a good case for being the city’s best green space. Locals and visitors alike come to picnic among the olive groves or take in the sights of the High Atlas Mountains reflected off the surface of the manmade lagoon. 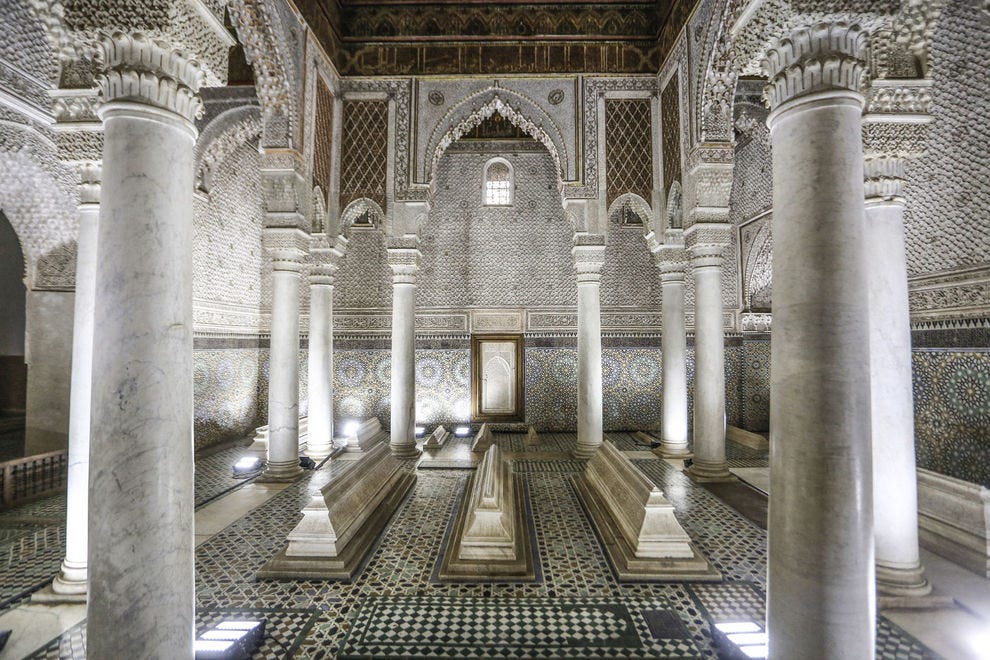 Sultans of the Saadi Dynasty ruled Morocco from 1549 to 1659. When the dynasty fell, their royal tombs were sealed and hidden, only to be uncovered in 1917. Modern day visitors can see that no expense was spared in these royal mausoleums. Marble was imported from Italy and pure gold used to gild the decorative plasterwork. 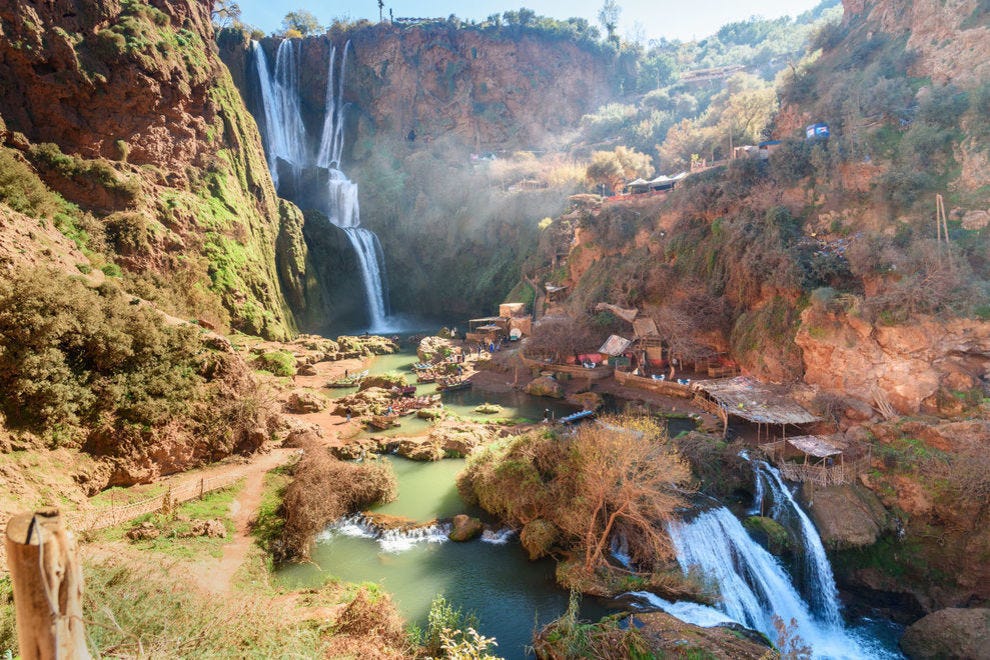 Take a day trip to the Atlas Mountains to see one of Morocco’s most impressive sights, the Ouzoud Falls. The second-tallest waterfalls in the country are particularly impressive in late spring when fed by snowmelt. Keep an eye out for Barbary apes who can often be seen playing in the surrounding trees (or trying to snag a pair of sunglasses off an unsuspecting tourist).

Bethune-Cookman shuts down all sports through spring, citing 'spike' in COVID-19 cases

Jerry Jones gets chippy in defending Dallas Cowboys: 'Just shut up and let me answer it'

Jerry Jones gets chippy in defending Dallas Cowboys: 'Just shut up and let me answer it'