See the South Island of New Zealand on this virtual tour

Welcome to the South Island

The largest of New Zealand’s two main islands invites adventurers to explore some of the world’s most pristine natural landscapes. From snow-capped mountains to the majestic coast, come along as we (virtually) visit some of the best destinations on the South Island. 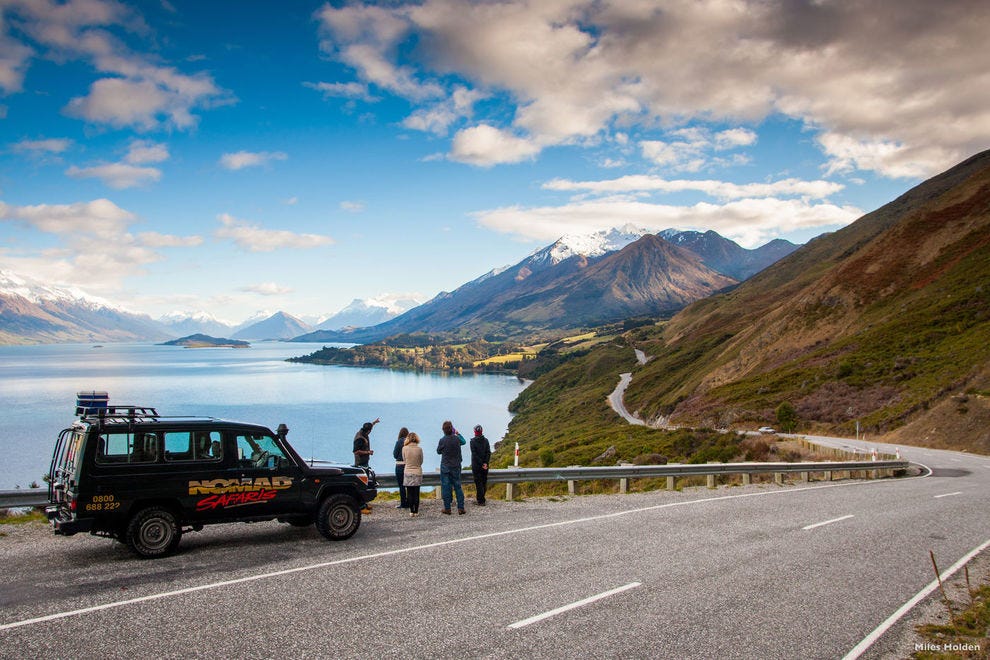 The Road to Glenorchy

One of New Zealand’s most scenic drives (and that’s really saying something) winds between Queenstown and Glenorchy. The road to Glenorchy curves through forests, past mountain lakes and parallel to cliff edges along its 28.5-mile length. 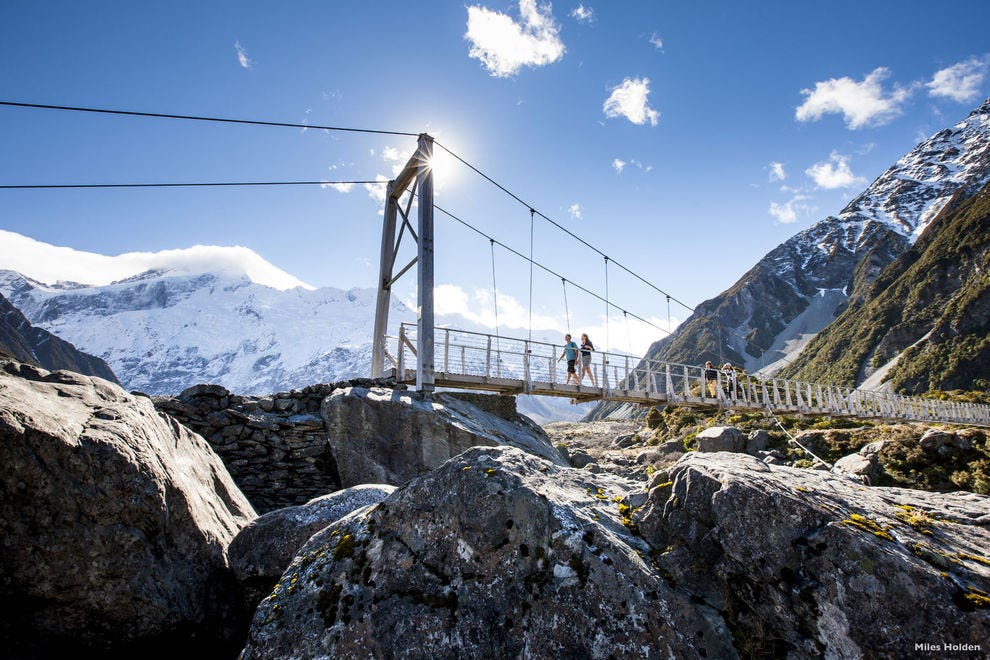 The South Island is a hiker’s paradise. Among the most popular walks is the Hooker Valley Track in Aoraki/Mt Cook National Park. The trail follows the Hooker River up the valley, ending at a glacial lake. Hikers cross three swing bridges along the way. 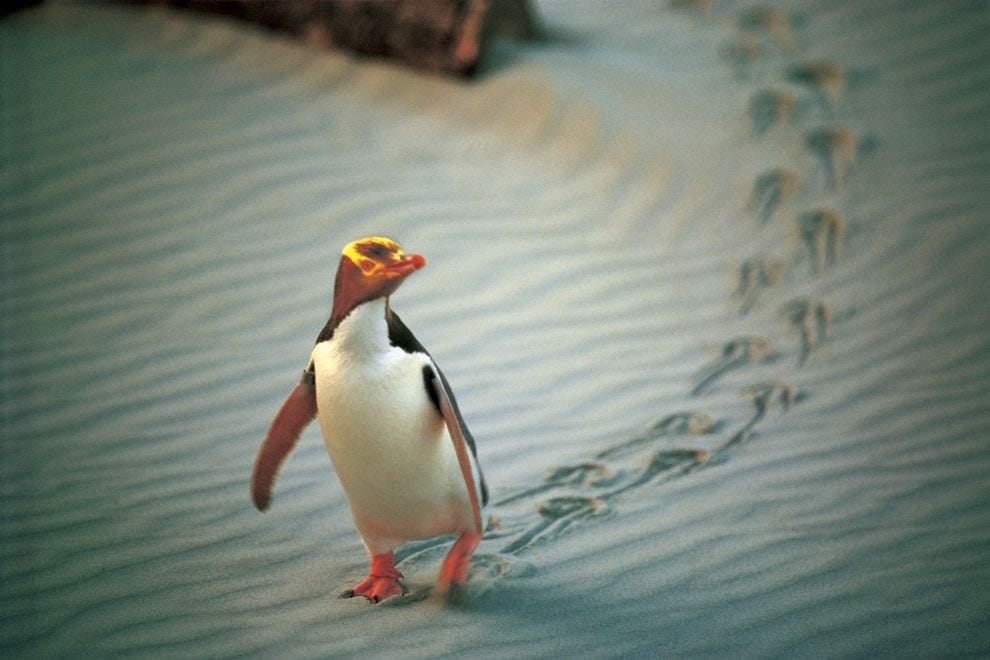 New Zealand is home to three species of penguins, including the korora (little blue penguin), the world’s smallest. The Otago Peninsula on the South Island is home to several breeding colonies of these birds who reside here throughout the year. 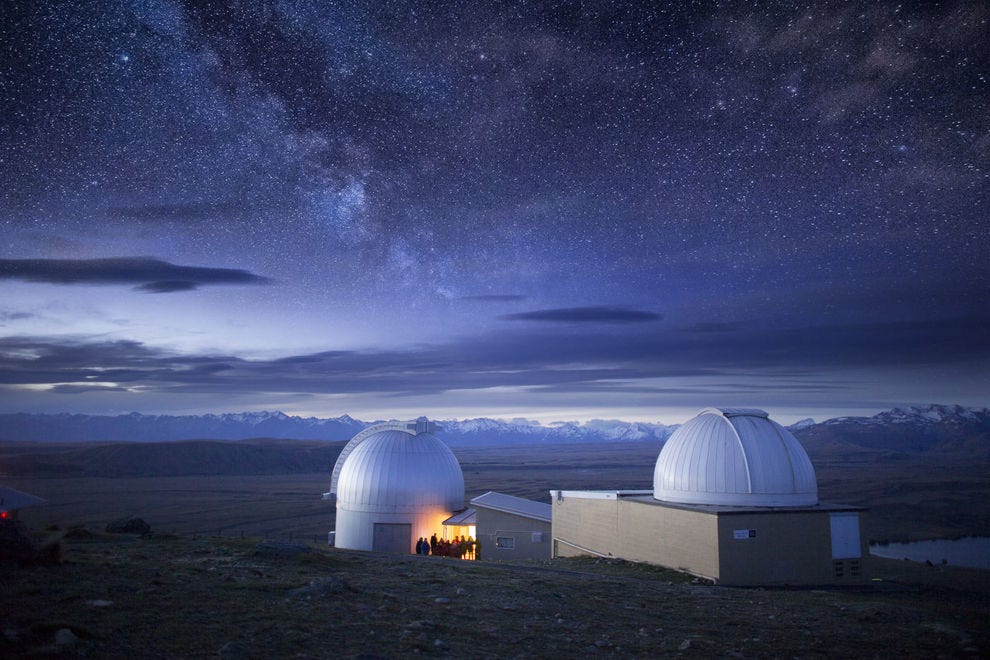 One of the best times to visit Mount John is at night. This peak is home to the University of Canterbury Mt. John Observatory with six telescopes which can collectively observe 50 million stars each night. The Dark Sky Project offers guided stargazing experiences throughout the year. 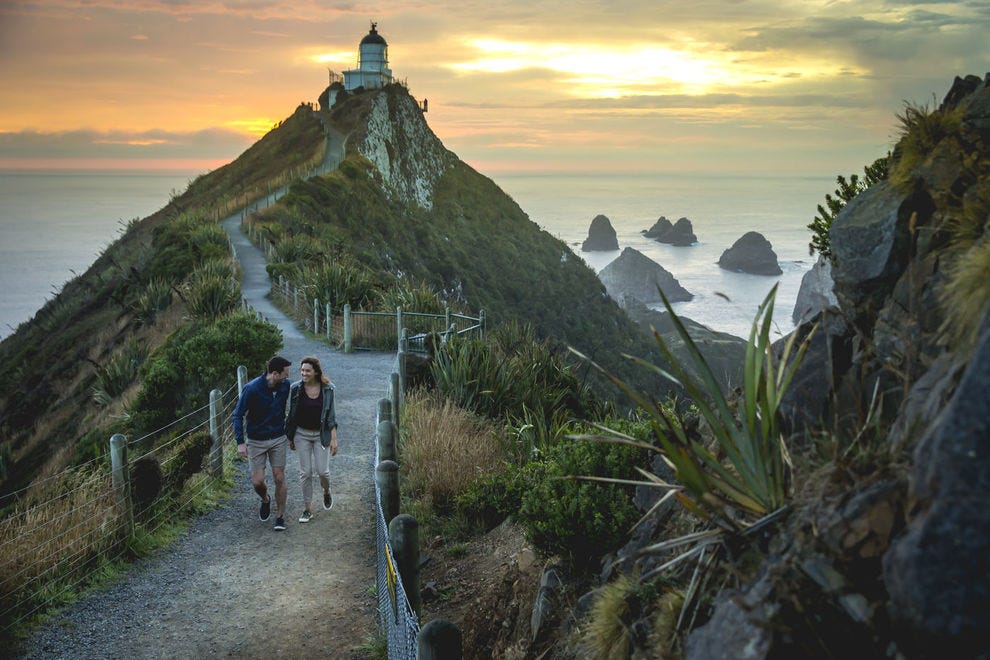 You’ll find the spectacular Nugget Point with the country’s oldest lighthouse on the Catlins Coast of the South Island. Captain Cook named the area after the rocks that looked to him like pieces of gold. From the Tokata lighthouse, you can often spot fur seals in the surf below. 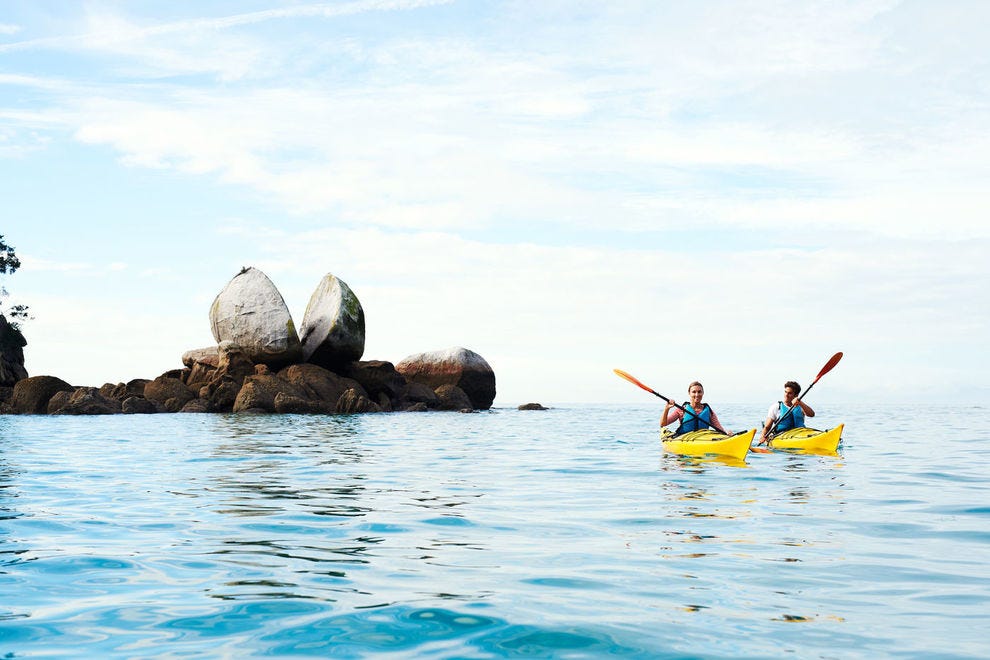 Abel Tasman National Park, the smallest park in New Zealand’s national park system, offers visitors a chance to explore the island’s coastal ecosystems by kayak, cruise or catamaran. Among the most famous landmarks in the park is Split Apple Rock, a granite boulder that resembles an apple cut in half. 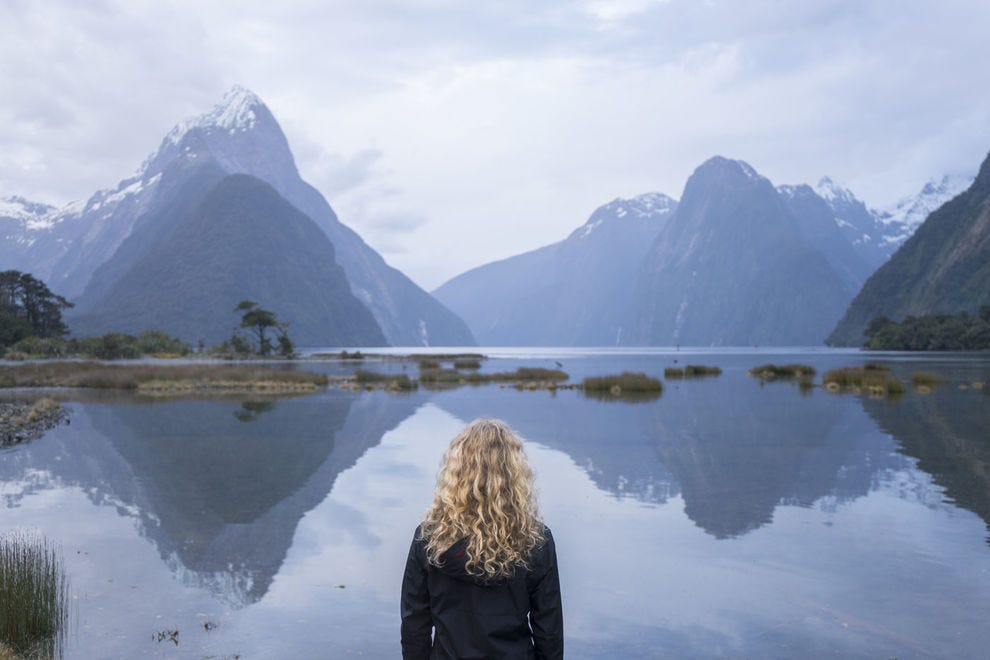 Photo courtesy of Will Patino / New Zealand Tourism Board

Milford Sound, located on the west coast of the South Island, was once described by Rudyard Kipling as the “eighth wonder of the world.” This glacier-carved fjord features cliffs rising as high as 3,000 feet above the water. 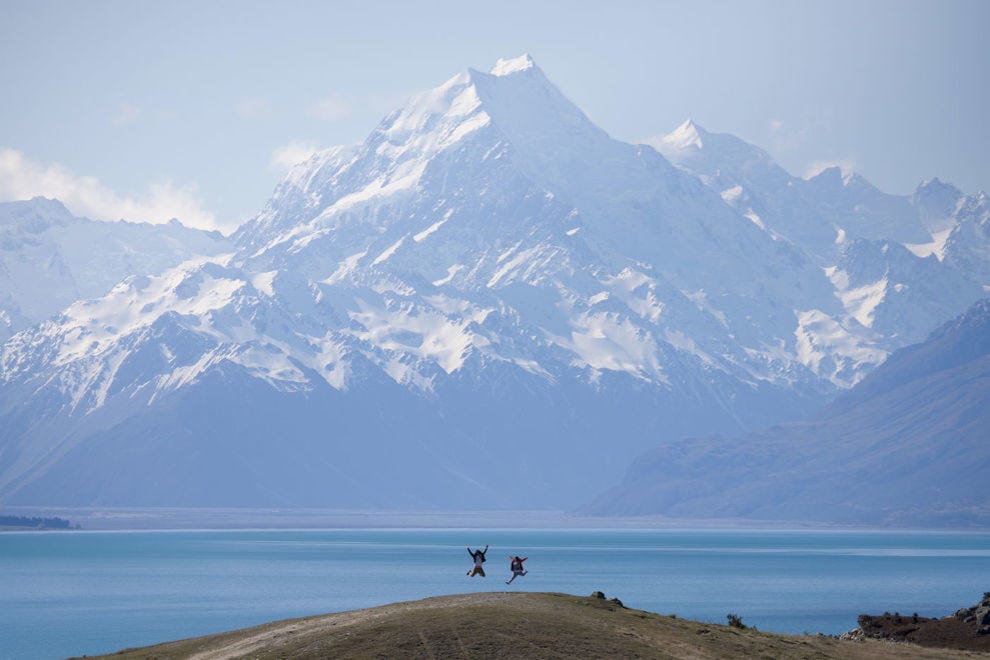 Photo courtesy of Will Patino / New Zealand Tourism Board

Aoraki, also known as Mount Cook, peaks at 12,316 feet, making it the tallest peak in New Zealand. You don’t have to be a climber to appreciate the beauty of Aoraki / Mount Cook National Park either. On a clear day, the snowy peak is visible from various alpine hiking trails. 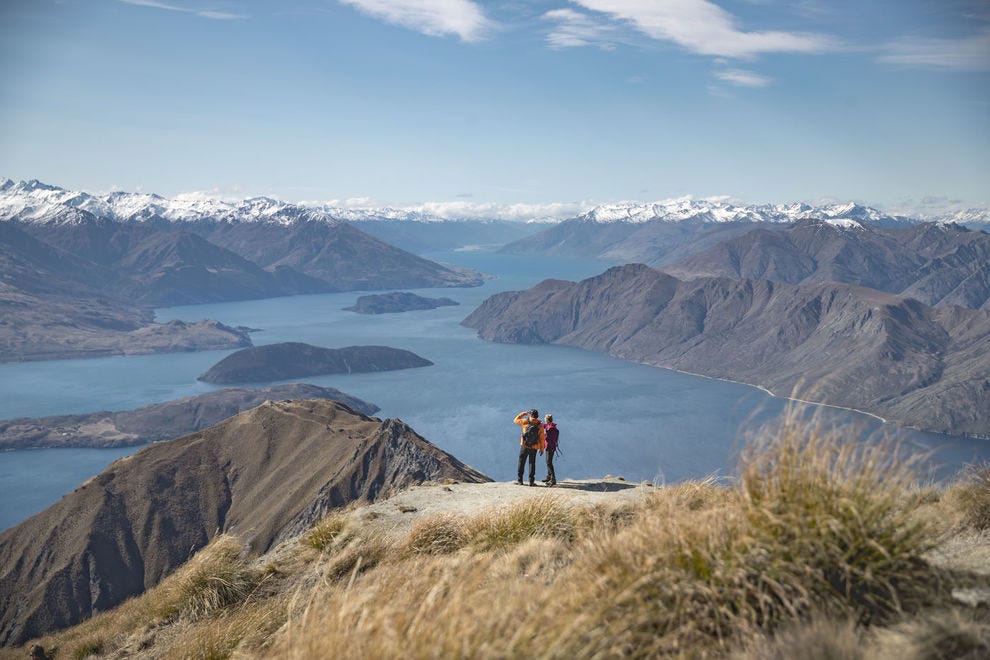 Hike the Roy’s Peak Track in Wanaka for one of the most spectacular views on the South Island. The trail passes through open tussock grasslands on the way to the summit, where hikers are rewarded with panoramic views of Lake Wanaka and the surrounding mountain peaks. 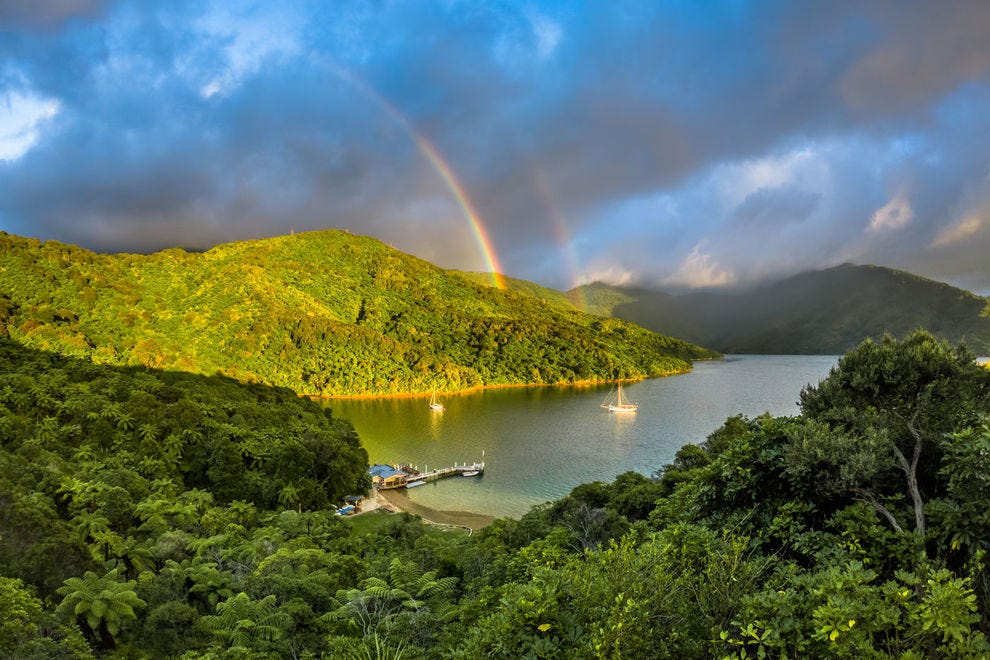 The Marlborough Sounds comprises nearly 1,000 miles of South Island coastline – a region of river valleys, sandy bays and sheltered inlets. Enjoy the views of the coast from the scenic Queen Charlotte Track, or explore on the water by kayak. 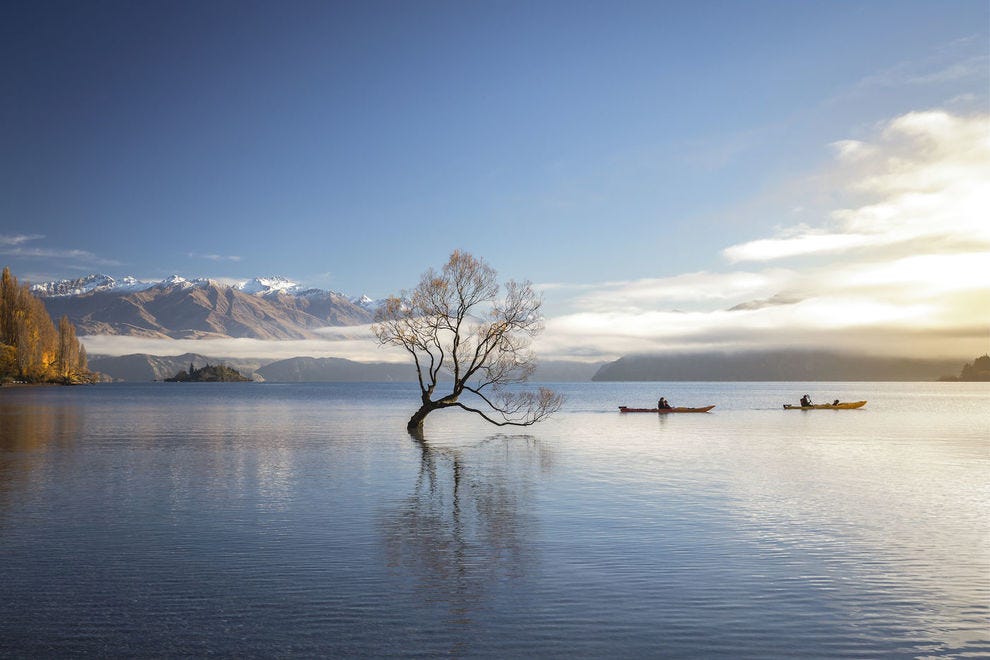 The South Island’s Lake Wanaka is home to a solitary tree thought to be the most photographed tree in the country. You’ll find it jutting up from the water near the lake’s south shore with the peaks of Mount Aspiring in the backdrop. 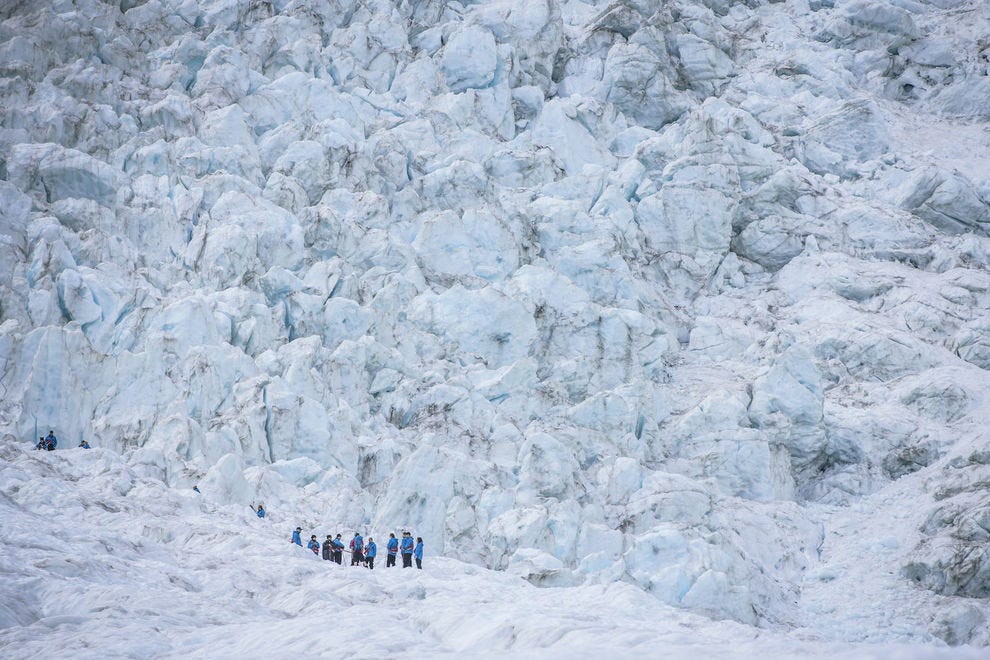 Geologist Julius von Haast explored Franz Josef Glacier in 1865 (though it had been previously explored by local iwi), naming it after the Austrian emperor. A trail from Franz Josef town leads to a viewing platform near the glacier’s terminal face. Visitors can get even closer by taking a guided ice walk or heli-hike. 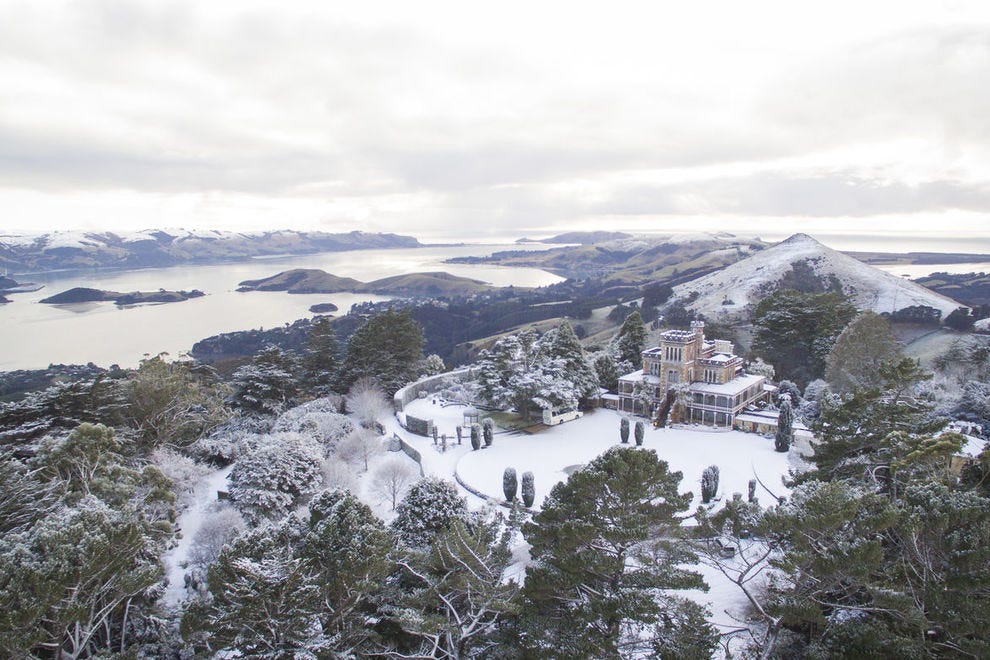 You’ll find New Zealand’s only castle on the South Island. Built in 1871 by banker and politician William Larnach, Larnach Castle offers a glimpse of Victorian life on the island. The castle gardens were recently selected as a Garden of International Significance. 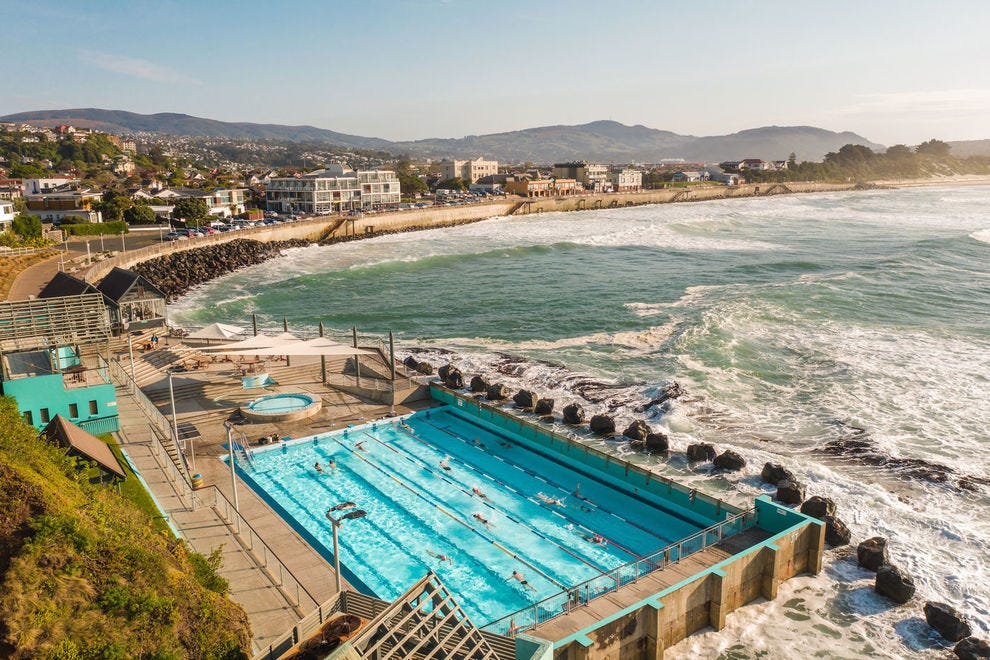 A day at the beach

Of all New Zealand’s beaches, St. Clair Beach on the Pacific coast offers the most consistent surf break throughout the year. The St. Clair Hot Salt Water Pool, located at the end of the beach, dates back to 1884. It’s one of the only heated seawater pools in the country. 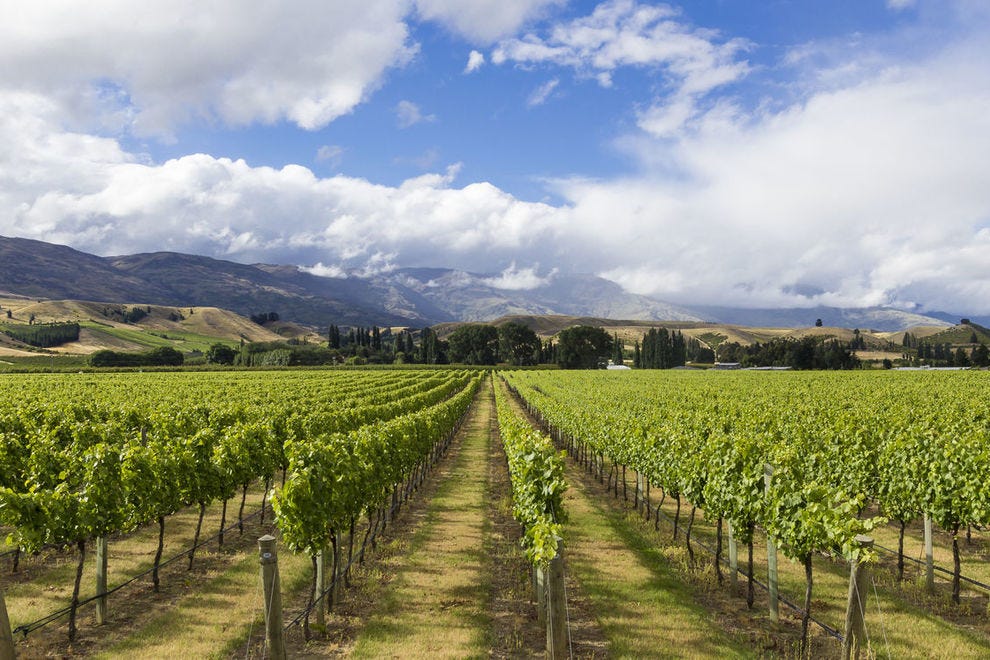 The sunny, dry weather of the South Island’s Central Otago region make it a prime spot for wine production. In addition to award-winning wineries, the area is rich in gold rush history and spectacular cycling routes. 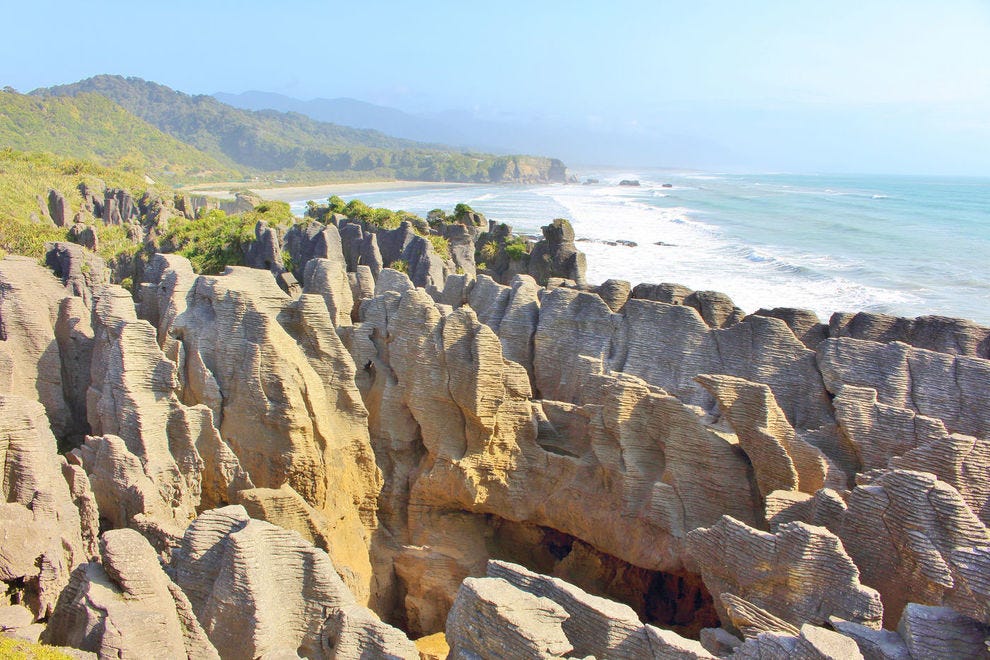 On the west coast of the South Island, Mother Nature has been creating a work of art for more than 30 million years. The geologic formation known as the Punakaiki Pancake Rocks resembles a stack of hotcakes, formed by layers of marine creatures and sand layered and compressed over millennia. 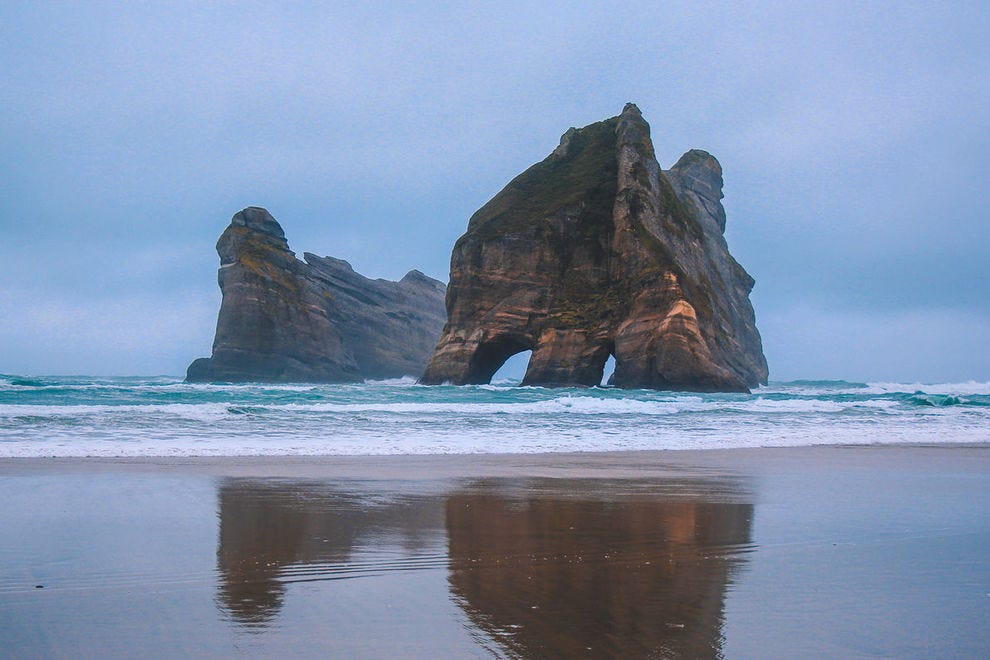 Wharariki Beach represents one of the most scenic stretches of coastline on the South Island, thanks in part to its sea stacks and rock formations. Keep an eye out for seals playing in the surf as you explore the beach’s caves and dunes. 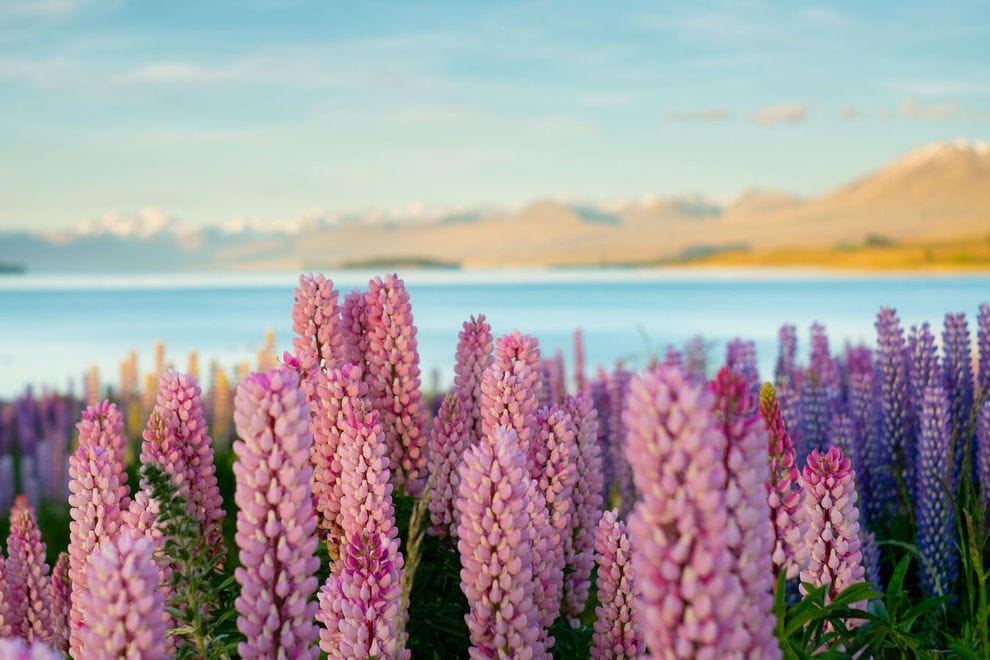 No image captures New Zealand in springtime better than that of pink and purple lupins blooming on the shores of Lake Tekapo. The flowering season is quite short, lasting from mid-November through early January. 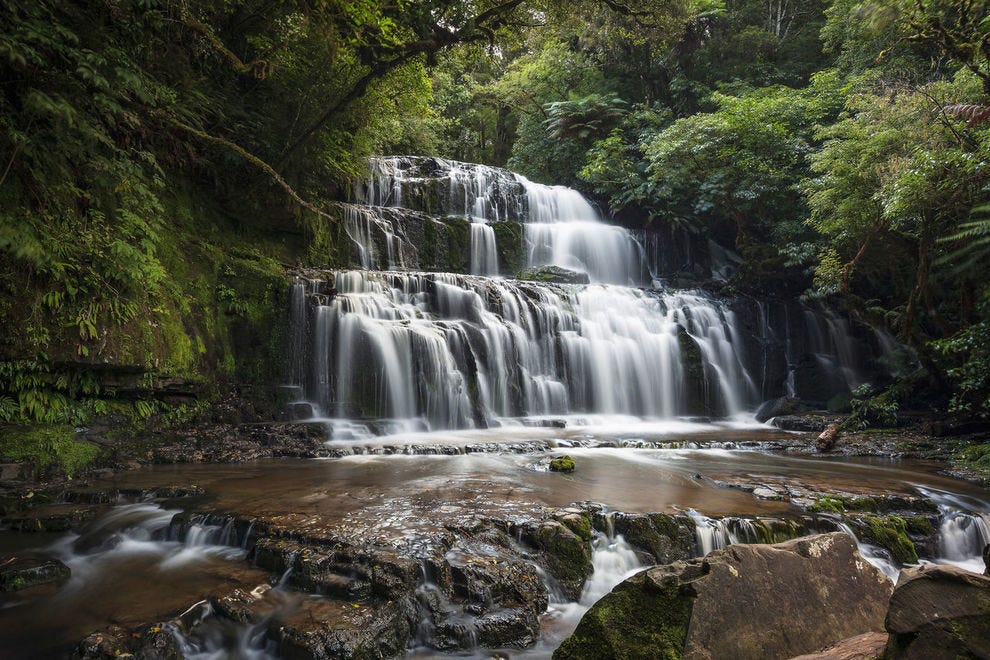 The Catlins region of the South Island is home to numerous spectacular waterfalls. Among the most famous is Purakaunui Falls which cascades 66 feet down three distinct tiers. 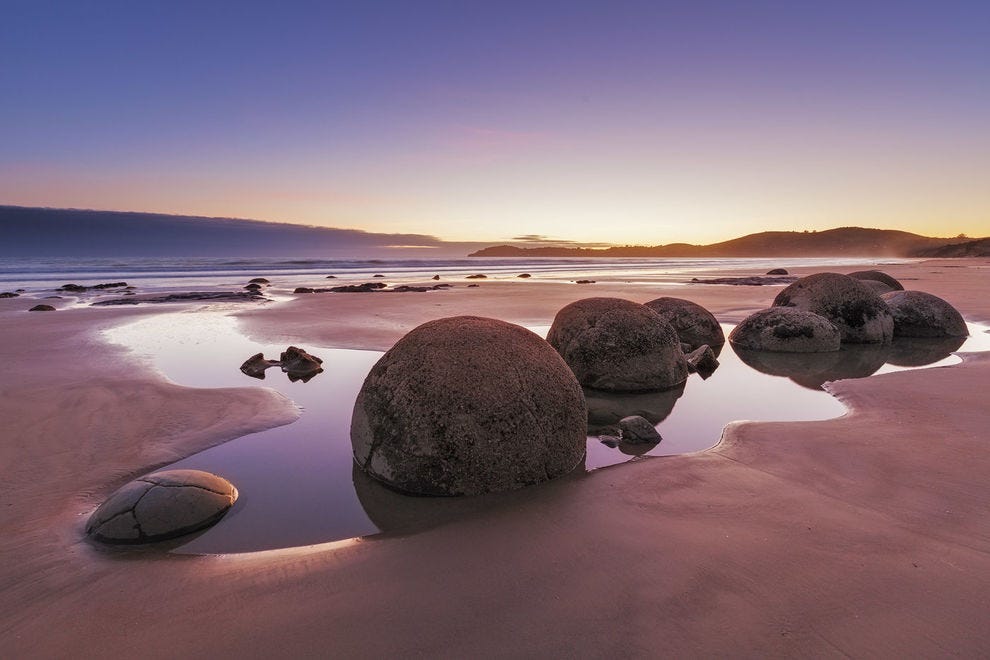 Visitors driving along the North Otago coast often stop to gaze at the Moeraki Boulders. These spherical stones lay scattered across a beach, each weighing several tons. According to local Maori legend, the boulders were gourds washed ashore after the great canoe Araiteuru wrecked hundreds of years ago.