September was the warmest on record, scientists say 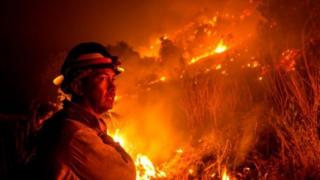 The elevated heat globally contributed to record wildfires in California

September was the warmest on record globally, according to the weather service Copernicus.

It was 0.05C hotter than September last year, which in turn set the previous record high for the month.

Scientists say it’s a clear indication of temperatures being driven up by emissions from human society.

Copernicus, which is the European Union’s Earth observation programme, said warmth in the Siberian Arctic continues way above average.

And it confirmed that Arctic sea ice is at its second lowest extent since satellite records began.

This year is also projected to become the warmest on record for Europe, even if temperatures cool somewhat from now on.

The elevated heat globally contributed to record wildfires in California and Australia.

Media playback is unsupported on your device

Media captionWhy forest fires in Siberia, Russia threaten us all

And it had a hand in the torrential downpours that inundated the south of France with more than half a metre of rain in a day.

The French met office said a downpour like this was expected once in 100 years – they had two in a week.

Samantha Burgess, from Copernicus, told BBC News: “Some of these events are extraordinary – although we mustn’t create a false expectation that temperatures will go up year on year.

“Climate and weather are highly variable. But we predicted that these sort of events would happen, given our effect on the climate.”

Weather records are always being broken naturally, but meteorologists say they’re disturbed by some of the new extremes.

The UK is not immune. It enjoyed its sunniest Spring on record; August saw a record number of days overtopping 34C; and the town of Reading has just endured its wettest ever 48-hour period.

Ed Hawkins, from Reading University, told us: “We have been saying this for decades – more and more greenhouse gases will lead to more and more warming.”

He warned these events are being experienced with just one degree of warming globally above the long-term average, while under current rates of decarbonisation the world is heading for three degrees.

“One degree of heating is dangerous for some people, as we’ve seen,” he said. “Two degrees is more dangerous still, and three degrees even more dangerous. We really don’t want to find out what that’ll be like.”

The records were released as the UK Prime Minister Boris Johnson said the UK would combat climate change by becoming the Saudi Arabia of wind energy.

His speech was welcomed by environmentalists, but critics said he needed to back up his promises with policies and budgets.

Hottest September on record: Could 2020 be the world's warmest year ever?