September’s normal increase in coughs and colds caused by schools going back is causing ‘utter chaos’ in the UK because people are terrified of Covid-19, according to a top scientist.

Professor Carl Heneghan, an evidence-based medicine expert at the University of Oxford, today vented his frustration about the ‘panic’ being stirred up over the coronavirus crisis.

Meeting with MPs on Parliament’s Science and Technology Committee, he insisted coughs and colds spike every September when children head back to class, and become even more common during the winter.

But Government messaging about the deadly consequences of Covid-19 and forcing entire towns and regions into lockdown – rules that now cover 9.2million people – have left members of the public ‘fearful’ and ‘terrorised’.

He said there has been a 50 per cent increase in reports from family doctors seeing patients with chest infections that have the same symptoms as the coronavirus.

Professor Heneghan’s comments come as the Government is complaining of skyrocketing demand for coronavirus tests from people who are worried they have it.

National test-processing laboratories are crumbling under the pressure of the more than 200,000 swabs per day they are being inundated with and people are even turning up at A&E departments or queuing outside test centres desperate to be seen.

The Oxford scientist said coughs will continue to surge into the winter months and there will also be a spike in deaths and people in hospitals – some will be caused by coronavirus, he said, but most won’t.

He argued the virus is not circulating at epidemic levels and, if it were cold or flu cases, current levels would not be out of the ordinary.

In his meeting with MPs today, Professor Heneghan said: 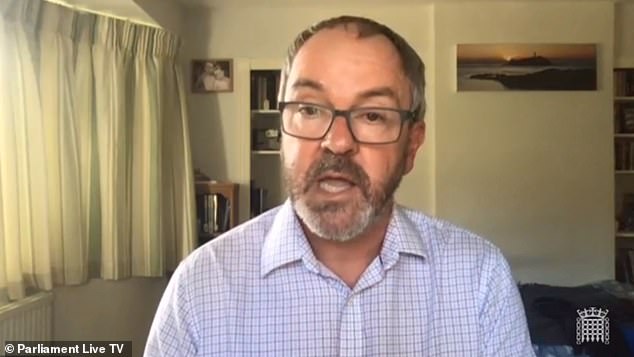 ‘Keeping our children in school is important but at the moment it is utter chaos because of the 50 per cent increase in other respiratory pathogens that mimic Covid in children,’ Professor Heneghan said.

He refers to illnesses that produce similar symptoms to Covid-19, which are usually viral infections referred to as respiratory tract infections, or chest infections.

Cases of these spike every winter because people spend more time indoors close together, and coughs and sneezes spread them easily.

And they are rising now, Professor Heneghan pointed out, because children are returning to school and mixing more with others every day. This would happen regardless of the Covid-19 outbreak.

But because the symptoms are so similar – coughs, breathing difficulties, feeling wheezy, or fever – people think they or their children might have Covid-19.

As a result, demand for tests is going up. As more people get tested in an area, more cases get discovered that otherwise might not have, making infections look higher.

Professor Heneghan argues that increased testing is leading to more cases, which is stoking fears that a deadly resurgence of coronavirus is coming, akin to the one that sent the country into lockdown.

‘I want to explain what happens in September,’ he said. ‘We’ve seen in the RCGP [Royal College of General Practitioners] surveillance data, a 50 per cent increase in consultations for acute respiratory infections.

‘When you go back to school, when you open up business and when we come back off our holiday, there is a highly predictable increase in acute respiratory pathogens.

‘That leads to a near three-fold increase in [emergency] admissions for children in September alone, so it’s important to say you’re acting against the backdrop of what happens in September for all acute respiratory pathogens.

‘Out of the 200,0000 people who are coming forward [for Covid-19 tests] it looks like about 25 per cent are asymptomatic when they come forward, and about 150,000 have some discernible symptoms.

‘Of them, 97 per cent have some other acute respiratory pathogen on board and about three to four thousand have Covid, so let’s get the context in place.’

Public Health England data shows a rise in appointments where doctors have seen people with illnesses that look like Covid-19, but they are nowhere near levels seen in March and April

The numbers of people going to doctors with chest infections can be seen starting to rise sharply in September, and the annual average (dotted line) shows that it spikes every year, even before coronavirus

The same is true of lower respiratory infections, which also cause coughs and breathing difficulties

Doctors will also start to see increasing numbers of people with flu now that winter is approaching. Flu causes similar feverish symptoms to Covid-19, too

The Tory peer, who is chief of the Test & Trace system, revealed the staggering mismatch between the number of people wanting tests and the ability to carry them out as she claimed 27 per cent have no symptoms.

Extraordinarily, she said no-one had ‘expected’ the ‘sizeable’ increase in demand – although it was widely predicted, blaming SAGE for getting their estimates wrong.

Lady Harding has been hauled before MPs to explain the shambles that has left thousands struggling to get checked.

She told the Science Committee that she did not have precise numbers for how many people wanted tests. But she said phone calls and website visits suggested it was ‘three to four times the number of tests we have available’.

Brazenly passing the buck for the chaos, Lady Harding said: ‘We built our capacity plans based on SAGE modelling for what we should be preparing for in the Autumn.’

Lady Harding confirmed the capacity now for diagnostic tests is just under 243,000 per day – a figure that the government has failed to publish for more than a week. Thousands of tests could be sent abroad to be processed to deal with a ‘surge’, she said.

She said the government was ‘on track’ to increase capacity to 500,000 antigen tests a day by the end of October.

And she conceded that will not be enough. ‘I am certain we will need more as we go beyond the end of October,’ she said.

Professor Heneghan argued that Covid-19 is not actually circulating at levels that would be considered an epidemic.

Although Government and council officials have been racked with fear about infection rates rising to 70 or 100 or even 200 cases per 100,000, Professor Heneghan played down the numbers.

He said: ‘When you talk about infections and epidemic in terms of general practice – and this is a long-established number – we talk about 400 per 100,000 consulting constitutes an epidemic. And that’s symptomatic people.

‘So when you talk about 200, 250, you’re still in the same ballpark of a seasonal pathogen.

‘For instance I looked at Bolton NHS Trust and saw that there were two patients with Covid in hospital there right now. So I think that’s where you start to provide context as opposed to just throwing the number.

‘And I think we do need to have now more data that allows people to put the information in context as opposed to just seeing a number, think it’s rising and then panic.’

The panic being stirred up by regularly-referenced infection rates was a sticking point for Professor Heneghan, who has repeatedly come out against strict lockdown measures.

He has argued that a second wave will not arrive like the first one, and that people must be allowed to get on with life as normal as much as possible, while efforts are made to protect vulnerable people such as the elderly.

Taking aim at the Government’s attitude to the virus, he said people had been left too scared of the virus to get back to normal, particularly in schools.

He referenced a case where a Year 13 student was thought to have Covid-19 and their entire year group went into isolation before they had even been tested.

‘We’ve got restriction measures coming in now because nobody has a strategy,’ he said, adding: ‘What’s happening at the moment is the language and the rhetoric is making people so fearful, and terrorised that they’re going beyond the guidance because they’re so fearful of what’s coming next.