Sergio Ramos launched an x-rated tirade at former Real Madrid team-mate Achraf Hakimi in their victory against Inter Milan in the Champions League, according to reports in Spain.

The 34-year-old Madrid captain was left furious after the Moroccan went down claiming a penalty in the Serie A side’s 3-2 defeat by their LaLiga counterparts on Tuesday evening.

Now Movistar have published a video in which audio recording suggests Ramos yelled an expletive at the Inter defender, who joined the club from the Spanish capital side on a five-year deal for £36million in the summer. 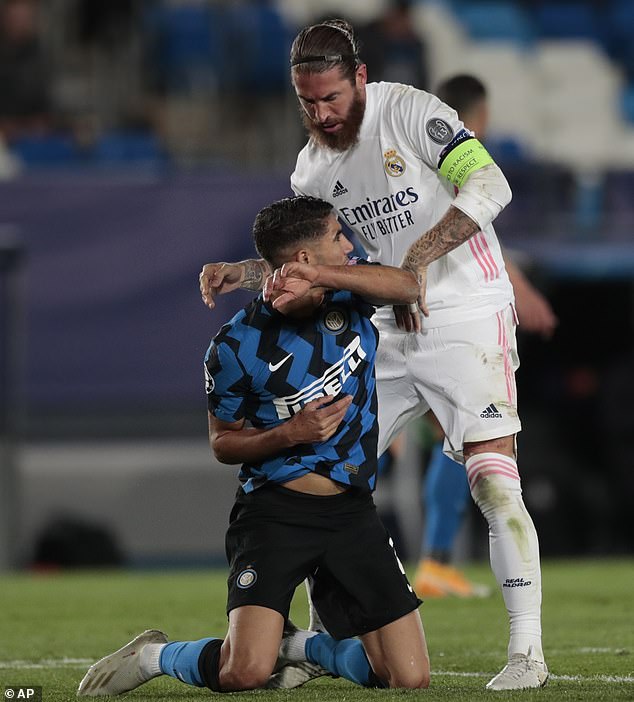 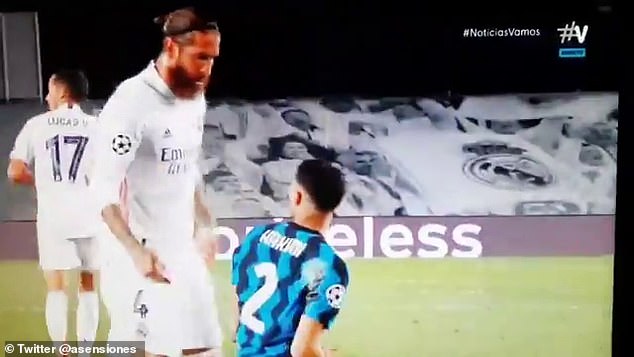 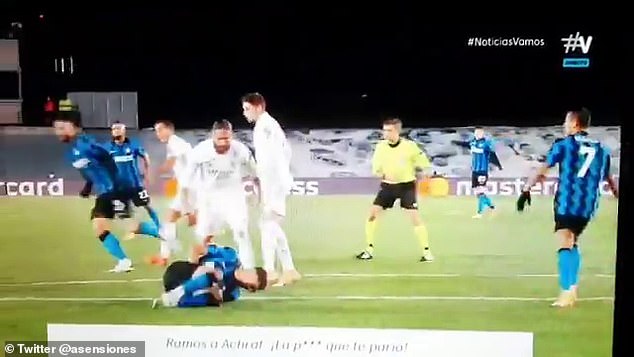 A video published by Movistar shows Ramos shouting: ‘Get up you son of a b****, get up!’

The Spanish outlet claims Ramos shouted: ”Get up you son of a b****, get up! Stop screaming like a rat,’ before attempting to drag the 22-year-old back to his feet.

Hakimi came up through the ranks at Los Blancos after joining the club’s academy in 2006, and went on to make his first-team bow three years ago.

The Morocco international and Ramos were team-mates during the 2017-18 season, when Hakimi made 17 appearances for Real Madrid alongside his then captain before being sent out on a two-year loan to Borussia Dortmund prior to him linking up with Antonio Conte’s men in the summer. 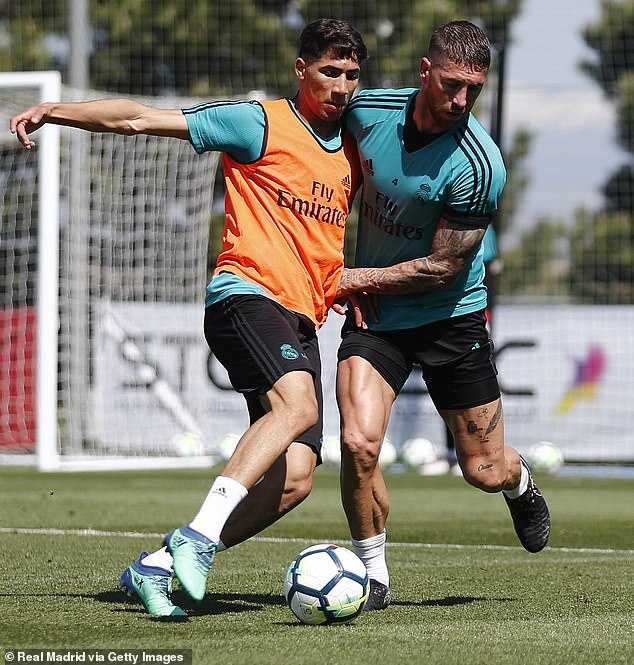 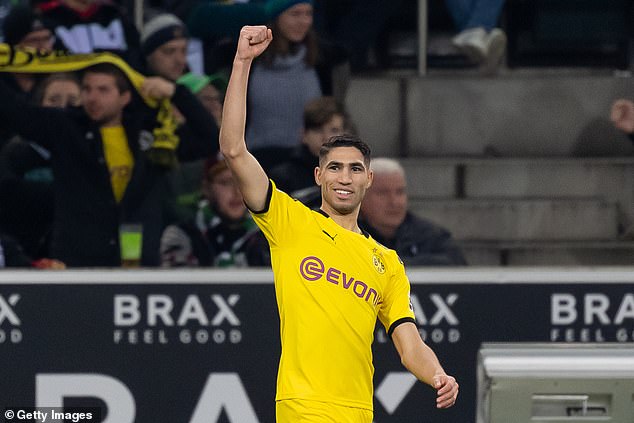 And while there was no love lost in the pair’s latest meeting, the incident came after Ramos had netted his 100th goal for Real Madrid with a header to put the hosts two goals up.

After reaching the landmark, Ramos – who joined the club from Sevilla 15 years ago – said: ‘It’s not bad.

‘Individual records are secondary, but you like hitting them and as long as they keep on helping the side win, hopefully I can get a few more.’ 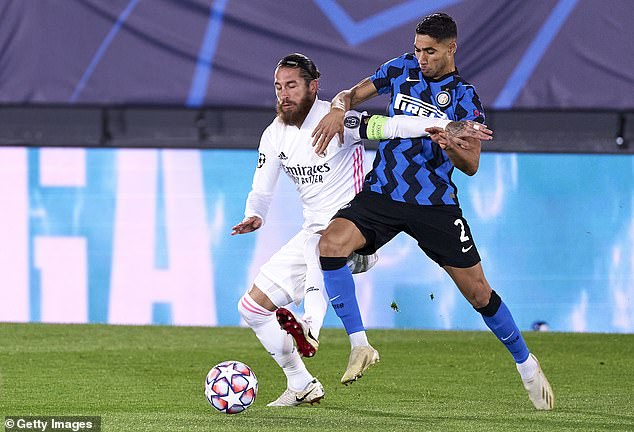 The Spain international – who has won 22 trophies at Madrid – is out of contract though at the end of the season, and reports now suggest talks have finally been opened between the two parties over an extension.

The reports suggest Ramos wants a new deal to keep him at the Santiago Bernabeu until 2024, and boss Zinedine Zidane revealed after the Inter win that he is confident he will not lose his star defender.

‘As always, he is our captain, our leader,’ Zidane said. ‘We want him here forever. I have no doubt that he will stay and continue to make history.’ 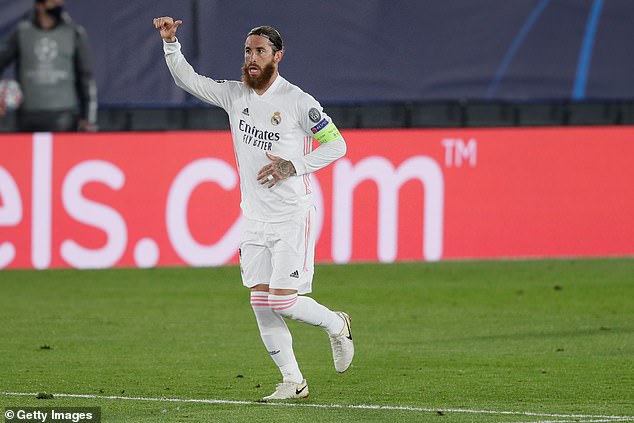 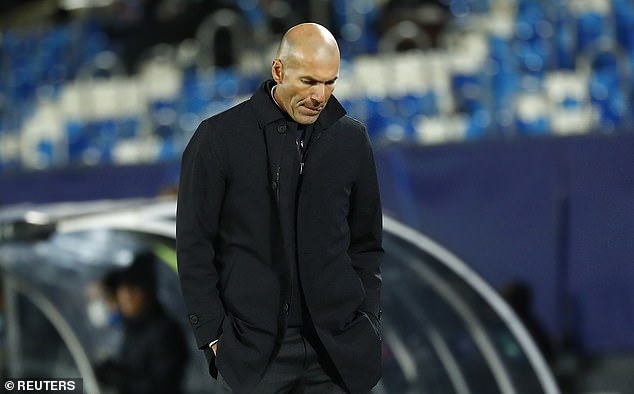 Zinedine Zidane is confident he can keep Ramos, who is out of contract at the end of the season

On what grounds is Trump taking legal action in Wisconsin, Michigan, Georgia and Pennsylvania?

Plummeting temperatures saw snowfall across swathes of the UK and Britons took the opportunity to head...