The Argentine was regarded by many as the best No 2 stopper in the Premier League last season but he has been omitted from United’s Premier League and Champions League squads this term.

A deadline day move to Everton collapsed and now Romero wants United to terminate his deal, according to the Daily Star.

The 33-year-old has held talks with United over his future and wants to leave so he can secure game time elsewhere.

Romero is understood to be earning £100,000-a-week and this is the final season of his contract at the club.

He is considering his next move with a return to his homeland or switch to MLS on the cards. 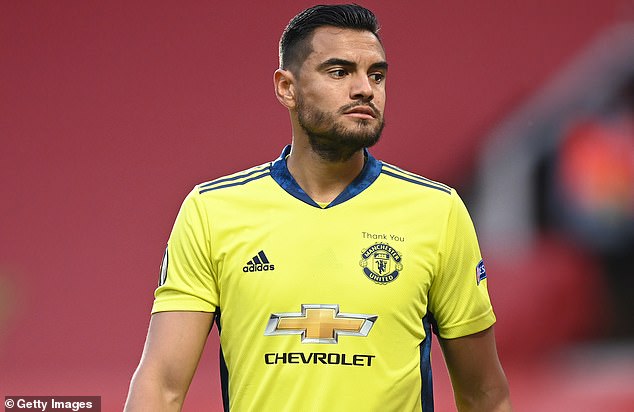 Romero began his career at Racing Club de Avellaneda in Argentina and their chief Victor Blanco has spoken publicly about bringing the keeper back.

‘I dream of bringing Chiquito [Romero], but he has to come with the conviction of wanting to return, knowing that he’s not going to earn in dollars or the amount of money he earns in Europe’, he said on Radio Colonia.

With Jordan Pickford under pressure at Everton, it had looked as though Carlo Ancelotti would bring in Romero at the 11th hour of the transfer window.

But the deal fell through and his wife Eliana Guercio was enraged, posting on Instagram: ‘Sergio Romero worked hard for his club. Last trophy they won [the 2017 Europa League], they lifted it with him.

‘He helped the team reach four finals / semi-finals and then he was left on the bench only to lose them all.

‘It is time for them to return the opportunity and let him go. RESPECT FOR ONCE!’

ESPN reported last month that Romero’s United team-mates were disappointed at the way the situation was handled too, believing the goalkeeper deserved better treatment. It seems unlikely he will play another game for the club.