Seven children were killed this morning in a school shooting in the Russian city of Kazan.

Children leapt from third-floor windows in a desperate bid to escape the attack which was carried out by a 19-year-old former pupil.

Horrific videos showed young children covered in blood lying on the grass outside the school as their weeping parents and paramedics tended to them.

An explosion was also reported by terrified pupils who fled the carnage which started at 9.20am.

Footage showed the teenage suspect, named locally as Ilnaz Galyaviev, being pinned to the ground outside by a police officer.

Before the attack he posted a chilling photo to social media, calling himself ‘god’ and saying he wanted to rid the world of all human beings.

Despite earlier reports of multiple gunmen, Rustam Minnikhanov, president of the Tatarstan region, said: ‘We have lost seven children … four boys and three girls. And 16 people, 12 children and four adults, are in hospital.

‘The terrorist has been arrested. He’s a 19-year-old who was officially registered as a gun owner.’

It was possible the toll would rise. Twenty-one people were taken to hospital with wounds after the attack, including 18 children, six of whom were in intensive care.

Vladimir Putin ordered an urgent review of gun control laws in the country where shotguns, semi-automatic rifles and handguns are legal.

The president was ‘taking into account the weapon’ used in the attack, Kremlin spokesman Dmitry Peskov told reporters, though he did not specify which type of gun that was.

Crowds of anxious parents gathered outside the school this morning, some were seen weeping as children were loaded into ambulances while others watched on as firefighters helped children clamber down ladders.

One pupil said that they were ordered to lock their classroom doors by the headteacher over the loudspeaker system before they heard shooting erupt.

He said he saw a cleaner and a guard who had been shot while trying to prevent the gunmen from gaining access to the school were more than 700 children and 52 teachers were at work. 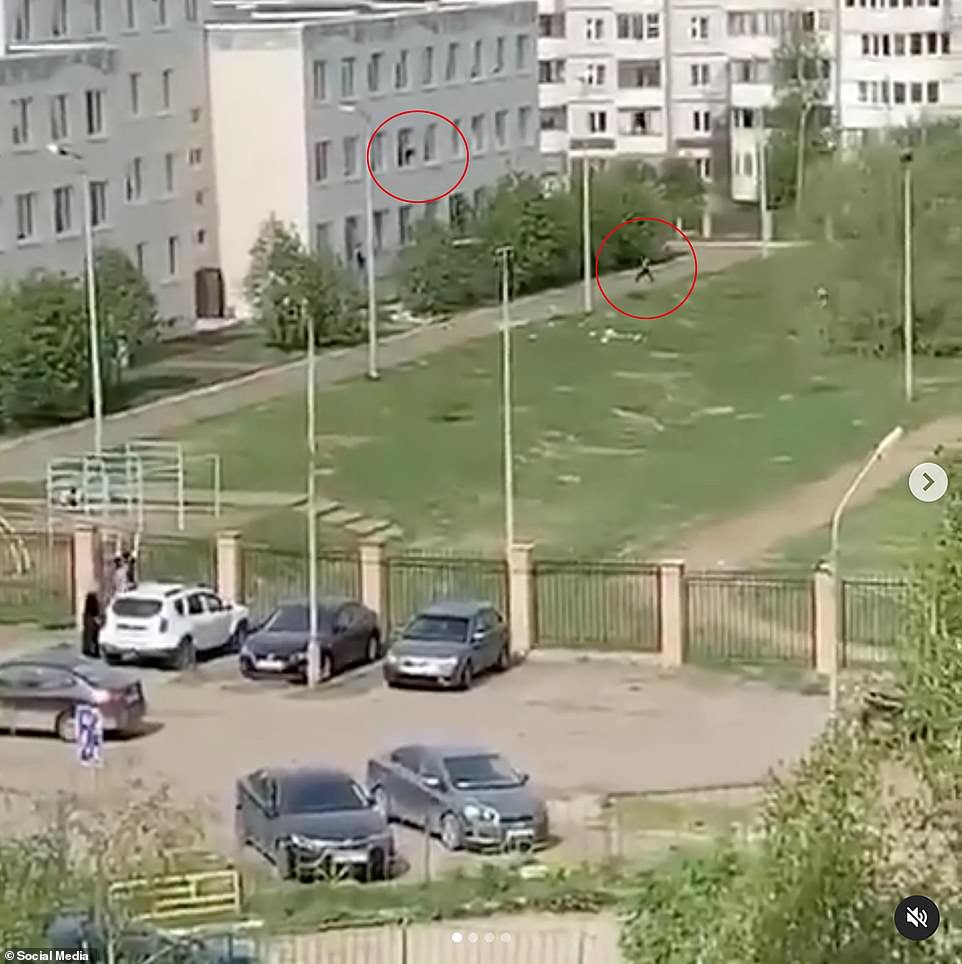 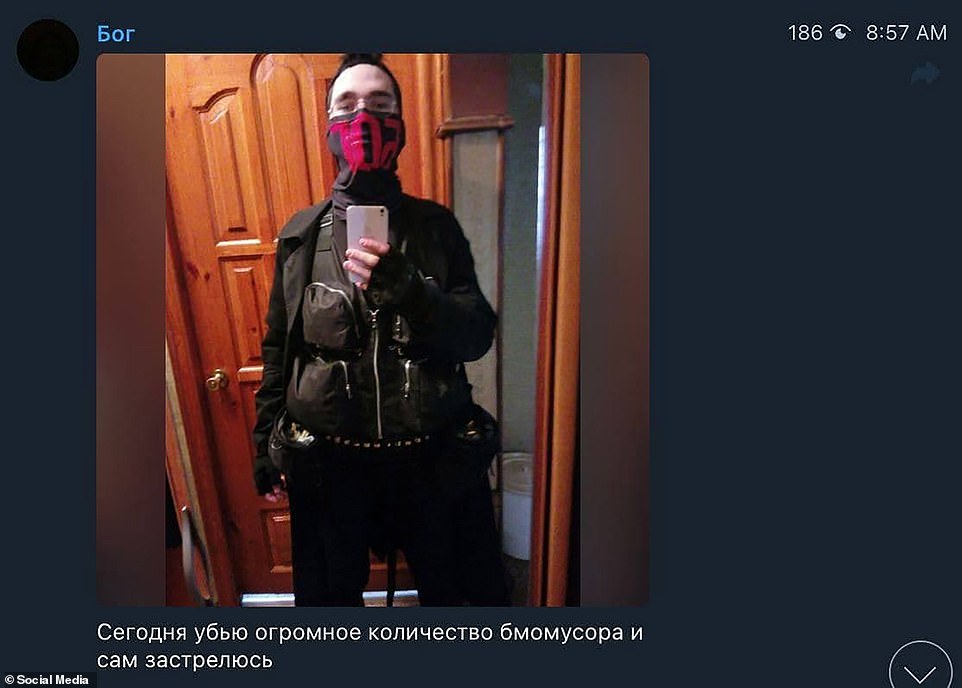 Footage showed the teenage suspect, named locally as Ilnaz Galyaviev, being pinned to the ground outside by a police officer. Before the attack he posted a chilling photo to social media, calling himself ‘god’ and saying he wanted to rid the world of all human beings 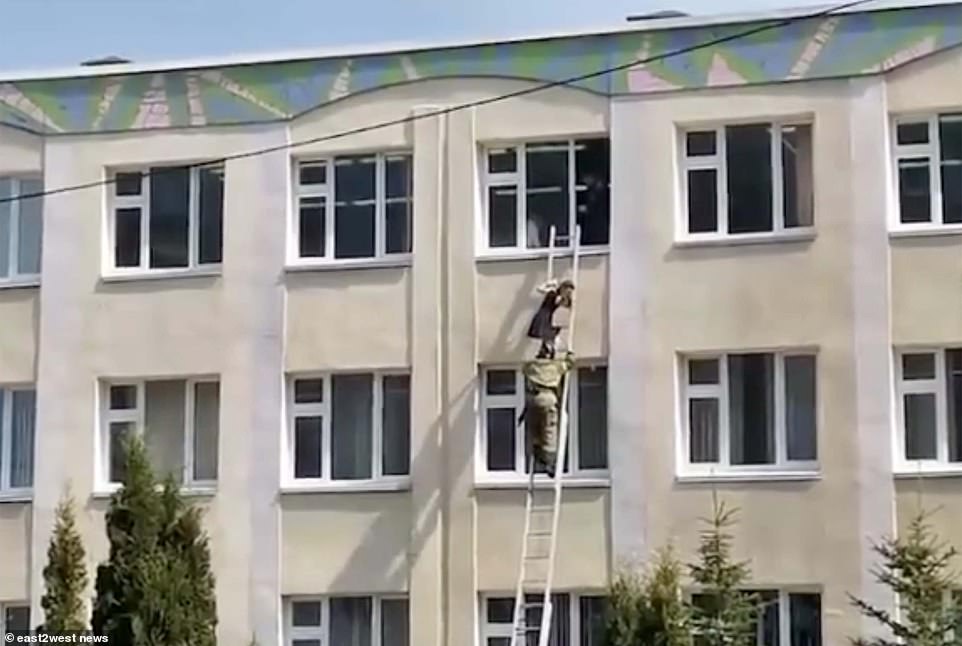 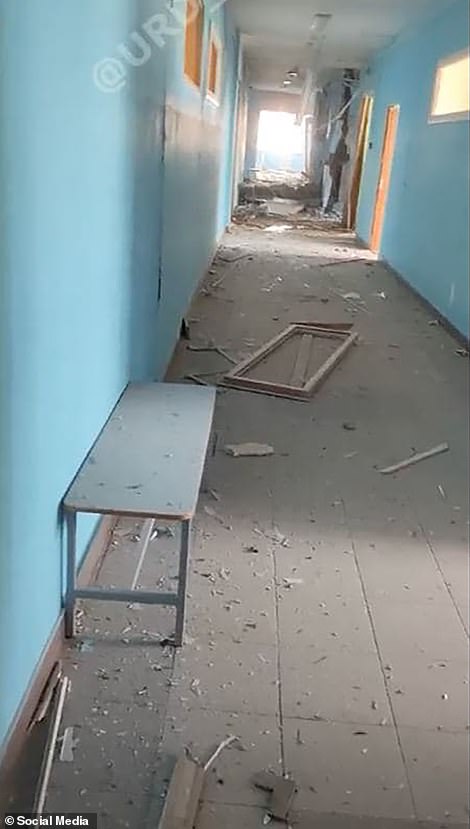 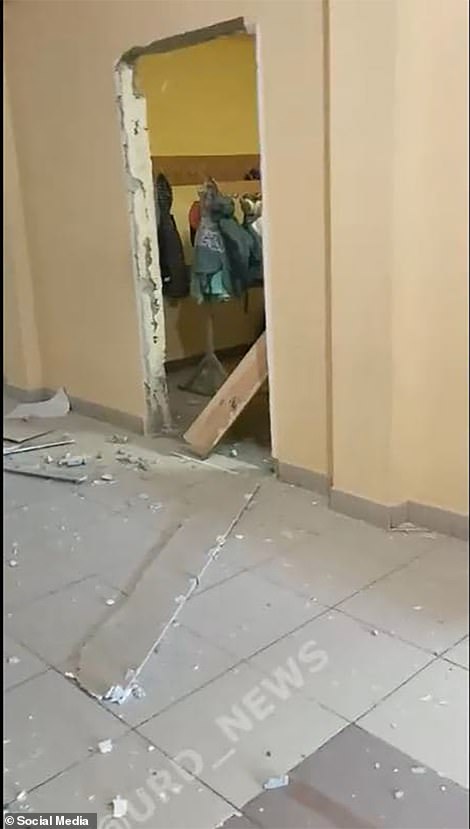 The aftermath of the shooting shows plaster, dust and wood scattered across the floors 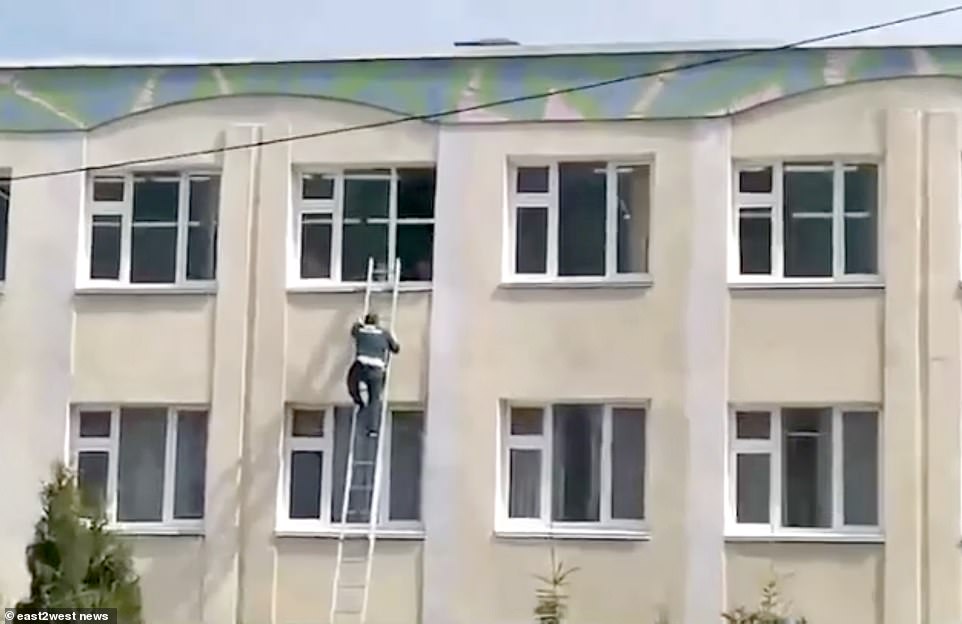 Teachers and pupils were evacuated from the school by ladder 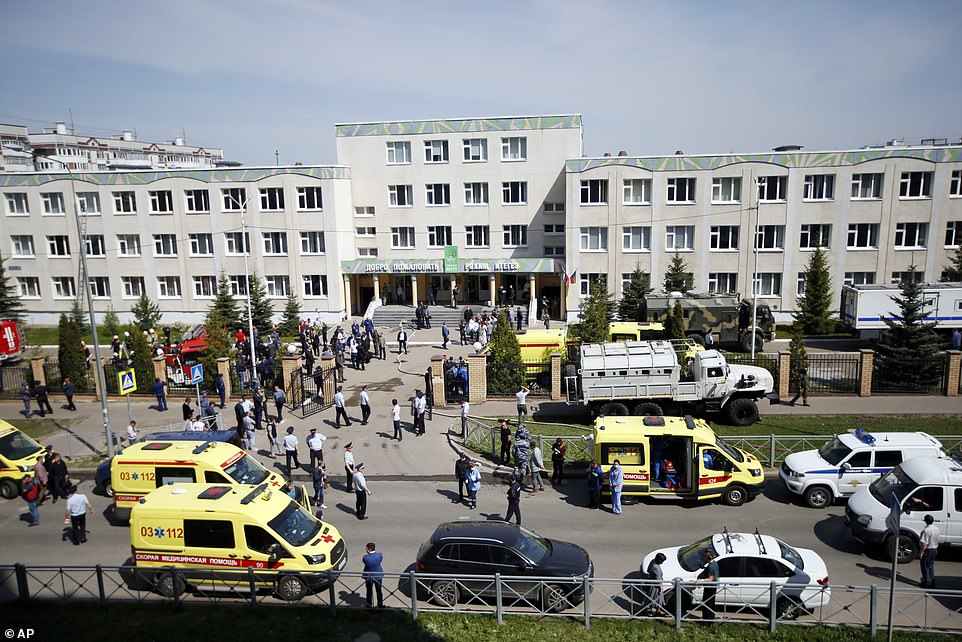 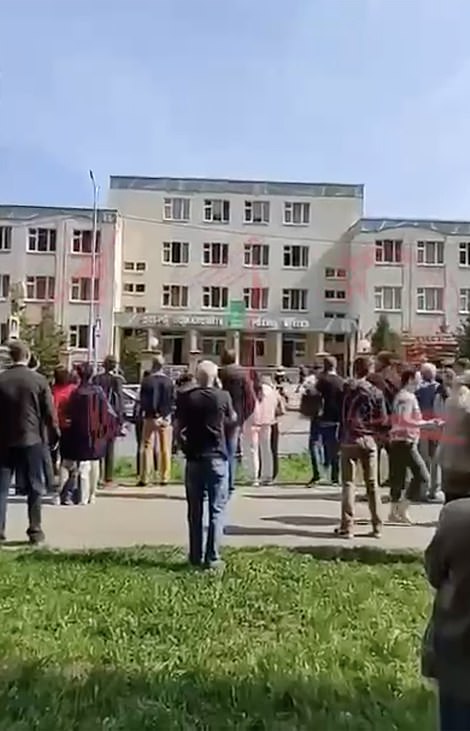 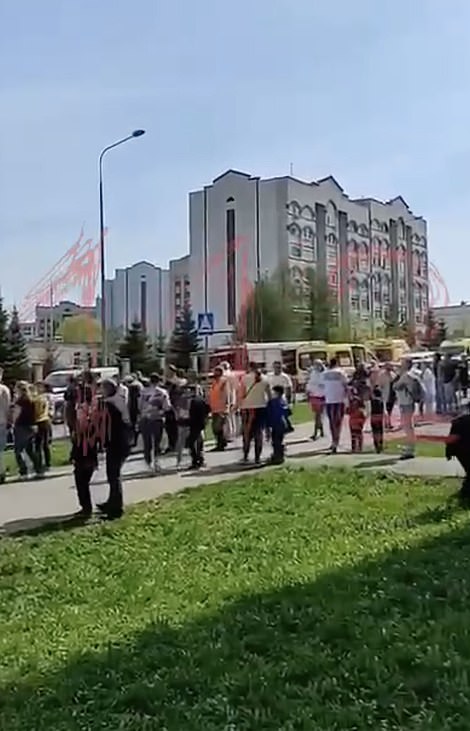 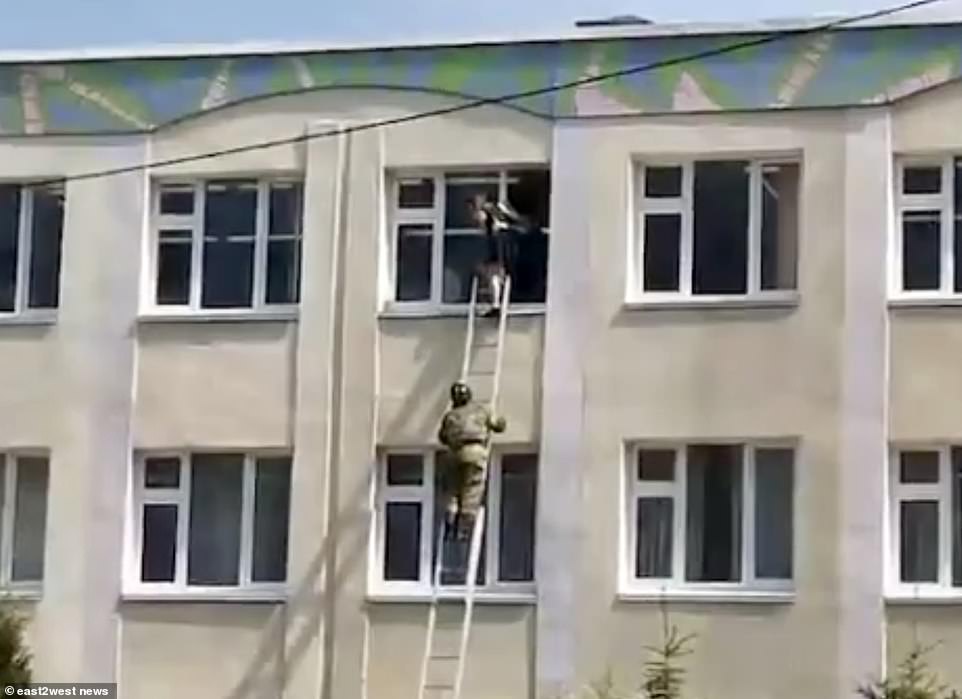 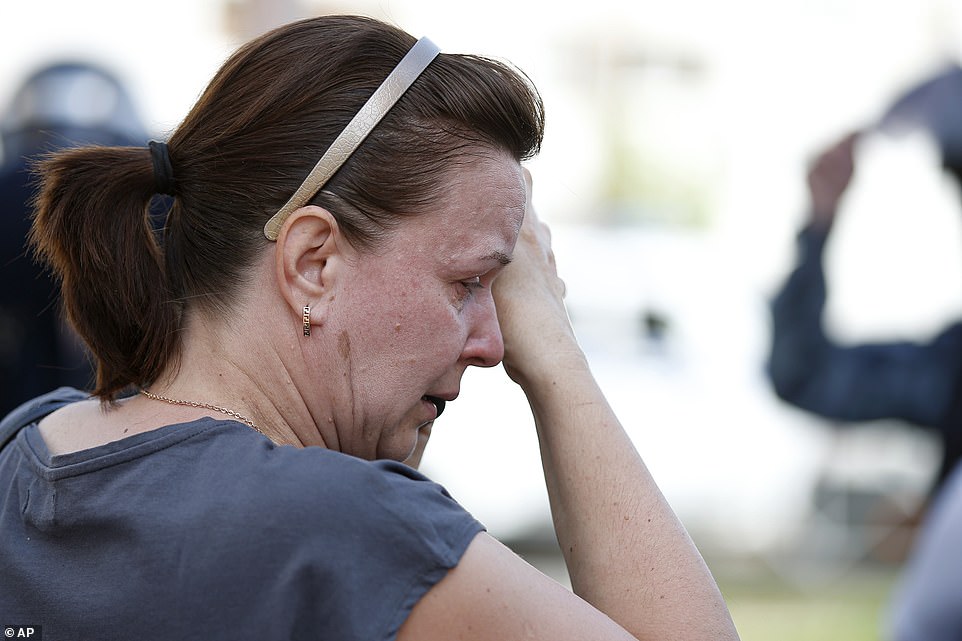 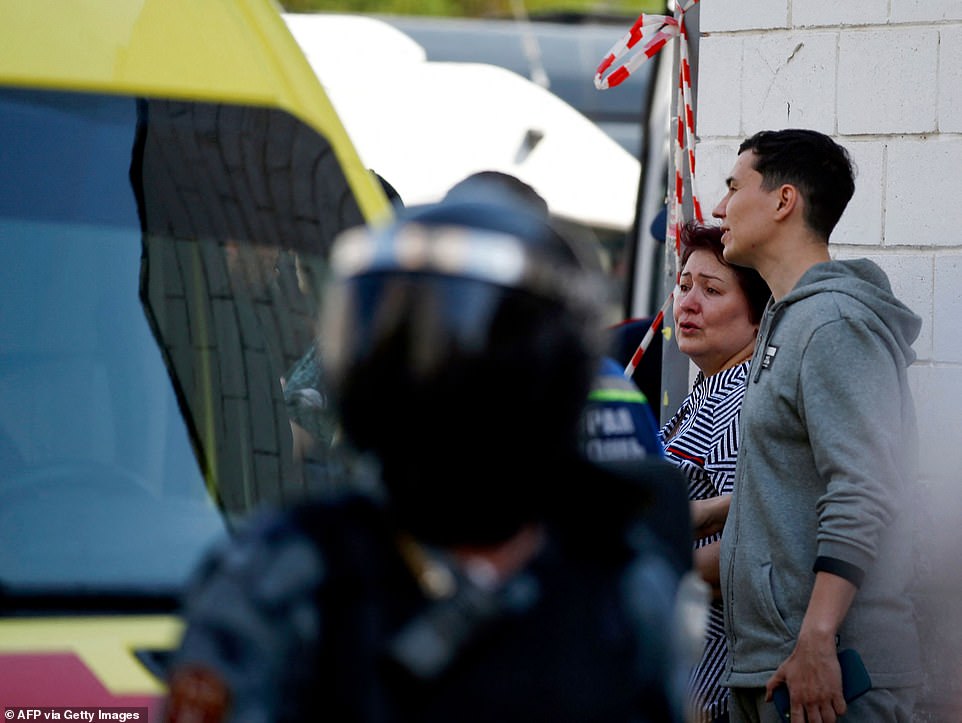 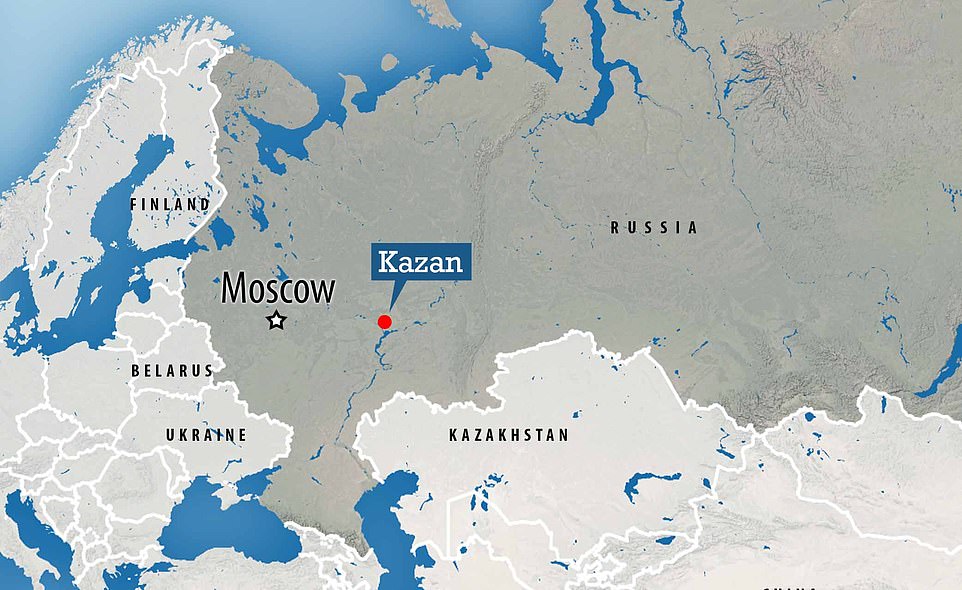 Kazan is the capital of mainly Muslim Tatarstan, an oil-rich region on the Volga River.

The youngster told local media: ‘We were sitting on the third floor, we had a history lesson.

‘Suddenly, in the middle of the lesson, the headmistress starts shouting into the loud speaker so that no one would open their doors.

‘The class teacher quickly closed the door and literally five seconds later a big explosion went off, either on the first or on the second floor.

‘We stayed together and did not open the door to anyone, but they burst into it – shots were heard, banging on the door, as if someone was trying to knock it out.

‘After some time, we heard the riot police and the the deputy head shouted to us to open it.

‘Firefighters came in and took us out.

‘I don’t know who did the shooting, and nobody knows.

‘Some say they are terrorists, others say that they are eleventh graders.

‘I don’t know who they killed, but they killed the cleaner and the guard for sure – they tried to keep them out of the school.’

A 15-year-old boy told local media: ‘Everyone started panicking and saying ‘shut the doors.’ About a minute later the headteacher started yelling: ‘We’re shutting the doors!’

‘We got out about 15 minutes later, not out of the windows. I wanted to do that, but the teacher closed the window immediately and said no.’

Galyaviev, who left the school four years ago. He is reported to have killed seven eighth graders – aged 13 to 14 – and a teacher.

Galyaviev, who reportedly told officers he had learned to make bombs online, left two unexploded devices inside the school building.

When he was detained, he said that he had planted a bomb at the place he lives. The apartment block has been evacuated so that the bomb squad can make checks.

In a chilling message posted online before the attack, he wrote: ‘Today I will kill a big amount of bio trash and will shoot myself.’

Photos from his social media accounts showed Galyaviev wearing a mask emblazoned with the word: ‘God.’

Other messages read: ‘As god, I want everyone to admit they are my slaves.

‘You have to do absolutely everything that I want. I want each of you to kill 10+ and kill themselves. There should be no one living, this is the universe’s mistake.’

He also wrote: ‘I came to this world as a human to get rid of all of you.’ 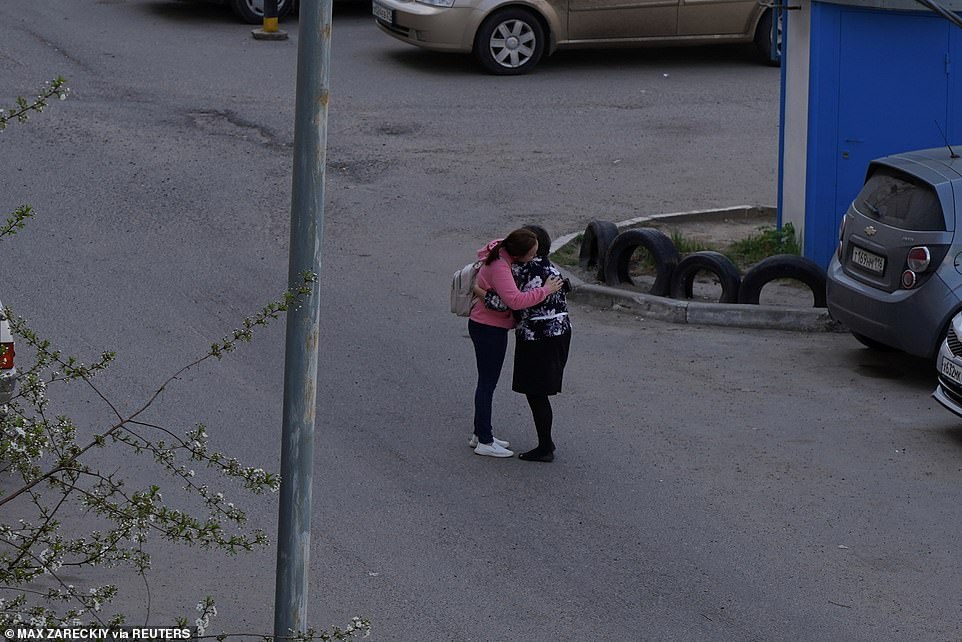 A mother embraces her child after the school shooting on Tuesday 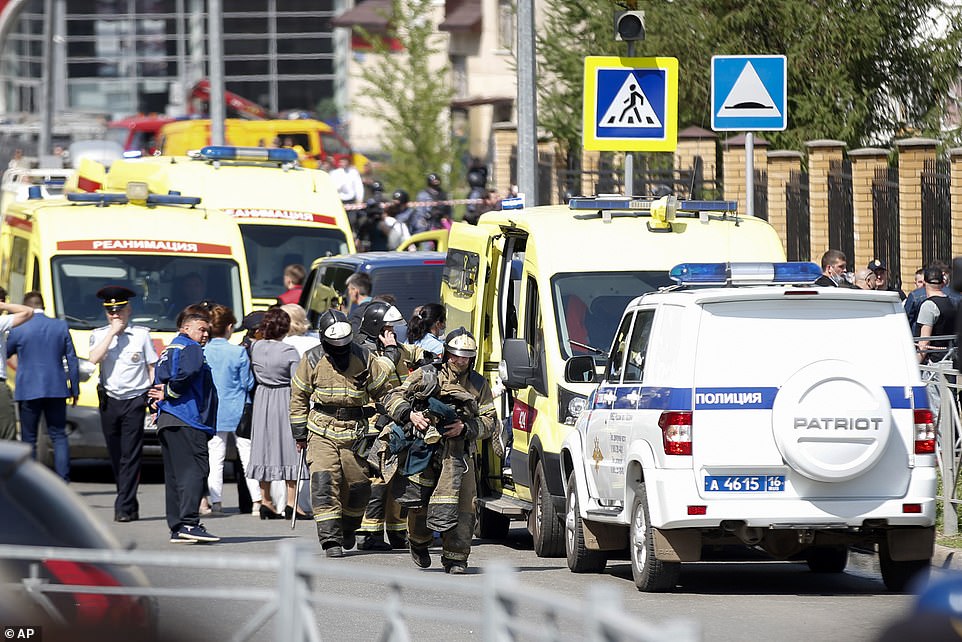 Firefighters outside the school gates this morning 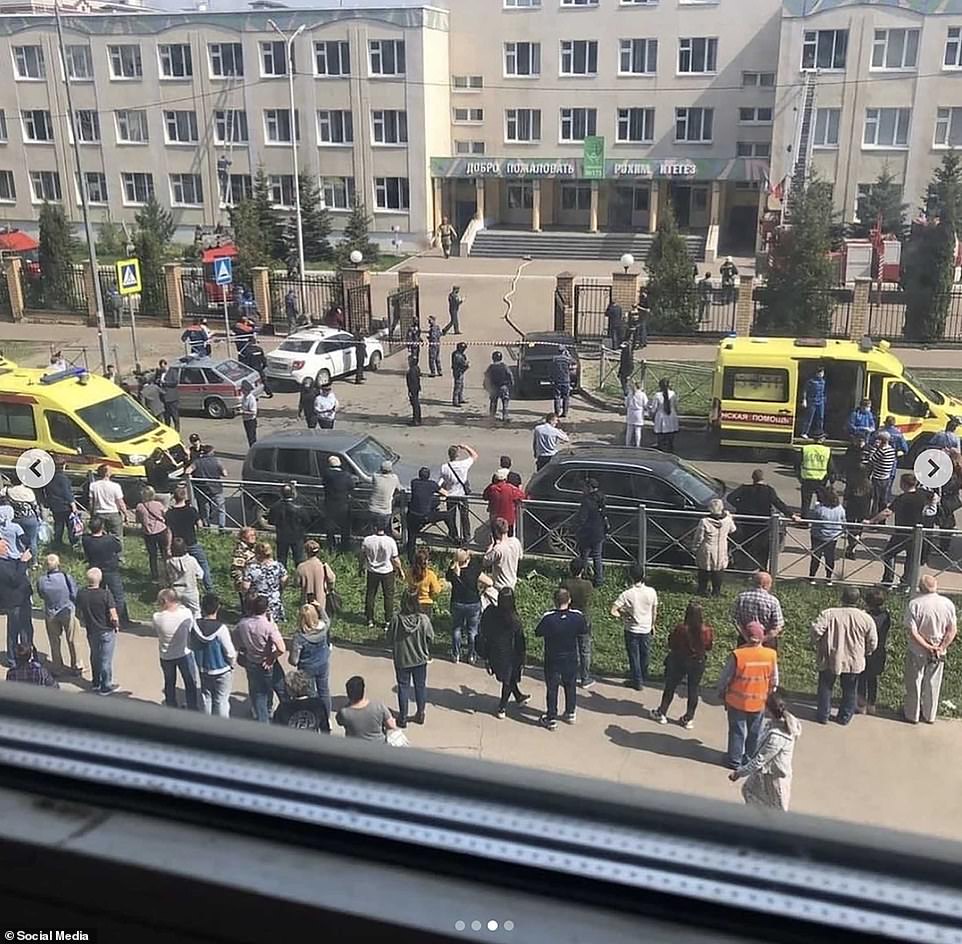 Concerned locals, including parents, wait outside the school as ladders are propped up to third floor windows 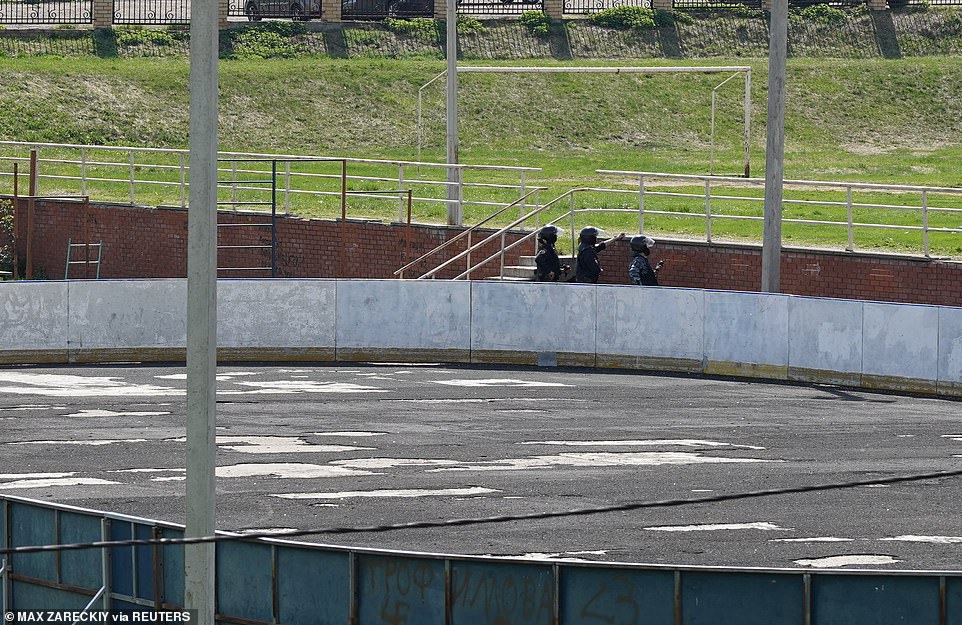 A tactical response team is seen in the grounds of the school surveying the building. It was not clear if there was a shooter or shooters still at large 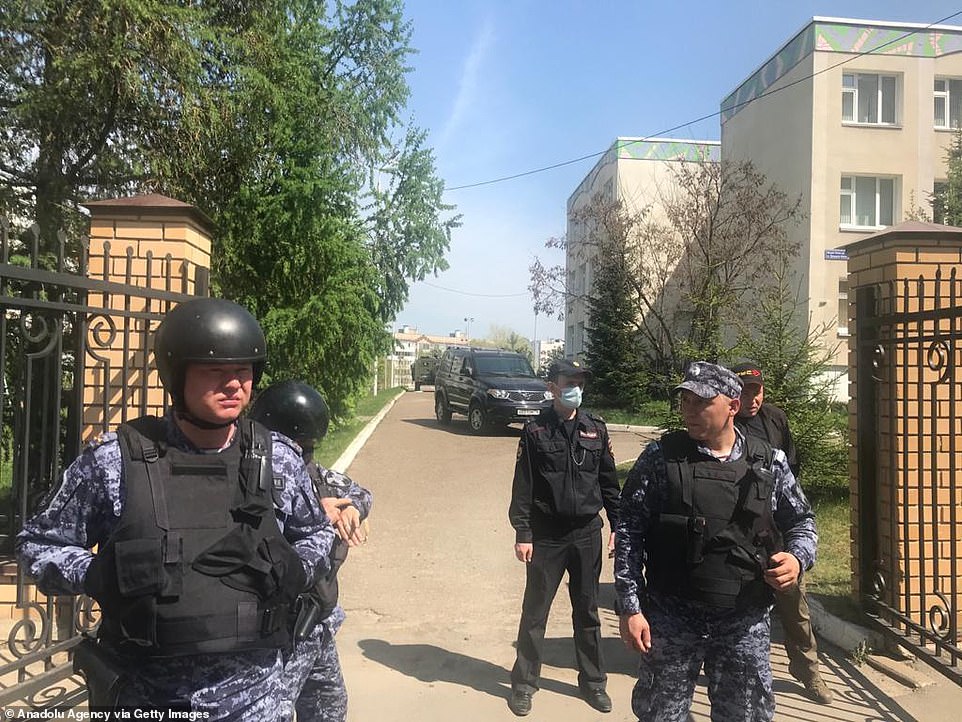 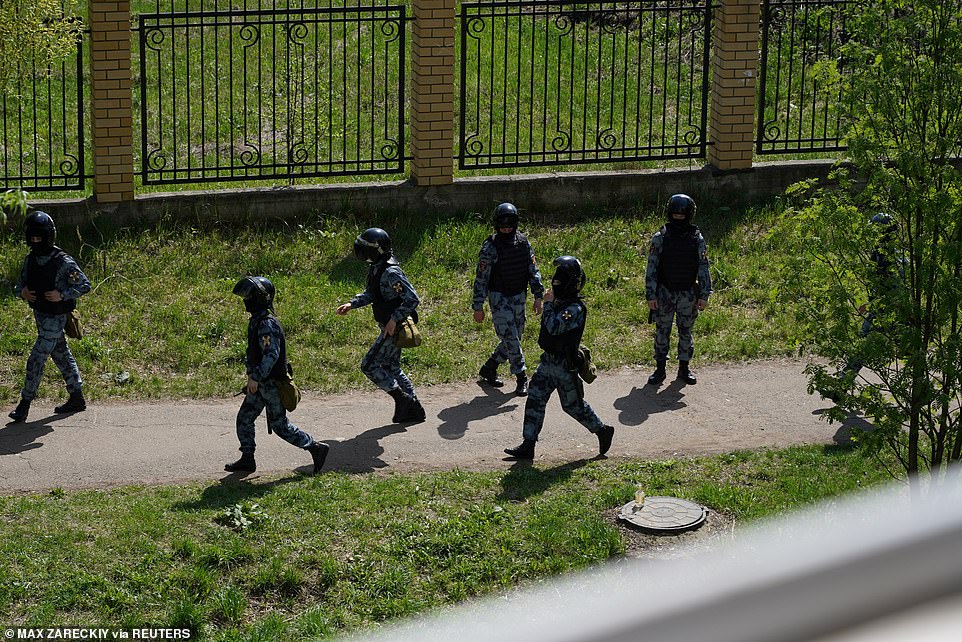 Troops are seen around the perimeter of the school building today 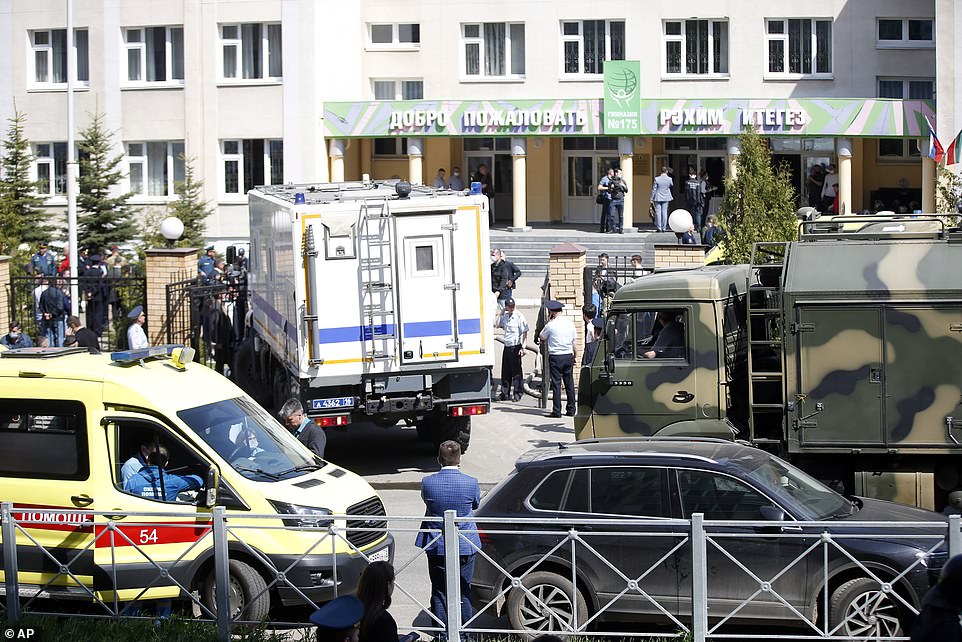 Ambulances, army and police trucks are seen outside the front of the school this morning 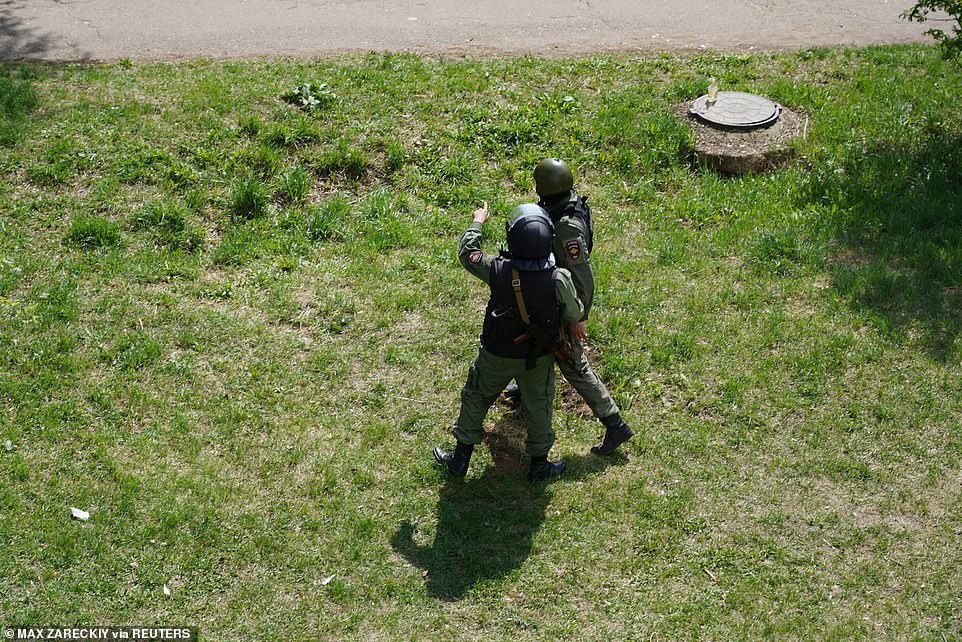 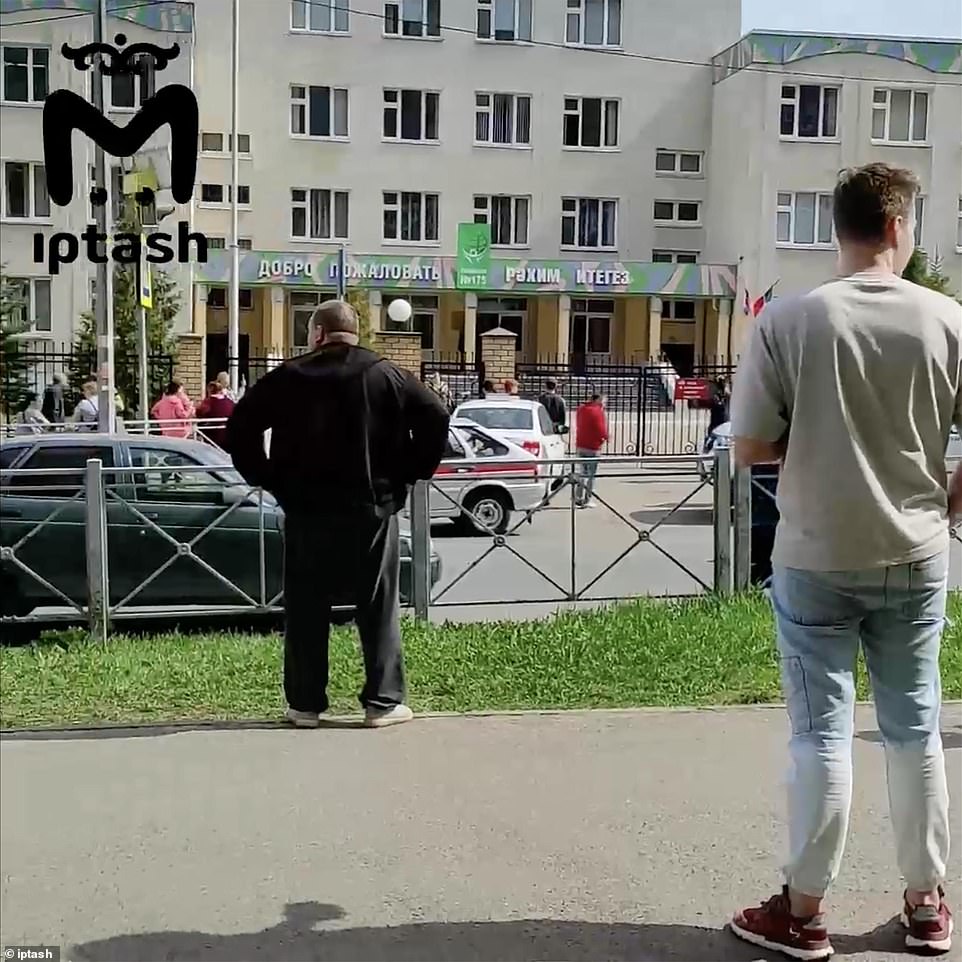 Local residents gathered outside the school gates after the shooting started 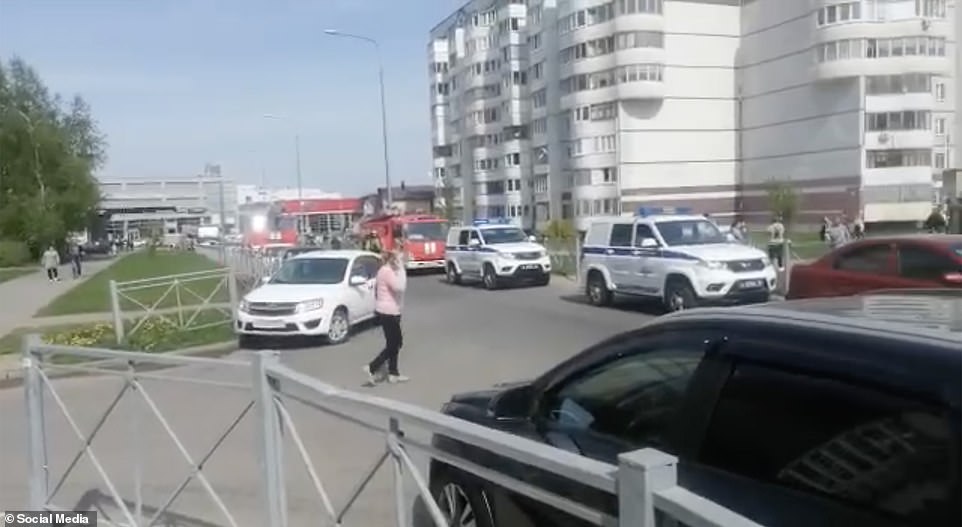 Fire engines and police cars arriving at the scene this morning 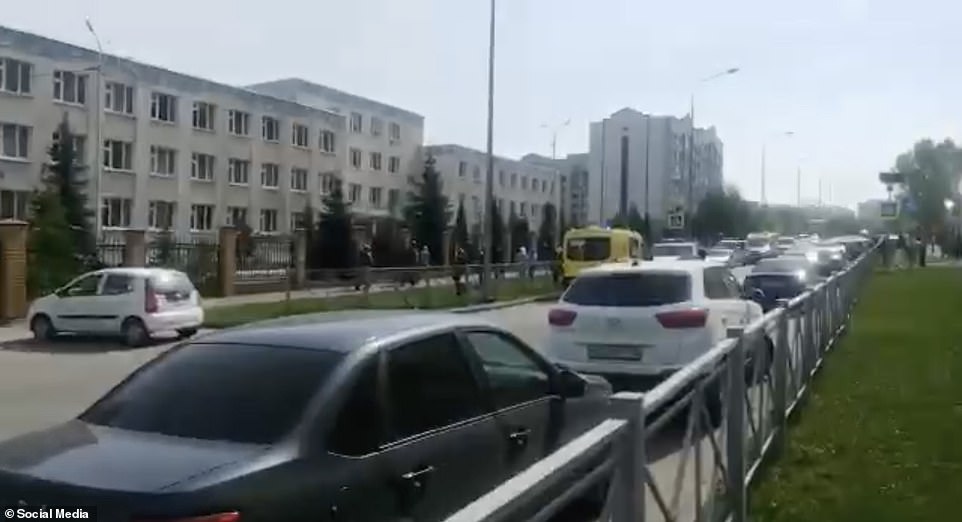 Emergency vehicles at the scene this morning 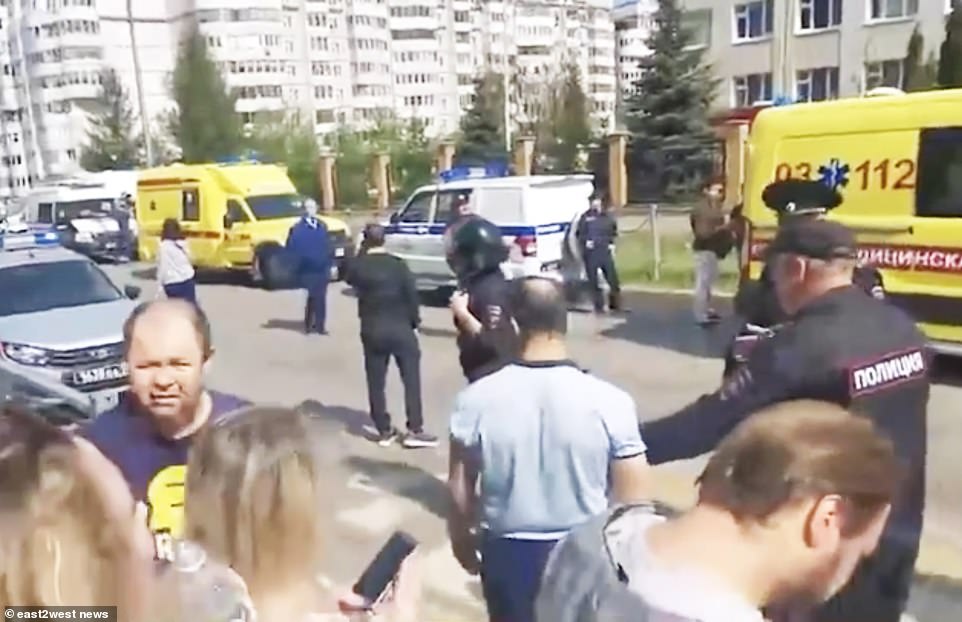 A crowd, including concerned parents, is gathered outside the school as dozens of emergency vehicles arrived at the scene

Around 20 ambulances were on the scene, including members of the security forces.

There were varying reports on the number of casualties, with one local paper saying that up to 32 children had been rushed to hospital.

‘The prosecutor of the Republic of Tatarstan Ildus Nafikov left for the scene. The circumstances of the incident are being investigated,’ said an official.

All the other schools in the city were closed for the day as a precaution.

School shootings are rare in Russia. One of the last major shootings of its kind took place in Russian-annexed Crimea in 2018 when a student at a college killed 19 before turning his gun on himself.

Kazan is the capital of the Muslim-majority region of Tatarstan and located around 450 miles east of Moscow.

DOGE investing is a fad for many, says behavioural finance expert

A Kraft Heinz Firm and Van Leeuwen Ice Cream partnership resulted within the limited-edition mac and...