Seven NHS trusts in England are already treating more coronavirus patients than they were at the peak of the first wave, statistics show as the country braces for five months of misery through winter.

But the silver lining is that, overall, total beds occupied by Covid-19 sufferers across the country are a third of what they were during the darkest days of the crisis in April.

Doncaster and Bassetlaw Teaching Hospitals NHS Foundation Trust in Yorkshire has seen the most dramatic rise in Covid-19 hospitalisations compared to its first peak. Just 67 beds were occupied by infected patients on April 12 – England’s busiest day in the pandemic. This had more than doubled to 141 by October 20.

At Blackpool Teaching Hospitals NHS Foundation Trust, 173 of its beds were taken up by people with the virus on October 20. It marked a 50 per cent jump compared to levels on April 12, when doctors there were treating 117 Covid-19 patients.

Liverpool University Hospitals NHS Foundation Trust is treating 396 coronavirus sufferers, according to the most recent snapshot from NHS England. This is up almost 15 per cent on the 346 patients being treated for the disease on April 12.

But outbreaks of infections in some of the worst-hit areas of the country – including Liverpool – are already starting to slow down, suggesting the influx of hospital additions will tail off in the coming weeks. It normally takes more than a fortnight to become seriously ill with Covid-19 and need hospital treatment.

SCROLL DOWN TO SEE HOW BUSY YOUR HOSPITAL IS 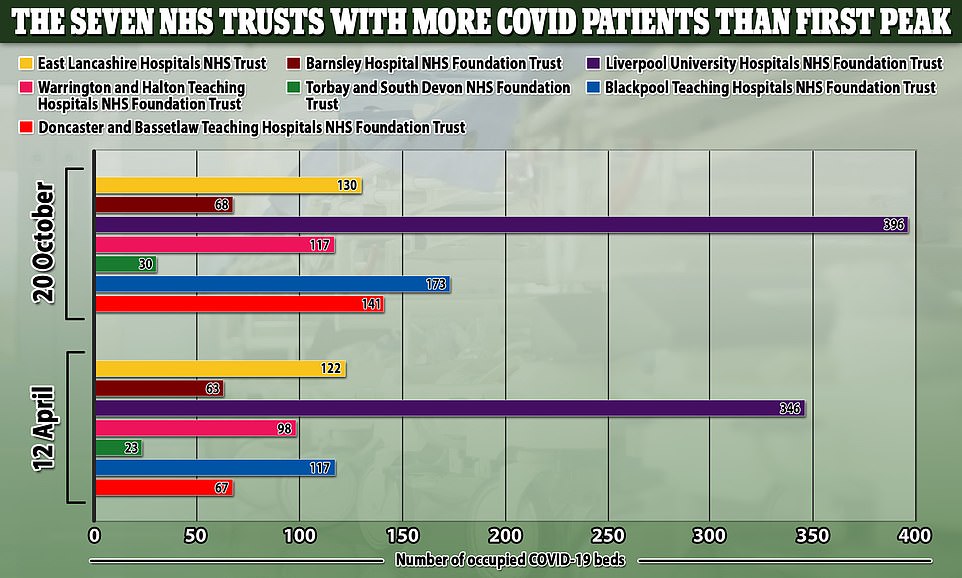 Seven NHS trusts in England are already treating more coronavirus patients than they were at the peak of the first wave, MailOnline analysis of NHS England figures shows

WHERE ARE THE SEVEN TRUSTS? AND HOW DO LEVELS COMPARE TO APRIL?

The caveat with these figures is that they only go up to October 20, meaning there is no way to tell how many patients have been discharged since Wednesday.

And Covid-19 hospital admissions lag by around two to three weeks because of a delay in the time it takes for someone to fall ill enough with the virus to need care – so there is a chance they have continued to rise.

As a result of a late-September surge in infections – which saw at least 28,000 people catching the disease every day – hundreds or thousands of admissions and deaths are ‘baked in’.

The fact several trusts are seeing more Covid-19 patients than in spring already will be a cause for concern so early into winter. As the country moves deeper into the colder months, people tend to get sicker and need care, which puts additional pressure on hospitals.

But there is reason to be optimistic, as the same NHS figures show the number of beds occupied by Covid-19 patients are a third of what they were six months ago. As of October 20, there were just 6,055 people with the disease in the country’s hospital, compared to 18,970 on April 12.

Even at the peak of the first wave, only 27 per cent of England’s hospital beds were occupied by coronavirus patients, on average. It is not possible to compare how many beds are occupied now because health officials have secured additional capacity through deals with the private sector and also in its Nightingale hospitals.

However, the most recently published figures- which only go up up to the end of September – suggested it stood at 2 per cent. At that point, 478 out of 110,000 beds in use were by Covid-19 patients.

As wards start to fill up with virus patients once again, it was announced yesterday the NHS Nightingale Hospital in Manchester will become the first of the seven Nightingales – built during the pandemic in spring – to reopen.

The unit in Manchester will not be used to treat people seriously ill with coronavirus but instead opened to take non-virus patients who may need to be discharged to make room for people with Covid-19.

The other six Nightingales are on standby in case the crisis threatens to overwhelm hospitals in other areas. Health bosses are conscious not to disrupt normal healthcare this time around.

Tens of thousands of operations were cancelled in spring to make way for a swarm of virus patients and almost all NHS services were functioning at a fraction of their normal capacity.

NHS Digital estimates there were 26.7million fewer GP appointments in England between March and August this year than in the same period in 2019 – down from 146.2million to 119.5million.

Cancer Research UK said more than 350,000 people who would normally have been urgently referred to a specialist to have vital tests to check if they have the disease have not been. The charity believes the delays could cause an additional 35,000 avoidable deaths at the hands of cancer.

Inspectors also fear that ‘lost’ appointments with doctors have led to a significant deterioration in patients’ health  and the worsening of other conditions such as asthma and diabetes.

Covid-19 infection rates in the North West, North East and East Midlands FALL for the first time since August

The rates of coronavirus infections in the North West, North East and East Midlands have fallen for the first time since the start of England’s second wave.

Northern regions of the country have fuelled the autumn’s resurgence of Covid-19 but there are now signs cases are starting to plateau.

Public Health England data shows that the rate of infection dropped from 367.5 positive tests per 100,000 people to 356.6 in the North West between October 11 and October 18.

The region, which includes Liverpool and Manchester, has been worse hit than anywhere else in the country since cases started to spiral again, and around seven million of its residents are now living under Tier Two or Tier Three local lockdown rules.

Infection rates also fell in other badly-affected regions, the PHE data showed, with the cases-per-100,000 dropping in the North East and the East Midlands. It also declined in the South West and South East, but those are not as badly hit as other regions.

Cases continued to rise, however, in the East of England, London, the West Midlands and Yorkshire & the Humber. Although only the West Midlands saw an increase of more than 10 per cent, showing the speed of cases climbing is relatively slow.

The data echoes comments made by Sir Patrick Vallance, the UK’s chief scientific adviser, in a Downing Street briefing this afternoon.

‘As long as R is above one the epidemic continues to grow and it will continue to grow at a reasonable rate – it’s doubling, perhaps, every 14 to 18 days – unless the R comes below one,’ he said.

‘But I do want to say, there are some areas where we’re beginning to see real effects of what’s happening. There are some indications [that] amongst young people the rates are coming down or flattening off a bit due to the huge efforts that people have made to try to adhere to these changes in behaviours that we need to have in order to get this down.

‘And in some areas of the country we can begin to see a little bit of flattening, possibly. So the measures are having an effect but we’re going to need to do more if the aim is to get R below one and to shrink this epidemic.’

It comes as separate data showed the number of people dying of coronavirus in England and Wales rose for the first time in five months in September. But it is still only the 19th most common cause of death.

Office for National Statistics data published today show 725 people died with Covid-19 – although not necessarily because of it. In comparison, just 576 fatalities were recorded in August. This was the first time the number had increased since the first wave of disease slammed into the UK in April, when deaths in England and Wales soared from 1,700 to 31,000 in a month.

Since then, deaths had been more than halving every month but have now started to rise again. But the report reiterated that the number of victims is still ‘significantly below levels’ seen during the spring, when more than 1,000 Covid-19 fatalities were being recorded each day.

Despite coronavirus fatalities increasing, it still no longer ranks as one of the top causes of death. It was the 19th most common in England and 24th in Wales. Dementia was the top cause of death in both England and Wales, accounting for more than one in 10 fatalities, followed by heart disease and lung cancer.

The ONS report comes as official data from the Department of Health also shows deaths are rising again across the UK. The daily average has now risen to 151 after falling to a low of just seven in the summer. Top medical advisers have warned that deaths will continue to rise even if cases start falling because they have been ‘baked in’ among people who have already been infected.

Data in the report also showed that 2,500 more people than usual died in September but, with fewer than 750 blamed on coronavirus, this meant that at least 1,700 were ‘excess’ deaths which are those thought to have been caused by the pandemic but not directly by Covid-19.

Coronavirus accounted for fewer than one in 50 of these, composing 1.7 per cent of deaths in England and 1.3 per cent in Wales.

The 725 people who died with coronavirus in England and Wales in September were ones whose deaths ‘involved’ the disease, while a lower 596 people died ‘due to Covid-19’.

Those who had it when they died but it wasn’t deemed to be the main cause of death likely had another illness that coronavirus exacerbated – such as heart disease or cancer – or it may have been coincidental that they tested positive.

The ONS report said: ‘In September 2020, the number of deaths and mortality rate due to Covid-19 remained significantly below levels seen in March 2020 (the first month a Covid-19 death was registered in England and Wales).

‘However, the mortality rate due to Covid-19 was higher in England in September 2020 compared with the previous month (August 2020).

It was also significantly lower than the death rate for other illnesses.

The leading cause of death in England in September was dementia, which had a death rate of 97.9 per 100,000 – six times higher than that of Covid-19.

Heart disease was the second most deadly illness during the most recent month, with a rate of 91.1 per 100,000.

The ONS said it would not publicise a full list that stretches down to the 19th and 24th places that Covid-19 now occupies.

Although coronavirus deaths are far lower than they were during the first wave, they will continue to rise in the weeks and months to come, Government advisers have warned.

Because so many people have been catching the virus in September and October – at least 28,000 people per day, by the ONS’s own estimates – hundreds or thousands of deaths will now follow as a consequence.