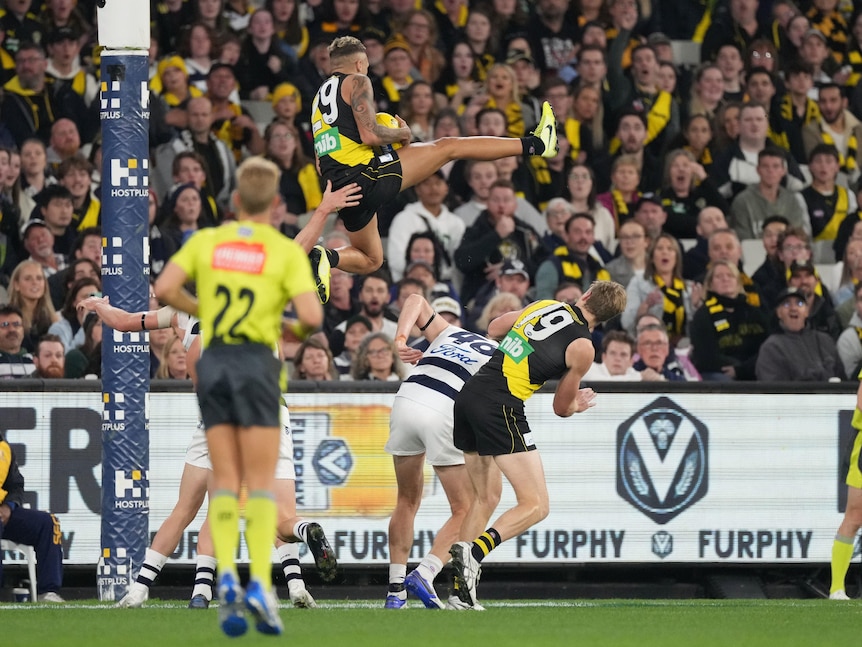 Impossible to define, but you know it when you see it.

US Supreme Court Justice Potter Stewart’s famous 1964 threshold test for obscenity doubles as an accurate description of the perfect mark in Australian rules football, still the most uniquely thrilling and ineffable part of the game.

Our latest reminder of just how special a proper screamer can be came from Richmond’s Shai Bolton, who against Geelong on Friday night soared as high as anyone has for many a year — before swiftly reminding us days later that what goes up, must always come down.

Bolton’s mark just had that feeling about it, and was immediately and fairly compared to the modern greats of the specky game. We’re talking about the best of the best here — Shaun Smith, Gary Moorcroft, Gary Ablett, Tony Modra, Chris Tarrant, Brendon Goddard.

But what if there were a way to quantify that feeling?

A series of factors have to combine to make one spectacular mark better than another, and it can’t just be the size of the leap or the length of the hangtime.

So much of it is context and atmosphere, and all the planets aligning at just the right time to make the moment transcendent. Here’s how it is done.

If a hanger is taken at 1:00pm on a Sunday and nobody is there to hear it, does it make a sound?

Unfair as it may be, for a mark to be elevated to the upper echelon it really needs to come in prime time. We’re talking Friday or Saturday night, or some other blockbuster occasion, where national attention is drawn and every minute detail of the match is elevated in importance.

Bolton had the advantage of pulling out his effort on a Friday night at the MCG, in a grand final rematch that had been anticipated for months, while Smith and Moorcroft both produced their magnum opuses on a Friday night too.

Tarrant’s best mark came in the Queen’s Birthday showpiece game against Melbourne in 2001, while Goddard saved his for the climax of a drawn grand final.

Of course, it is possible to produce a hall of fame mark off-Broadway — Ablett and Ashley Sampi both proved that — but there are clear advantages to performing on the bigger stages.

We’re not talking about venue, now. This about the location the mark takes place on the ground.

On the face of it, it might not seem like this matters — surely a great mark is a great mark anywhere — but for maximum impact, it is absolutely crucial.

Simply put, the closer to goal the better. Imagine ever-expanding arcs leading away from the goalsquare, each one decreasing in value, and you get the idea.

A screamer taken deep in the forward line allows for the all-important pause after the mark, the moment when the forward gets to his feet and sucks in some oxygen while the crowd goes off its collective head. It lets the player’s teammates react and celebrate with the same wide-eyed wonder as the crowd, and gives the marker the chance for a sneaky look up at a replay.

It also means the resulting goal is a foregone conclusion, ensuring that all focus remains on the mark and analysing it from every angle, without fear of an anti-climactic behind.

This is another tick for Bolton, alongside Smith, Moorcroft, Ablett, Goddard and more recently Liam Ryan.

You can split this section up into two categories — the crowd and the commentary.

The former is basically a foregone conclusion because any crowd is going to get rowdy in the moment for a proper grab. What we’re really looking for here is the secondary gasp, the deep “OHHH” that comes when the replay is first shown on the big screen.

Listen for it next time. You can just about grade a mark based on how many subsequent gasps it gets from the crowd.

The commentary really is make-or-break, though, because it can add or detract so much to the moment and the callers only get one shot at it. Realistically we’re talking about television commentary, too, as that’s the track that will accompany the replay forever and a day.

Unfortunately for Bolton, Seven’s Brian Taylor didn’t quite elevate to the moment as well as he has done in the past — his call for Ryan’s 2019 mark of the year, for instance, was sensational.

Bruce McAveney was the master at it, especially in his 1990s-2000s heyday. Again, Smith and Moorcroft provide the gold standards as McAveney’s guttural roars rise with the leaps and then fade out to let the crowd and his co-commentators do the rest.

When all the other boxes are ticked this is just an added bonus, but if a photographer is able to get just the right snap at just the right time, it really doesn’t hurt.

This is more about longevity, about having something to hang up in a bar that properly captures the artistry and physicality of the mark.

The many shots of Bolton, mid-air with right leg at full extension, are as good as it gets.

By every metric, and surely by anyone’s individual standards, this mark truly belongs in the pantheon.

Where is my third stimulus check? IRS updates 'Get My Payment' tool with information on new COVID payments