Sharing a meal with your loved ones reduces the risk of obesity and can improve your overall wellbeing, according to a new study into eating habits and health.

Researchers from the Open University of Catalonia Foodlab interviewed 12 two parent families with children aged 12 to 16 on their mealtimes and overall health.

They found that family meal routines, such as sharing food, sitting around a table without digital devices or having a pleasant conversation, are beneficial.

This Mediterranean mealtime favours conversation and slower eating, which helps children recognise the feeling of fullness and so prevents obesity, they said. 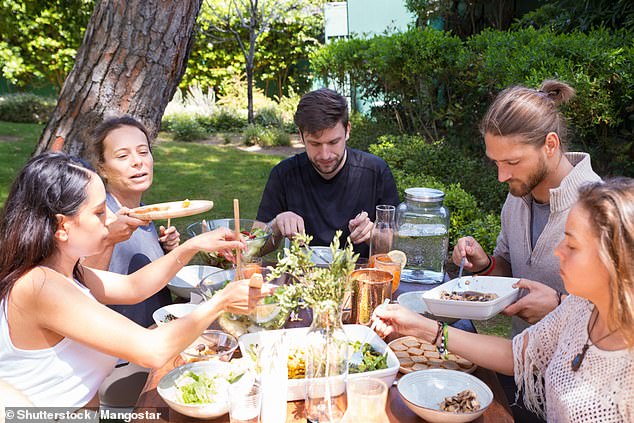 Sharing a meal with your loved ones reduces the risk of obesity and can improve your overall wellbeing, according to a new study into eating habits and health. Stock image

WHAT ARE THE BENEFITS OF A MEDITERRANEAN DIET?

Previous research by the Maastricht University in the Netherlands found that adopting a Mediterranean diet reduces the risk of developing the most deadly form of breast cancer by 40 per cent.

Experts from the University of Barcelona also believe the range of nutrients in the diet makes children less likely to have ADHD.

Cambridge University even found that adopting such a diet would save around 2,000 lives in Britain a year by preventing deaths from heart attacks and stroke.

The key function of the study was to investigate a major feature of the Mediterranean diet – socialisation at mealtime and how it impacts on the health of children.

‘At a time when lockdown due to the pandemic has revived family meals, this study indicates one of the possible positive aspects of the situation that we have had to confront’, explains the study’s researcher Anna Bach-Faig.

The team primarily interviewed the mother in each of the 12 families and then analysed one of the least studied aspects of the Mediterranean diet – socialization.

They wanted to understand how talking at mealtimes, as well as how we eat when in a family group affects our health.

‘A healthy diet is not just what we eat but also how we eat it,’ explained Bach-Faig.

‘The Mediterranean diet is much more than a list of foods.It is a cultural model which includes how these foods are selected, produced, processed and consumed.’

To determine the degree of conviviality in the families studied, the researchers analysed the frequency and duration of family meals, where they took place, the use of digital devices, the preparation of the food and the type of communication.

According to the study, the majority of families only ate the evening meal together and habits varied depending on whether they ate alone or with their loved ones.

Family meals were seen as a place for communication and socialisation, according to the team behind the study.

When families devoted less time to them, did not sit at the table, were distracted by digital devices or did not engage in pleasant conversation during these gatherings, they also followed the Mediterranean diet to a lesser extent.

For the majority of parents, family meals were especially important when they had teenage children, since they favour conversation and closer family bonds.

‘It is easier when children are small, but in adolescence there is a disconnect between you and them and, thanks to these conversations, you can gain a little insight into their world’, explained one of the mothers interviewed.

Moreover, the majority considered that, through these family gatherings, parents become role models and help to establish healthy patterns for their children.

This impression is consistent with the results of other studies in which it is demonstrated that eating together as a family is related to a healthier diet, with more fruit and vegetables, and less sugary drinks. 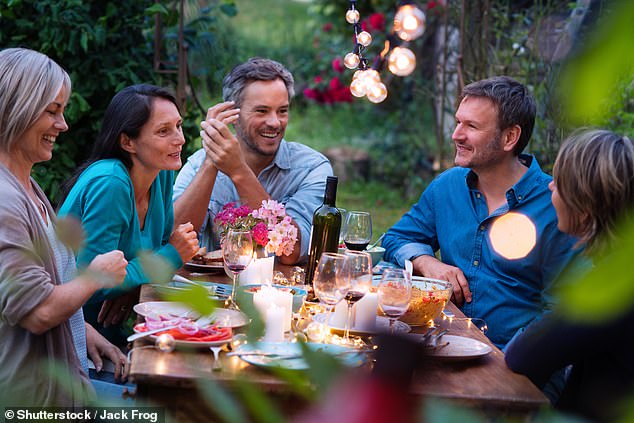 They found that family meal routines, such as sharing food, sitting around a table without digital devices or having a pleasant conversation, are beneficial. Stock image

For nutrition expert Bach-Faig, it is essential to preserve eating traditions in order to maintain the benefits of the Mediterranean diet and promote the health of the younger generations.

However, for several decades now, the Mediterranean diet has been losing influence in the face of the so-called ‘Western diet’, characterised by the predominance of processed foods and eating quickly, often in front of the television.

The study stresses that it is crucial to consider these aspects in order to promote a healthy diet among adolescents and to design public health campaigns.

One example was a campaign carried out in Catalonia with the participation of researchers from this study.

‘Just as we recommend 5 fruit and veg a day’, explains Bach-Fair,’we could also propose at least one family meal a day’.

The findings have been published in the International Journal of Environmental Research and Public Health.

OBESITY: ADULTS WITH A BMI OVER 30 ARE SEEN AS OBESE

Obesity is defined as an adult having a BMI of 30 or over.

A healthy person’s BMI – calculated by dividing weight in kg by height in metres, and the answer by the height again – is between 18.5 and 24.9.

Among children, obesity is defined as being in the 95th percentile.

Percentiles compare youngsters to others their same age.

For example, if a three-month-old is in the 40th percentile for weight, that means that 40 per cent of three-month-olds weigh the same or less than that baby.

The condition costs the NHS around £6.1billion, out of its approximate £124.7 billion budget, every year.

This is due to obesity increasing a person’s risk of a number of life-threatening conditions.

Such conditions include type 2 diabetes, which can cause kidney disease, blindness and even limb amputations.

Research suggests that at least one in six hospital beds in the UK are taken up by a diabetes patient.

Obesity also raises the risk of heart disease, which kills 315,000 people every year in the UK – making it the number one cause of death.

Carrying dangerous amounts of weight has also been linked to 12 different cancers.

This includes breast, which affects one in eight women at some point in their lives.

Among children, research suggests that 70 per cent of obese youngsters have high blood pressure or raised cholesterol, which puts them at risk of heart disease.

And if children are overweight, their obesity in adulthood is often more severe.

As many as one in five children start school in the UK being overweight or obese, which rises to one in three by the time they turn 10.