The amfAR Gala is one of the highlights of the Cannes Film Festival.

And Sharon Stone, 63, defied her years in a feathered lilac gown as she joined Stella Maxwell, 31, and Bella Thorne, 23, in leading the glamour at the 27th amfAR Gala in France, on Friday.

The Basic Instinct actress – who earlier in the day was names named a Commander of the Order of Arts and Letters – was glowing as she posed in her sensational ensemble.

Sharon’s divine dress boasted a fitted bodice and sparkling crossover straps at the front, while the length of its skirt incorporated feathers.

The Hollywood icon accessorised her gown with a pair of statement floral drop-earrings, while paring back her hair and make-up.

Stella oozed sex appeal in an edgy black frock with a long sheer skirt over a luxe patterned material.

The Victoria’s Secret star posed confidently in her unique floor-length dress, which featured a daring split to allow one of her her toned pins to be on display.

Gorgeous: The Hollywood icon accessorised her gown with a pair of statement floral drop-earrings, while paring back her hair and make-up 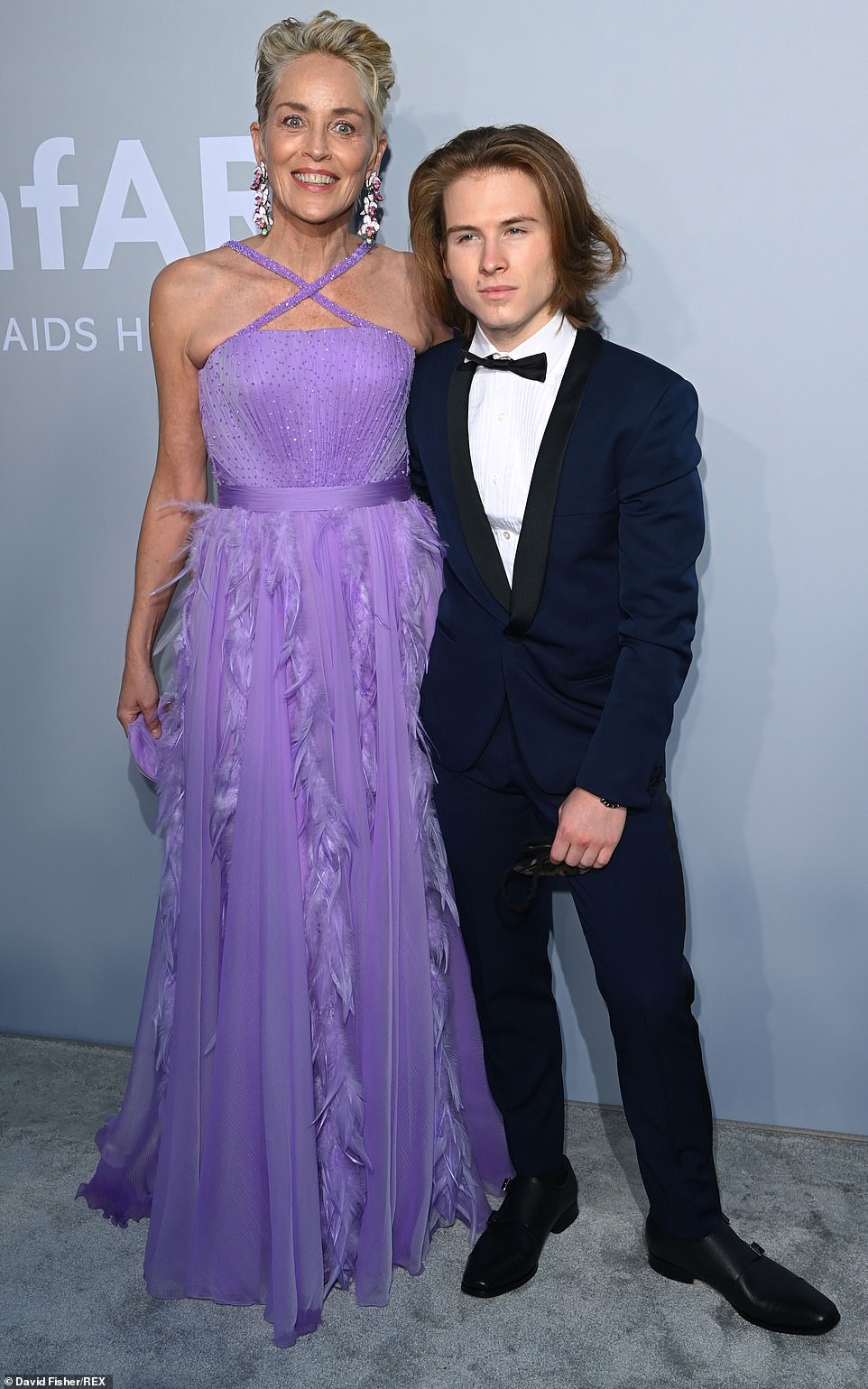 Cute! Sharon proudly posed with her son Roan on the grey carpet at the event 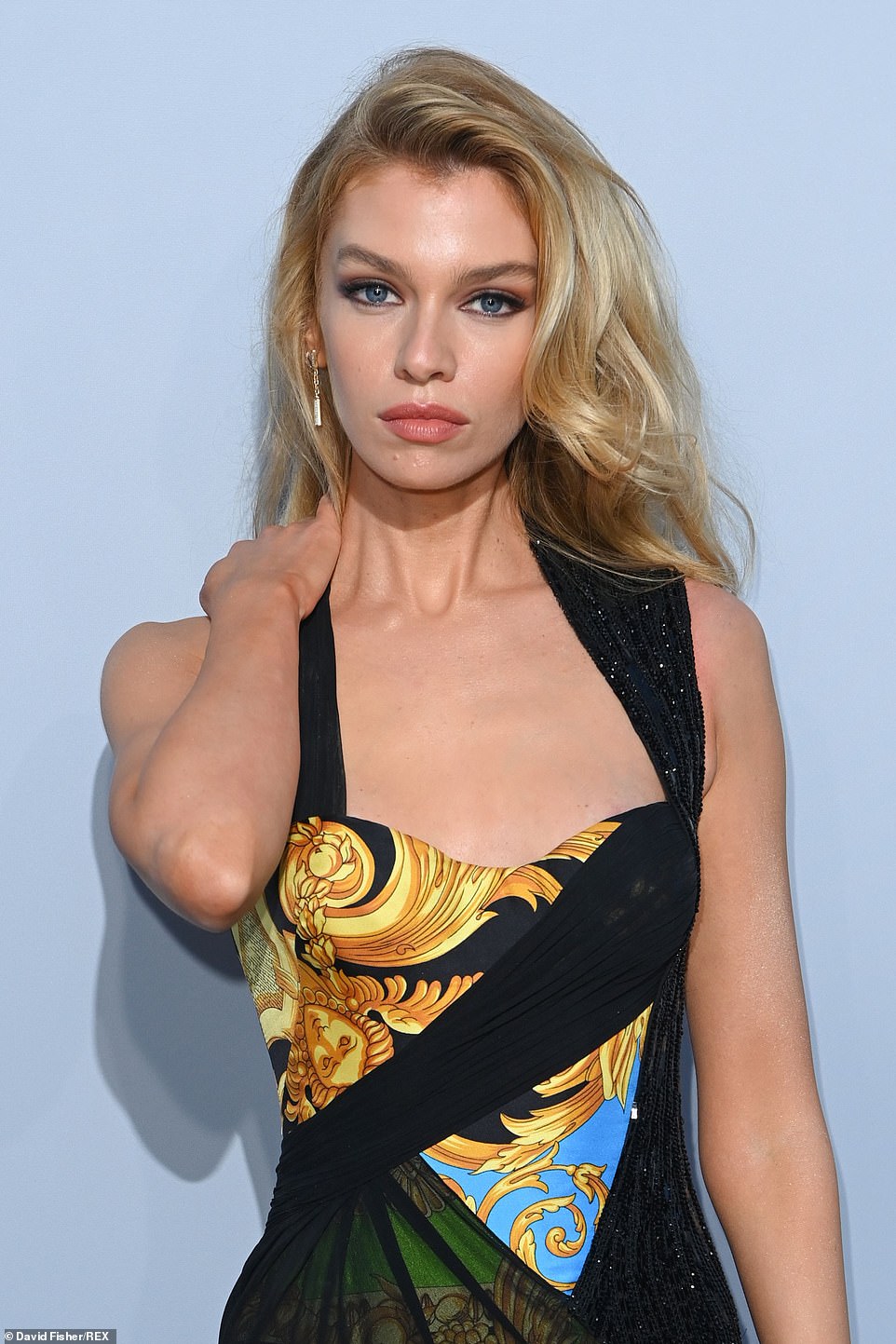 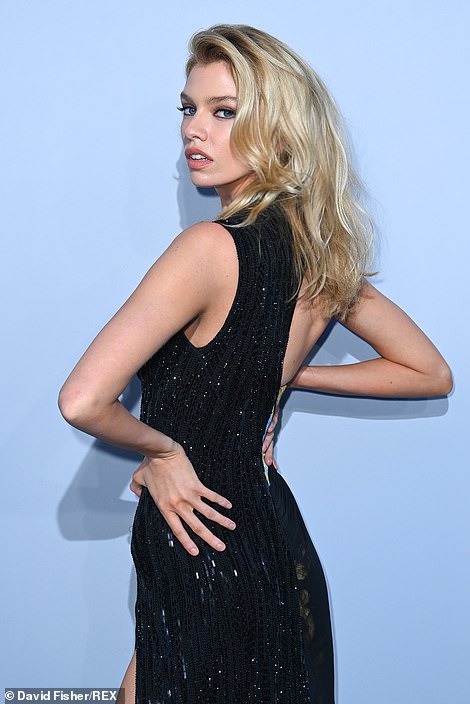 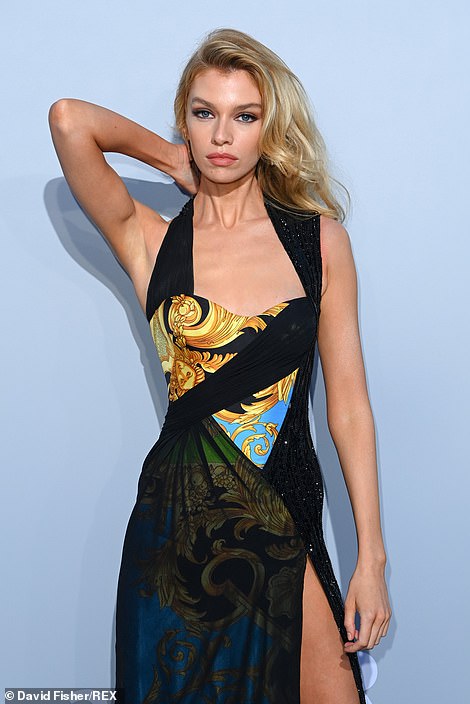 Posing up a storm: The model showed off her posing talents as she showcased her incredible black dress which flaunted her toned figure ahead of the glitzy event 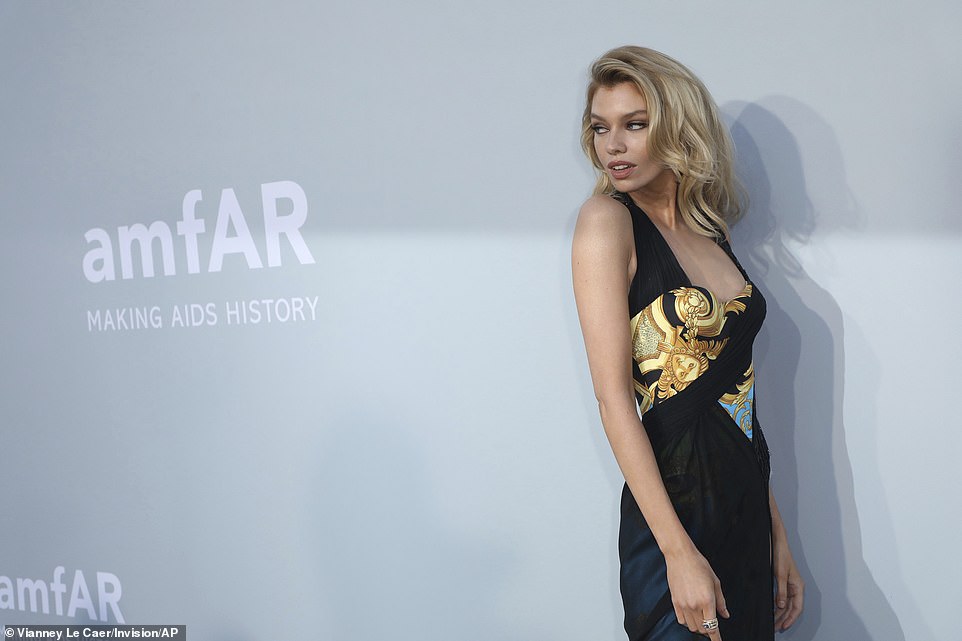 Splash of colour: The blonde beauty’s dress featured a printed section across the bodice with flashes of gold and blue

Stella drew attention to her seemingly endless less by slipping into a pair of stilettos with wraps up to her knee.

Bella Thorne, 23, ensured she stood out in an eye-catching white gown made of shimmering sequin material.

The strapless frock boasted a cut out centre to allow for some of her toned midriff to be on display, while a black strip appeared to hold the chest section together.

The Twilight actress attended the gala with her hunky Italian fiancé Benjamin Mascolo, with the pair putting on a very public display of affection for photographers. 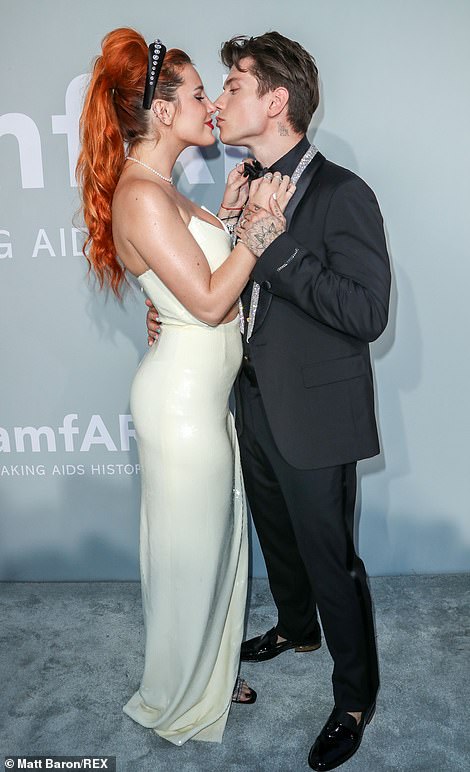 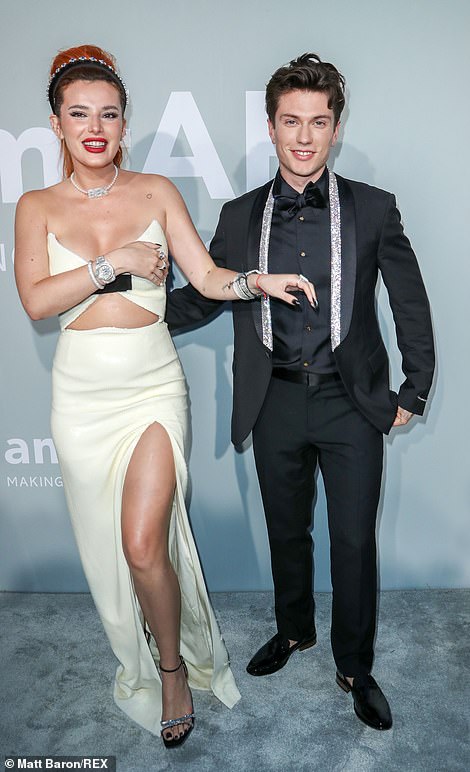 Loved-up: The beauty and her beau could not keep their hands off each other as they larked around at the star-studded event 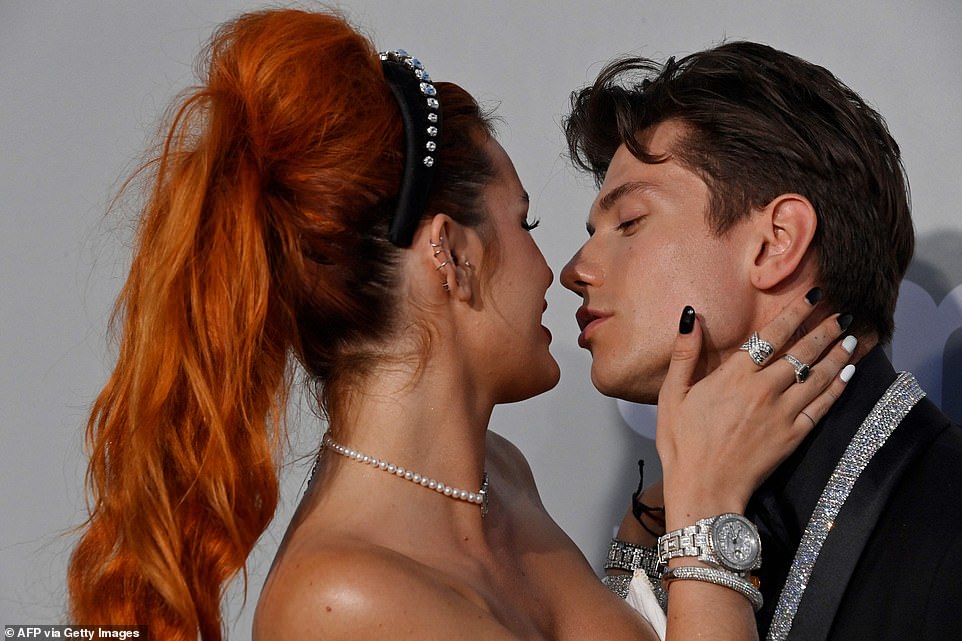 Kiss kiss: Bella and Benjamin kissed each other as photographers snapped away 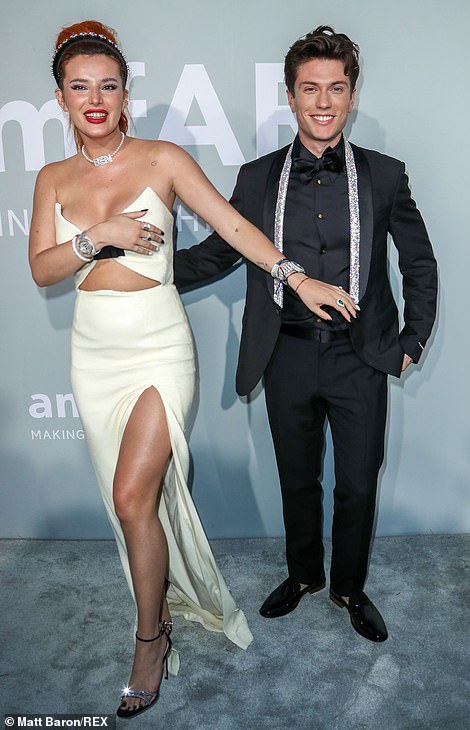 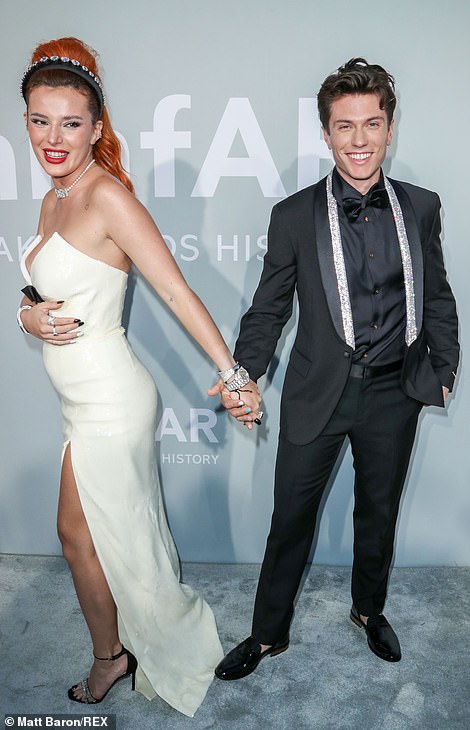 Stunning: She could not contain her smiles while laughing and joking with hunky Benjamin 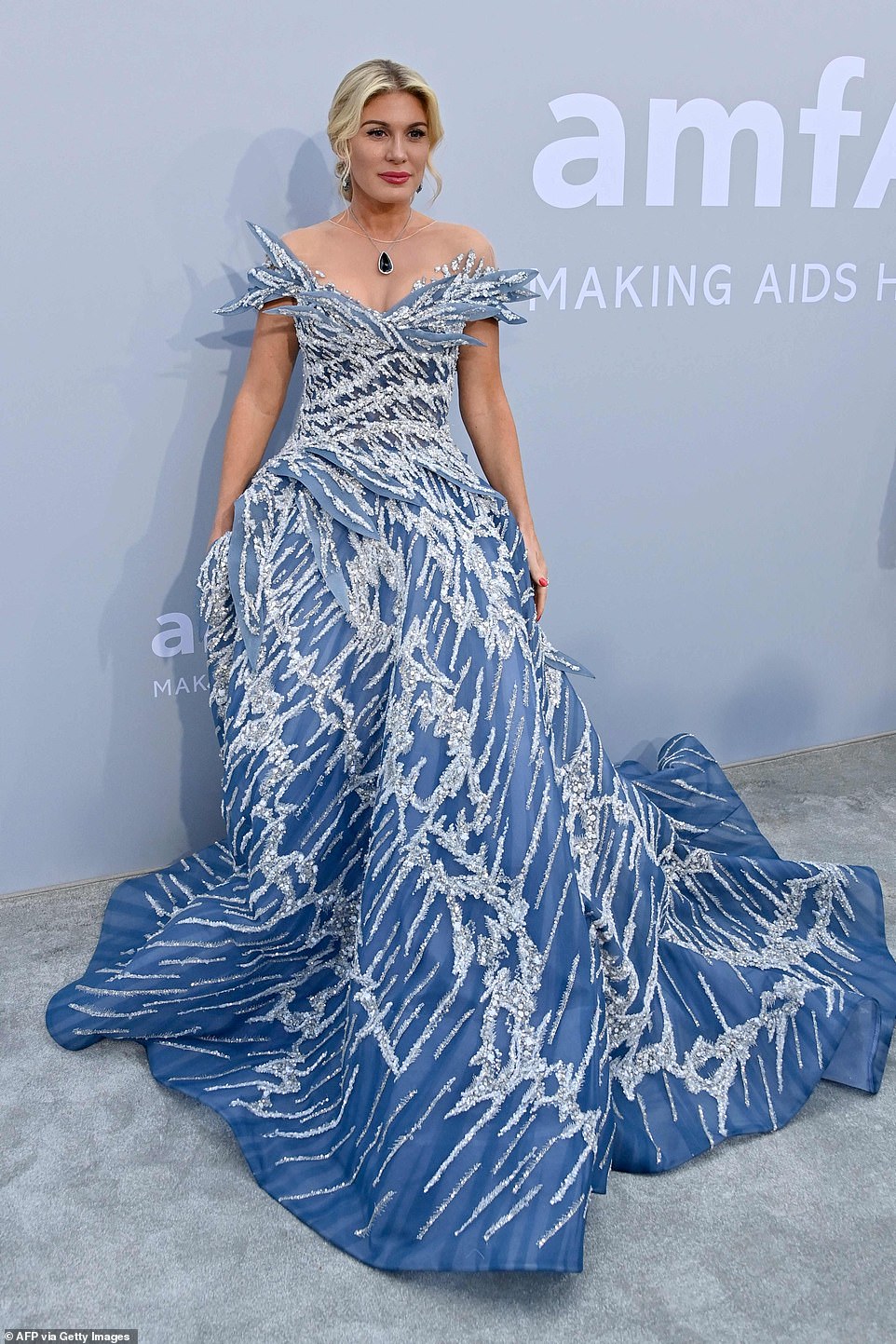 Making an entrance: Hofit Golan, 35, opted for fairytail glamour, in a gown which wouldn’t be out of place in a Disney’s Frozen event 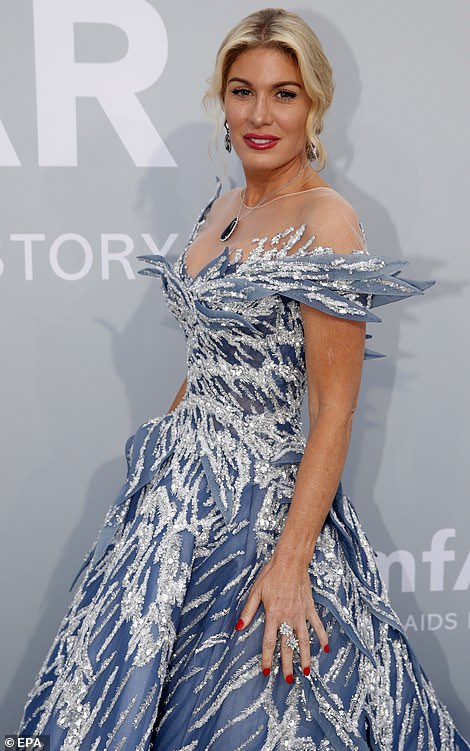 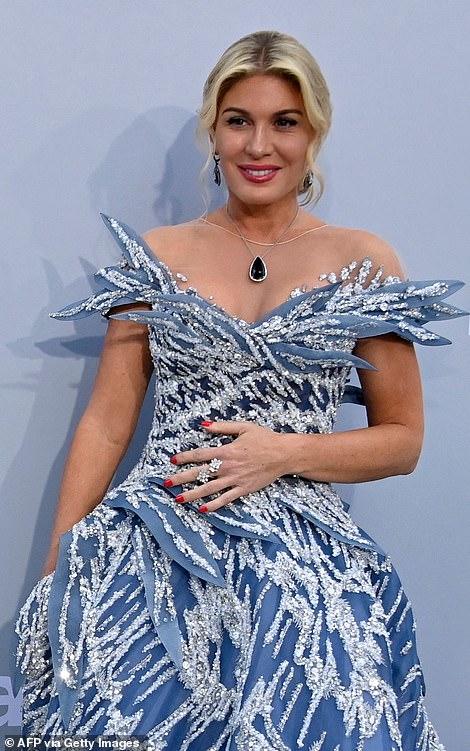 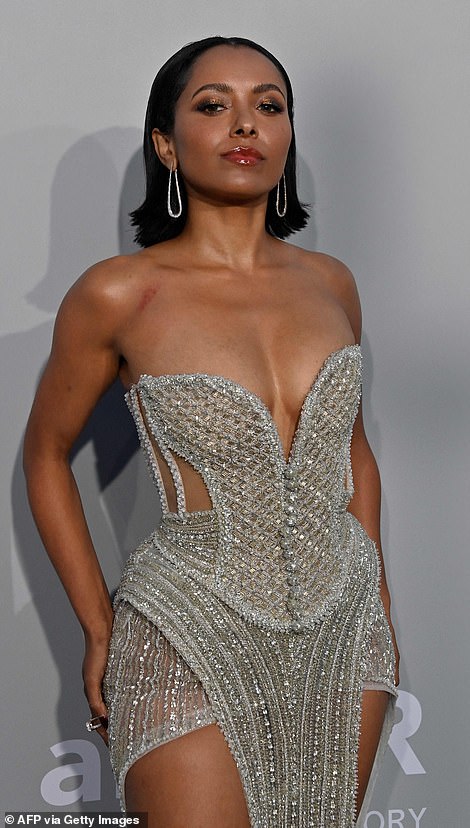 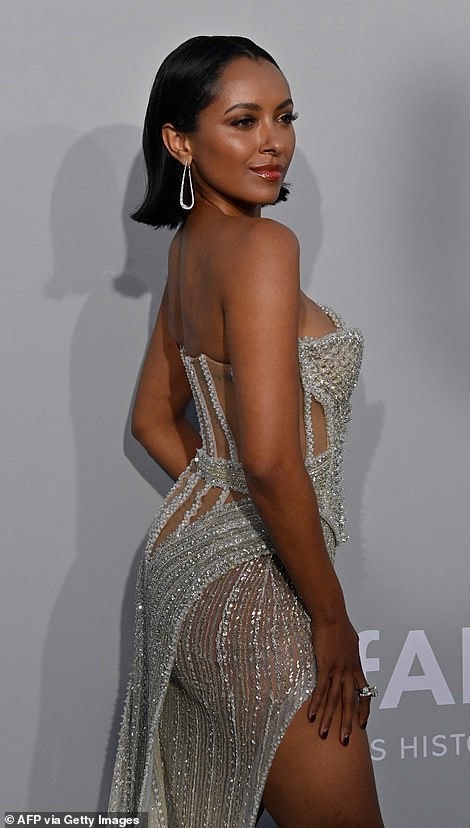 Sizzling: The beauty added even more sparkle to her look with a pair of drop earrings and a large diamond ring 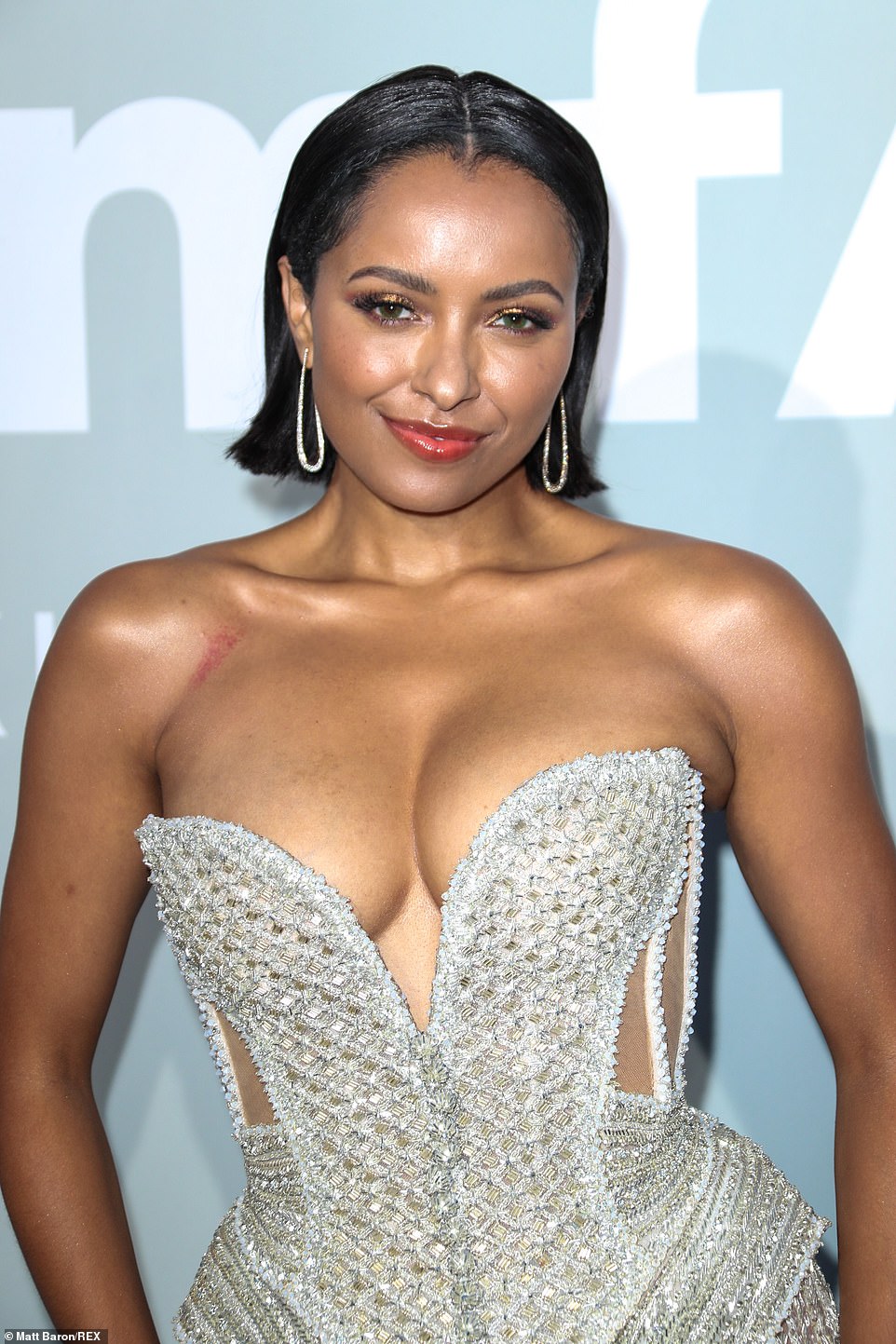 Eye-popping! Kat had her ample assets on show in the deeply plunging silver gown

Hofit Golan, 35, opted for fairytail glamour, in a gown which wouldn’t be out of place in a Disney’s Frozen event.

amfAR, The Foundation for AIDS Research, makes a return to its spectacular live events programme this evening.

The amfAR gala is one of the world’s most successful benefit events and the most coveted ticket in town during the Cannes Film Festival.

Alicia Keys headlines the evening which includes an exclusive dinner, auction, multiple performances and a fashion show curated by Carine Roitfeld, while Sharon will host the event. 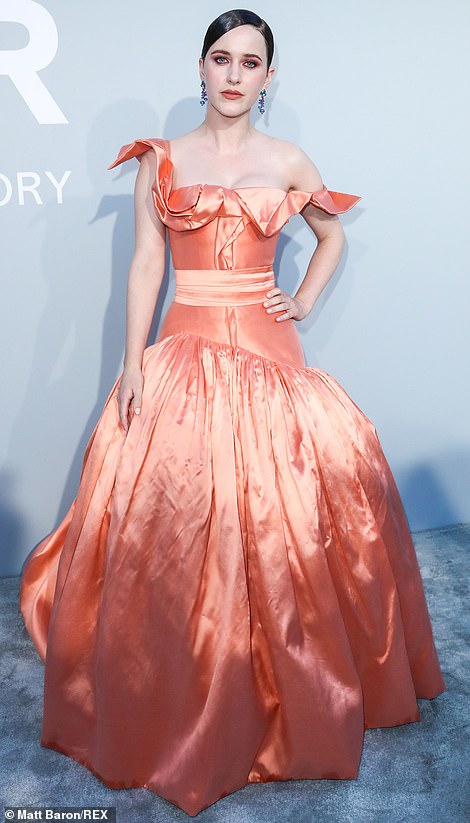 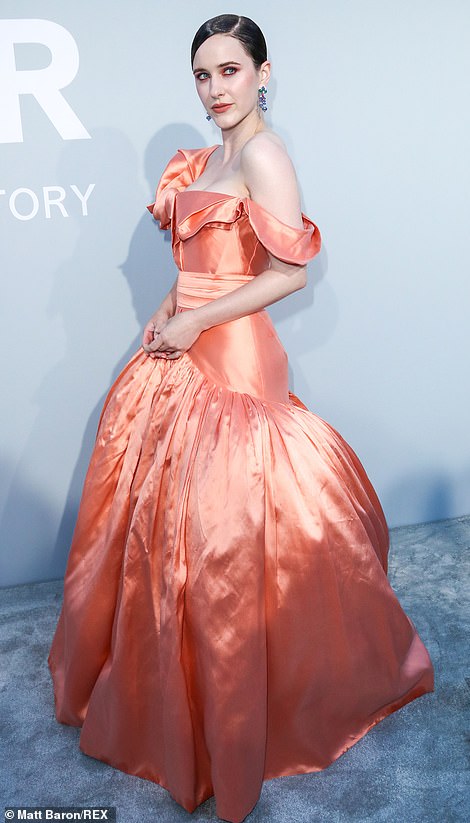 Looking good: Rachel Brosnahan stepped out in a pretty peach ballgown, but added a dramatic twist with slicked back hair and heavy eye-makeup 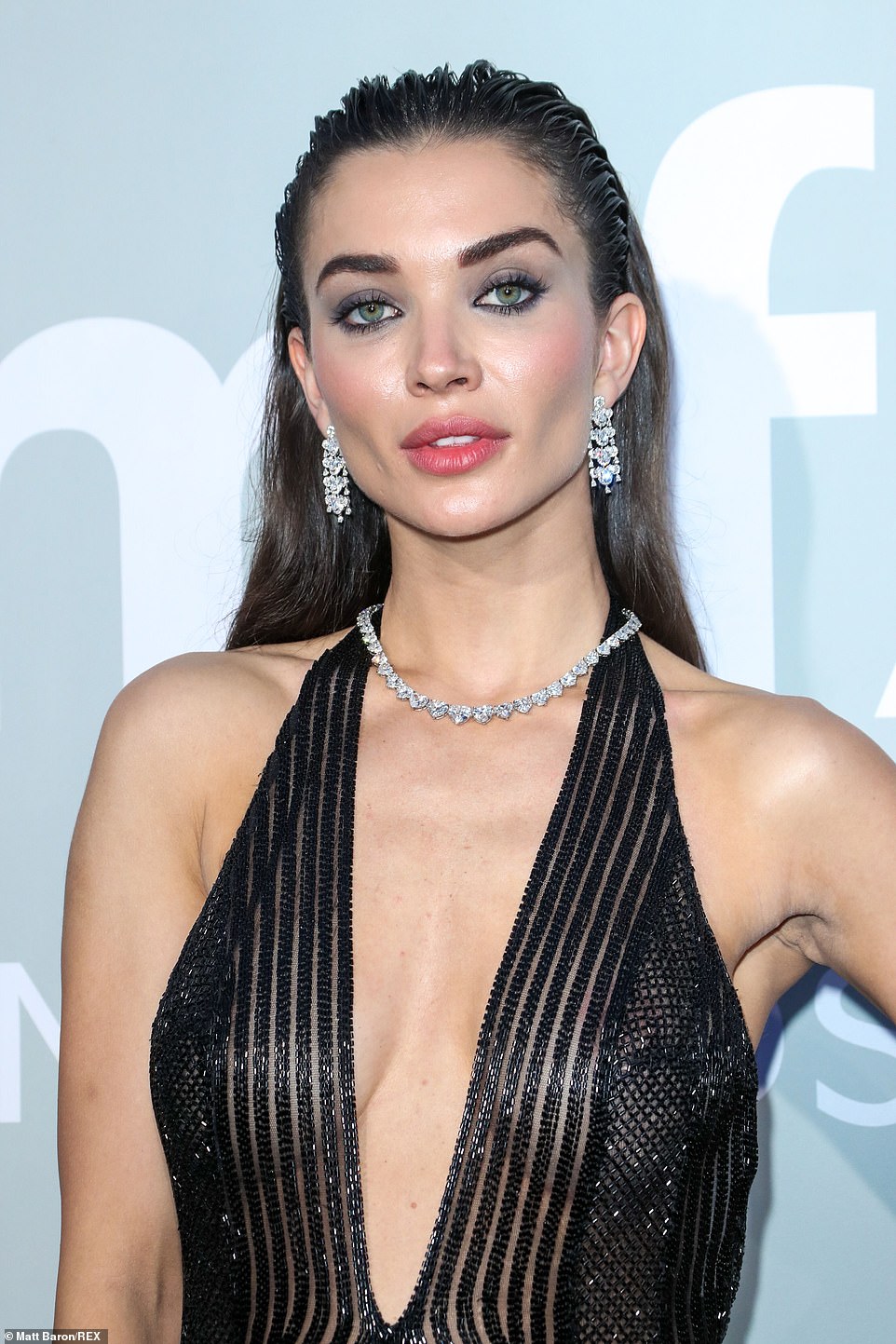 Stunning: The Liverpudlian beauty was preened to perfection with a wet hair look and smokey eye make-up

The actress has been a key figure for amfAR since the 1990s the death of her dear friend and acting coach Roy London.

This year’s event will be held outdoors at Villa Eilenroc on Friday evening and will feature various entertainments, dinner and an auction.

Earlier on Friday, Sharon was named a Commander of the Order of Arts and Letters. 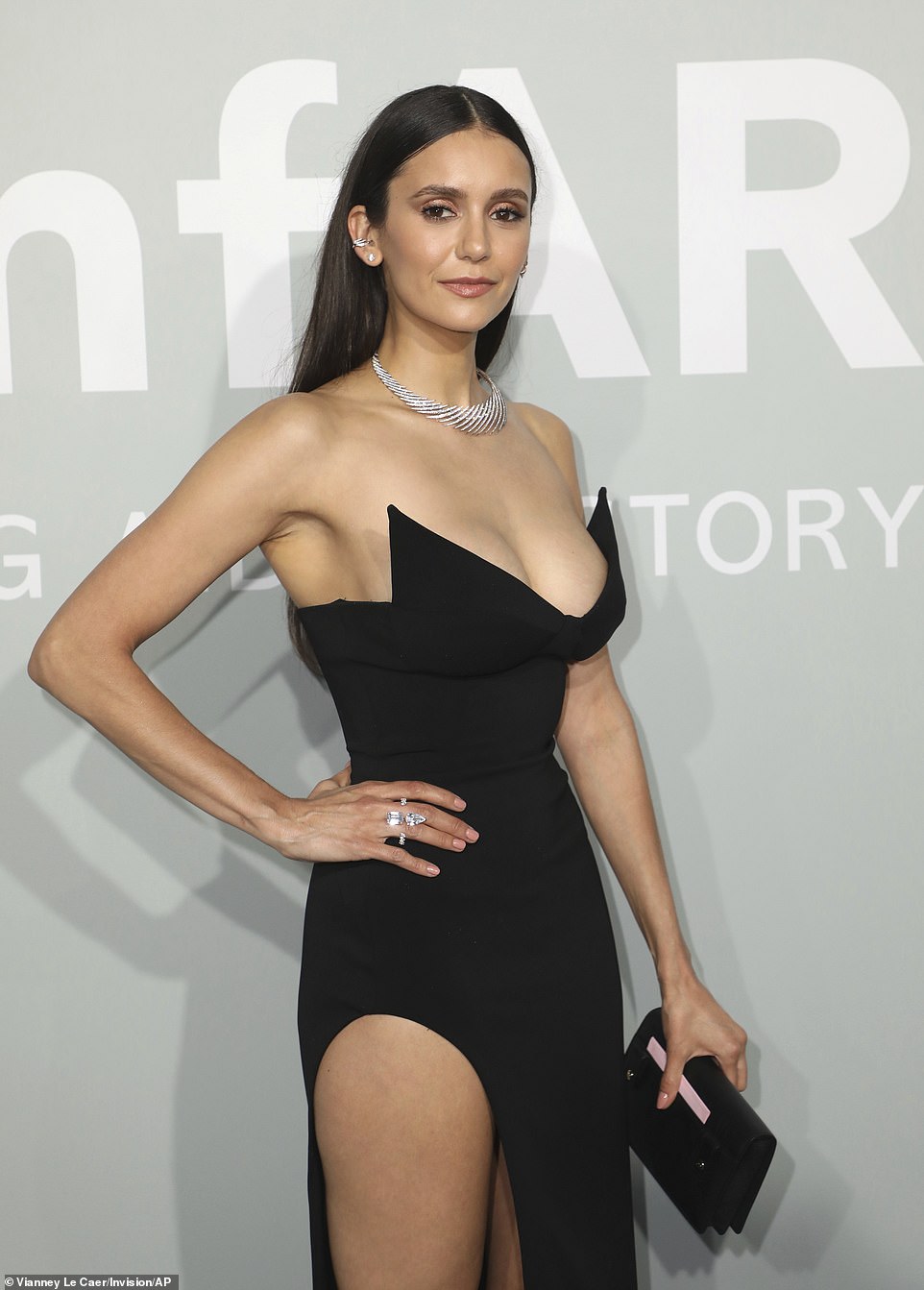 The Basic Instinct actress got emotional as she received the highest French arts honour at the 74th Cannes Film Festival in France, on Friday.

Sharon shed a tear as the green silk ribbon with the gold medal, which represents the Commandeur des Arts et Lettres, was placed around her neck.

Sharon looked incredible chic in a powder pink trouser suit and a sleek navy blue blouse as she was awarded the honour by Cannes Film Festival director Thierry Fremaux.

Actor Bill Murray, 70, was there to congratulate the actress, who wasted no time in planting a loving kiss on his cheek.

The duo became firm friends after they starred alongside each other in 2005 film Broken Flowers. Cannes Film Festival President Pierre Lescure was also there for Sharon’s special moment.

The Ordre des Arts et des Lettres is an order of France established on 2 May 1957 by the Minister of Culture André Malraux.

Its supplementary status to the Ordre national du Mérite was confirmed by President Charles de Gaulle in 1963.

Its purpose is the recognition of significant contributions to the arts, literature, or the propagation of these fields.

Sharon, who was nominated for the Best Actress Oscar for Casino in 1996, joins an illustrious line-up of recipients. 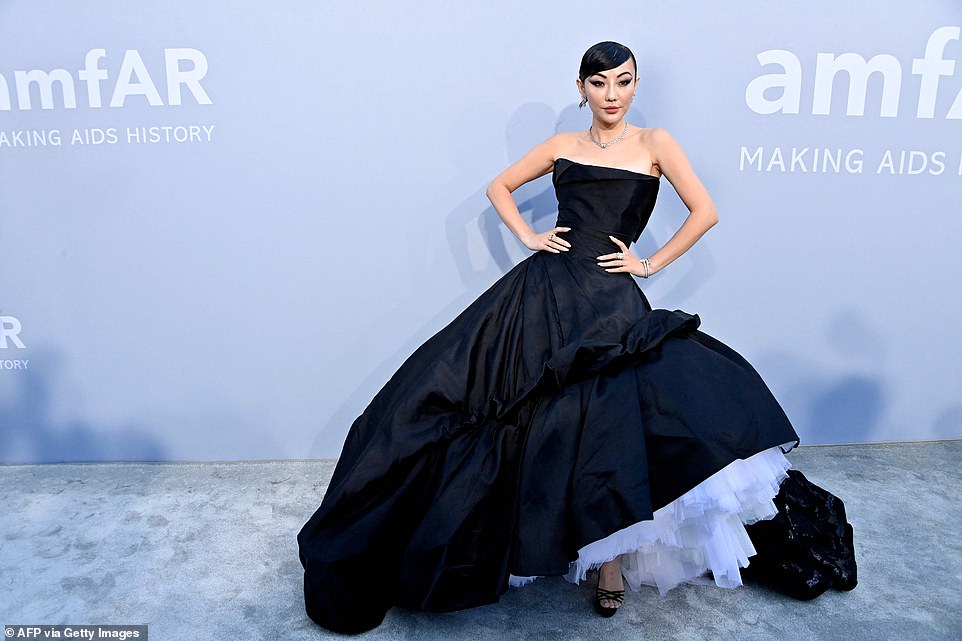 Stealing the show! Jessica Wang commanded attention in a bold ballgown with a huge skirt and structured bodice top

The stunning actress was previously married to screenwriter Michael Greenburg from 1984-1987, and newspaper editor Phil Bronstein from 1998-2004. 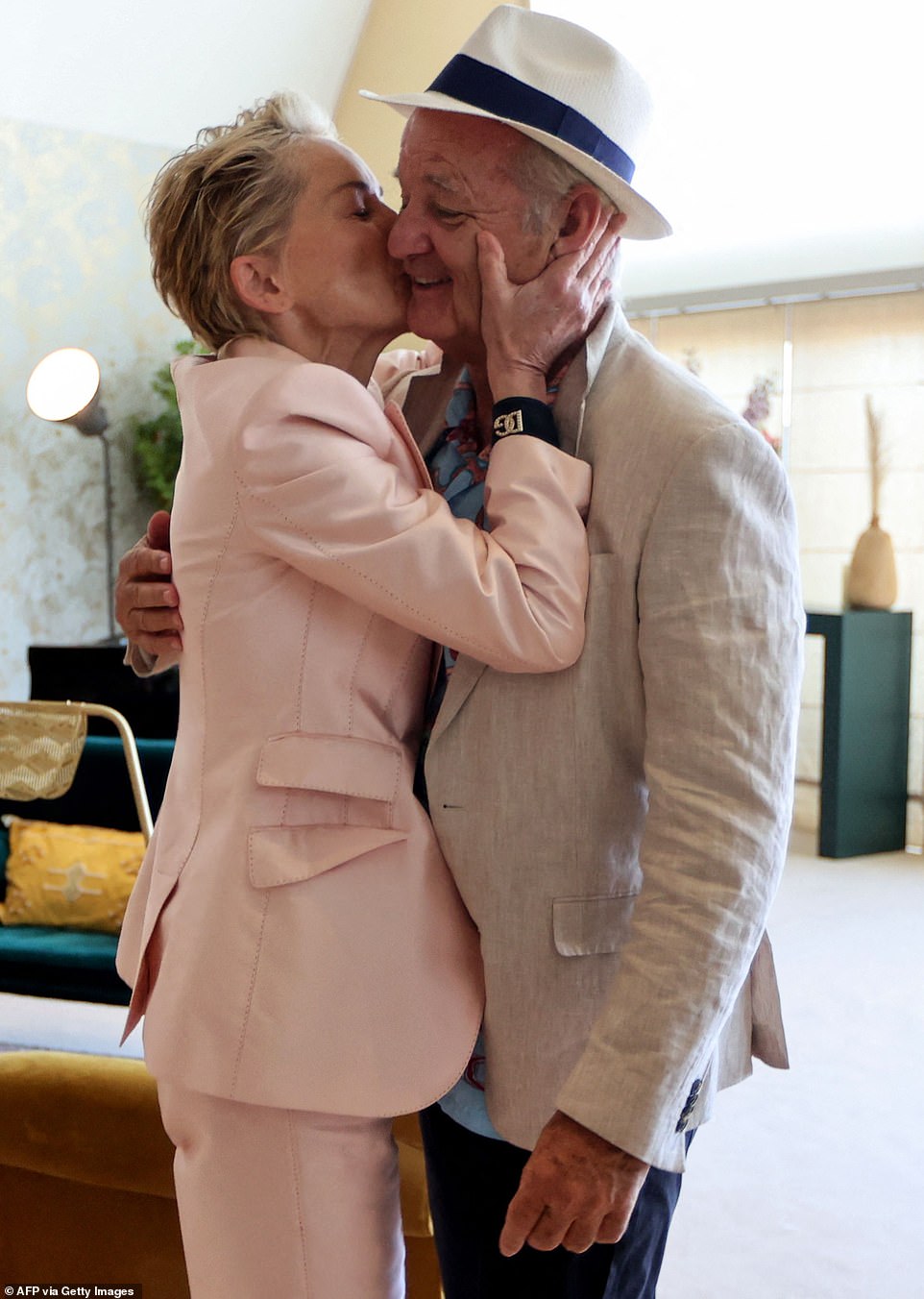 Sweet: Actor Bill Murray, 70, was there to congratulate Sharon after she was named Commander of the Order of Arts and Letters on Friday 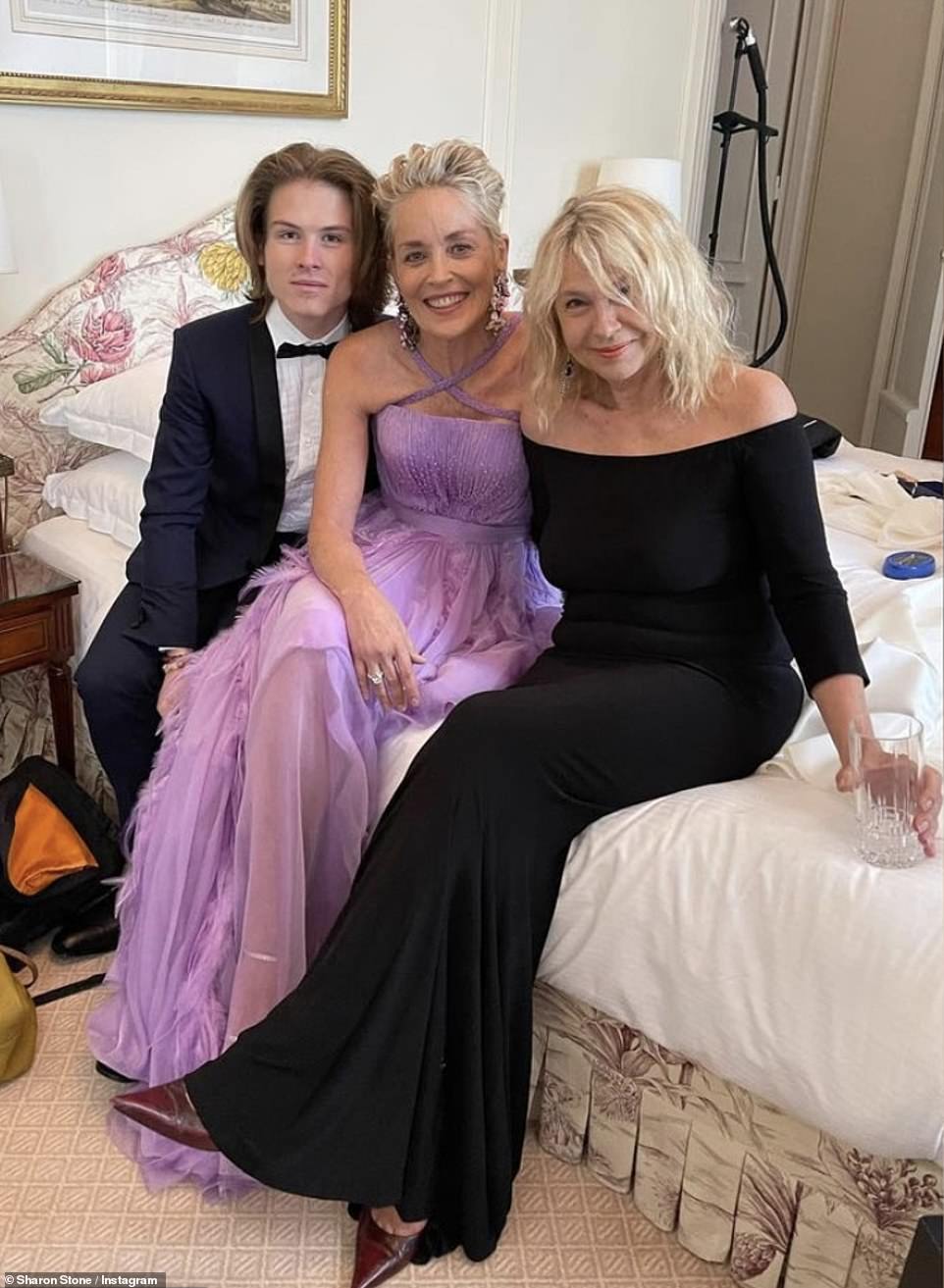 Quick photo beforehand: Sharon sat on her hotel bed with son Roan to pose for a snap before leaving for the star-studded event 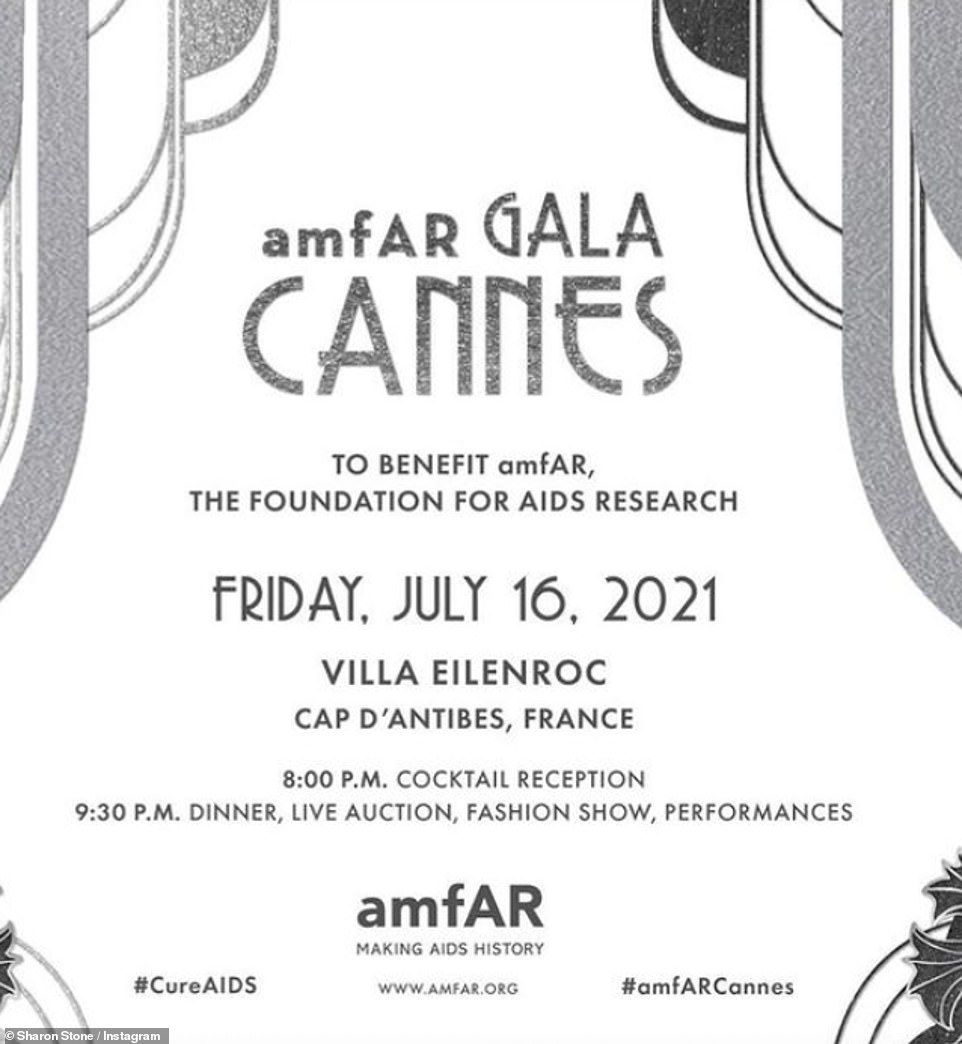 Amazing! The amfAR gala is one of the world’s most successful benefit events and the most coveted ticket in town during the Cannes Film Festival

No Cuba protesters were arrested after blocking I-95. Local activist calls it a double standard