‘She was great’: Piers Morgan reveals heartfelt tribute to the Queen he was sent by Donald Trump 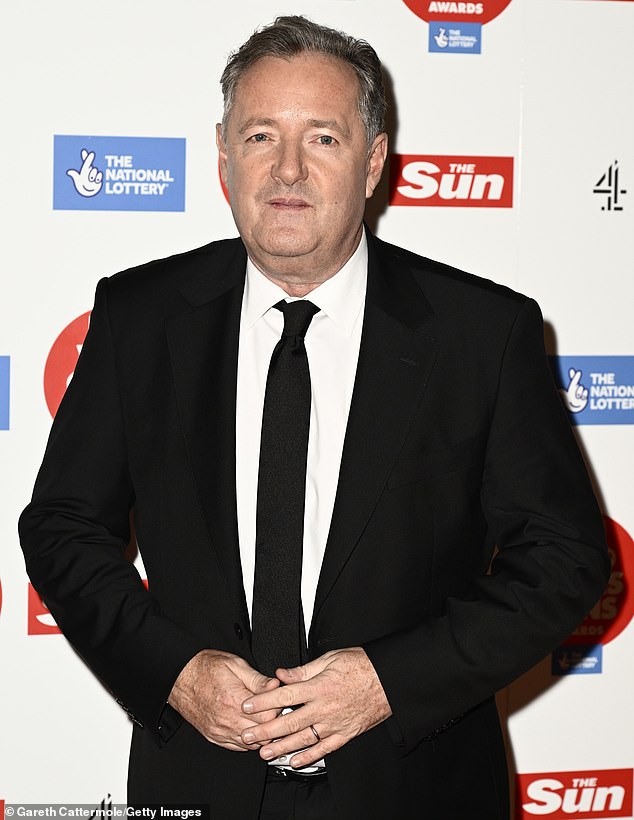 ‘She was great’: Piers Morgan reveals heartfelt tribute to the Queen he was sent by Donald Trump – but says his interview with Cristiano Ronaldo pulled in MORE viewers than his chat to the President

By Callum Wells and Stewart Carr and Julian Bovill For Mailonline

Piers Morgan has shared details of a heartfelt tribute to the late Queen sent to him by former US President Donald Trump.

The Talk TV broadcaster was at the Roundhouse in London tonight attending the Sun’s Who Cares Wins Awards in support of the NHS.

Speaking from the red carpet, Morgan revealed he had been in touch with Trump following an awkward interview on Talk TV in April, in which the former Republican leader appeared to walk out.

Morgan said: ‘He sent me a note about the Queen actually. It said, “Piers, she was great. Kind regards, Donald.” Literally. That was after I asked for an interview.’

Morgan previously wrote that the April interview ended with Trump ‘abruptly jumping to his feet, looking hateful, and barking at the shocked crew: “TURN THE CAMERAS OFF!”

Talk TV broadcaster Piers Morgan was at the Roundhouse in London tonight attending the Sun’s Who Cares Wins Awards, when he revealed Trump’s tribute to the late Queen

Morgan revealed he had been in touch with Trump (pictured) following an awkward interview on Talk TV in April, in which the former Republican leader appeared to walk out

Morgan said: ‘Trump sent me a note about the Queen (pictured) actually. It said, “Piers, she was great. Kind regards, Donald.” Literally. That was after I asked for an interview.’

‘Then he turned on his heel, and sloped angrily off through a side door, loudly muttering, ‘SO dishonest …” added Morgan.

But according to NBC, the audio provided by the Trump camp shows the interview actually ending with Morgan saying: ‘That was a great interview.’

Morgan also revealed that his interview with Cristiano Ronaldo in 2019 actually pulled in more viewers that that with Trump.

He said: ‘Gotta build up contacts. I interviewed him three years ago. He actually likes my crime documentaries. That’s how it all started.

‘So he messaged me out of the blue because he liked my crime documentaries. And he messaged me on Instagram. where he’s the most followed human being in the world. And I suddenly got this thing in my inbox from Christian Ronaldo. I thought, “It can’t be.”

‘The next thing, he was on the phone and we had a chat about crime. He loves the crime docs. And then I interviewed him in Turin – we built up a friendship, we stayed in touch. And then when he was ready to talk this time, he came to me.’

‘Just for the record, Ronaldo beat Trump in the ratings,’ Morgan added. ‘I would happily interview Cristano any time he wants.’

Asked about his dream interviewee, Morgan said: ‘The pope would be good. I don’t know if he’ll be watching tonight but he’ll be good. Well, I’m a Catholic, so it would be quite a big deal to interview them. But I’ve never interviewed a Pope, so that would be great. He’d be up there.

Earlier today, Morgan once again moved to urge Arsenal to sign Cristiano Ronaldo – tweeting a picture of the Portuguese superstar holding up a shirt in their interview together.

As a result of his bombshell interview with the broadcaster last week, Ronaldo and Manchester United mutually agreed on Tuesday to terminate his contract at the club.

Posting the image in which Ronaldo was handed the Arsenal shirt, Morgan cryptically captioned the tweet ‘time for phase two’.

It the latest in a long line of jovial attempts by the broadcaster to get the Portuguese to join the north London club.

In the summer, when reports began to emerge of Ronaldo’s unhappiness at Manchester United with the club having failed to qualify for the Champions League, Morgan tweeted ‘it’s time’ alongside a photo of him handing a shirt to the Portuguese.