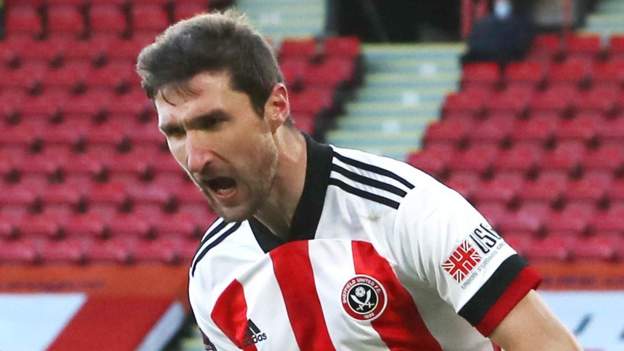 Premier League strugglers Sheffield United gained only their third win of the season as they beat Plymouth Argyle in their FA Cup fourth-round tie.

The Blades, bottom of the Premier League, went ahead when Chris Basham headed in from Billy Sharp’s cross.

Panutche Camara, who missed a good chance in the first half, pulled one back with a low strike, but the Blades held on to move into the fifth round.

Sheffield United play at home to Championship side Bristol City in the fifth round after the Robins defeated Millwall.

The Blades failed to win in any of their opening 18 matches in all competitions in 2020-21 before knocking out League One side Bristol Rovers 3-2 in the third round of the cup and a 1-0 league victory over Newcastle.

Club record signing Rhian Brewster, still looking for his first Blades goal since a £23m move from Liverpool in October, had two early chances against the Pilgrims but headed wide from 12 yards out and then had a 25-yard strike saved by Cooper.

Plymouth, who eliminated Championship Huddersfield Town in the third round, should have opened the scoring but, following a fine passing move, Camara shot wide when unmarked 12 yards out.

The hosts were then unlucky not to have a penalty as Ethan Ampadu’s shot was blocked by the arms of Plymouth defender Kelland Watts, with the incident going to the video assistant referee.

But the Blades went ahead in the 39th minute as Sharp’s cross was powerfully met by a Basham header, before Sharp scored himself soon after the restart.

Camara set up a thrilling finish when he scored following substitute Byron Moore’s pull-back. Plymouth’s Ben Reeves had a chance to force extra time but shot just wide as the Premier League team gained the victory.

Psychiatric trauma: the hidden toll of the Covid Pandemic

The Code of Influence