By David Rudge For Mailonline

This is the shocking moment a hospital worker brawls with a patient on the floor of a waiting room and kicks him while he is down following a heated argument.

The video, filmed by a witness, showed patients and staff watching in horror as the pair scuffled and traded blows at the Whittington Hospital, near Upper Holloway in north London yesterday.

The patient – who is understood to have been at the hospital for a spinal procedure – accused the employee of ‘touching him’ before the violence erupted. 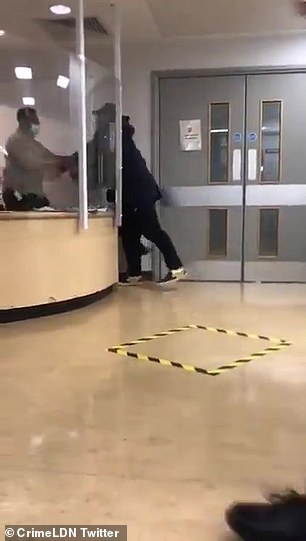 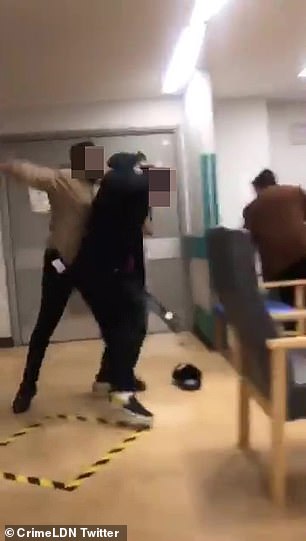 The male staff member was then seen punching the patient before dragging him to the floor – as panicking members of staff pleaded in vain with the two men to stop.

The clip starts with the patient shouting at the staff member as the two push and shove each other in the entrance to the reception area of the waiting room.

The patient says: ‘You’re touching me,’ then shoves him in the chest and shouts: ‘What are you doing? Why would you do that?’ 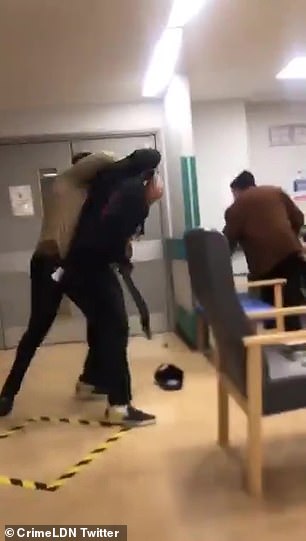 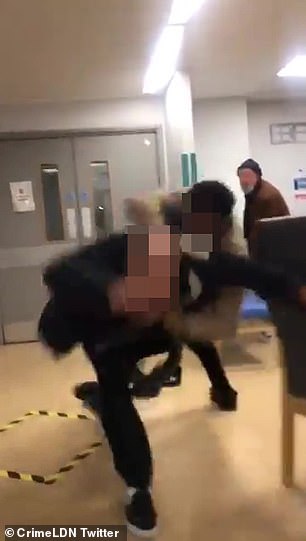 The employee appears to shove him back and the patient blasts: ‘You’re supposed to look after people.’

A scuffle breaks out between the two men as a female staff member desperately cries: ‘Stop. Stop.’

Patients are seen hurrying out of the way as the pair continue to struggle.

The staff member repeatedly hits the patient before slamming him to the floor.

He appears to punch the patient in the head while he is down and kick him in the back. 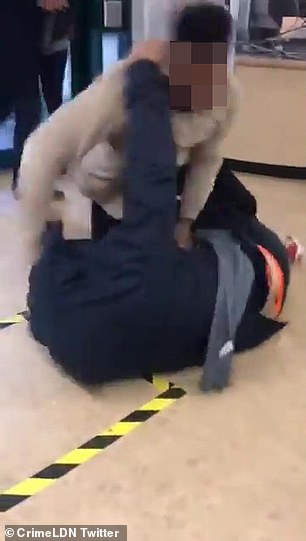 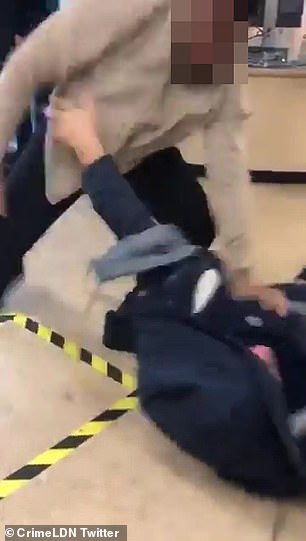 A man in green scrubs steps in between them and ushers the employee away, as the patient follows and screams: ‘Think about your job. Look what you do. You’re supposed to look after us.’

Footage of the incident was shared anonymously on social media yesterday and has been viewed more than 160,000 times.

One who was shocked at the violence wrote: ‘People don’t go to work to be abused, this includes nhs staff who’s pay wouldn’t even cover it. where was security?’

However another thought it was unprofessional, writing: ‘That is a sackable offence as it’s showing unprofessional behaviour and bringing the company into disrepute’.

A spokesman for Whittington Health NHS Trust said: ‘We are aware of an incident which took place in our Day Treatment Centre yesterday.

‘The incident is being investigated by the police and we have begun an internal investigation.

‘Violence or aggression towards our staff is never acceptable and we are taking the matter extremely seriously.’

The Metropolitan Police have also been contacted for a comment.