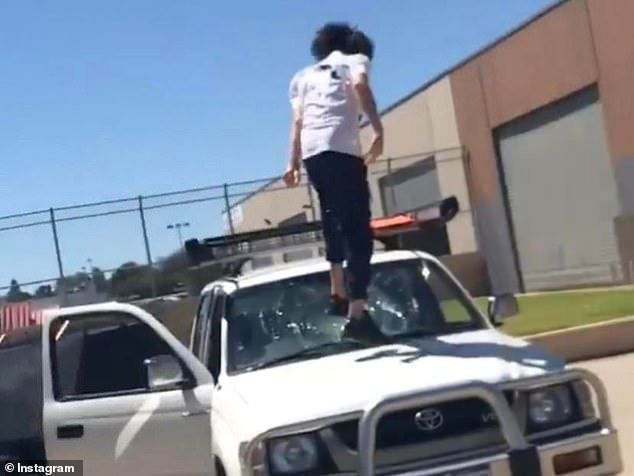 Shocking moment gang of teenagers at a school for troubled kids attack two tradies hired to fix a burst fire hydrant – smashing their work car and throwing punches while yelling ‘bomb him!’

The shocking moment a group of students went on a rampage at a school for at-risk teens and attacked two tradies has been captured on camera.

About 10 students were seen in vision livestreamed to Instagram running wild at the SMYL community college in Rockingham, south-west Perth, on Tuesday after the workers arrived to fix a burst fire hydrant.

The two men were subjected to verbal abuse after appearing on site, before the confrontation quickly escalated as students surrounded the two men and started throwing punches after trapping them in a corner.

The rowdy students could be heard egging each other on with chants of ‘bomb him, bomb that motherf**ker’ and ‘keep going’ while the tradesmen desperately tried to fend for themselves.

A group of about 10 students at the SMYL Community College in Rockingham went on a wild rampage on Tuesday after two tradies arrived to fix damage to the school. Pictured, a student captured in footage posted online kicking the front windscreen of the tradies’ work car

Another student was seen smashing the front windscreen of the tradesmen’s work vehicle after jumping on the bonnet amid cries of ‘let’s smash his car’.

Terrified students not involved in the ferocious attack ran for cover, locking themselves in classrooms and hiding under desks as the violence unfolded.

Police were forced to intervene after being called to the school about 1:40pm, with officers investigating what exactly sparked the brutal brawl.

SMYL Community College director Sam Gowegati said a number of students have since been suspended over the incident, with a probe into their actions underway.

Police are now investigating what sparked the incident, with a number of students at the school suspended

‘It is an atypical event. We’re just trying to figure out what happened and what triggered it,’ Mr Gowegati told The West Australian.

‘A number of students have been currently sent home to decide what their futures are going to be.’

Mr Gorwegati said they were reviewing their procedures as under college policy tradesmen were not usually on site during school hours.

The White House: The intelligence report on Khashoggi’s killing will be published soon