Businesses and cities across the country are requiring people to wear masks, which some people say infringe upon their individual rights.

Melissa Rein Lively’s spiral in an Arizona Target was caught on video for all to see. She recorded herself destroying a mask display in early July – something she now says she regrets and is in treatment for mental illness.

In an exclusive interview with USA TODAY, Rein Lively, the CEO and founder of a public relations firm, said she lost all of her clients and her husband filed for divorce after the videos of her expletive-filled rants went viral.

“I think mental illness has been really something that has not been addressed as a result of this pandemic,” she said. “Because what happened to me was scary and it changed my life forever. I felt I had absolutely no control over my actions.”

After her manic meltdown in the store, Rein Lively said she was taken for a psychiatric evaluation after her husband called police from their home. She said she stayed in a mental health facility for over a week.

Save better, spend better:  Money tips and advice delivered right to your inbox. Sign up here

Conflicts at businesses from Costco to Trader Joe’s over being asked to wear masks have erupted in recent weeks, seen in viral videos of shoppers’ tirades, as coronavirus cases surge.

At a Florida Costco Wholesale Club in late June, Daniel Maples was captured in a viral video that showed him yelling at another customer during an argument about face masks. Maples said the video didn’t show the story and that since the video went viral, he lost his job and received hundreds of threatening texts, emails and voicemails.

For some who have watched the videos, which have come in rapid succession showing people being combative over masks or stoking a racially charged exchange, the routine follow-up apologies may fall flat amid the consequences of getting caught behaving badly in public.

Like Maples, Rein Lively said she received threatening messages after her July 4 Target trip in Scottsdale, Arizona. She said she’ll be going to a treatment program next week and wanted to share her story to let others struggling “know they are not alone in facing mental illness.”

Experts say for many people the negative mental health impacts will outlast the current crises. Research suggests the extreme stress triggered by these events may even lead to longer-term psychiatric disorders. A recent study estimates deaths from alcohol, drug overdose and suicide as people suffer amid the social isolation imposed by the pandemic could reach 150,000. 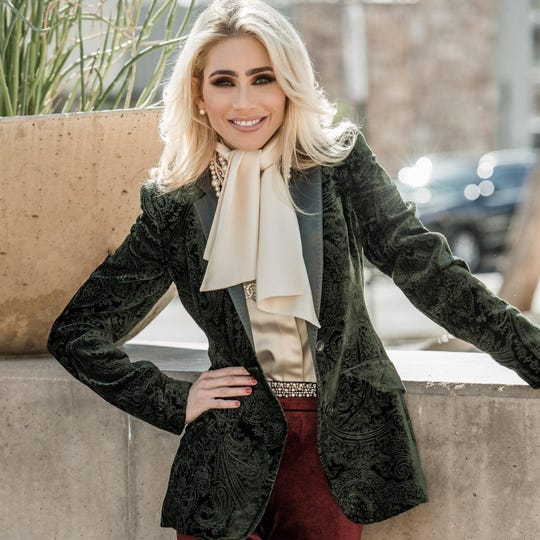 The Target incident wasn’t the first time there was concern about Rein Lively’s mental well-being and behavior.

As reported by the Arizona Republic, part of the USA TODAY Network, a former associate expressed uncertainty about some of their previous exchanges and Rein Lively’s social media postings, in some of which Rein Lively had used the N-word.

“I feel real sad for what she’s enduring from a mental health standpoint,” said Adrienne Bryant, who had hosted a Black economic forum at her commercial real estate office that was organized by Rein Lively.

Bryant, who is Black, told the Republic she was reassessing her interactions with Rein Lively, trying to determine what behavior was caused by mental illness and what was a reflection of her true self.

Rein Lively shared the video of her pulling masks down at Target on her social media accounts, but it went viral when Twitter user @RexChapman posted it and has been viewed more than 10.1 million views as of Wednesday night. In the video, she shows off her Rolex watch and declared it was worth $40,000.

In addition to working to recover her mental health, she says she knows she has work to do to also rehabilitate her professional reputation.

“It’s going to take a long time for me to rebuild the trust from people, you know as I get my life and career back on track,” she said. “I love what I do and am passionate about what I do and I’m going to fight this.”

This woman in Scottsdale, Arizona was super upset with Target for selling face masks. So upset in fact, that she attacked their display….pic.twitter.com/ye9LiDz0JH

Extreme stress from the pandemic, she said, triggered what she called a “manic bipolar episode.”

“I can absolutely see that how I acted was unbelievably inappropriate not to mention classless and just completely out of character for how I conduct myself, professionally and personally,” she said.

Target had said in a statement to USA TODAY in early July that “a guest ransacked” the mask display in one of its Scottsdale stores and the Salt River Police Department was called for “additional support.”

Rein Lively said she picked up all the masks and put them in a cart and offered to buy them but was told she couldn’t.

Though police spoke to her at Target and let her go, when she got home, she said, her husband called police out of concern about her mental state. She livestreamed the exchange on Instagram. It was in that video that she told officers she had connections at the White House, asked officers to call President Trump and said she was a spokesperson for QAnon.

“Everything that I was kind of doing was facetious and sarcastic and I realize now the world, obviously, took everything I was saying seriously like I really believed that,” she told USA TODAY. “I was not arrested, I was taken in for a mental health evaluation. That was something that like really opened my eyes to this whole process.”

Her husband, Jared Lively, told the Arizona Republic, that he started getting text messages from friends who had seen the Target video on Instagram on July 4.

He said he feared it was an escalation of a days-long decline in his wife’s mental health and a continuation of a problem that he said had manifested itself the year before.

“There’s a lot of people that have a manic episode like this,” Jared Lively said during an interview with the Republic, noting he had received death threats. “They just don’t film it.”

“I certainly want to respect others in the community and follow whatever mandates,” she said. “I understand you know that masks are necessary for business to continue to operate which for me was obviously you know, my biggest frustration all this.”

Official Site: The Romantic’s Guide To Popping The Question

Will Smith has fans thinking Jason Derulo knocked his teeth out

Distributing masks and sanitizer a challenge for 2020 election