Simeone: We have a very difficult match against Liverpool in the Champions League 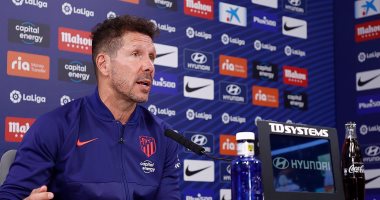 Atletico Madrid coach Diego Simeone expressed his happiness after the Spanish champions snatched the points of their match against Milan 2-1 with a deadly goal in the sixth minute of stoppage time in the match that was held between them on Tuesday evening at the “San Siro” stadium. In the second round of Group B in the UEFA Champions League.

Simeone said in statements after Milan’s match against Atletico Madrid: “In the beginning, Milan was superior. They started well with a fast and dynamic match. After Casey was sent off, they gave up a little and we entered the match.”

Simeone added: “In the second half we played with the desire to win against a team that closes well. We needed that victory.”

Simeone stressed: “In 11 against 11, Milan performed better. In the second half, we tried in every way in attack to look for a tie and win.”

The Atletico Madrid coach said: “Liverpool is very strong, difficult matches await us, and Porto and Milan will do everything to play their cards in the remaining matches, we will try to take points from all of them.”

Simeone said: “I am very happy for Griezmann, a great goal from an extraordinary player, we need him and we will ask him for more.”

Simeone continued: “A lot of times they wonder if they can all play together. Well they all played together, there was Joao, Lemar, Correa, De Paul, Griezmann, Suarez… They all managed to get along well on the field and we won.” It was a very important match.”

The coach of the Spanish champions continued: “I believe in my players, I know we have a very good team. It is clear that we still did not manage to achieve regularity in the matches, we tried in different ways and gave everyone almost minutes … but we have to find what makes us the best as a team “.

“Every player I have has to know that the time they spend on the field can be decisive because they are very good,” Simeone said.

Simeone continued: “Winning today is much more important than what happened in the match because the group is difficult, Liverpool is very strong, and Milan played their matches very well.”

And in response to Pioli’s statements in which he said that the referee was not better in his day? Simeone said: “If I were him, I would say that the sending off is incorrect and that there is no penalty, but if you look at it from my side, the dismissal is correct and the penalty is correct.”

And Simeone added: “I have always loved the San Siro even when we had to lose. I always have very good memories of Milan with an extraordinary atmosphere, and the return of Griezmann and Suarez to goal in important matches brings confidence.”

The goals of the match came through Rafael Leao in the 20th minute of the match, before Atletico Madrid returned in the 84th minute through Antoine Griezmann, returning after the absence of the Spanish champion, and Luis Suarez in the 96th minute from a penalty kick.

With this result, the Atlético Madrid team moved up to second place in the group standings with 4 points, after its draw in the first round against Porto.

While Milan are bottom of the group standings, after the team fell for the second time into the trap of defeat after receiving a severe loss in the first round against Liverpool.

Pochettino: I am happy with Paris Saint-Germain’s performance.. That’s why I celebrated Messi’s goal