Simone Biles has reflected on her experience at the Olympics a month after the Tokyo Games while hitting back at critics who called her a ‘quitter’ for withdrawing from four out of five event finals to focus on her mental health.

The 24-year-old gymnast, who took home a silver medal for the women’s team all-around and a bronze for the balance beam, took to Instagram on Saturday to show off her two medals.

‘Can’t believe it’s already been a month. Definitely not the way I planned the Olympics going but I wouldn’t change anything for the world,’ she captioned the image. ‘I’m proud of myself and the career I’ve had thus far.’ 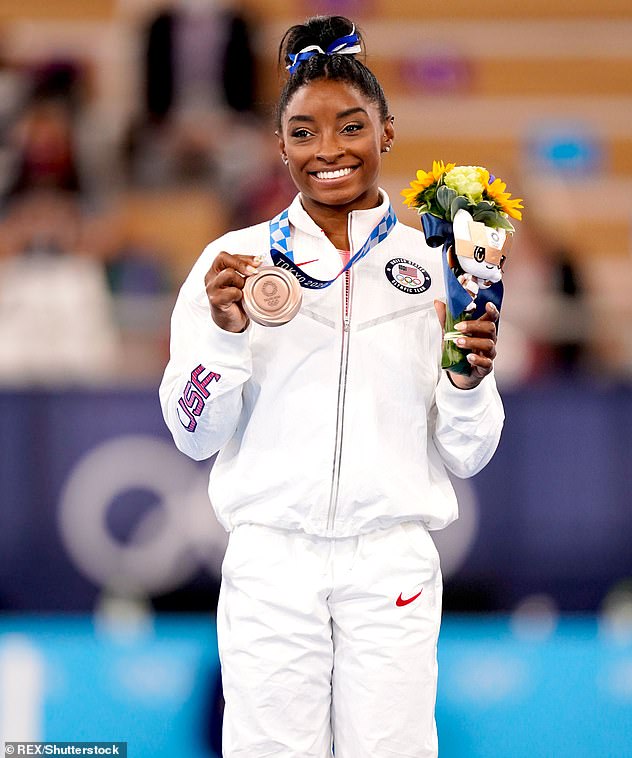 Take that: Simone Biles, 24, has clapped back at critics who call her a ‘quitter’ a month after the Tokyo Olympics, saying she ‘wouldn’t change anything for the world’ 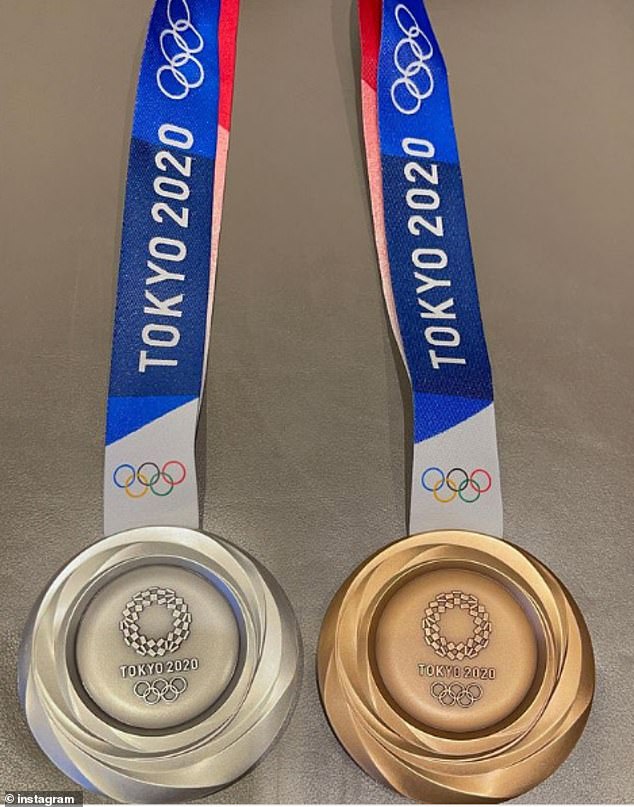 Bling: The Olympic gymnast took to Instagram on Saturday to show off her silver and bronze medals from the 2020 Games

Biles stunned the world when she withdrew from the all-around competition in late July to focus on her mental health, and while she received a great deal of support, some accused her of ‘quitting’ and ‘abandoning’ her teammates.

She later dropped out of the individual all-around, uneven bars, vault, and floor exercise finals. The Olympian said she was suffering from ‘the twisties,’ a mental block that causes gymnasts to feel like they are ‘lost in the air.’ 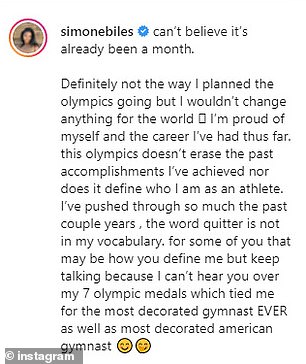 Candid: In the caption, she reflected on her experience at this Olympics

She returned to competition in time for the balance beam final and ended up winning a bronze medal — the same podium position she found herself on in Rio de Janeiro.

Biles left the 2016 Rio Olympics with a haul of five medals, including four golds.

‘This Olympics doesn’t erase the past accomplishments I’ve achieved nor does it define who I am as an athlete,’ she wrote in her post. ‘I’ve pushed through so much the past couple years, the word quitter is not in my vocabulary.

‘For some of you that may be how you define me,’ she added, ‘but keep talking because I can’t hear you over my seven Olympic medals which tied me for the most decorated gymnast EVER as well as most decorated American gymnast.’

Biles’s message received more than 850,000 likes and thousands of comments from supportive fans, including a number of celebrities. 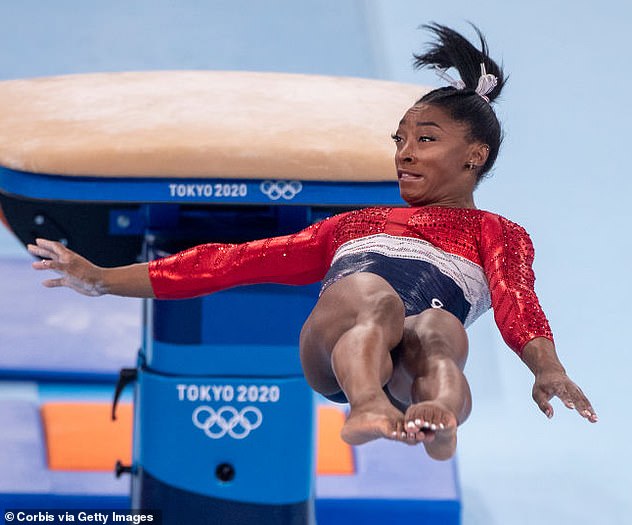 Shock: Biles stunned the world when she pulled out of the team final in Tokyo after flubbing her vault during the first event 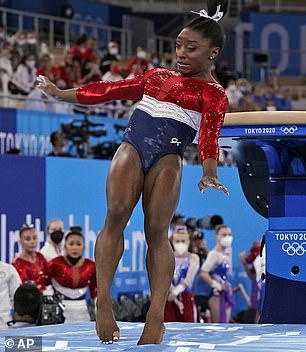 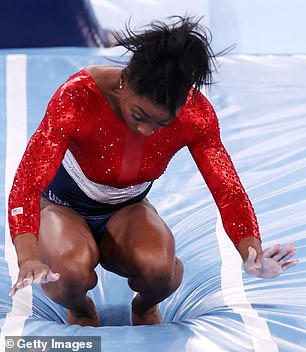 Battle: Following the team final, Biles cited her mental health as the reason for her withdrawal, and she later revealed she was struggling with the ‘twisties’ which made her feel ‘lost in the air’ 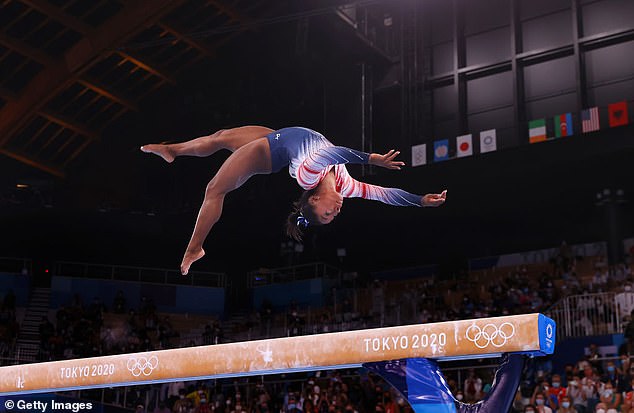 Hitting back: ‘This Olympics doesn’t erase the past accomplishments I’ve achieved nor does it define who I am as an athlete,’ wrote Biles, who took home the bronze in the beam final

‘You are the most remarkable human ever to exist,’ Beanie Feldstein gushed.

Biles also received love from her teammate Jordan Chiles, who commented: ‘Preach! Say it louder for the people in the back.’

‘You have the nation in a CHOKEHOLD,’ her sister Adria Biles shared.

Meanwhile, fans thanked her for putting a spotlight on the importance of prioritizing mental health.

‘The example you set was far more valuable than any medal,’ one Instagram user pointed out.

Biles has remained fairly tight-lipped on whether she will continue training for the 2024 Olympics in Paris, but she did recently concede on the Today show that she is ‘leaving the door open’ for the next Games.

Fans: Biles’s message received more than 850,000 likes and thousands of comments from supportive fans, including a number of celebrities

If she is to make it to Paris, she will be 27 years old and likely the oldest gymnast competing for Team USA.

Biles’s post comes just days after she revealed that dropping out of multiple Olympic finals amid struggles with her mental health made her ‘feel human’ for the ‘first time.’

She made the admission to her mother, Nellie, during an interview for Athleta in which they discussed her decision to withdraw from several events in Tokyo.

The gymnast had gone into the 2020 Olympics as the favorite to win almost every competition, but after nearly crash-landing a vault, she pulled out of the team all-around final with three events left to go.

She explained that she needed to ‘focus on her mental health’ and subsequently withdrew from the uneven bars, vault, and floor exercise finals.

While Biles had to deal with criticism online, she said the response to her withdrawal inside the Olympic Village was actually much more positive than she’d been expecting.

She admitted that she thought she would face ‘backlash’ and ’embarrassment’ over her decision, but the opposite was the case. 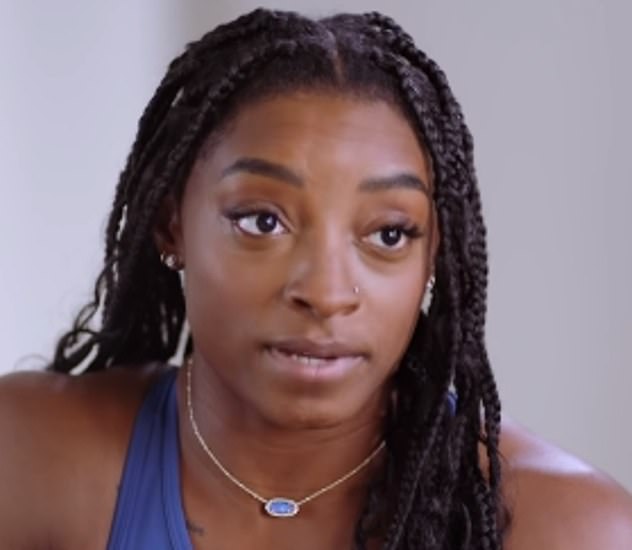 Speaking out: Biles’s post comes just days after she revealed that dropping out of multiple Olympic finals amid struggles with her mental health made her ‘feel human’ for the ‘first time’ 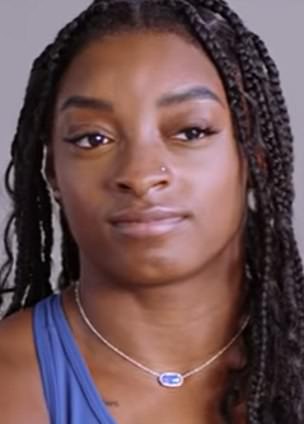 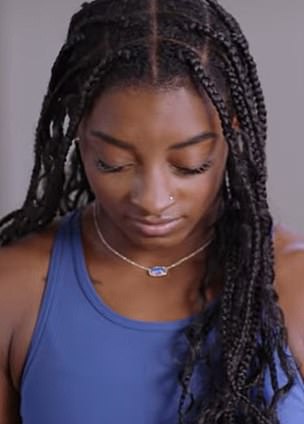 Opening up: She made the admission during an interview with her mom, Nellie, for Athleta while discussing the mental health struggles that blighted her quest for Olympic gold in Tokyo

In fact, the athlete said ‘pulling back’ from gymnastics gave her an opportunity for the first time to make herself known for something other than her sporting achievements.

‘Over the years, because I’ve been so dominant, everybody [has supported] the gymnastics and praised me for what I’ve done in the gym and not really outside [of it],’ she told her mother.

‘Once I took a step back, I obviously was expecting to feel a lot of backlash and embarrassment. But it’s the complete opposite. And that’s the first time I felt human. Besides “Simone Biles,” I was Simone and people kind of respected that.’

Heading into the Tokyo Olympics, Biles was widely viewed as the greatest female gymnast of all time, having earned 19 World titles and five Olympic medals — all while performing a number of skills that were so difficult, no other woman had ever attempted them in competition.

The gymnast noted that there is a dark side to her success, saying that many athletes like herself see their behind-the-scenes struggles with mental health go unnoticed because they are often only recognized or supported for their performances.

She hopes that her decision to speak out about her own mental health issues will increase awareness about the stress of dealing with the high-pressure situations that elite athletes have to face in their day-to-day lives.

‘Nobody understands the platform that we’re on,’ she said, adding: ‘Not a lot of people can relate to winning and to being an elite athlete and to doing the things and breaking the barriers that we’re doing. 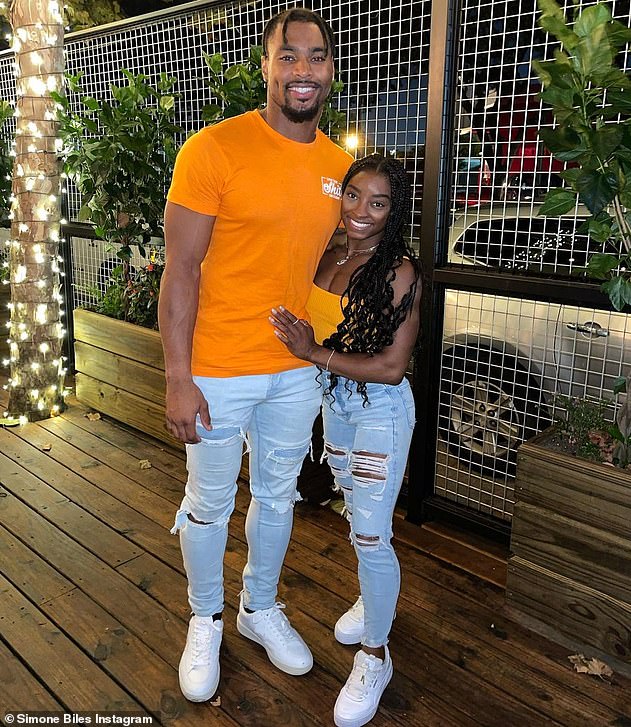 Helping hand: Speaking about the ways in which she protects her mental health Biles, who is seen with boyfriend Jonathan Owens, said she relies on a close circle of friends and family 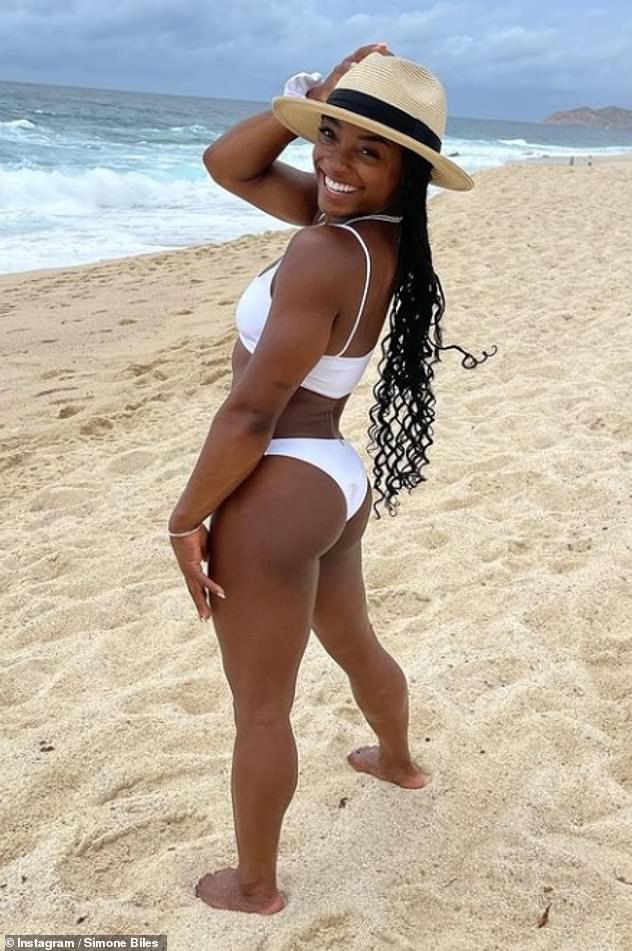 Fit and active: When it comes to her physical health Biles, who just returned from vacation in Mexico, said she tries to balance regular workouts with healthy ‘fuel’ for her body

Biles continued: ‘I know that I helped a lot of people and athletes speak out about mental health and saying no.’

As well as the show of support that she received from other athletes in Tokyo, Biles said she was also met with support online, including from two A-list celebrities: Justin Bieber and Demi Lovato.

‘Justin Bieber reached out and he messaged me, so did Demi Lovato,’ she shared.

Biles told her mother that she made the decision to withdraw from competition at the Olympics to both protect herself and to ensure that she wouldn’t risk her teammates’ chances at medaling in the team event.

‘I knew I couldn’t go out there and compete, I knew I was going to get hurt,’ she said, adding: ‘I definitely had the team in my best interests and that’s why I decided to pull out.

‘I didn’t want to potentially lose a medal spot for them because the girls were more than prepared to go in and do their job, which they did.’

Biles admitted that she believes her mental health struggles actually began before she arrived in Tokyo, but she didn’t pay attention to them until they started to have an impact on her performance.

‘I wouldn’t even say it started in Tokyo. I feel like it was probably a little bit deeper rooted than that,’ she explained.

‘I think it was just a stress factor that kind of built up over time and it just…my mind and my body just said, “No.”

‘Even I didn’t know I was going through it until it just happened. It just sucks, you train five years, it doesn’t go the way you wanted…’