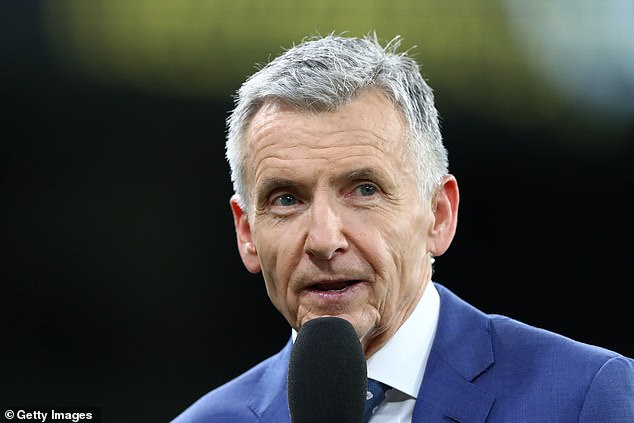 The full-time siren has blown on Bruce McAvaney’s distinguished career in the AFL commentary box after calling more than 1,000 games.

The legendary Channel Seven broadcaster, 67, shocked footy fans on Sunday by announcing that last year’s grand final was his last behind the mic at an AFL match.

Regarded for decades as the voice of the AFL alongside co-commentator Dennis Cometti, it was a difficult decision to walk away.

‘I felt like I got to a stage in my career where I had to reduce my workload,’ McAvaney told Seven News.

‘I’m going to miss it enormously, I just visualise when Richmond and Carlton run out there in round one, and the ball is bounced, I’m going to climb a wall somewhere.

‘I’m going to have to move on and just be a fan like everybody else.’

McAvaney insists the decision to step back wasn’t health-related, having previously battled leukaemia in 2017.

But fans will be relieved to hear McAvaney won’t disappear from our television screens just yet.

The full-time siren has blown on Bruce McAvaney’s distinguished career in the AFL commentary box after calling more than 1,000 games

He’ll remain involved in Seven’s horse racing coverage and will call the Tokyo Olympics for the network later this year.

‘[I’m] certainly not anything close to retirement, it’s just a new phase, where I cut back slightly, and anything I’m asked to do at Seven I’m going to do with the same enthusiasm and same commitment,’ he said.

‘I still feel like there’s a bright future, in a ridiculous way I feel like I haven’t reached my potential, I still want to get better, and that’s what I’m hoping to do over the next few years,’ he added.

He has been on the Seven’s screens since joining the network in Adelaide in 1978 and has called 20 AFL grand finals in that time.

McAvaney has been at the front of the AFL’s free-to-air coverage part from apart from a five-year absence between 2002 and 2006 when Seven lost the television rights to Ten.

James Brayshaw will fill McAvaney’s vacancy in Seven’s commentary box this season, which gets underway in March.

Al-Halbousi: Representatives of diplomatic missions in Iraq should not interfere in matters that do not concern them