Sisters, aged 8 and 5, face being orphaned as their mother battles terminal cancer


Sisters, aged 8 and 5, face being orphaned as their mother battles a rare terminal cancer four years after their father died of a blood clot


A widowed mother-of-two is fundraising for her daughters’ future after she was diagnosed with terminal cancer.

Helen Davy, 44, faces the heartwrenching prospect of leaving her girls Annalise, eight, and Kairen, five, just four years ago after her husband John died of a blood clot.

The IT manager, from Rotherham, has been diagnosed with rare cancer Pseudomyxoma peritonei (PMP), which has spread to her appendix, bowel, stomach, colon and pelvis.

She is now raising money in the hope of making memories with her daughters and providing some financial support in the future. 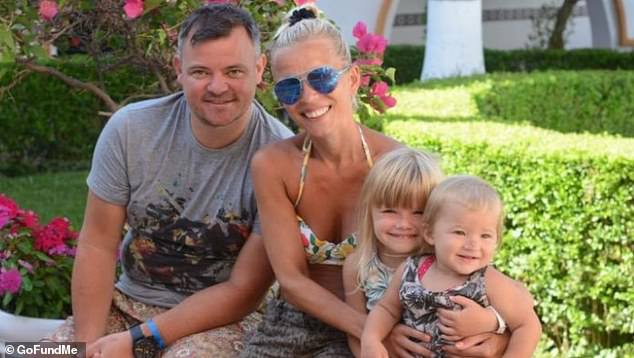 Helen Davy, 44, faces the heartwrenching prospect of leaving her girls Annalise, eight, and Kairen, five, just four years ago after her husband John died of a blood clot

Helen, whose daughters will be raised by her twin sister, told the Yorkshire Post: ‘My first thoughts weren’t for me but for my girls and what was going to happen to them… All the money will go to the girls and their future.

‘I don’t want to take them on some lavish holiday abroad, to me it is about having fun while we can and that doesn’t cost a fortune.

‘We have a kitchen disco every Saturday and we are planning to go to Butlins as I sometimes struggle to do things due to the pain. I am also making some memory boxes for them.’

Helen first noticed something was wrong when she developed a limp and a stomach ache about a year ago. Doctors initially put the pain down to appendicitis.

A couple of months ago, Helen was referred for scans that revealed the pain was due to a tumour in her appendix that the cancer had spread.

The mother-of-two is starting chemotherapy soon and said she is ‘determined’ to make it to Christmas.

Family friend Paul Keeton has set up a Go Fund Me page to raise money for the family.

Sharing a photo of Helen and John with their girls, he wrote: ‘The photo is of our friend Helen, John and their two beautiful children Annalise and Kairen. Helen’s husband John and the girls’ dad tragically lost his life 4 years ago.

‘Heartbreakingly Helen has been dealt the most devastating news that’s she’s terminally ill.. Helen has stood strong and done a fabulous job of parenting whilst keeping her trademark smile and positive attitude throughout. Recently she has shown the courage and determination I can’t comprehend.

‘Feeling worthless and unable to make this better we have decided to setup this page as some way of showing our love and support to our dear friend and her wonderful children.

‘For the donation you’ll get to see this middle aged overweight slob complete 5k every day for 4 weeks (start date to be confirmed). I’ll post daily either videos or the route via a running app.

‘I have a planned route Lesley, Joanne Shaw & Becky Lee are all on board and are massively involved in this page. It would be great if anyone else wants to get involved, even if it’s just for part of the route.’

Money raised will go towards making lasting memories for Helen and her girls.

He added: ‘I just wanted to set it up as I wasn’t sure what else that we could do to help them.

To donate to the Go Fund Me appeal click here.