Six Nations 2021: England’s Billy Vunipola says Covid rules are tough but worth it 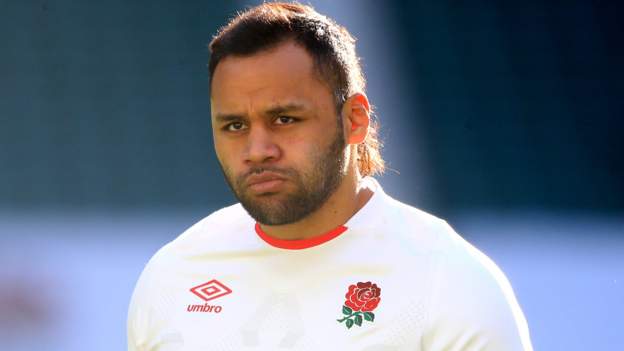 England’s Billy Vunipola says strict coronavirus rules in camp are challenging, but worth it to avoid an outbreak like the one affecting France.

Les Bleus will find out on Wednesday whether Sunday’s Six Nations match against Scotland can go ahead after 10 players tested positive for Covid-19.

England players can socialise outdoors but are largely confined to their hotel rooms when not training or eating.

Vunipola said the rules came as a “shock” when the tournament began.

England trained in a coronavirus bubble during their successful Autumn Nations Cup campaign.

Restrictions became stricter still when they returned to camp before the Six Nations and Vunipola says the isolation was particularly hard to deal with following England’s opening loss to Scotland.

“We came into this camp thinking everything would fall into place like it did in the autumn,” the 28-year-old told BBC Radio 5 Live.

“Restrictions got stricter and time together as a team became harder to come by because of the two-metre rule. Face-to-face time was policed way more strictly.

“That was a shock to some of us – to me especially. I remember saying to Andrea [Furst, team psychologist] that I’ll be fine spending time in my room.

“But being in your room by yourself alone with your thoughts isn’t very nice when you aren’t doing very well.”

‘No way you can come back’ from Covid outbreak

France are top of the Six Nations table after winning opening games against Italy and Ireland, but their campaign has been thrown off course by the coronavirus outbreak.

Head coach Fabien Galthie and another member of the backroom staff tested positive for Covid-19 on 16 February and the virus then spread among the players.

Les Bleus’ testing revealed more cases throughout the week and the number of players isolating currently stands at 10.

The French Rugby Federation announced on Tuesday that there had been no positive results in the latest round of testing.

“You realise how important it is that we maintain our distance, wash our hands and wear the masks,” Vunipola said.

“Your campaign could be down the toilet with one positive case because you have two or three people with close contacts and then that’s it. There’s no way you can come back from it.”

‘Wales fancy themselves and they should’

Defending champions England are third in the table after following up defeat by Scotland with victory against Italy.

Vunipola failed to make his usual impact in both games and was replaced by Ben Earl in the 58th minute against Italy.

The Saracens back row said he would not “hide away”, adding: “I’ve found myself in a situation where I have to work harder to get into the team and do really well.”

On Saturday, England face a Wales side chasing a Triple Crown in Cardiff after opening wins against Scotland and Ireland.

Eddie Jones’ team go into the match as favourites and will not have to contend with a hostile Welsh crowd, but Vunipola is expecting a tough day at the Principality.

“Everyone says it is Cardiff with no crowds,” he said. “It is still a very experienced Welsh team who are doing really well at the moment.

“They are going to fancy themselves and so they should. We know how important this weekend is to keep our campaign on track.”

PlayStation VR 2 Confirmed, Will Come With a New Controller

Meghan McCain expressed vaccine envy. The feeling is normal but it can become dangerous

Meghan McCain expressed vaccine envy. The feeling is normal but it can become dangerous