Six Nations: 2021 tournament could be delayed to allow crowds


The 2021 Six Nations could be delayed in an attempt to ensure matches are played in front of crowds.

The tournament is scheduled to begin in February but initial talks have taken place about pushing it back.

England’s Rugby Football Union has projected a £138m loss should fans not be allowed in stadiums, and the other nations have similar concerns.

Six Nations chief executive Ben Morel told The Times that a delay was “one of the options”.

“We have to look at everything right now,” he said. “We need fans back. I wish that moving the Six Nations would solve all this, but you cannot say that.”

The latest guidance on when fans might return to stadiums varies across the six countries, but rugby union authorities in England were told last week that fans may not to be able to return until the end of March.

Four outstanding fixtures from the 2020 Six Nations are scheduled to be played this month after they were cancelled at the start of the Covid-19 outbreak.

Those will be behind closed doors, as will the Autumn Nations Cup – a new eight-team tournament that replaces the Autumn Tests.

Speaking on Tuesday, Wales coach Wayne Pivac said: “Who knows when the next Six Nations will be played? I think discussions are ongoing, and that’s the smart thing to be doing.

“Obviously, we are in a position now with no crowds – or very little crowds – and most unions will be in the same boat.

“They will be desperate not only for the tournament to go ahead, but also to make sure that there are crowds in the future so that we can meet our financial obligations to the game.” 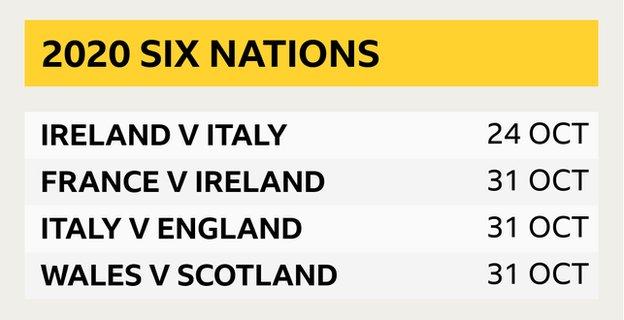 ‘This is fraught with complexity’ – analysis

It’s fair to say this news wasn’t meant to get out this early in the process. The respective nations are still putting their heads together about what a delay might look like, but they’re definitely considering it.

In many ways, they have no option. They all need capacity Six Nations crowds and the multi-millions of pounds in revenues that full houses would bring. In order to avoid financial meltdown they have to explore any and every opportunity to move the championship to a time when crowds are more likely. Even that is a guessing game, though.

This thing is fraught with complexity. How far back do they move the championship? A month? Well, that clashes with the club season in all countries and the English and French clubs will be up in arms over it. There’d be a battle to fight on that front.

The clubs also won’t, as it stands, have to release their Test players if the Six Nations is moved outside of its normal window, so what kind of competition would you be getting?

How about later in the season, to the summer? No. It’s Lions year. How about the autumn? No again. There are already Tests in place for November. Nothing about this is easy.

Coronavirus: UK recording more daily cases per capita than the US

Tuchel took charge of Wednesday's draw with WolvesChelsea manager Thomas Tuchel hopes the club and their...