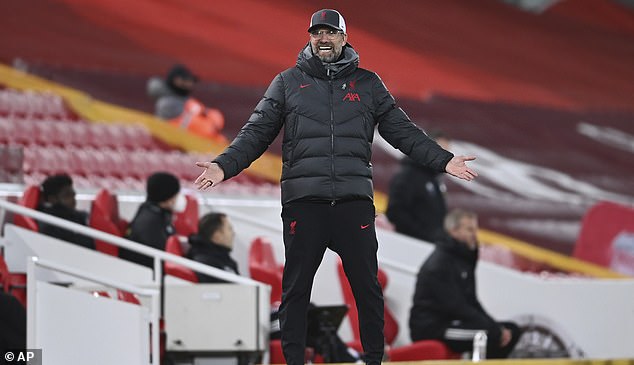 Klopp blasted Sky and BT Sports in his post-match interview, urging the broadcasters to allow players more time to recover between games.

His side were missing a number of key players going into the game due to injury, including Virgil van Dijk, Joe Gomez, Jordan Henderson and Trent Alexander-Arnold.

Jurgen Klopp on injuries and the broadcasting schedule.

This part of his interview wasn’t aired by Sky, probably because he was speaking absolute facts.

They suffered another blow during the match when they were forced to replace Naby Keita who sustained a hamstring injury.

In his post-match interview with Sky Sports’ Geoff Shreeves, Klopp accused the broadcasters of not caring about player welfare and urged them to find a solution to the tight schedule which has been created as a result of the coronavirus pandemic.

Klopp said: ‘It was never about us when I spoke about it. It’s about all the players, England players, players who play next summer in the European Championships.

‘But I know you (the broadcasters) don’t care and that’s the problem.’

Shreeves rebutted Klopp that it’s wrong to say that but the German fired back: ‘No it’s not wrong to say it because we’ve discussed it for a long time already and nothing’s happened.

‘I’m happy about the game but we lost another midfielder (Keita). Also on the bench we don’t have a lot but that’s the situation.

‘But it’s not about us I don’t talk about Liverpool, I talk about all the football players out there. Yesterday, (Gerard) Pique massive knee injury. (Bukayo) Saka, maybe, I’m not sure, looked like a knee injury – he played all three games for England during the international break.

‘It’s a massive problem. Wednesday and Saturday 12:30 is a broadcaster problem and nothing else. We play against Atalanta on Wednesday and then 12:30 (Saturday) against Brighton. It’s an early Christmas present. We will show up there shaking. I think about sending the points. That’s how it is.

‘Gentlemen, start talking and start making decisions. I know it’s not you. I like the relationship with you.’

Shreeves looked to make note of the fact that clubs agreed to a deal with the broadcasters but was interrupted by the Liverpool boss.

Klopp said: ‘If someone tells me again about contracts I’ll go really nuts. Because these contracts aren’t made for a Covid season.

‘That’s the situation so everything’s changed but the contract with the broadcasters is still: ‘We have this, so we keep this’. What? Everything changed, the whole world changed!’

Jurgen Klopp’s side went second in the table with their victory thanks to an own-goal by Jonny Evans and headers from Diogo Jota and Roberto Firmino.

Managers including Klopp and Manchester City adversary Pep Guardiola have also spoken about the need to re-introduce five substitutes per game due to the packed schedule to give players more of a rest.

This notion has been questioned by others including Burnley boss Sean Dyche and Sheffield United’s Chris Wilder, as they feel it would favour the big clubs.

‘Balotelli to Barnsley? Now that is one Mario story I don’t believe’

'Balotelli to Barnsley? Now that is one Mario story I don't believe'