A Sky Sports presenter has revealed how he narrowly avoided being crushed by a huge tree after it fell through the roof of his car.

Keith Downie said he had been left ‘badly shaken but still alive’ after the ancient oak crashed through his BMW’s windscreen yesterday.

The channel’s North East reporter shared shocking photographs on social media showing a bough stuck in the vehicle as well as extensive damage to the interior.

It comes as Storm Malik wreaked havoc across the country, leaving a nine-year-old boy and a 60-year-old woman dead due to falling trees caused by strong winds.

Staffordshire Police said a man is also in hospital after the incident which killed the boy, while the woman died in Aberdeen.

It comes as many across Scotland could be without power for the rest of the weekend as the impact of another storm due to hit on Sunday could be worse than anticipated. 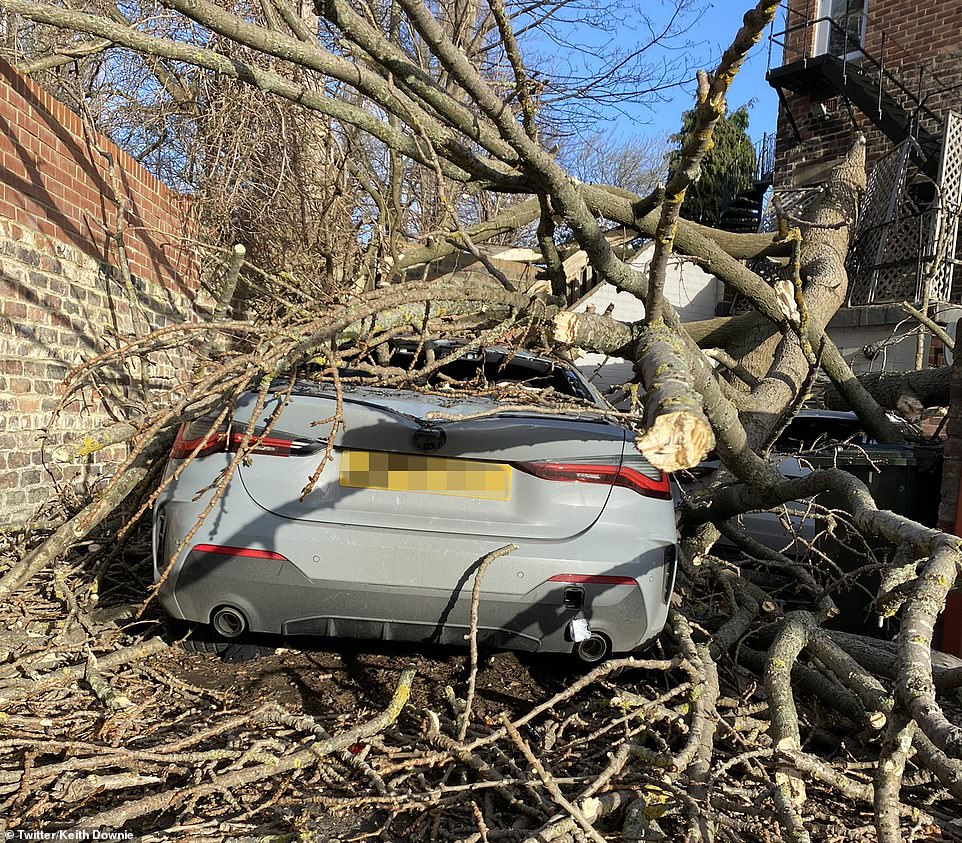 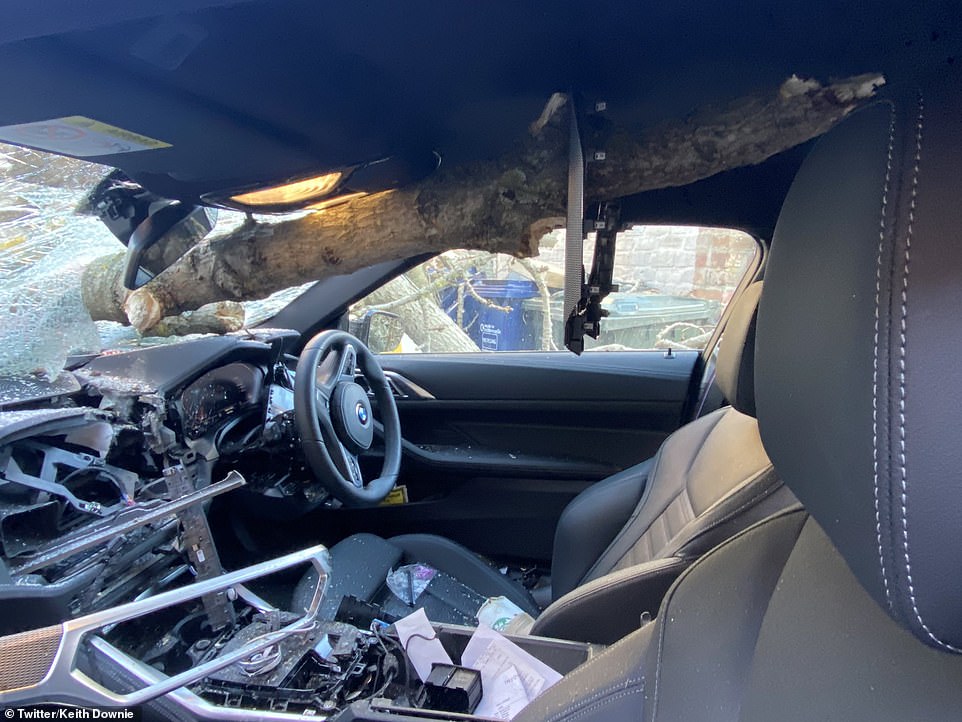 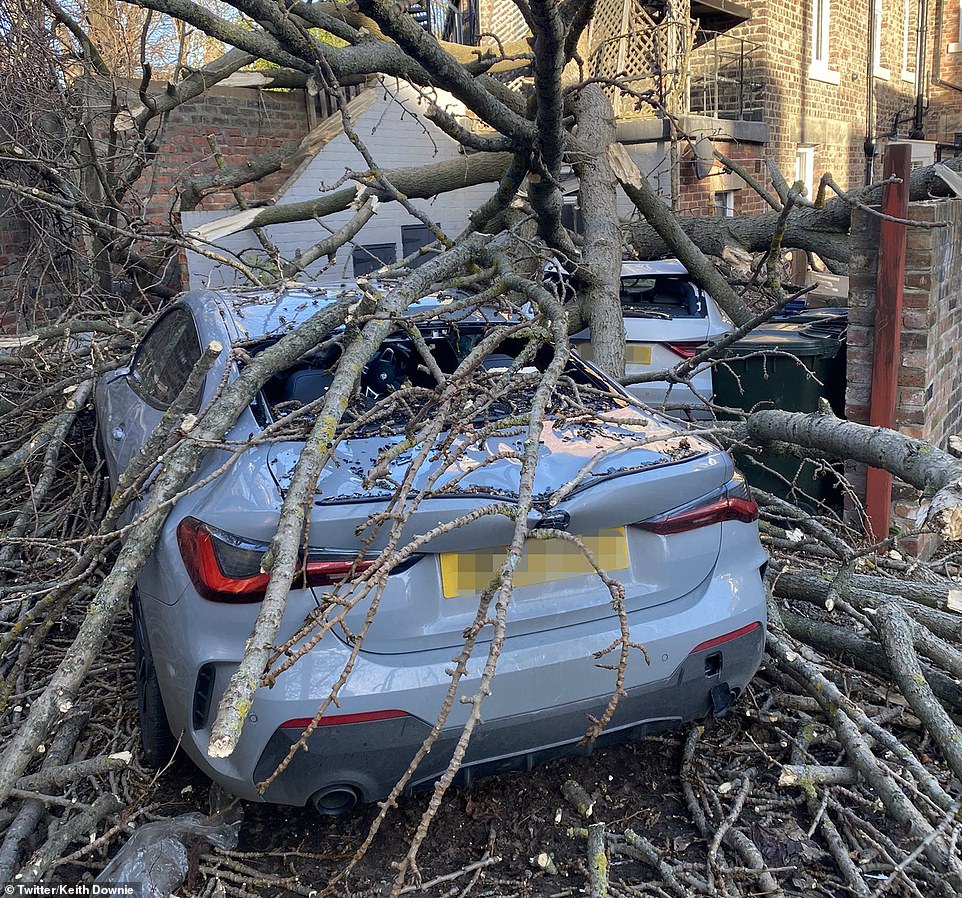 Downie, who is from Glasgow but lives in Newcastle, said he was thankful to have escaped his BMW – which appeared to be a 4 Series Coupé worth £40,000 – without getting injured 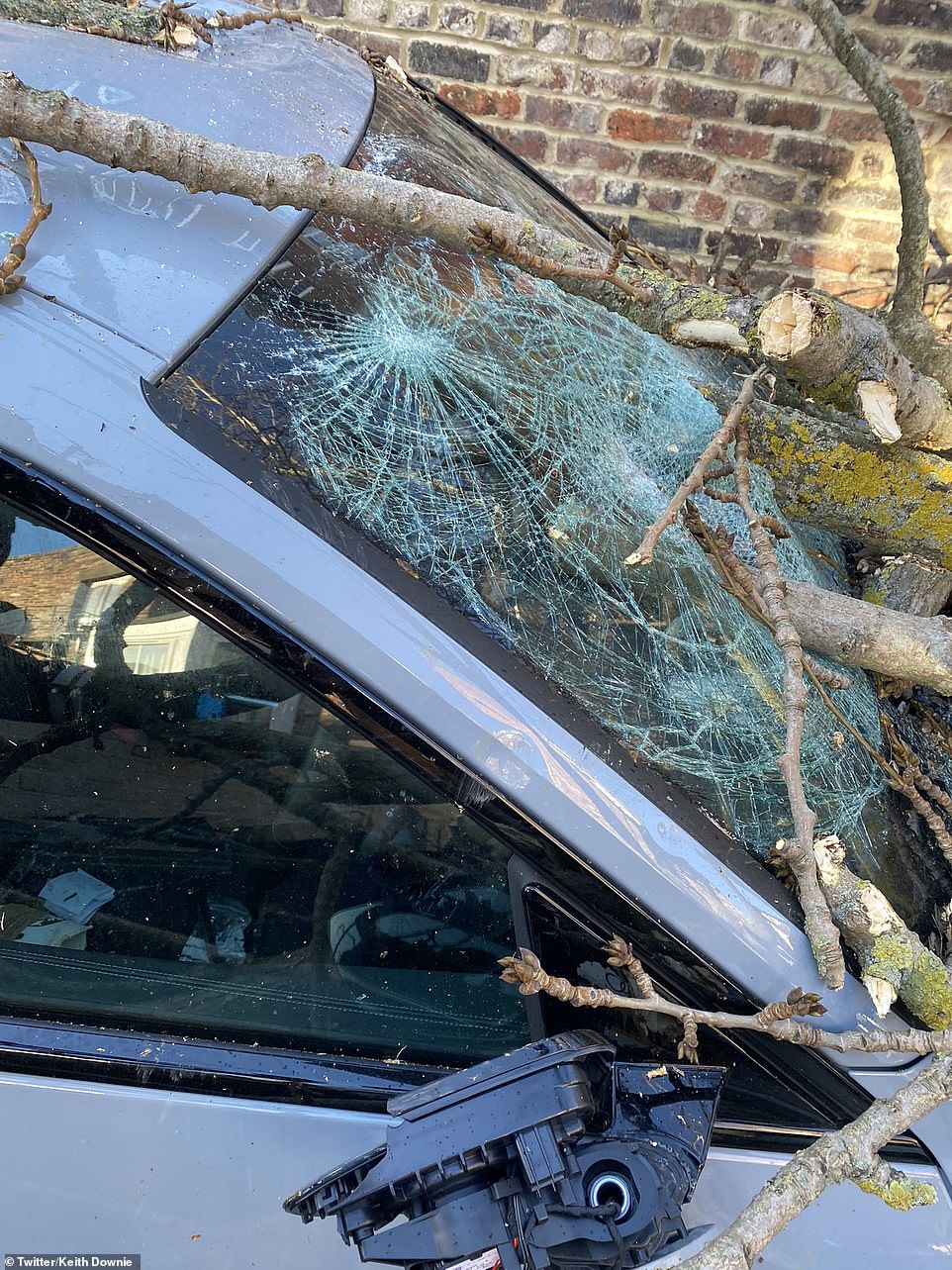 He tweeted: ‘How’s everyone’s Saturday? Thankfully I’m safe but things could’ve been a lot worse.’ He later added on Instagram: ‘Badly shaken today but still alive. Poor car only lasted three months… but it can be replaced’ 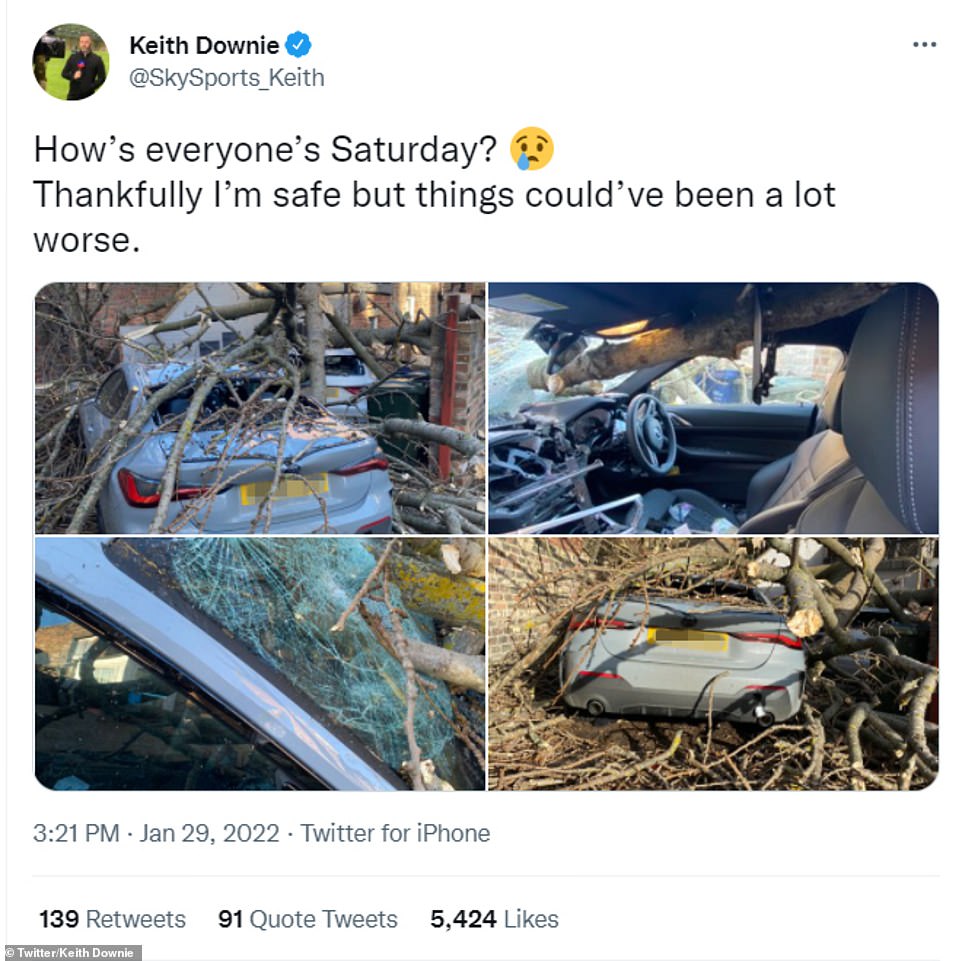 Downie, who is from Glasgow but lives in Newcastle, said he was thankful to have escaped his BMW – which appeared to be a 4 Series Coupé worth £40,000 – without getting injured. 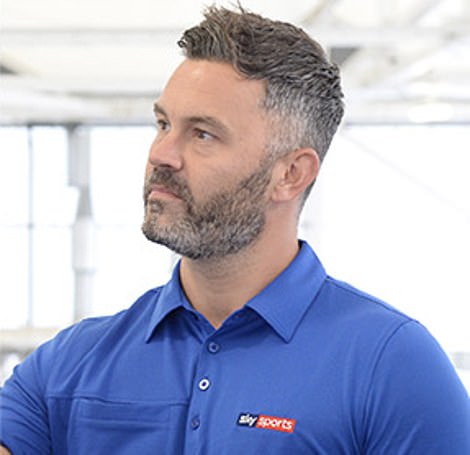 Pictured: Downie, whose car was smashed by a falling tree in Newcastle

He tweeted: ‘How’s everyone’s Saturday? Thankfully I’m safe but things could’ve been a lot worse.’ He later added on Instagram: ‘Badly shaken today but still alive. Poor car only lasted three months… but it can be replaced.’

Meanwhile Police were called to Winnothdale, near to Tean, at 1pm on Saturday after reports a tree had fallen on a boy and a man, and they were both taken to the Royal Stoke University Hospital.

A spokesman said: ‘Sadly, despite the best efforts of medical staff, a nine-year-old boy passed away. The boy’s family are being supported by specially-trained officers. The man remains in hospital.

‘A scene remains at the location, where people are asked to avoid the area. The death is not being treated as suspicious and a file will be prepared for the coroner.’

The boy’s death comes after a 60-year-old woman was killed by a falling tree in Aberdeen as strong winds from Storm Malik battered northern parts of the UK.

Police Scotland said emergency services were called to Deveron Road in Aberdeen on Saturday at around 10.30am to reports of a sudden death of a 60-year-old woman. 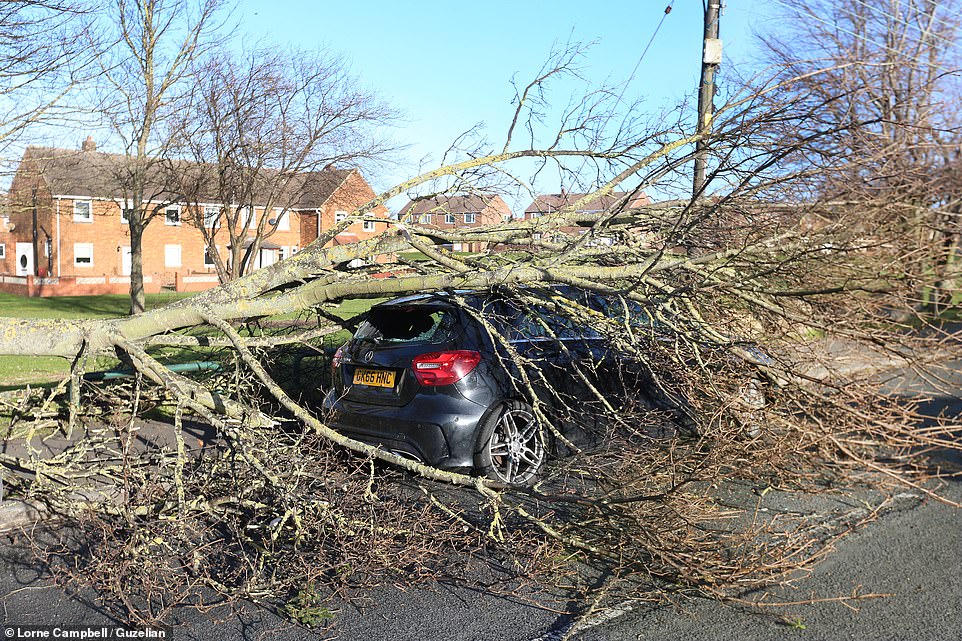 The Met Office has issued a ‘danger to life’ warning as gusts of up to 80mph could batter northern areas of the UK this weekend as Storm Malik sweeps in. Pictured: A fallen tree on top of a car in West Ralnton, near Durham yesterday morning 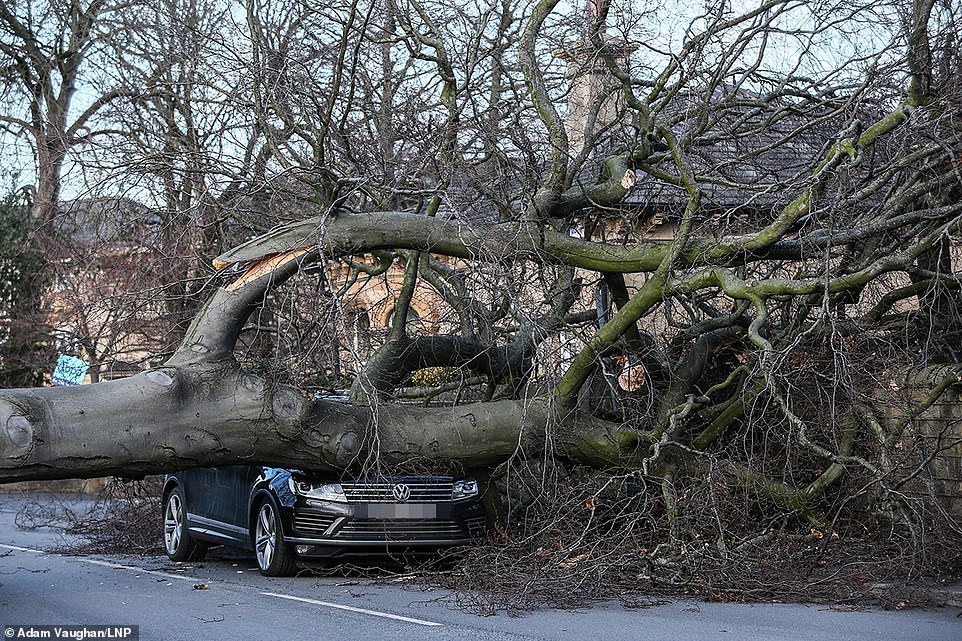 A spokesman said: ‘There are no suspicious circumstances. A report will now be sent to the Procurator Fiscal.’ Winds of more than 100mph were reported in Scotland, with widespread disruption to travel and power supplies.

Weather warnings were in place across all of Scotland, northern England and parts of Northern Ireland for most of Saturday due to the high winds and rain.

The Met Office have said that another blast of severe strong winds, now officially named Storm Corrie, is set to hit parts of the UK.

It is set to move eastwards across Scotland on Sunday and push across the North Sea in the early hours of Monday.

The Met Office has issued an amber weather warning for wind across northern parts of Scotland from Sunday into Monday morning.

‘This follows just one day after Storm Malik moves though also bringing a spell of very strong winds. Storm Corrie will bring gusts of up to 90mph in exposed coastal locations in northern Scotland, with 70-80mph gusts more widely in the north.’ 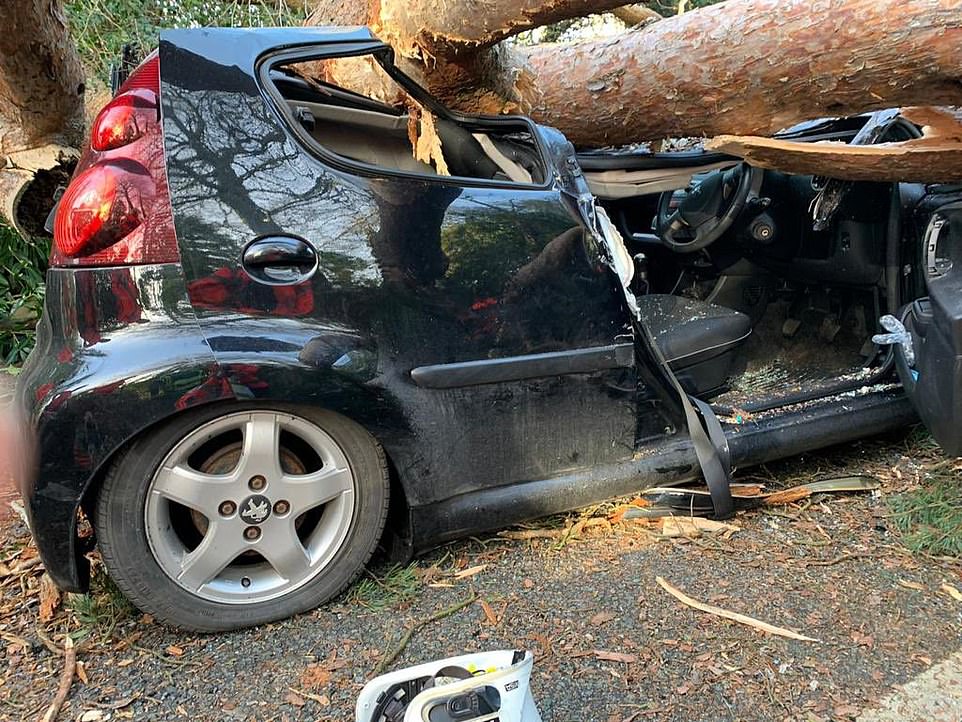 Elsewhere, a woman was also rescued from her Peugeot in Altrincham, Greater Manchester, after she became trapped inside when her vehicle was crushed by a huge falling tree yesterday 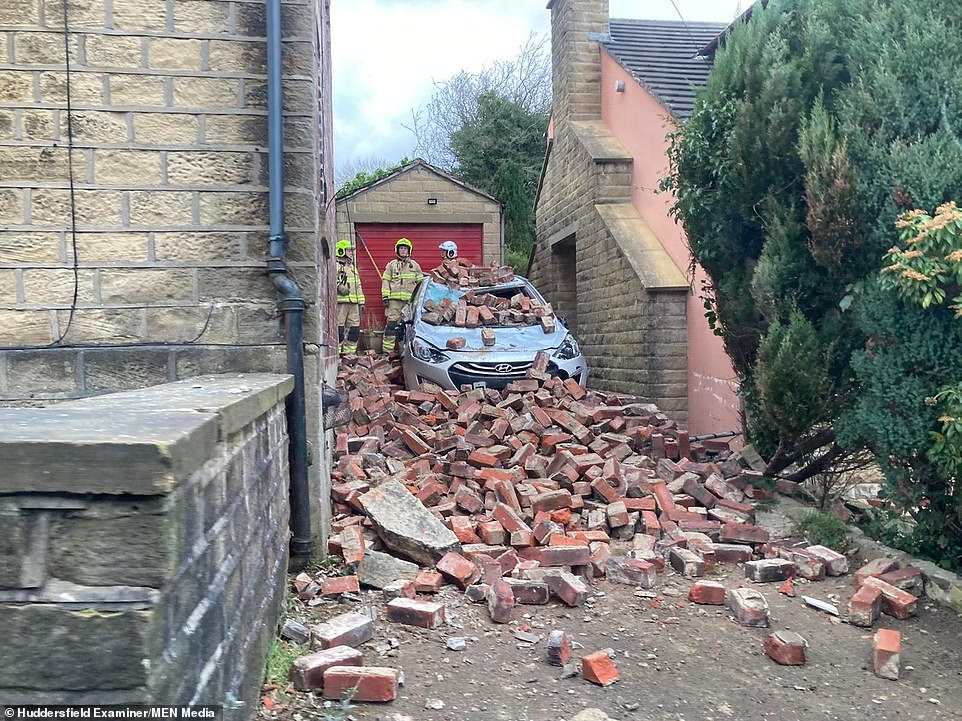 Dramatic pictures show a car crushed beneath hundreds of bricks, which fell from a residential property in Slaithwaite as Storm Malik battered West Yorkshire yesterday

Scotland’s First Minister Nicola Sturgeon described the impact of Storm Malik as ‘severe’. She warned once Malik subsides Storm Corrie may be more severe’ than first anticipated in parts of the north and north-east of Scotland.

Ms Sturgeon also said in a statement on Twitter that some Scots could be without power over the weekend. As of 10pm Saturday, SSEN said 23,000 households were without power, with the agency moving to ‘red alert’ status.

A major incident was declared in County Durham on Saturday to deal with the devastation caused by Storm Malik.

On Saturday power supplies and mobile phone coverage were affected. Northern Powergrid said the storm had caused disruption and its teams were restoring power through alternative routes on its network ‘where possible, assessing damage and co-ordinating repairs wherever conditions permit’.

It said customers should keep a battery or wind-up torch to hand and keep mobile phones fully charged, and people should also beware of fallen power lines.

Network Rail said fallen trees had caused numerous services to be cancelled, including Inverness to Thurso, Perth to Aberdeen, Aberdeen to Dundee and Glasgow Queen Street to Oban. 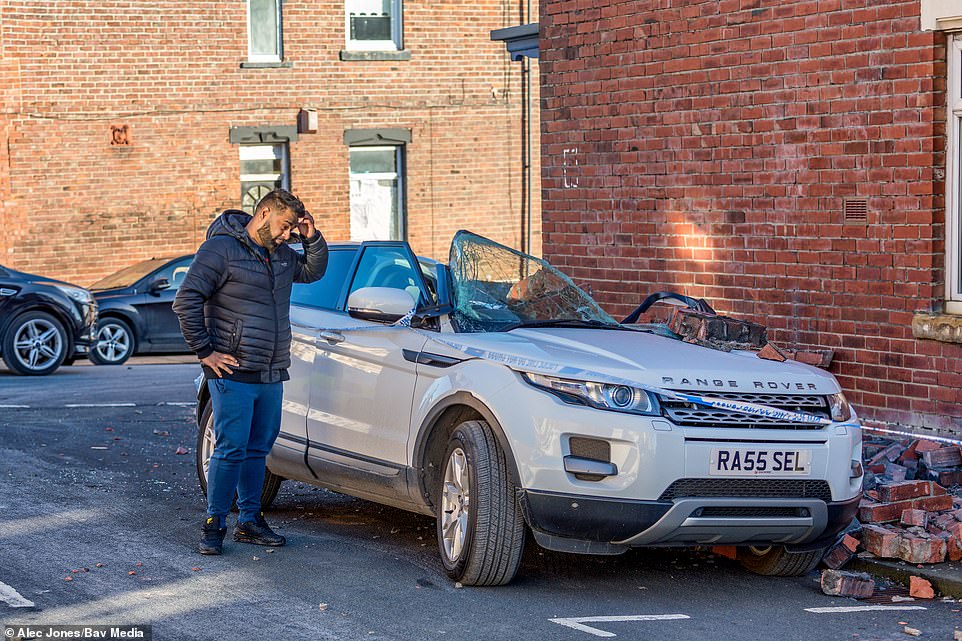 A Russel Choudary, 40, looks on at the remains of his £25,000 Range Rover in South Shields, Tyneside after debris collapsed on top of the vehicle following strong winds brought by Storm Malik yesterday 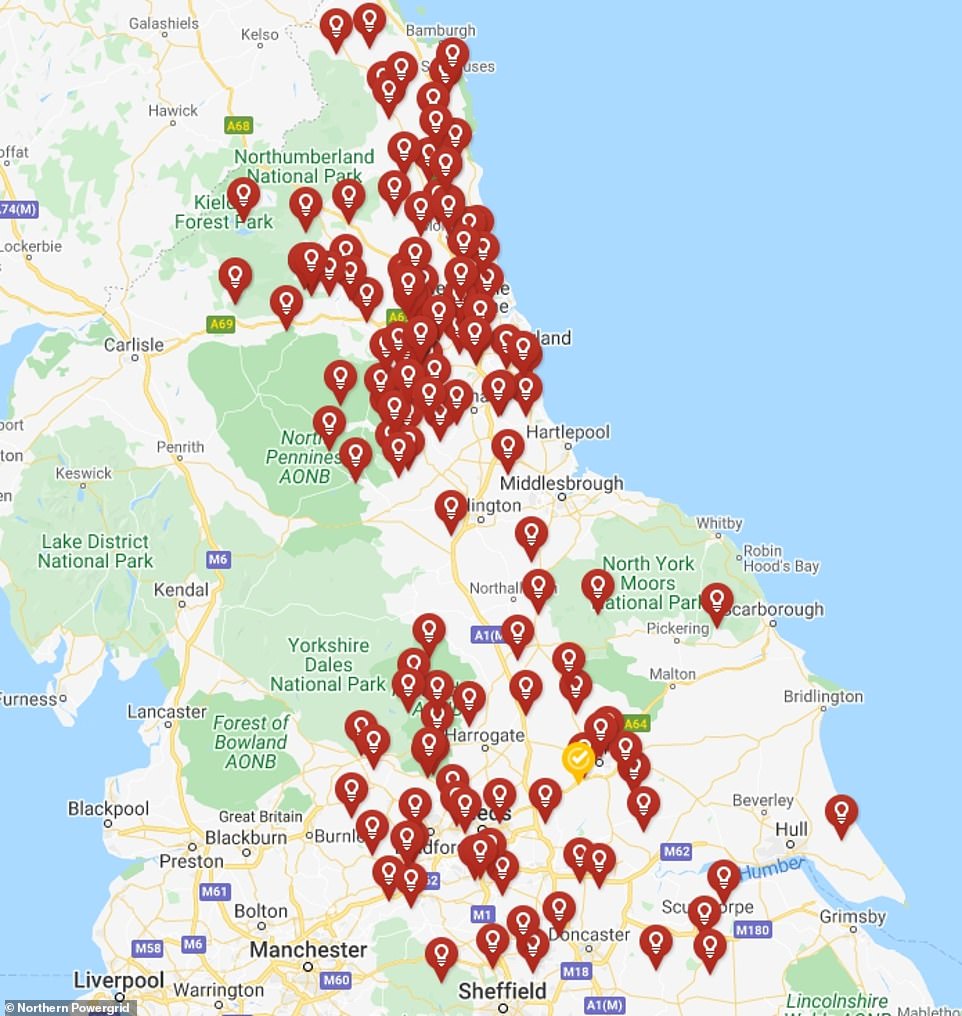 More than 60,000 homes have already suffered some form of loss of power on Saturday, according to Northern Powergrid. Its live update map (pictured) also appeared to crash at points throughout the day due to a surge in online traffic

Two Scottish Premiership games were postponed, with matches between Aberdeen and St Johnstone and Dundee and St Mirren called off due to safety concerns around the stadiums.

A statement on Aberdeen’s website read: ‘We have been working closely with emergency services and the SPFL throughout the morning, closely monitoring the situation in the hope that conditions might improve to allow the game to be staged, but ultimately the safety of supporters, players and staff is our paramount concern and we would ask everyone to continue to adhere to the guidance being given by Police Scotland.’

The Scottish Premiership confirmed that Dundee’s game at Dens Park was off due to high winds.

The Championship game between Arbroath and Partick Thistle was also cancelled with no new dates set for the games.

Residents in the west end of Glasgow were also evacuated from there homes over fears the high winds had exacerbated existing structural issues with the towers of Old Trinity College.

A spokesman for Glasgow City Council told the PA news agency that it would likely be ‘considerably longer than 24 hours’ before residents could return home.

Residents in the west end of Glasgow were also evacuated from there homes over fears the high winds had exacerbated existing structural issues with the towers of Old Trinity College.