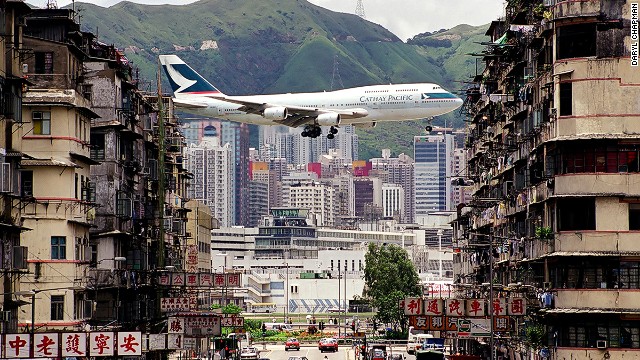 Prior to the Kowloon-based airport’s closure in 1997 — it was replaced by the current Hong Kong International Airport — buildings constructed in the area had to adhere to strict height restrictions to ensure the safety of the facility.

That’s what makes this new skyscraper all the more exciting. Standing at 200 meters above ground, when completed in 2022 Airside will become the tallest landmark occupying the old airport land.

As well as breathing new life into a part of Hong Kong that has been largely undeveloped since the airport’s closure, it will no doubt stir some nostalgia for the days when gigantic airplanes would be photographed descending through the city’s residential tower blocks.

While a shiny new building isn’t likely to draw comparisons to the gray boxy structure of Kai Tak’s terminal, the team behind it say they took note of the airport’s vertiginous landing descent when considering their design and wanted to pay homage to its dramatic aviation heritage.

The project, with an investment of HKD 32 billion ($4.12 billion) will comprise an office building and a retail complex under the concept of “wholeness.”

“Whilst respecting the historical context of the site, our initial concepts for the development took inspiration in the diversity of commercial, recreational and retail functions and the opportunity this gave to generate a series of rich and interactive public spaces throughout the development,” Robert Greenwood, Snøhetta’s managing director in Asia, tells CNN Travel.

“This approach led us to a hybrid solution for the tower — no longer the traditional tower and podium but a composition of elements combining to form a holistic urban structure, connecting the ground to the sky.”

The complex features a balanced range of activities and infrastructure including office space, a retail complex, art and dining offerings, along with plenty of greenery and outdoor space.

Nan Fung Development Limited’s Airside will be the tallest skyscraper in the Kai Tak area.

A cascading, green open-air rooftop and terraces will take up about a third of the site area. The multi-story 700,000-square-feet shopping mall will offer an experiential retail space and world-class restaurants, says the developer.

Sustainability plays a major role in the design, too.

There will be a sky farm, natural ventilation, an automated smart waste sorting and storage system and a water-saving and rainwater retention management plan. It’ll also be home to the city’s first automatic bicycle parking bay.

A nod to Kai Tak Airport and Hong Kong’s past

A large area of the complex will be covered by glass panels, allowing natural daylight to flood the space.

The different design elements of the complex pay tribute to the site’s aviation past.

“During our research we were impressed by the images of the dramatic landings that took place at the former Kai Tak airport,” says Greenwood.

“In the design process, it was important to us to be respectful of and contribute to the preservation of the collective memory of many Hongkongers. The vast retail arcade space at Airside draws parallels to the typology of the airport terminal through its impressive scale and openness.”

The structure is filled with natural daylight whereas the exterior plazas and public rooftop gardens offer views over the city — “much like the visual impressions from the famous takeoff and landing experiences of the original airport.”

Nan Fung Development Limited, the local developer of the project and one of the largest privately-held conglomerates in Hong Kong, also loaned inspiration to the design.

Founded in the 1950s, it was the city’s largest yarn-spinning business. As a nod to this history, Snøhetta has blended in designs that acknowledge the company’s role in Hong Kong’s textile manufacturing as well as the city’s industrial past.

“[Some] examples of textile references are the weaved office lobby chandelier wrapping around the office lobby stone pleats, the fluted glass façade, whose panels in different radii are organized in a stylized drapery, or the stone pavers of the public plazas whose different tones form a crest like pattern that invites its users inside,” says Greenwood.

Spanning 1.9 million square feet, the skyscraper will be one of the latest landmarks of the Kai Tak Redevelopment projects — a plan to transform the former airport site into one of the biggest and the newest central business districts in Hong Kong.

Airside will be located next to the new Kai Tak MTR metro station — where the former North Apron of the old airport was located.

Other highlights in the area include the Norman Foster-designed Kai Tak Cuisine Terminal and its rooftop park (already opened and in use), public facilities, residential buildings and commercial areas.