It may look cute and shine a cool fluorescent orange, but a newly-identified species of frog in Brazil is highly poisonous, scientists reveal.

The frog, called Brachycephalus rotenbergae, is just under an inch in length but has enough poison, transmitted from glands in its skin, to make a human ill.

It also has bony plates on its skull and back that glow green through the skin under ultraviolet (UV) light – but researchers aren’t sure why.

B. rotenbergae was discovered south of the Mantiqueira mountain range in the state of São Paulo, Brazil, in forest along Brazil’s Atlantic coast. 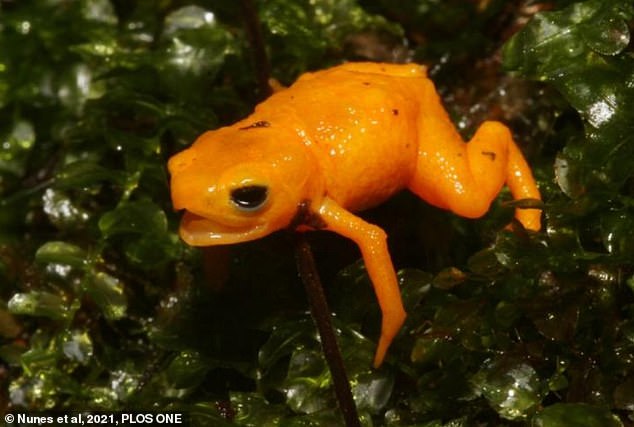 It’s a type of pumpkin toadlet (Brachycephalus ephippium), which is a group of related species of fluorescent, brightly-coloured frogs, similar in shade to the squash that gives it its name.

The newly identified species is poisonous and potentially fatal to small mammals and birds – but their threat to humans is minimal, according to study author Ivan Nunes at Universidade Estadual Paulista.

Humans can touch them with their bare hands, but shouldn’t touch their eyes or mouth afterwards for risk of illness. 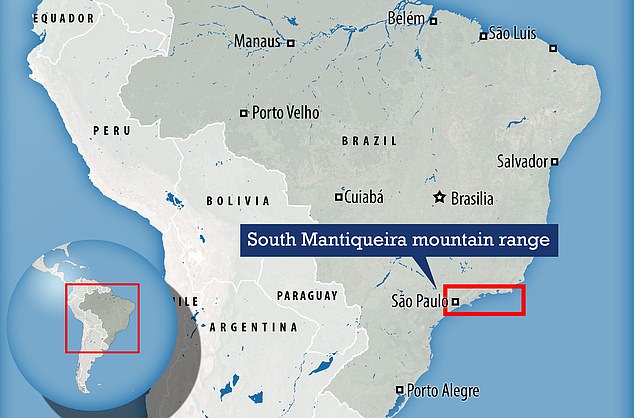 The species B. rotenbergae was discovered south of the Mantiqueira mountain range in the state of São Paulo, Brazil, in forest along Brazil’s Atlantic coast

‘The species is very poisonous, but only for the animals that try to eat them,’ Nunes told MailOnline.

‘Predators (birds, mammals, bigger frogs) can die if they eat the Brachycephalus.

‘We can manipulate them with our bare hands, without gloves, no problem with that – we just cannot touch the eyes or mouth after that.

‘If we do that, we can feel a little bit bad [but] washing the hands can solve the problem.’

Other frogs in the same genus carry an extremely dangerous poison in their skins called tetrodotoxins, and it’s likely B. rotenbergae does as well. 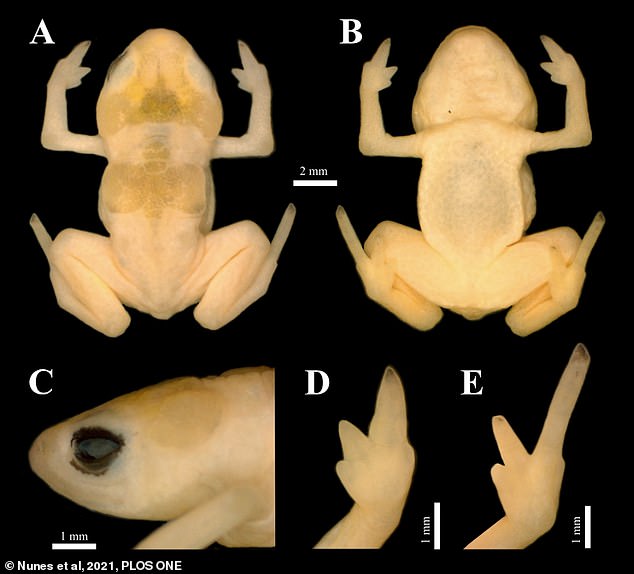 Tetrodotoxins interfere with the signals transmitted between nerves and muscles, causing the muscles to become paralysed.

They’re also found in the deadly Fugu pufferfish, which is famous for being specially prepared in Japanese restaurants for consumption so it’s no longer deadly.

B. rotenbergae spends most of its time in the forest floor, and was photographed by the researchers crouching between branches.

It’s possible that the ultra-bright appearance acts as a warning for predators that they carry poison, but it also might have evolved so potential mates can find each other in dim light.

Or, their appearance could simply be used as an effective camouflage, the study authors suggest.

‘There are great amounts of tiny yellow and orange leaves, mushrooms and seeds on the ground, especially during the active season,’ they point out. 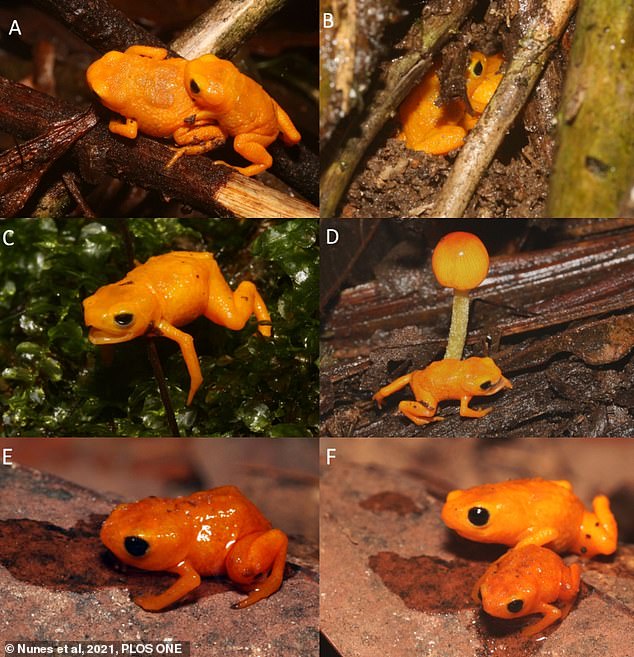 (A) A male clasps a female around her waist using his forelimbs; (B) An couple hiding under a juçara palm; (C) Mouth gaping defensive behaviour; (D) One specimen near a yellow/orange mushroom (notice the similarity of colour and size); (E) One juvenile specimen; (F) Two juvenile specimens, but the smaller one is darker

The researchers say B. rotenbergae can distinguished from other pumpkin toadlets by its morphological characters (especially structure of bones and head shape), vocal call and DNA gene sequences.

But they still aren’t too sure why it emits such an impressive fluorescent glow under UV light, however.

‘There’s an idea that fluorescence acts as signals for potential mates, to signal to rival males or some other biological role,’ Nunes told Smithsonian. 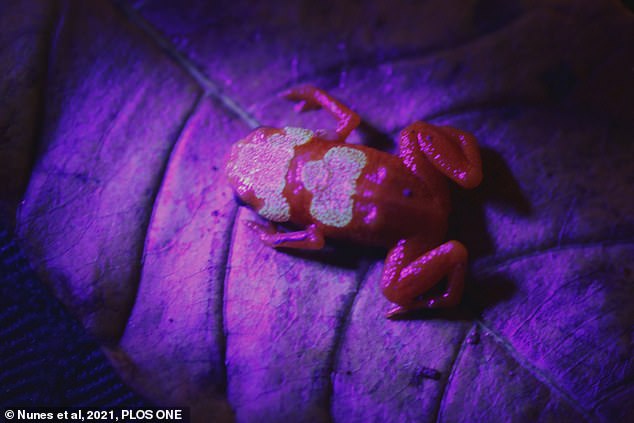 The species has bony plates on its skull and back that glow green through the skin under UV light. Pictured here under 395 nm wavelength (UV, below visible range)

They team collected 276 pumpkin toadlet specimens (helped in part by the use of fluorescent light), which they took back to their lab for analysis, including DNA tests.

The analysis revealed the some of the frogs had distinct new characteristics, including faded dark spots on the skull and a rounded snout that were unlike the other species they collected.

This heralded the discovery of a new species, which they named B. rotenbergae after a Brazilian conservationist called Elise Laura K. Rotenberg.

Rotenberg is a founder of the Brazilian NGO Projeto Danis, a project that works to conserve forest where the toadlets live.

The species is detailed further in PLOS One.

WHY YOU SHOULDN’T LICK A FROG

There are a number of toxins in frog and toad skin, which are thought to protect them against predators.

In the genus Atelopus, most of these chemicals are tetrodototoxins – a potent neurotoxin.

According to the CDC, tetrodototoxins interfere with the signals transmitted between the nerves and muscles, causing the muscles to become paralyzed.

As this applies to the respiratory tract as well, being poisoned with this toxin can lead to respiratory arrest and, ultimately, death.

Some forms of zetekitoxin are known to be powerful cardiotoxins, having drastic effects on the heart, and scientists have found chiriquitoxins to be a natural analog of tetrodotoxin.

While these toxins could be harnessed for treatments, they can also be deadly.

‘The mechanism of action is to reduce cardiac rhythm, making these interesting candidates as therapeutic compounds.’