So much for DRY January! Alcohol sales soar during first month of 2021


So much for DRY January! Alcohol sales soar during first month of 2021 as locked-down Britons reach for the bottle amid winter and Covid blues

Britons have put Dry January on hold as alcohol sales rocketed at the start of the third national lockdown.

Waitrose beer sales were up 49% and wine sales by 27% over the week following the imposition of restrictions on January 6.

It came as separate YouGov figures found a third of people who had attempted to stay off the booze this month had already given up in the first week.

Overall, 8% of Britons are taking part in the month-long abstinence, but of those who planned to do so 28% have already had a tipple.

How many Britons planned to do Dry January this year…

Out of people who planned to do Dry January this year, with the questions asked on January 6. Sample of 1672 British adults:

At Waitrose, increased sales of spirits suggest people are trying out home-made cocktails with liqueur sales up 75%, followed by gin (+30%), white rum (+64%) and tequila (+56%).

Meanwhile, nostalgia has also taken centre stage with sales of cream liqueurs up 101% – with the figures covering online and in-store.

Despite booze sales rising, the rest of the retail sector is suffering, with footfall dropping by 10% week on week as the impact of the third lockdown continues to bite.

It comes as a separate study revealed that young middle-class women are the most likely to turn to drink to cope with lockdown.

A quarter of all drinkers increased their alcohol intake after stay-at-home rules were imposed last spring.

Most of these were younger educated women on above-average salaries.

Researchers suggest women may be more vulnerable to lockdown anxieties over money and jobs, and may also face an added burden of looking after children and home schooling.

The University College London survey of 30,000 people, taken during the first fortnight of the first lockdown, follows widespread concern that boredom, loneliness, worries about family and friends, and difficulties with work and money led to a major increase in drinking. 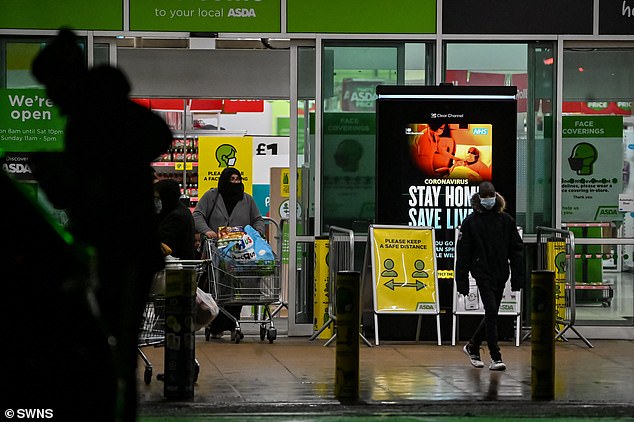 A third of those surveyed did not drink during lockdown but researchers say those who drank more last year are likely to have increased their alcohol use again during the current lockdown.

… And how many are struggling to stay off the bottle

Out of the above group who said they planned to do Dry January:

Not consumed any alcohol – 72%

Have consumed alcohol but plan to cut down – 20%

The study said: ‘Younger women with post-16 educational qualifications and a household income over £30,000 were more likely to report increased alcohol consumption.’

It also indicated that ‘having an anxiety disorder, being stressed about finances or about catching or becoming seriously ill from Covid-19 were factors associated with increased alcohol consumption.’

Dr Claire Garnett of the UCL Institute of Epidemiology and Health Care said: ‘Despite women being more likely than men to report drinking more than usual during lockdown, heaviness of drinking is still positively associated with being male, which was the case before lockdown.

‘Women might be more likely to drink more than usual during lockdown because they have been more negatively affected by the pandemic through increased gender inequalities as women are more likely to lose their jobs and carry the burdens of increased childcare and housework,’ she added.

The report said: ‘Drinking less than usual was independently associated with being younger, male, black or ethnic minority, having a household income lower than £30,000, having been diagnosed with or suspected to have Covid-19, taking on COVID-19, being stressed about becoming seriously ill from Covid-19, and not being a key worker.’

Dr Richard Piper, Chief Executive of Alcohol Change UK, said: ‘We saw a jump in alcohol sales following the announcement of the first lockdown so it’s not surprising that some supermarkets are reporting rises again.

‘But this doesn’t mean that people have given up on Dry January. What we’re actually seeing at Alcohol Change UK is a jump in the number of people coming to our website to download the free Try Dry app and sign up for our daily Dry January emails.’

The latest Springboard figures for retail footfall, released today, showed the number of visits to UK shops has dropped by 10% week on week.

As the third lockdown came into force on Wednesday last week, this meant there were two days where people could still visit non-essential shops in the parts of England where they were still open.

The seven days to January 9 saw footfall tumble by 27.1 per cent compared to the previous week. 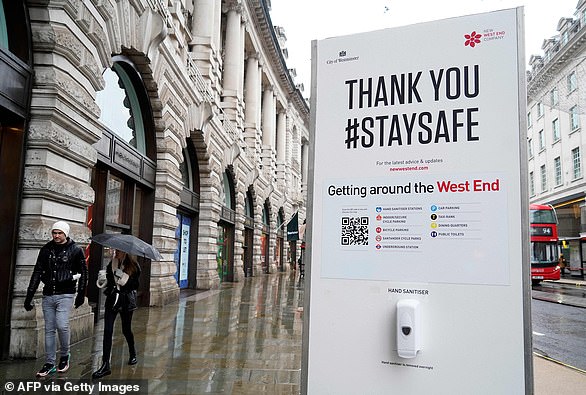 However, in the South East and Greater London, which have the highest infection rates, footfall only declined by 8 per cent and 10.7 per cent respectively.

However, in London this was driven by Outer London areas where the drop in footfall was only 6.8% versus 25.9% in Central London.

Despite this, the drop in footfall in Central London was still noticeably less than in regional cities outside of the capital where footfall declined by 39.6 per cent.

Brit Brother is watching you: Number of CCTV cameras in the UK soars to 5.2million