A solicitor who was shot through the heart at point blank range outside Sheffield United’s Bramhall Lane football stadium was ‘lured’ to his death by his killers, a court has heard.

Khuram Javed, 30, died after being shot three times and stabbed in the back in an alleyway on April 10 last year.

Tinashe Kampira, 20, Atif Mohammed, 20, and a third man, who cannot be named for legal reasons, deny murder and possessing a firearm with intent to endanger life at Sheffield Crown Court.

Craig Hassell QC, prosecuting, told the court that the three accused had lured Mr Javed and four of his own friends to Countess Road.

The prosecutor said Mr Javed had spent the evening socialising with friends at a flat, while the three defendants had been seen on CCTV in the local area.

After Mr Javed left with three friends, another friend became concerned about the ‘loitering’ defendants at a nearby car park, so the group returned to the flat, jurors were told.

Mr Javed and his friends subsequently followed the defendants, before two witnesses say they saw three men running down the road followed by a group of five males.

They then heard gunshots.

Mr Hassall said one of the three defendants tripped while running and the unnamed 19-year-old then turned and fired towards Mr Javed and his friends. 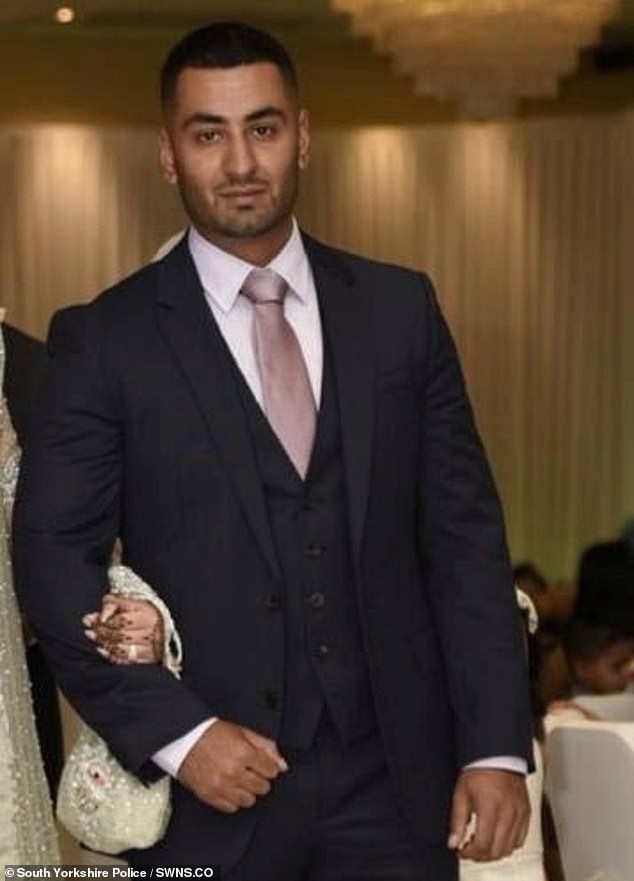 Khuram Javed, 30, died after being shot three times and stabbed in an alleyway near Bramhall Lane stadium on April 10 last year

The prosecutor said: ‘The prosecution says that Khuram Javed and his friends were lured to the scene of the shooting.

‘One of them penetrated his heart and lungs. A post-mortem examination revealed he had also been stabbed in the back causing a wound.

‘One of the shots hit a friend of Mr Javed’s, causing a relatively minor injury to his foot.

‘Each of the surviving members of that group describes trying to get out of the way – sheltering at the side of the footpath.’

Mr Javed was pronounced dead at the scene at 10.09pm.

Jurors heard that Sohidul Mohamed, 24, and Saydul Mohamed, 22, then drove the 19-year-old murder accused to a safe house in Reading, Berkshire, the next day.

Both men deny assisting an offender.

Mr Hassall told jurors that while the reason for the shooting may never be revealed, that would not be something they have to consider.

Mr Javed and his friends would often socialise at the block of apartments at Anchor Point in Cherry Street, with several of them contributing to the rent of the premises.

The three men were captured on CCTV around the building at 4pm and again between 7.15pm and 8.45pm, the court was told.

One of Mr Javed’s friends went to his car, but felt ‘uneasy’ about the presence of the 19-year-old defendant.

Mr Javed’s group had planned to travel to Bradford together that evening, but instead followed the three defendants after leaving the flat together. 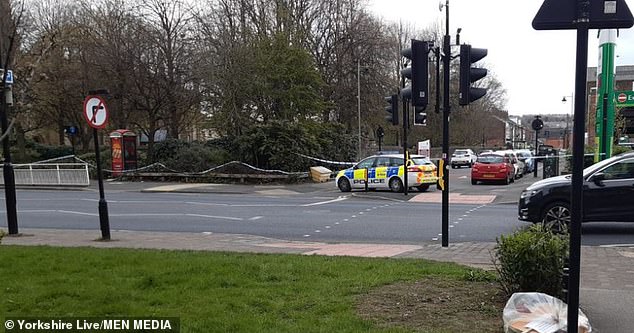 A dog walker noticed a group of three males followed by another group of five males, the court heard.

The witness then multiple loud bangs, which he realised were gunshots.

Mr Hassall told the court that, once the shooting had stopped, the Mr Javed’s fleeing friends realised he was ‘lying face down on the footpath’ and appeared to ‘already be unconscious’.

A firearms expert analysed an unfired cartridge and found the weapon was a converted blank with a ball bearing inserted into the top of the casing.

One passed through Mr Javed’s thigh, one through the upper right part of his back and into the neck, and the final fatal shot was fired at point blank range into Mr Javed’s upper right arm through his chest, right lung, heart, left lung.

There was also a 9.5cm stab wound to his back, the court heard.

The court heard that three figures were seen entering an underpass after the shooting and a taxi had been booked from Kimpara’s phone.

He denies having any involvement, having told police he was at his mother’s address from 2pm until midnight, and said he did not own a phone.

The trial, expected to last until mid-March, continues.