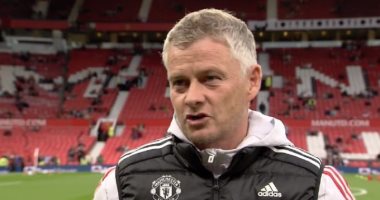 The Norwegian Ole Gunnar Solskjaer, coach of the Manchester United team, expressed his sadness for the fatal loss that the Red Devils received in the deadly time against his guest Aston Villa, with a clean goal in the match that brought them together this afternoon, Saturday, at Old Trafford, in the round matches. Sixth in the English Premier League for the 2021-2022 season.

“Obviously I am disappointed, because the goal of Aston Villa came from offside, it is unfortunate that this decision is against us,” Solskjaer said in his comments after the match.

Solskjaer added, “We had to slow down the game at times, but when you have very good strikers in the transition, sometimes the decision is hasty, we didn’t have enough control, even though we had 60% of possession.”

Solskjaer continued, “We missed the opportunity to take a point after the penalty was missed, but it is not normal for the Aston Villa players to surround Bruno Fernandes before the shot. There should have been penalties, but they got what they wanted.”

On Bruno Fernandes choosing to take the penalty, not the Portuguese star Cristiano Ronaldo, Solskjaer explained, “As for the decision of who takes the kicks, it is taken before the match, Bruno Fernandes is excellent at taking penalties, and Ronaldo scored a lot of penalty kicks before. Just a missed opportunity for us to take a point.”

And about facing Villarreal next in the Champions League, Solskjaer said, “It’s a big match, and we know that we started poorly in this group, so we will be ready.”