England players were booed by a section of fans as they took the knee ahead of their opening Euro 2020 match against Croatia at Wembley, despite impassioned pleas by the FA for support.

As was the case at the Riverside Stadium in England’s warm-up matches against Austria and Romania last week, some supporters made their feelings known on Sunday afternoon, with loud jeers echoing around Wembley Stadium, before they were drowned out by other supporters’ applause.

The boos came despite the Football Association begging the 22,500 supporters to get behind the gesture, saying it is not ‘aligned to a political organisation or ideology’ but is an act of ‘unity and fighting against inequality’. 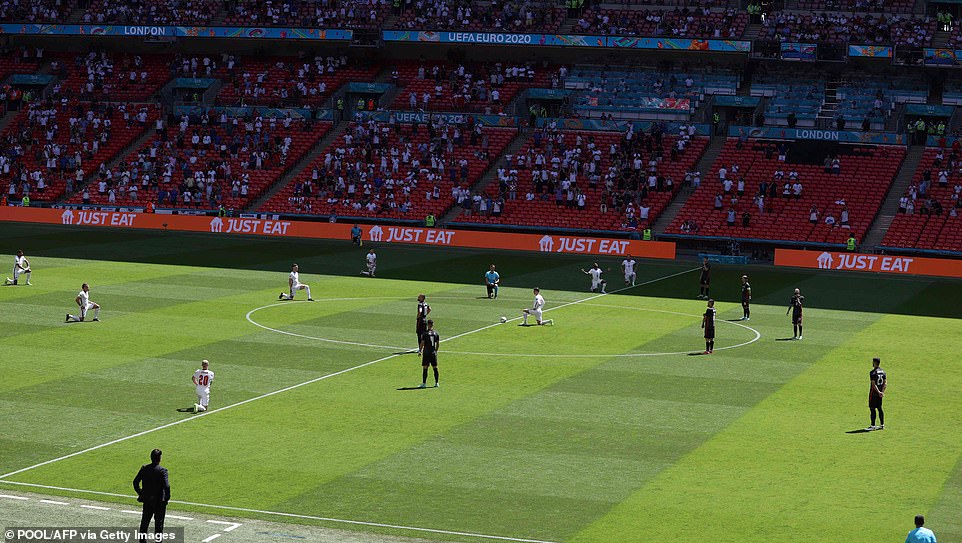 While England’s players knelt and Croatia’s players stood, boos were clearly audible on BBC1 ahead of the Euro 2020 match 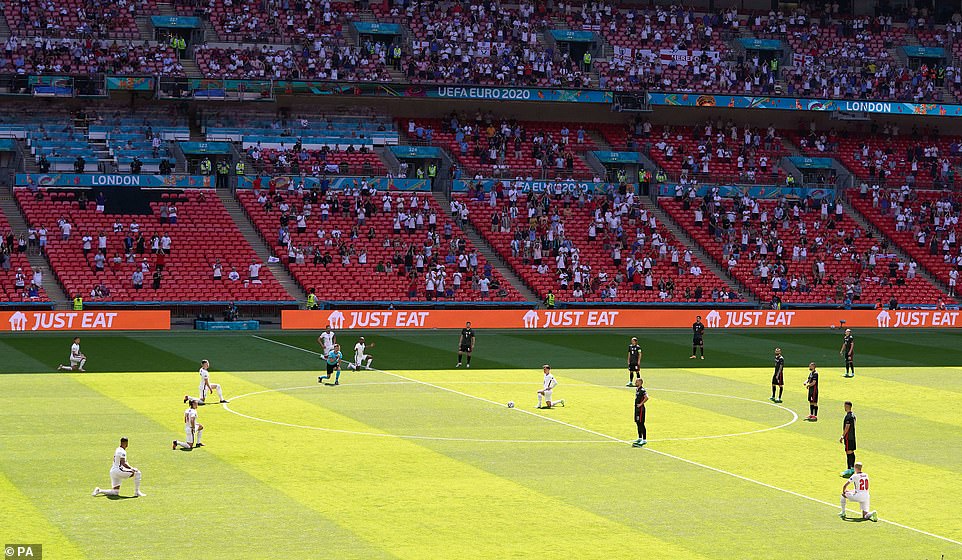 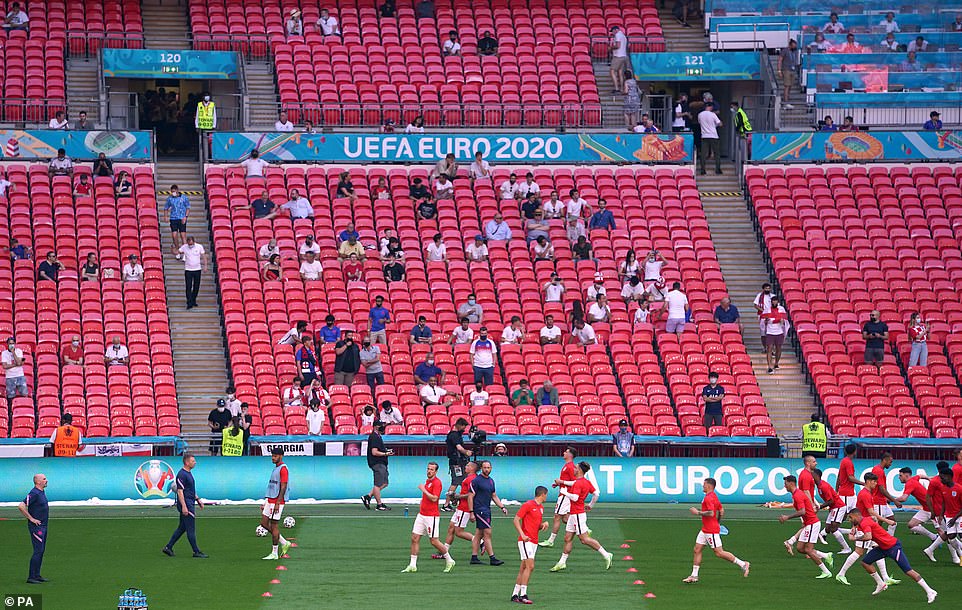 Before the game, the FA had urged England fans to get behind the players while they took the knee in an anti-racism gesture 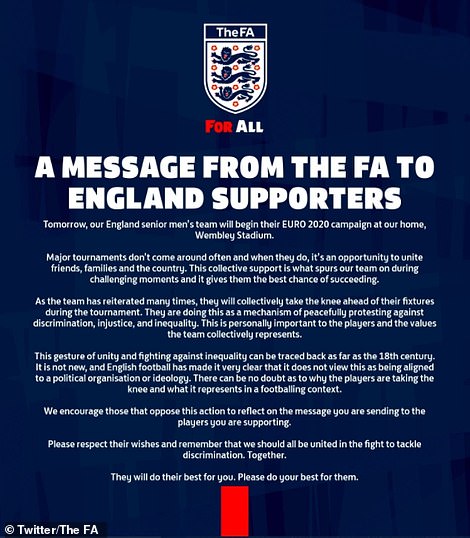 The FA released a statement on the eve of the match urging fans not to boo the players, but it didn’t change the outcome

There were also some cheers to be heard inside the stadium in north-west London, which helped to drown out the initial boos, clearly audible on BBC One where the game was being broadcast live to the nation.

England had already made it clear they intended to take a knee before every one of their matches at the Euros and a video and statement released on the eve of their first game urged fans to support them.

The statement insisted that taking a knee isn’t political and isn’t linked to the Black Lives Matter movement, but is simply a stand against discrimination in all its forms.

The FA statement read: ‘Tomorrow, our England senior men’s team will begin their EURO 2020 campaign at hour home, Wembley Stadium. Major tournaments don’t come around often and when they do, it’s an opportunity to unite friends, family and the country.

‘This collective support is what spurs our team on during challenging moments and it gives them the best chance of succeeding. As the team has reiterated many times, they will collectively take the knee ahead of their fixtures during the tournament.

‘They are doing this as a mechanism of peacefully protesting against discrimination, injustice and inequality. This is personally important to the player and the values the team collectively represents.

‘This gesture of unity and fighting against inequality can be traced back as far as the 18th century. It is not new, and English football has made it very clear that it does not view this as being aligned to a political organisation or ideology. 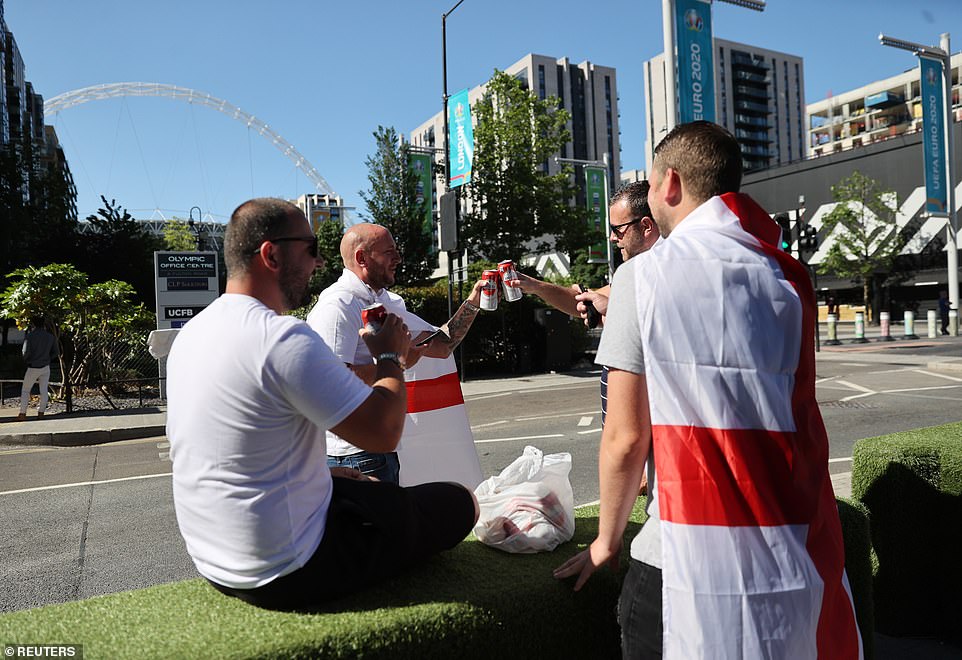 England fans gather outside Wembley ahead of the match. There is nothing to suggest those pictured booed the players. 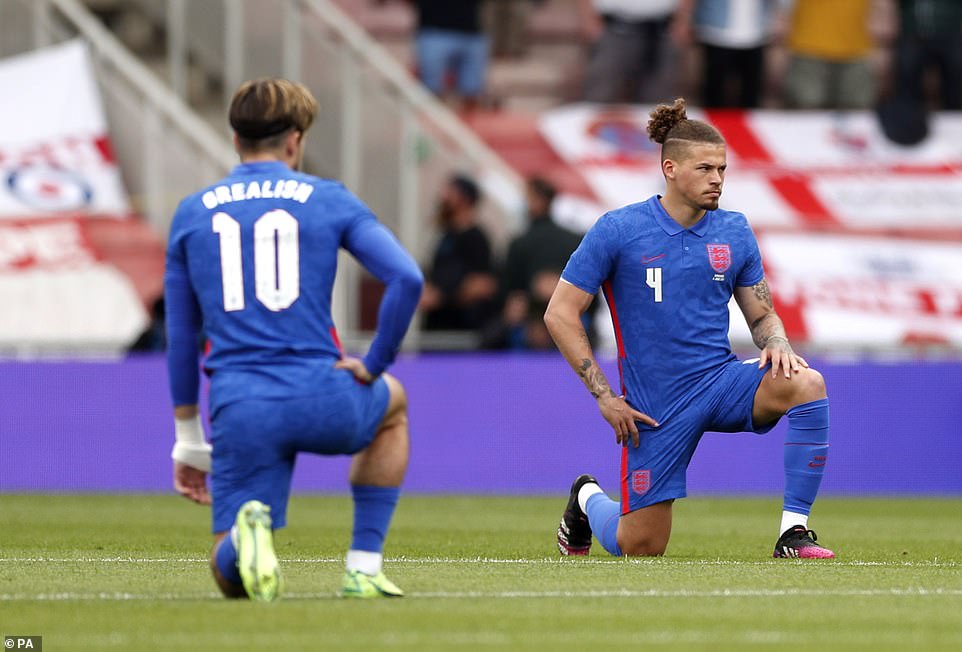 ‘There can be no doubt as to why the players are taking a knee and what it represents in a footballing context. We encourage those who oppose these values to reflect on the message you are sending to the players you are supporting.

‘Please respect their wishes and remember that we should all be united in the fight to tackle discrimination. Together.’

The FA received the backing of tournament organisers UEFA last week amid frustrations that the Government had refused to condemn fans who booed.

Ahead of the match, England boss Gareth Southgate had urged the fans not to boo the players when they took a knee 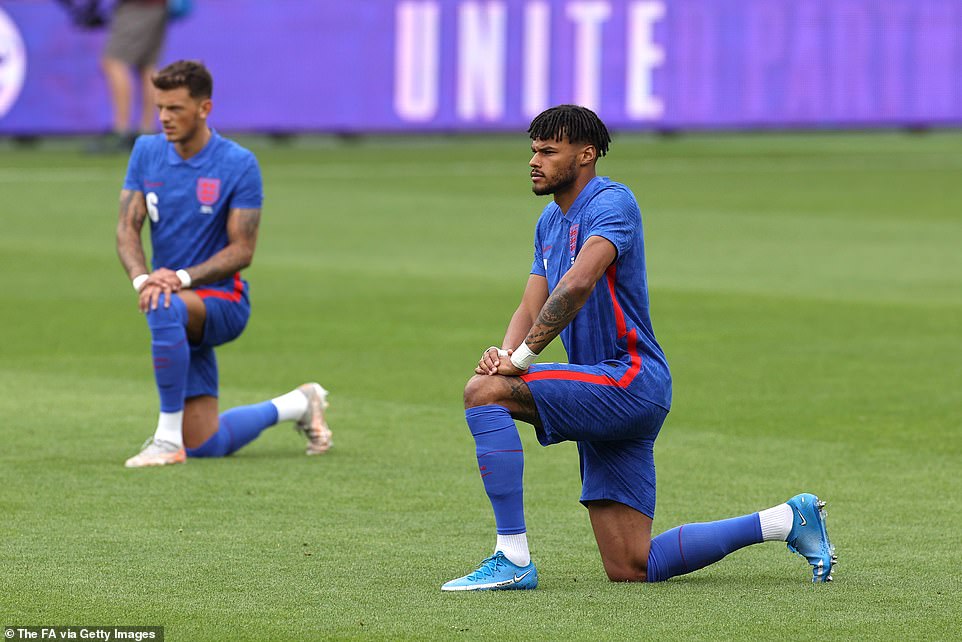 In addition to UEFA’s plea to fans, there were a series of messages displayed on the big screen at Wembley on Sunday condemning discrimination and asking for the players to be treated with respect.

‘UEFA has a zero tolerance against racism and any player who wants to demand equality among human beings by taking the knee will be allowed to do so,’ a UEFA spokesperson said.

‘We urge spectators to show respect for teams and players taking the knee.’

Chris Hemsworth one of 1,190 Australians on the Queen's Birthday honours list