Son of banker, 30, who was shot on the doorstep of his home in unsolved murder asks for answers

A son whose father was shot dead in one of the UK’s biggest unsolved murders has revealed he was killed halfway through reading him a bedtime story as he appealed for new evidence.

Andrew Wilson, 20, said his family deserve to know why bank worker Alistair Wilson, 30, was gunned down 16 years ago.

He spoke out today for the first time in the hope police will catch the murderer, who used an old WWII pistol to shoot his father dead on his doorstep.

Mr Wilson said has no memories of him apart from seeing him lying covered in blood at the family home in Nairn in the Highlands when he was just four on November 28, 2004.

He said: ‘Someone came to our family home on a Sunday evening while my dad was reading my brother and me bedtime stories after our bath.

‘The next thing I know I am looking at my dad lying in our doorway covered in blood. 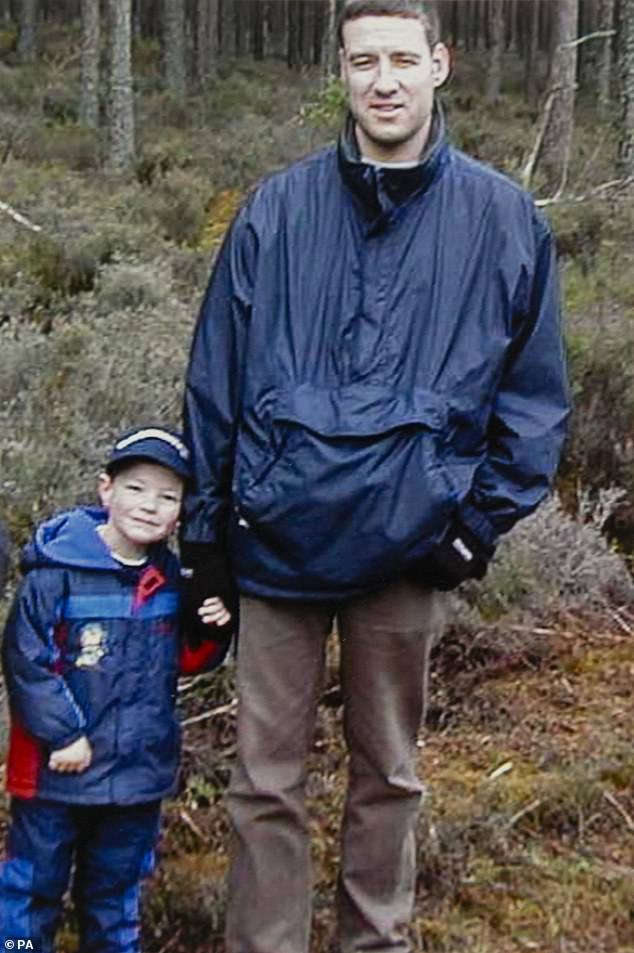 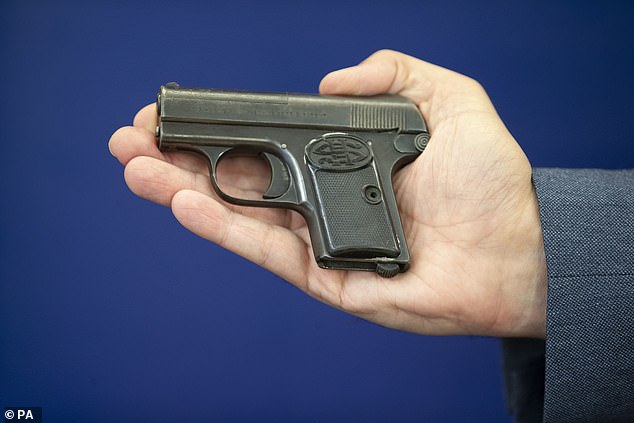 A replica of the gun, a WWII pistol, which was used in the killing of Alistair Wilson in 2004 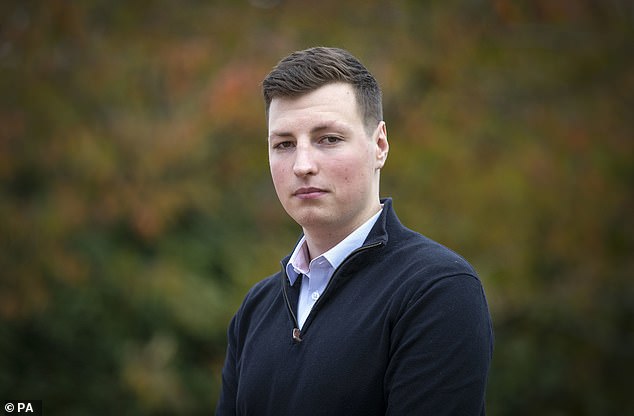 ‘I don’t really remember much, the only thing that I really remember is that I came down the stairs after it happened and saw my dad lying there and then in kind of all goes blurry and then I just remember being the back of a police car but that’s all I remember that night.

‘I have no memories of my dad at all – that’s the only image I have. I don’t know what his voice is like. I don’t really remember anything.’

Around 7pm that evening Alistair’s wife Veronica opened the door of the house on Crescent Road to a stocky man, aged 30-40, 5ft4in to 5ft7in tall, wearing a dark jacket and baseball cap who asked for him.

He spoke to the man and was handed an empty blue envelope with the word Paul written on it before going back inside to speak to his wife before returning to the door, where he was shot. 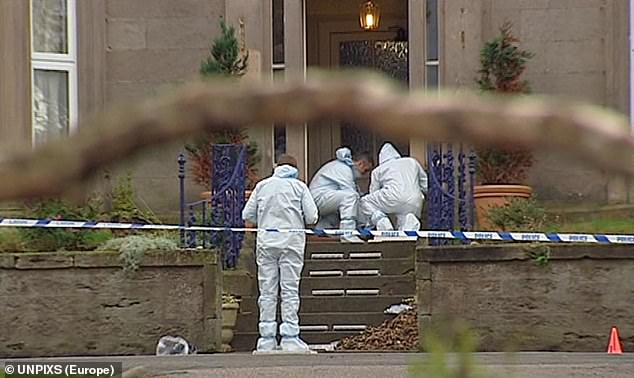 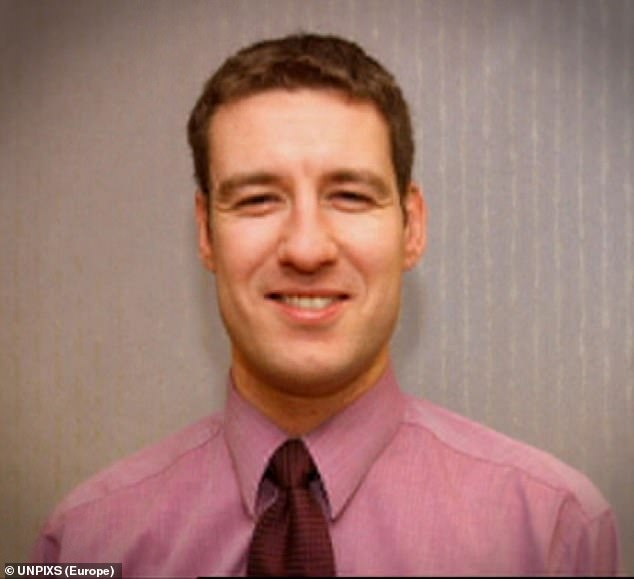 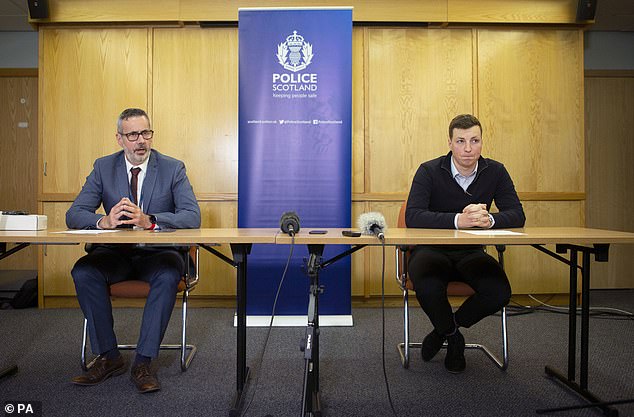 Andrew, who was four at the time, and is now 20, said: ‘I don’t really remember much, the only thing that I really remember is that I came down the stairs after it happened and saw my dad lying there and then in kind of all goes blurry and then I just remember being the back of a police car but that’s all I remember that night.

‘I have no memories of my dad at all – that’s the only image I have. I don’t know what his voice is like. I don’t really remember anything.

‘It’s that small town mentality – people recognise you, everybody knows. I’d be referred to as ‘the banker’s son’ and people would do a double take.

‘People blaming my mum – that’s the one thing I don’t understand. Police have ruled her out. If anyone listens to the 999 call that they released you can hear the emotion in my mum’s voice.

‘You can tell – I hate that recording, its the one thing I just can’t listen to – but you can tell. And I know my mum and she’s not a monster that she gets made out to be.

‘To see and speak to other people who have gone through the tragedy of losing their parents to didn’t feel alone any more and you had coping mechanisms.’

‘Anyone that knows something I urge them to phone up and say ‘this is what happened’.

‘I shouldn’t be having to stand here and ask people to tell me why my dad was killed. It shouldn’t be something I have to do.’

Alistair died later that evening in hospital and the antique gun was recovered from a drain near Mr Wilson’s home 10 days after his murder.

No one has been apprehended in connection with the murder and Police Scotland’s major investigation team continues to investigate the case.

Mr Wilson said: ‘I was four years old when this happened and my dad was only 30.

‘There would be no more bedtime stories, no more playing football or helping him in the garden.

‘My dad and I missed out on so many things together, showing me how to tie a tie, driving lessons and taking me for my first pint.

‘I am now a 20-year-old with little answers regarding my dad’s death.

‘For the last 16 years I have been left wondering why I didn’t have a dad like all my friends.

‘I still cannot believe how someone could shoot my dad dead on our doorstep while my brother and I were upstairs.

‘The only memory of my dad I’m left with is the image of him lying on the doorstep.

‘Photographs are all I have and no family should suffer the way we have all these years.’

He added: ‘I am appealing on behalf of my family to anyone who may have any information, no matter how big or small to please come forward.

‘Someone out there could have the missing piece of information.

‘Nothing can bring my dad back but knowing who did this and why could give us the closure we need.

‘Any information could be crucial to our case.’

He hopes his appeal will lead to someone coming forward.

‘I know whoever did it will receive justice and I’ve got 100% faith in that.

‘Someone out there knows something. 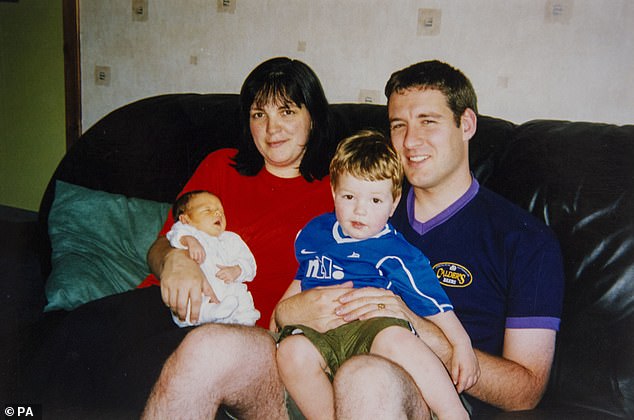 Alistair Wilson with wife Veronica, and two young sons at their home in Nairn, near Inverness

‘I hope anyone out there who knows comes forward now after seeing this.’

Police also revealed new information about the ammunition used in the murder, 0.25 calibre bullets which are said to be manufactured in the 1980s or 90s.

The gun was a Haenel Suhl pocket pistol from the 1930s which police believe is likely to have been taken to the UK as a souvenir after the Second World War.

Detective Inspector Gary Winter, of the major investigation team, said: ‘Do you know of anyone who had a similar pocket pistol?

‘The blue envelope handed to Alistair by the killer had the name Paul on it, which may or may not be relevant.

‘Does this mean anything to you in the context of this investigation?

‘Lastly, do you know any other person by the name Alistair Wilson, who may have been the intended target of violence or retribution to any extent?’

He added: ‘Alistair’s killer would now be approaching his 50s or 60s and has enjoyed a life denied to his victim and his family.’

Mr Winter hopes the appeal will be a ‘vital reminder’ it is never too late to come forward with information, and added: ‘We remain committed to ensuring the person responsible for Alistair’s murder is brought to justice so that we can give his family the answers they deserve.’

Anyone with information is asked call police on 101 or email SCDHOLMESAberdeen@scotland.pnn.police.uk.

Working from your bed? You're not alone. Mattress sales are soaring during the pandemic.