South Africa snatches a fatal victory from Ghana in the World Cup qualifiers with the participation of Tao .. Video 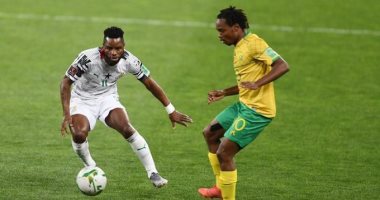 The South African team, led by Percy Tau, the new Al-Ahly player, snatched a fatal victory from his Ghana counterpart, 1-0, during the meeting that brought the two teams together this evening, Monday, in the second round of the African qualifiers for the World Cup Qatar 2022, where Tao participated in the first against Ghana in the second His matches with South Africa in the ongoing qualifiers, after a goalless draw with Zimbabwe.

Tao participated in the starting lineup of the match until the 77th minute, and the new Al-Ahly player scored a goal for his country in the first half, in the 37th minute, with a header against the Black Stars, but the referee canceled it for offside..

The only goal of the match came at the 84th minute of the match, through player Hlongwan.

With this result, South Africa leads its group with 4 points, while Ghana’s balance stops at 3 points in second place in the group.

In the first round of the African qualifiers for the 2022 World Cup in Qatar, South Africa tied with Zimbabwe without goals..

South Africa is competing in Group G of the African qualifiers for the 2022 World Cup in Qatar, with Ghana, Zimbabwe and Ethiopia, respectively.