Investigators probing the killing of South Africa‘s football captain Senzo Meyiwa in 2014 are seeking phone records from his singing star girlfriend amid claims she was involved in hiring ‘hitmen’, it has emerged.

Five men have been charged with Meyiwa’s murder six years almost exactly after he was gunned down at the home of his girlfriend Kelly Khumalo in October 2014.

While his death was treated as a botched armed robbery at the time, one investigator hired by the family now says the killing was an ‘assassination’.

Prosecutors now want access to ‘cell phone records of Kelly Khumalo indicating her communication with the accused’, according to a document leaked to South African media. 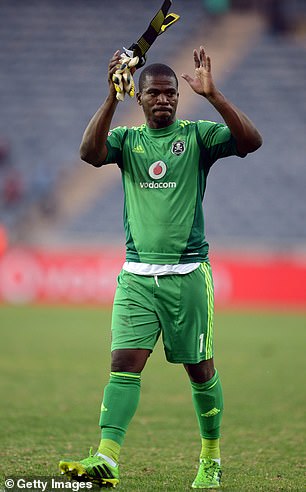 The leaked document, seen by The South African among others, also refers to a ‘lender’ who allegedly sent money to Khumalo, ‘ostensibly to pay hitmen’.

‘It was previously mentioned that there was a lender who advanced money to Kelly Khumalo, ostensibly to pay hitmen, and that this lender was pestering her for the repayment of this loan,’ the document says.

Prosecutors have said that the document was leaked to South African media by mistake but did not deny its accuracy.

Khumalo, 35, has previously spoken on South African television about being ‘labelled as a killer’ amid suspicion about her involvement.

‘Society has taken my loss and used it against me,’ she said in an episode of Life With Kelly Khumalo in August this year.

‘How can people who don’t know me and who have never met me think like that about me or my journey?’ she asked.

Police Minister Bheki Cele said the five suspects had been detained on Monday – six years to the day after the goalkeeper was killed.

On Tuesday, they made their first appearance at the Boksburg magistrate court, east of Johannesburg.

According to court documents they were charged with murder, attempted murder – Khumalo’s sister was also shot, but survived – robbery with aggravating circumstances, and possession of unlawful firearms and ammunition.

Four of the five accused refused to step into the dock, refused legal assistance and insisted on their innocence. 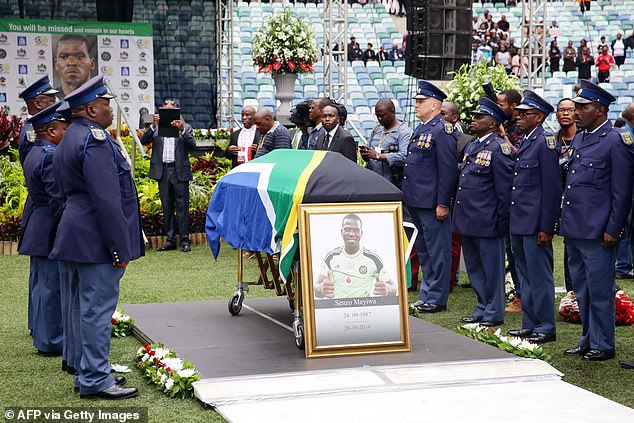 A fifth man, 30-year-old Bongani Sandiso Ntanzi from Rustenburg in the North West province, was represented by his lawyer.

Police had until this week failed to find the alleged killers, who reportedly escaped on foot, and authorities had been accused of incompetence over the case.

‘Now we can perhaps get answers to all the questions that we have had,’ he said.

At the time of the killing, officials said Meyiwa had died while trying to protect Khumalo from armed intruders.

The supposed burglars were said to have demanded phones, money and other valuables, and pointed a gun at Khumalo.

Before the recent breakthrough, the footballer’s family had approached private prosecutor Gerrie Nel in the hope of securing justice for Meyiwa.

Nel told News24 this week that he believed there was a ‘mastermind’ behind the killings, saying it was not a robbery but an ‘assassination’.