South Australia is set to close its borders to Greater Melbourne from midnight in response to an outbreak of Covid-19 at a quarantine hotel.

A worker and a former resident who left the facility on Sunday have since tested positive, bringing the total number of cases up to eight,

The lockout is scheduled to come into effect from midnight on Wednesday, although authorities say they are yet to make a final call on whether to proceed. 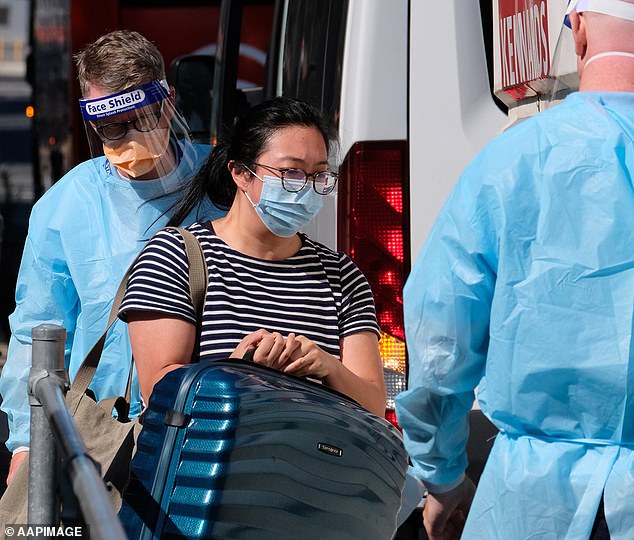 Pictured: Quarantining hotel guest at the Holiday Inn near the Airport are moved to a new location in Melbourne on Wednesday, February 10 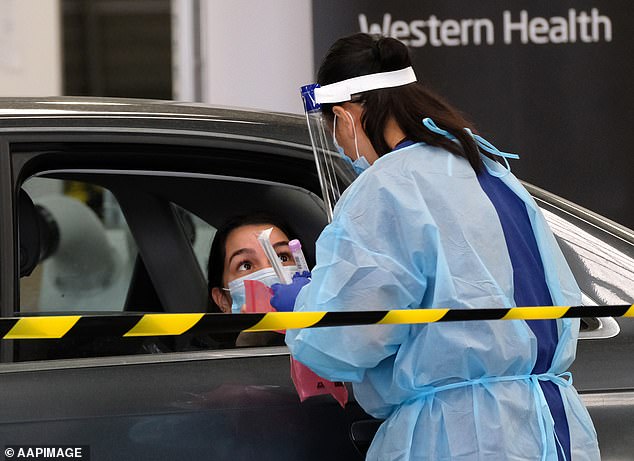 Returning SA residents, people relocating and other exempt travellers would still be allowed in but would need to quarantine for 14 days.

‘We are giving people to who are proposing to travel to South Australia as much warning as possible,’ said Police Commissioner Grant Stevens.

‘I am forecasting that it is likely to occur and warning people on that basis.’

The final decision on weather the borders will close will not be made until further advice from SA Health and Victoria later on Wednesday.

Regional Victorians and cross-border communities will not be affected.

The three cases at the Holiday Inn were likely linked to a floor with known Covid-positive guests – including a family of three.

Victoria’s Chief Health Officer Brett Sutton said it’s suspected the source of the transmission was a nebuliser – a machine used to change liquid medication into a vapour that can be inhaled. 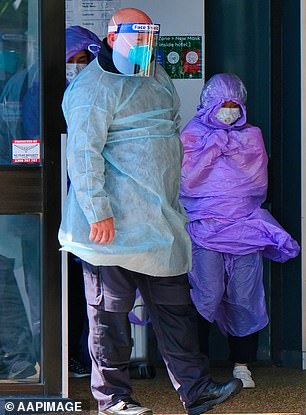 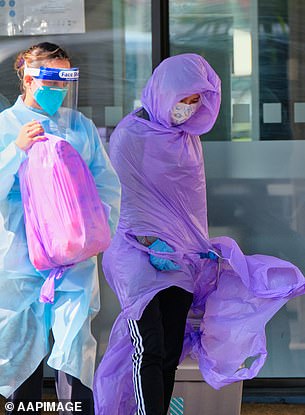 ‘[The theory is] these three cases are related to an exposure event that involved a medical device called a nebuliser and it vaporises medication or liquid into a fine mist,’ he told reporters.

‘That mist can be suspended in the air with fine particles. We think the exposures are to that event, this nebuliser whereby the virus was carried out into the corridor and exposed the authorised officer, the food and beverage service worker and also the other resident.

He said health officials needed to continue to investigate every intervention possible to better protect hotel quarantine workers and guests.

‘All I can say is bring on the vaccine,’ he said. 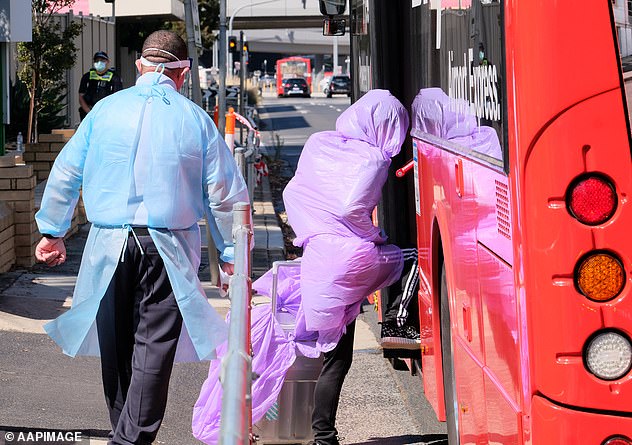 Returned travellers from the same floor as the woman who left quarantine on Sunday must now go into isolation for another 14 days. Staff who worked on it will follow suit.

Meanwhile, two schools in Melbourne’s northwest have been shut down after seven nearby venues were listed as hotspots.

People entering SA are currently required to get three coronavirus tests if they come from Greater Melbourne in Victoria, Greater Sydney, Wollongong and the Central Coast in NSW and Perth, Peel and the southwest in Western Australia.

The only exception is people who attended the Grand Hyatt Hotel in Melbourne between January 21 and 31, who must quarantine for 14 days.

February 7 – A woman in her 50s working in hotel quarantine at the Holiday Inn Melbourne Airport recorded a positive test for the highly contagious UK Covid variant.

It is not known how she contracted the virus with authorities claiming no protocol breaches were found on CCTV.

– A second infection was also recorded on Tuesday with a woman who had left hotel quarantine on Sunday returning a positive test.