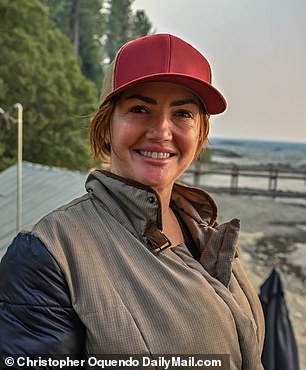 Ash falls from a sky so heavy with smoke that the town of South Lake Tahoe sits in permanent twilight.

The streets, houses, restaurants, and stores are all deserted. Boats bob on the empty lake that would have been thronging with tourists enjoying Labor Day weekend and the sun burns red above.

But unlike her neighbors, Kara Sullivan is going nowhere.

Looking out over the scene from her waterfront property on the edge of town, the 48-year-old remains defiant in the face of the wildfire evacuation order that has seen more than 22,000 residents flee in the past two days.

Speaking to DailyMail.com Sullivan said: ‘I’ve lived here since I was 18 years old and I’m not going anywhere.’

Sullivan, who owns Tahoe Lifestyle Vacations, admitted that for all her bravado the past few days have been stressful and worrying.

‘A couple of days ago it was a little stressful. Everyone was freaking out; everyone was scrambling to get all their stuff and get out,’ she said.

‘It’s really hard to think that the hikes that I’ve walked for years up at Desolation Wilderness are burning and who knows what it will look like when they finally put this fire out. But I just don’t want to leave.’ 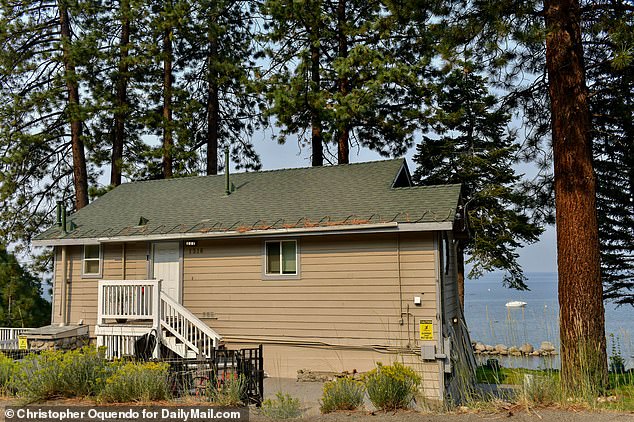 Sullivan told DailyMail.com she has lived at her waterfront property (pictured) for 30 years and does not want to leave it behind 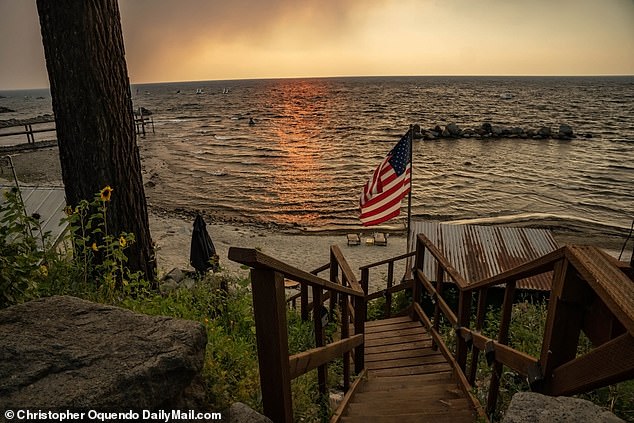 If the time does come to evacuate, she plans to sail to the other side of the lake on her boat docked outside her home (pictured) she says 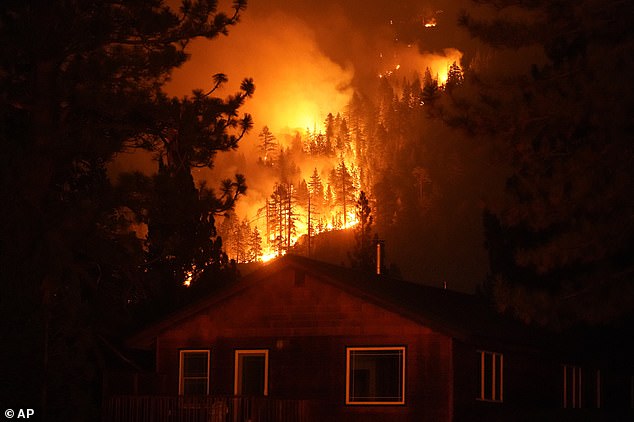 Sullivan, whose brother-in-law is a California firefighter, says she has been monitoring the situation, ‘almost minute by minute’ and despite the dire warnings issued earlier this week she’s refusing to budge and remains confident in her decision.

She admitted that family and friends have asked her to leave and that she has considered quitting her home for their sake.

But, pointing out across the water she said: ‘That’s my boat out there. If it comes to it, I’ll get in that boat and sail across to the other side of the lake!’

‘I really don’t think the fire is going to make it here. The firefighters are doing an incredible job and I think South Lake Tahoe will be fine,’ she added.

Certainly, the resort town seemed to get a reprieve of sorts late Wednesday when firefighters expressed relief that wind gusts that have hampered their efforts to tamp down the blaze had not pushed it closer to homes.

But by Thursday morning, the Caldor Fire had engulfed 210,259 acres according to Cal Fire’s own website having been active for 19 days.

It continues to burn across two counties – El Dorado and Amador – with just 25 per cent of the inferno contained.

Brian Long, 22, has been a firefighter for four years and is a Dozer Boss in charge of one of the hundreds of teams carving out a secondary line around South Lake Tahoe in a desperate bid to shore up the frontline efforts. 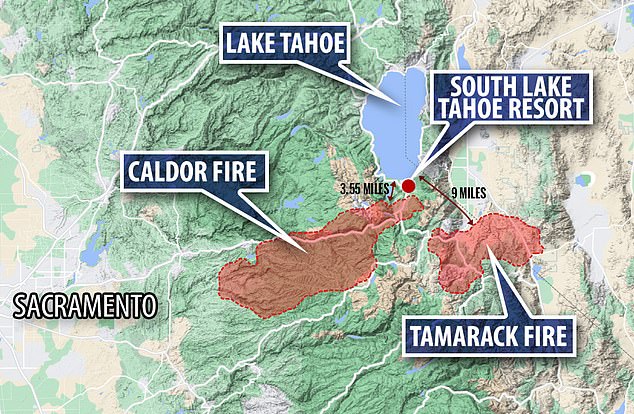 Fire officials dealt with a two-week old blaze they said was ‘more aggressive than anticipated,’ and continued to edge toward the pristine waters of Lake Tahoe which sits on the California-Nevada border. Now, they are trying to steer the Caldor fire into the Tamarack Fire 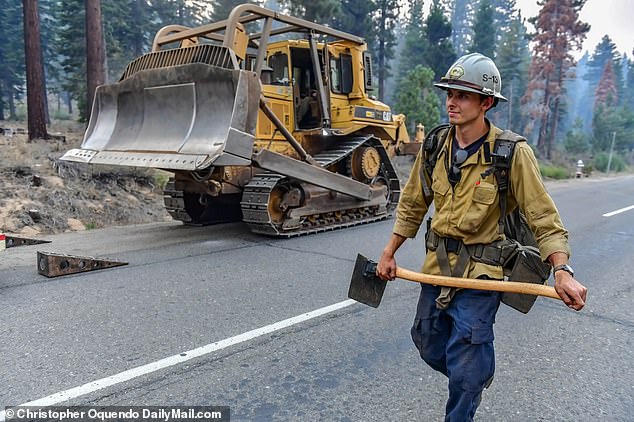 Brian Long, 22, a four-year firefighter, is a Dozer Boss in charge of one of the hundreds of teams carving out a secondary line around South Lake Tahoe in a desperate bid to shore up the frontline efforts 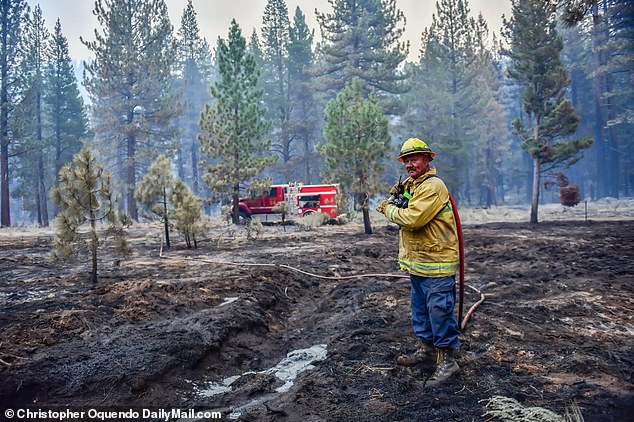 Virgil Myers (pictured) and his men are in the shadow of that front line, hosing down hotspots near Echo Lake, barely three miles south of South Lake Tahoe

He told DailyMail.com: ‘We plan out a good line so that we can protect structures – houses and so on – and we make a fire break. We push the ground and soil and trees and everything back so that there’s just bare mineral soil left.’

The one he and his crew were working on was ‘four blades wide,’ he said, and the hope is that, should the fire make it this far – the very outskirts of the town – it would not jump and flare up beyond it.

‘We’re kind of carving out a secondary line around several little towns – kind of like a catcher’s mitt,’ he said.

Virgil Myers and his men are in the shadow of that front line, hosing down hotspots near Echo Lake, barely three miles south of South Lake Tahoe.

He told DailyMail.com: ‘This was all burning yesterday, and you think it’s out but be careful where you stand. The roots are still burning, and you step in the wrong place you step in a three- or four-foot hotspot that’s a hole and you’ll fall right in.’ 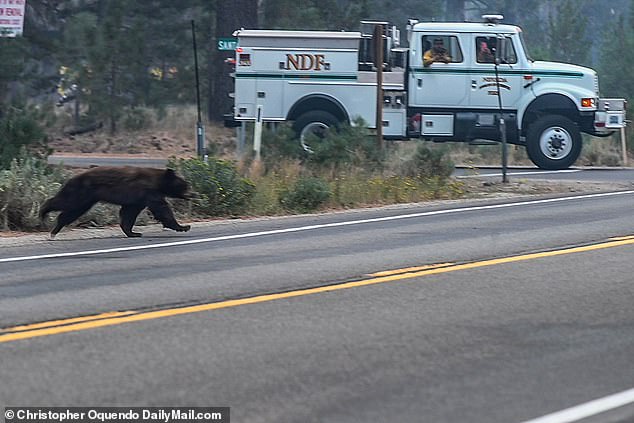 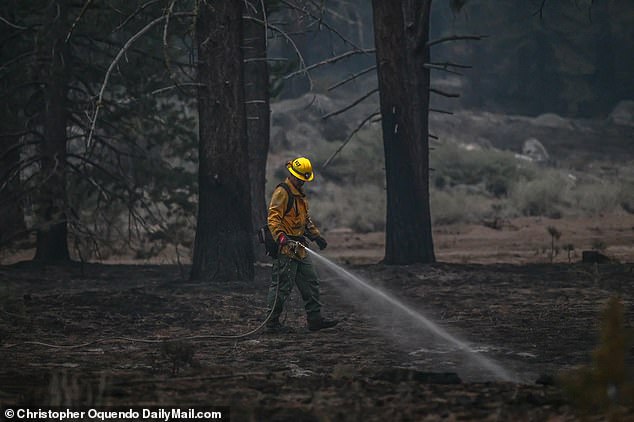 The Caldor Fire has now scorched more than 207,931 acres and is just 23% contained as it burns southeast of Lake Tahoe

As he spoke, he aimed his hose at the scorched and still smoking earth. Pockets of fire flared up behind him and embers fell from the trees.

‘We’re doing this because of the proximity of the houses,’ he said.

A residential neighborhood of pretty Hansel and Gretel-like houses sat directly across the road from where Myers worked.

Abandoned like so many of the little towns and neighborhoods, decks sit empty and doors and windows shuttered up while the occupants pray that they have homes to return to when their nightmare is over.

As Myers spoke a bear lolloped out of the forest, in front of a fire truck and across the road, disappearing between the houses.

The 1-50 that leads into South Lake Tahoe is almost entirely shut off with stretches of it unsafe due to falling trees and rockslides.

The towns are eerily quiet and the fire, with its flare ups and the cracking of falling trees, echoes across the empty stretches of road. 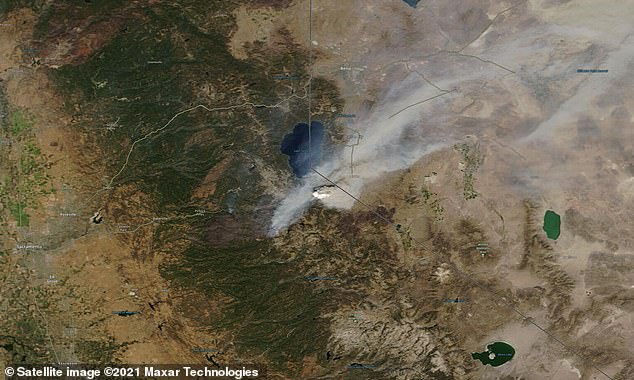 The Caldor wildfire is seen above from a satellite in space. It continues to approach the southern edge of Lake Tahoe 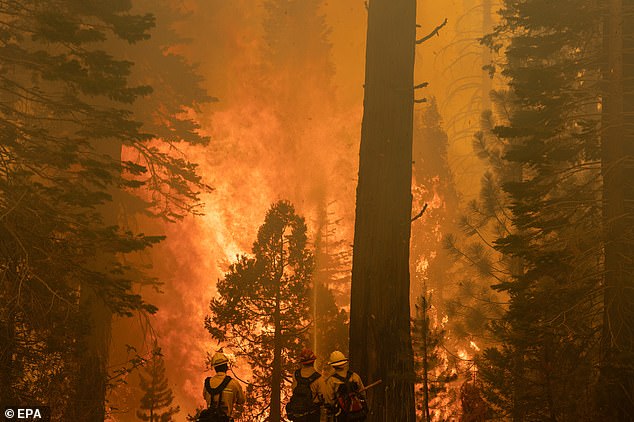 The fire has burned over 191,000 acres, destroyed more than 700 structures and prompted authorities to order the evacuation of the city of South Lake Tahoe

Firefighters Lane Bennett, 23 and Sam Huettinger, 27, are based in North Lake Tahoe and just two of the thousands of men and women drafted in on this effort.

Covered in soot and clearly exhausted the men joined their fellow firefighters lining up in the dark for a dinner of barbecue ribs and mac and cheese as well as pizza and fruit and muffins. Others worked into the night.

They spoke to DailyMail.com as they stood in the chow line at Lake Valley Fire Department just outside South Lake Tahoe.

According to Huettinger: ‘We’ve been working 16-hour shifts – so pretty regular for us. Our day starts at 6am and we just push through.’

The men had been battling the fire at Echo Lake, Wednesday. Bennett said, ‘It was pretty active there, but we had a good line and good control and structure with trucks in there.’

None have any idea how long they will be called on to fight this fire but, Bennett said, that is not his concern, ‘We just keep going, doing what we do till it’s done.’