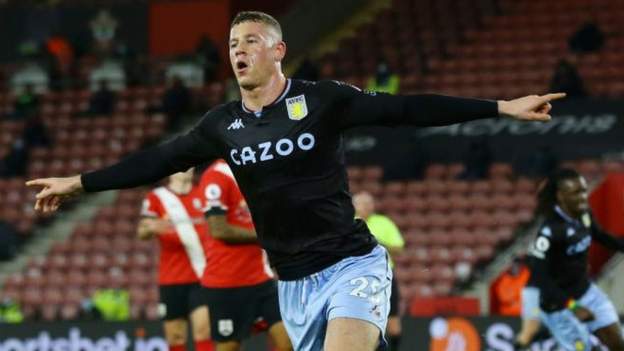 Ross Barkley headed the winner as Aston Villa reignited their European hopes with victory over Southampton in the Premier League in an entertaining tussle at St Mary’s.

The midfielder guided Jack Grealish’s cross beyond goalkeeper Alex McCarthy before the break as Villa bounced back from defeat at Burnley.

Villa keeper Emiliano Martinez produced a great save to deny Che Adams with 20 minutes remaining, while Matty Cash cleared off the line late on as Southampton failed to make their pressure count.

Danny Ings then had the ball in the net in added time but the striker was flagged offside.

Saints were earlier denied a penalty when Stuart Armstrong’s effort struck Cash on the arm but was deemed to have deflected off the defender’s thigh.

Victory sees Dean Smith’s side climb to eighth, but with a game in hand on many of those above them.

Southampton, who have now lost three league games in a row, remain 11th.

For all Villa’s entertaining attacking football this season, this was a victory in which the visitors had to dig in and, at times, ride their luck.

Smith’s side had already surpassed their best points tally at the halfway stage of a Premier League campaign since 2009-10, when they finished sixth, and have now won more games in the competition in half a season than they did in the whole of the last one.

It needed the creative spark of talismanic captain Grealish and the reactions of goalkeeper Martinez to earn three points that move them back within touching distance of a European spot.

Grealish’s hooked cross for Barkley’s headed winner was his ninth assist in the league this season, with only Tottenham’s Harry Kane (11) and Manchester City’s Kevin de Bruyne (10) having made more.

Villa’s failure to kill off the game at Turf Moor in midweek cost them against Burnley, but this time the visitors’ goalkeeper kept them in the fixture.

Martinez has been superb since arriving from Arsenal and kept his 10th clean sheet of the season thanks to a number of fine stops.

He denied Adams from close range and then pulled off a double save following a Southampton corner late on which Cash eventually cleared off the line.

The Argentine was finally beaten by Ings in added time but the Southampton striker was narrowly offside.