Wooden satellites that burn up completely on atmospheric re-entry — without releasing harmful aluminium-rich particles — are being developed in Japan.

The major component in today’s satellites is aluminium — which, when broken down by the force of re-entry, releases long-lived aerosols that damage the ozone layer.

Researchers from Kyoto University have joined forces with Sumitomo Forestry to explore the potential for wood to be used in the extreme environment of space.

Not only would wooden satellites be better for the environment, but they could also allow for new and simpler designs if used to make a craft’s outer shell.

This is because electromagnetic signals pass more easily through wood — meaning that antennas could be placed within, rather than outside, the satellite body.

The Japanese team of experts have said that they hope have their first wooden satellite ready to launch into space by the year 2023. 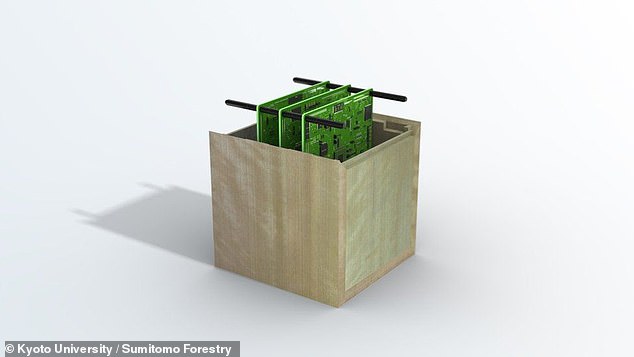 At present, space satellites are typically made up of aluminium and its alloys — as the metal is relatively cheap as well as being lightweight and durable.

Aluminium-based components have the benefit of being able to withstand both extremes of temperature and bombardment by space radiation.

Having reached the end of their lives, however, these satellites face one of two fates.

Either they can be left in orbit — adding to the thousands of pieces of ‘space junk’ around the Earth, and may become a hazard to other satellites and rockets — or they can be ‘de-orbited’ into the Earth’s atmosphere to burn up some 50 miles overhead.

However, recent studies have concluded that destruction by re-entry may not be as safe as once thought — with the aluminium used in satellites found to break apart and form thousands of tiny particles of ‘alumina’, or aluminium oxide.

‘We are very concerned with the fact that all the satellites which re-enter the Earth’s atmosphere burn and create tiny alumina particles,’ engineer and former astronaut Takao Doi of Kyoto University told the BBC.

These particles, Professor Doi explained, ‘float in the upper atmosphere for many years. Eventually it will affect the environment of the Earth’

Alumina acts to reflect incoming sunlight back out of the atmosphere into space, giving it a slight cooling effect — but also provides a reactive surface which can break’s down the planet’s ozone layer.

Building the structural components of a satellite out of wood, in contrast, would not release such environmentally damaging compounds on re-entry.

The research will begin with the testing of various types of wood and treatments under extreme environments on Earth, to find the best combination for space.

Sumitomo Forestry have said that they will be focusing on developing wooden materials that are especially resistant to harsh sunlight and temperature changes.

Officials described this project to the BBC as being an ‘R&D secret’.

US Africa Command: Conducting mission exercises for B-52 strategic bombers